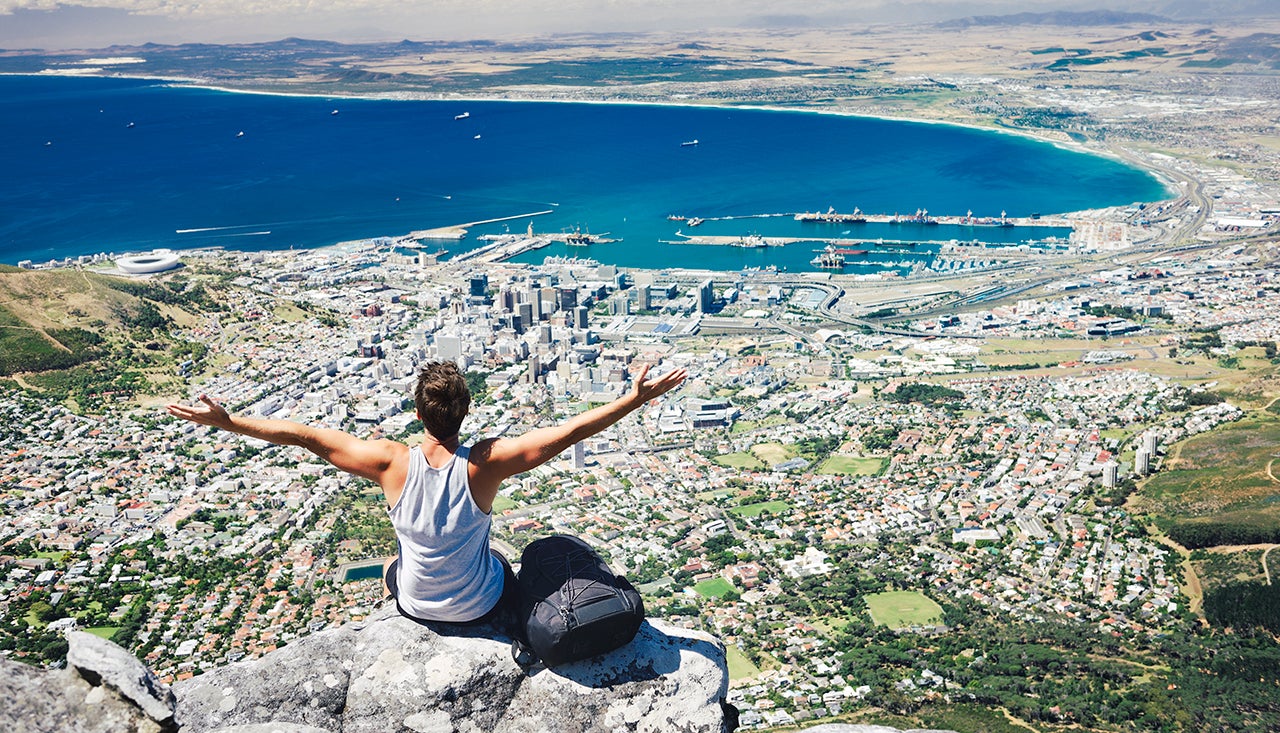 Whether you call them essential strands of the urban fabric or magic mountains, it's hard to imagine some cities without their signature summits. And while many owe their raison d'être to a natural feature of the landscape, be it a river or proximity to a natural harbor, there's something to be said for the power of a peak. Think of Rio de Janeiro's epic outcropping, Sugarloaf Mountain, or how gazing down from Hong Kong's Victoria Peak makes skyscrapers look like gleaming thickets of toys.

These summits, along with a handful of others around the world, are not to be missed — which is why we've rounded up 10 of the most epic. The one thing these mighty mounds have in common? All offer easy escapes from the urban commotion without having to go too far — except upward, of course. We've even included a few surprise summits here, too. (Paris? Mais oui!) With that in mind, traveler, elevate thyself.

Magnificent is the word that comes to mind when describing Table Mountain, or Hoerikwaggo as it's known in Khoekhoe, the language originally spoken in these parts. At an elevation of some 3,558 feet, it's certainly the world's most famous flat-topped mountain. From the high, two-mile wide plateau, the views over Cape Town's Table Harbour Bay and Robben Island are simply ravishing. The varied terrain puts great hiking opportunities within easy reach of the city center, while a ride up the Table Mountain Cableway lets engineering do the heavy lifting. Either way, you're bound to come across rock hyraxes, or dassies, ambling about the craggy surfaces on the summit. They are related to elephants, though much smaller and furrier (resist the urge to pet them, though rare is the dassie to refuse a photo.)

Flying down to Rio? Then you won't want to miss a visit to one of the most iconic sites in the southern hemisphere, Pão de Açúcar, the famed Sugarloaf Mountain. While it's true that famed Rio beaches like Copacabana and Ipanema provide easy respite from the din of the city, the views over Guanabara Bay, the Atlantic and the city itself from the top of the 1,299-foot peak seriously slay (arguably more so than from the vista of the taller Corcovado, west of the city center). The glass cable cars glide up to the top every half hour between 8:00am and 9:00pm; before you take the ride up, you probably don't want to watch this.

When you consider great cities of the world with singular summits, Hong Kong's lush Victoria Peak almost instantly comes to mind. This 1,811-foot tall mountain is almost as much a civic signature of the teeming metropolis as the city's Victoria Harbour, which writer Jan Morris has called "one of the great mercantile waterways of the world." From the Sky Terrace 428 observation platform, you can view the maritime activity in motion just beyond the forest of skyscrapers. Speaking of which, thanks to an optical illusion on your ascent via the funicular railway known as the Peak Tram, the towers on the right seem to lean into the mountain. Take a nature walk through the tropical forest before taking the tram back down to St. John's Cathedral.

As the resort city of Palm Springs has evolved from sleepy desert oasis to hipster haven over the years, one thing has always remained constant: the regal summit of Mount San Jacinto, which forms a 10,834-foot backdrop to the town. Thanks to the Palm Springs Aerial Tramway, you can make the journey up to Mountain Station (that's 8,516 feet up) in just 10 minutes. From the observation decks (or two restaurants), you can take in sweeping views of the entire Coachella Valley as well as the San Andreas Fault. There are plenty of hiking trails, too, and remember it's generally 30 to 40 degrees cooler at the top of the tram than on the desert floor below.

It's that "other" mountain in Athens ... you know, the one without the Parthenon on top. In fact, at 909 feet, Mount Lycabettus is more than 400 feet higher than the Acropolis, as well as arguably the best place in the city from which to have the best view of it. This limestone finger, richly verdant with pine trees and Mediterranean flora at its base, is said to be the creation of Athena herself. It very conspicuously juts up from the Athenian basin, inviting exploration that you can do three ways: by car, hoofing it to the top or taking the funicular from Aristippou Street in the hilly (as you might expect) Kolonaki neighborhood. Mix nature with nourishment: There's both an informal cafe and fancy restaurant at the top.

Montreal without its Mont-Royal would be like New York without its harbor; in other words, difficult to imagine. Originally, a Mohawk trading post clung to the side of this 700-foot high slope (actually a glacial deposit) rising from the plains. Met by the locals in the village of Hochelaga in 1535, Jacques Cartier claimed the mountain all for King Francis I. While much of the southern slope has long since been urbanized, there are still some 500 acres of pristine park space at the top. That sylvan splendor is largely due to the American landscape wunderkind Frederick Law Olmsted — you know, the guy who designed Central Park.

It would be a stretch to call it a mountain, but it's arguably the most legendary city butte in the world: Montmartre rises 430 feet, making it the highest natural spot in Paris. For the ancient Romans it was the Mount of Mercury, even putting a temple to the god on the top, conferring mythic status on this spot straight out of the gate. Although some of the most iconic places in Paris are here, like the Basilique du Sacré-Cœur and (for many) the no less holy Moulin Rouge, Montmartre has always felt like a neighborhood apart. Its Belle Epoque artistic heritage looms perhaps even larger than the white dome of the Sacré-Cœur church (which itself juts up 273 feet from the top of the butte). Exploring Montmartre involves a lot of steps, but if you take the funicular from the foot of the butte to the top, it'll save you clambering up some 300 of them. The journey takes 90 seconds and costs the same as a metro ticket.

The clifftop edge of the volcanic caldera on which Fira is perched may not fit your ordinary conception of what a mountain is, but then there is nothing ordinary about the Greek island of Santorini. The whitewashed buildings of the bustling island capital are perched more than 1,300 feet above the cobalt blue water of the caldera itself — much higher up than the village of Oia at the northern tip of the caldera. Grab a pair of good walking shoes and take the scenic half-hour walk along the clifftop footpath to the village of Imerovigli. Then chill out Cycladic-style at La Maltese Buddha Bar.

The Diamond Head crater on the Hawaiian island of Oahu is as emblematic of Honolulu as Waikiki Beach, where you get the classic view of what is actually a 300,000-year-old volcanic tuff cone. Those who can pull themselves away from the beach to get a closer look might consider taking the hike up to the top of the crater rim, at 762 feet. Though the actual hike is less than a mile, Hawaii State Parks emphasizes that parts of the trail are uneven and that there are 99 steps toward the end. But once you take in those Pacific views — properly hydrated, of course — you'll think of it as a stairway to an aloha state of mind.

It's easy to forget that with more than one million people, Phoenix is now America's most populous state capital — but gazing down at the sprawl from Camelback Mountain serves as a lovely reminder. This city mountain really does resemble a kneeling camel whose hump just happens to rise to 1,334 feet. Two steep hiking trails lead to the peak, but when summertime temperatures soar (and drinking water very frequently is a must) it might be better to behold this rocky beast from the comfort of a funky hotel like the Valley Ho.