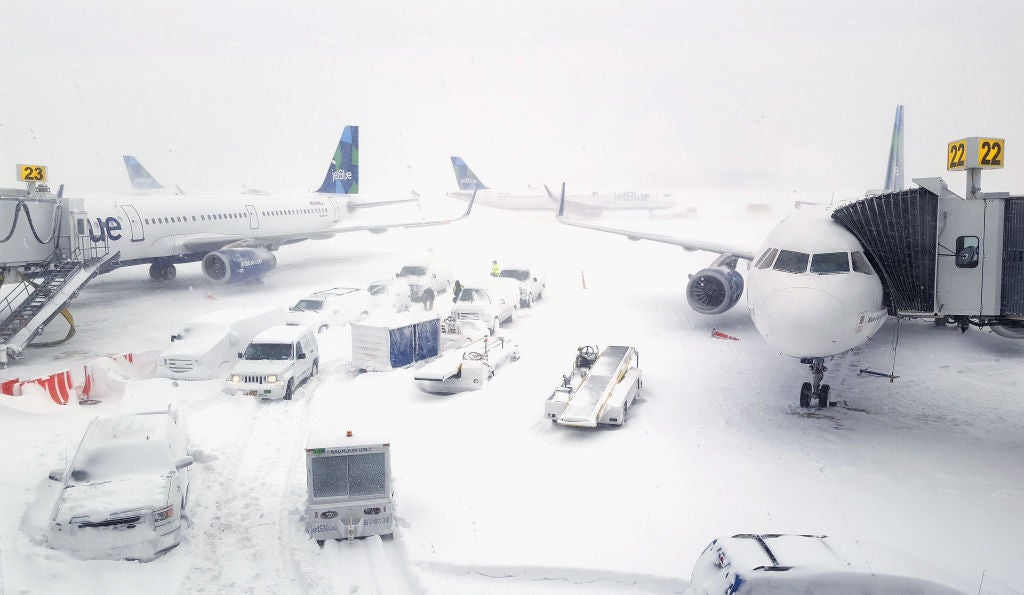 The Bomb Cyclone, Commercial Aviation's Safest Year Ever, Norwegian's Premium Expansion and More
This post contains references to products from one or more of our advertisers. We may receive compensation when you click on links to those products. Terms apply to the offers listed on this page. For an explanation of our Advertising Policy, visit this page.

The Bomb Cyclone Is Still Snarling Travel Into the Weekend

While center of the bomb cyclone has passed north of the US, effects are lingering across the east coast with continuing flight cancellations, an airport still closed and plenty of out-of-place aircraft due to diverted flights.

2017 Was the Safest Year on Record For Commercial Air Travel

A Dutch aviation consultant group released a report saying that 2017 was the safest year ever for commercial air travel. It found that the chance of a commercial airliner being involved in a fatal accident in 2017 was 1 in approximately 17 million.

This week, Norwegian announced that it's going to increase the number of premium seats in its new Boeing 787-9 Dreamliners that it will be taking delivery of soon. The premium cabin will be 60% larger than what's found on its current fleet of 787s, which means that each seat will have 3" less pitch.

Some Delta Elites Can Avoid Being 'Upgraded' Into a Middle Seat

Delta is testing new functionality that allows some elites to avoid being "upgraded" into a middle seat in the Comfort+ cabin. The airline has been struggling to address this issue for a while now, with many elites dissatisfied with an "upgrade" to a less-comfortable seat.

Emirates is one of the world's most-loved airlines, thanks to comfortable hard products and top-notch service in all classes — though its first class is in a league of its own. However, the airline has recently been adding sky-high surcharges on award tickets for the first class product. Here are some of the best alternatives to consider if you want to fly in style without paying through the nose.

Delta Operated Not One, But Two 'Flights to Nowhere' Tuesday Night

Remember a couple of weeks ago when ANA flew an 8-hour “flight to nowhere” from LAX to LAX? Well, not to be outdone, Delta operated two back-to-back flights from ATL to ATL earlier this week.

Read a first-hand report of how United Airlines handled a situation that arose after a couple decided to give themselves an upgrade to business class on the airline's new 77W.

Sun Country's new seasonal service between Los Angeles (LAX) and Honolulu (HNL) will begin on May 19, 2018 and run through August 19, 2018. Flights will be operated four times weekly.

Our points-obsessed staff uses a plethora of credit cards on a daily basis. If anyone on our team wouldn’t recommend it to a friend or a family member, we wouldn’t recommend it on The Points Guy either. Our opinions are our own, and have not been reviewed, approved, or endorsed by our advertising partners.
See all best card offers
Related stories
News
Lower fuel surcharges: Reward Flight Saver rolled out on all British Airways flights
Guide
6 credit card perks you can gift for the holidays
News
Flying Blue introduces an interactive map with entry award rates, officially adds stopovers: What you need to know
Guide
Man overboard: Cruise ship overboards and how they happen