What would the world be like without LeBron James? We may never know, but it was once possible, according to the man himself.

On December 11, the NBA superstar appeared on UNINTERRUPTED’s Road Trippin’ podcast with teammate Dwayne Wade and recounted a terrifying time on a team trip. LeBron had complained to the team’s management about how old the team’s aircraft was when he joined the Cleveland Cavaliers in 2003.

A few years into his career, LeBron brought up the subject again with the Cav’s new owner, Dan Gilbert, who again brushed off his comments. But after a harrowing experience that included broken ankles and lots of puke, the team’s leadership decided to invest in a new airplane.

Hear about the near-death experience from LeBron himself:

“Our team plane at the time, I had always complained about our team plane. It was old. It was run down — and I’m not even a guy who is afraid of flights. I had one scare — the first time I had ever flew — and then after that, I was good.

But I always felt something could happen to this plane. It was painted the old Cavs colors, Carolina blue and orange. It was the old plane, and they owned it. The team owned that plane. But it was over. I noticed it, and this was the first year our new regime took over the team. I was like, ‘Listen, if you want to start with helping us become a better franchise, we need a new fucking plane.’

Our owner’s wife was pregnant at the time — she threw up multiple times. A couple of my family members — DJ Montage — threw up. Our stewardess broke her ankle. We looked into the kitchen at one point during the flight and there was smoke coming out of the kitchen. The lights were flickering on and off. I was like, ‘Oh my God, no one wants to listen to me. I believe this is it.‘ Obviously, I’m still here to talk about it. Nothing happened — but the following year, we had a new plane.”

It appears that the team operated an old Boeing 737-200 around the time of the incident. According to Airfleets.net, the aircraft was delivered in 1975 to Frontier Airlines and was also operated by Southwest and Continental Airlines. The Cavaliers stored the 737 in November of 2006 and now usually charter aircraft from Delta. 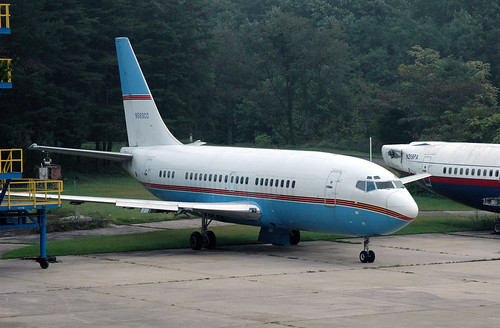 Possibly referring to the same incident, LeBron’s old Cavaliers teammate Drew Gooden said that LeBron told him that he would be able to survive a plane crash by strapping pillows to himself and jumping out of the airplane right before it crashed into the ground.

You can listen to the podcast here, and LeBron fills in the details about the plane incident about 33 minutes into the program.

“We played 1-on-1, ONE time in our whole life … & it was during The (Eastern Conference) Finals.” – @KingJames & @DwyaneWade

Brendan Dorsey is an Associate News Editor at TPG who covers nearly everything for TPG including aviation, credit cards, points, miles, ride-hailing services and more. He previously worked for TIME.
You might like
Canadian government promises solutions to long airport wait times
News
1h ago
Babymoon boom! These are the top 10 spots for a US getaway before the baby comes
News
2h ago
8 tips I wish I knew before traveling solo to Egypt
News
7h ago
Chase Sapphire Preferred® Card