We spent a long weekend in October at the newly opened Grand Hyatt Baha Mar and had an absolutely fantastic time. The hotel and larger Baha Mar complex had many delays on its path to opening, and it may still have a couple kinks as it rolls towards a full opening, but there should be nothing holding you back at this point from enjoying everything it has to offer.

You can read more about our Bahamas miles and points fueled trip planning process, or to get a good feel for the property, check out our “Inside the Grand Hyatt Baha Mar” video linked below.

While that video should give you a good look at the pools, beach, Grand Club, and more, it doesn’t take you inside the actual rooms. In this post, we will look at two Grand Hyatt Baha Mar Ocean View Balcony rooms featuring a king bed as well as the same room type with two queen beds. 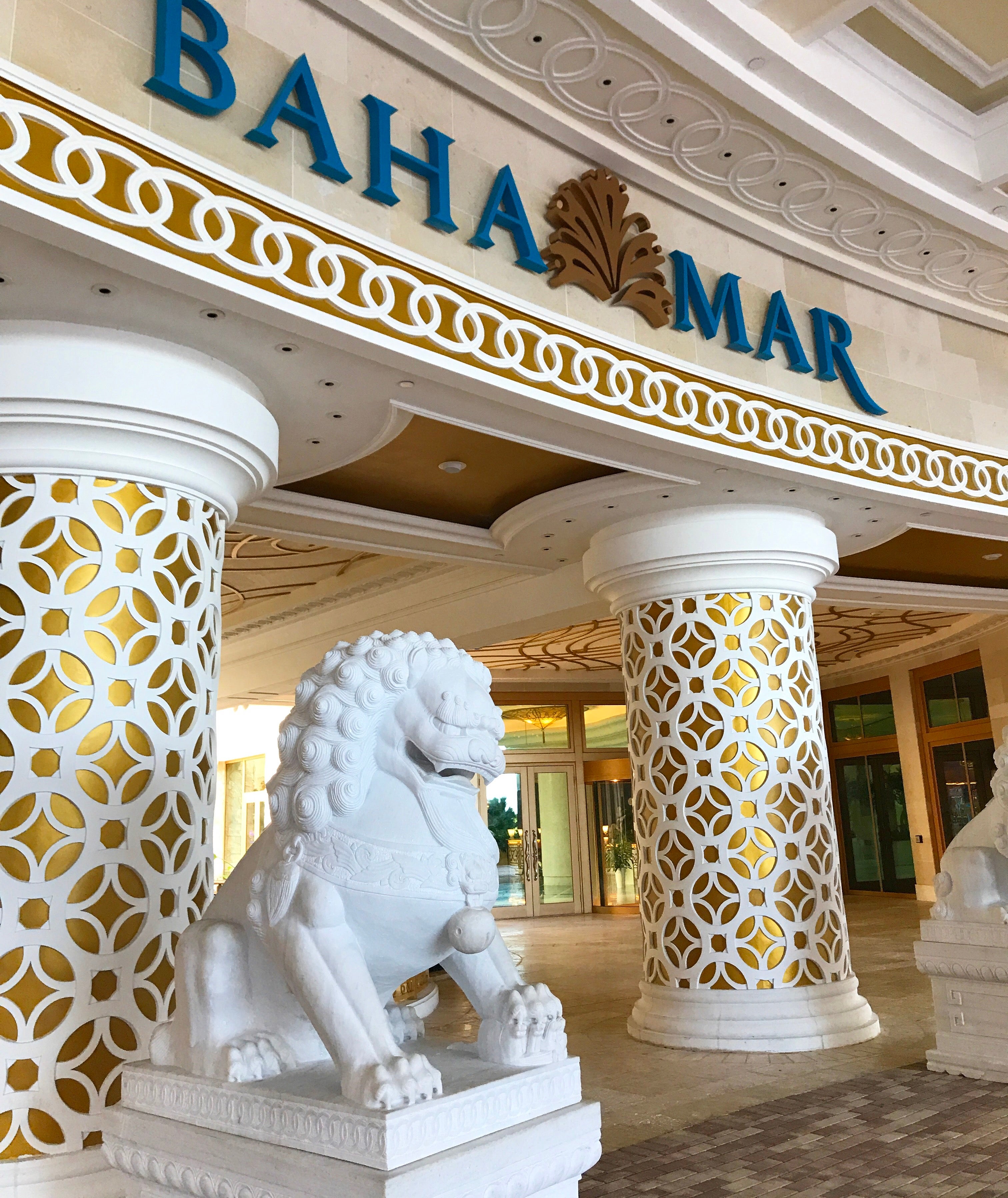 I’d like to pretend that I arranged to view two rooms for your benefit, but this time around that isn’t the truth. In fact, I have had zero interaction with staff at this hotel outside of the normal booking channels, so no special blogger access or perks in the slightest which has its advantages and disadvantages. I booked a room with two queens using 15,000 Hyatt points during a brief “glitch” as the price is now 20,000 Hyatt points per night, which of course you can also transfer from eligible Chase Ultimate Rewards cards.

We arrived at the lobby to check-in around lunchtime after a quick 15-minute ride from the Nassau airport in a van with a carseat booked through Sandra’s Transportation.

At check-in, I was asked if a queen room was okay, and as there were four of us standing there checking-in, I assumed they meant a room with two queen beds as I had booked. I said sure that is totally fine as long as no suites just happened to be available. I have Hyatt Globalist status and thus should be able to get a free space-available suite upgrade at check-in, but such was not to be on this day. I was also unable to use a confirmed suite upgrade in advance, presumably because the base level suites are not yet open and available. 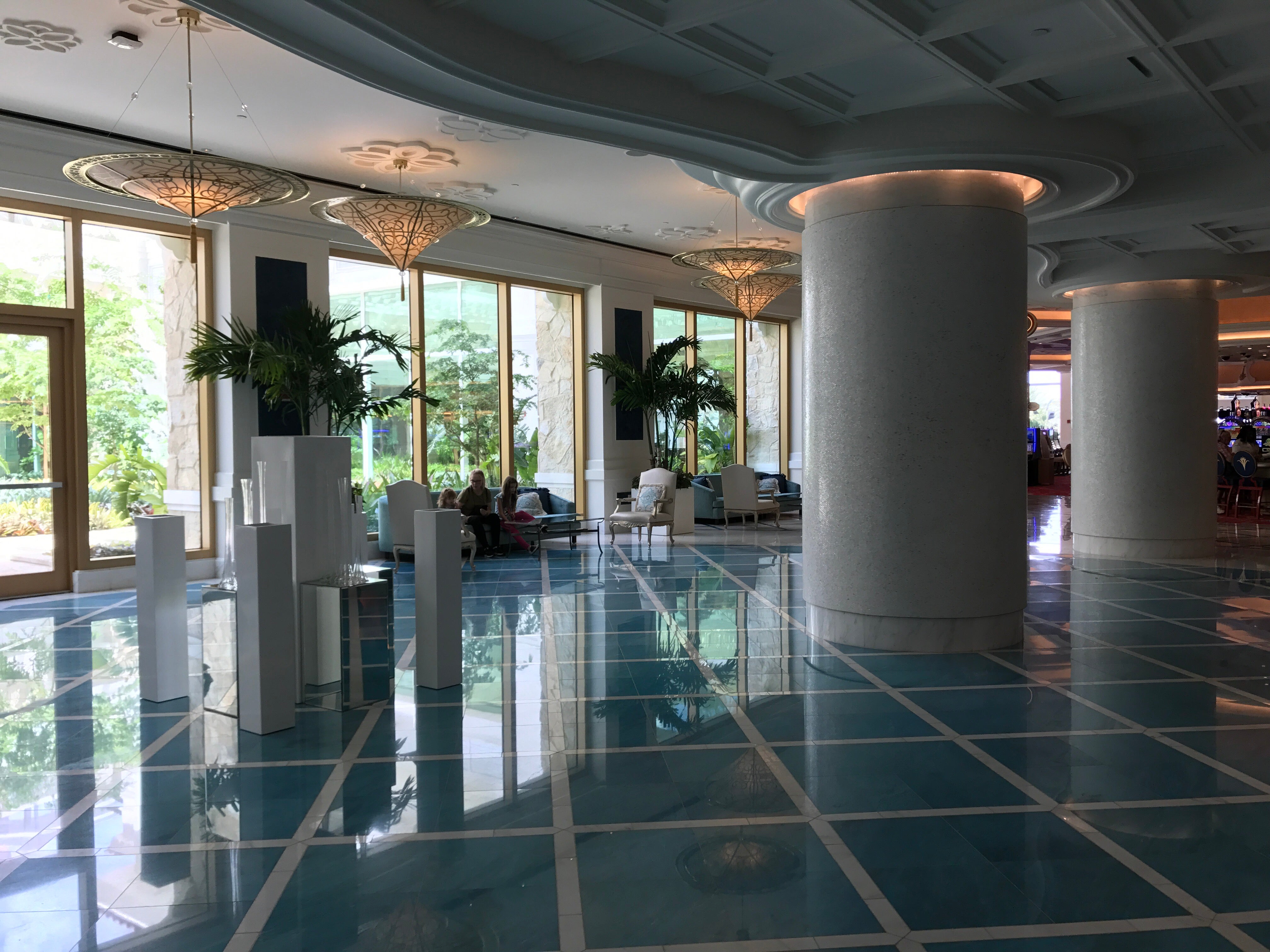 After a few minutes checking in and squaring away that Hyatt Globalist status also got us into the Grand Club, we headed up to our 470 square foot ocean-view queen room…or so I thought. Once we entered we found it was a room with just one king bed.

While the room was quite nice with a sitting area, tremendous view, and open-concept bathroom, it in no way was going to work for my mom, my daughters, and me. After verifying in my own records that we had indeed booked a room with two queen beds, I called back down to the check-in desk and explained that we have somehow ended up with the wrong room type. In the meantime, I was happy to snap some photos of a King Ocean View Room in case you wanted to compare the two room types. 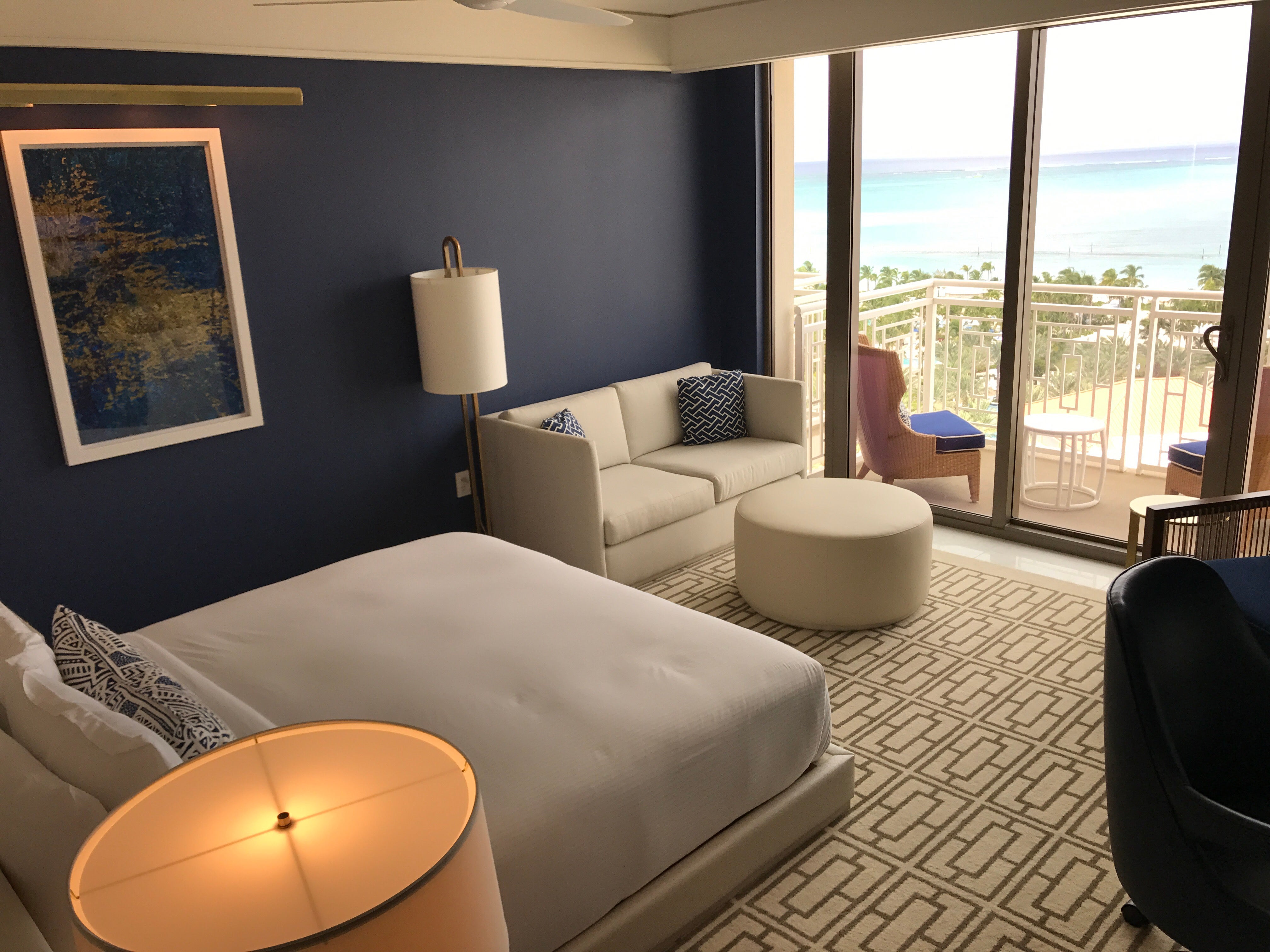 The main difference is that the king room has the extra small couch and circular ottoman that the queen room with the two beds does not. 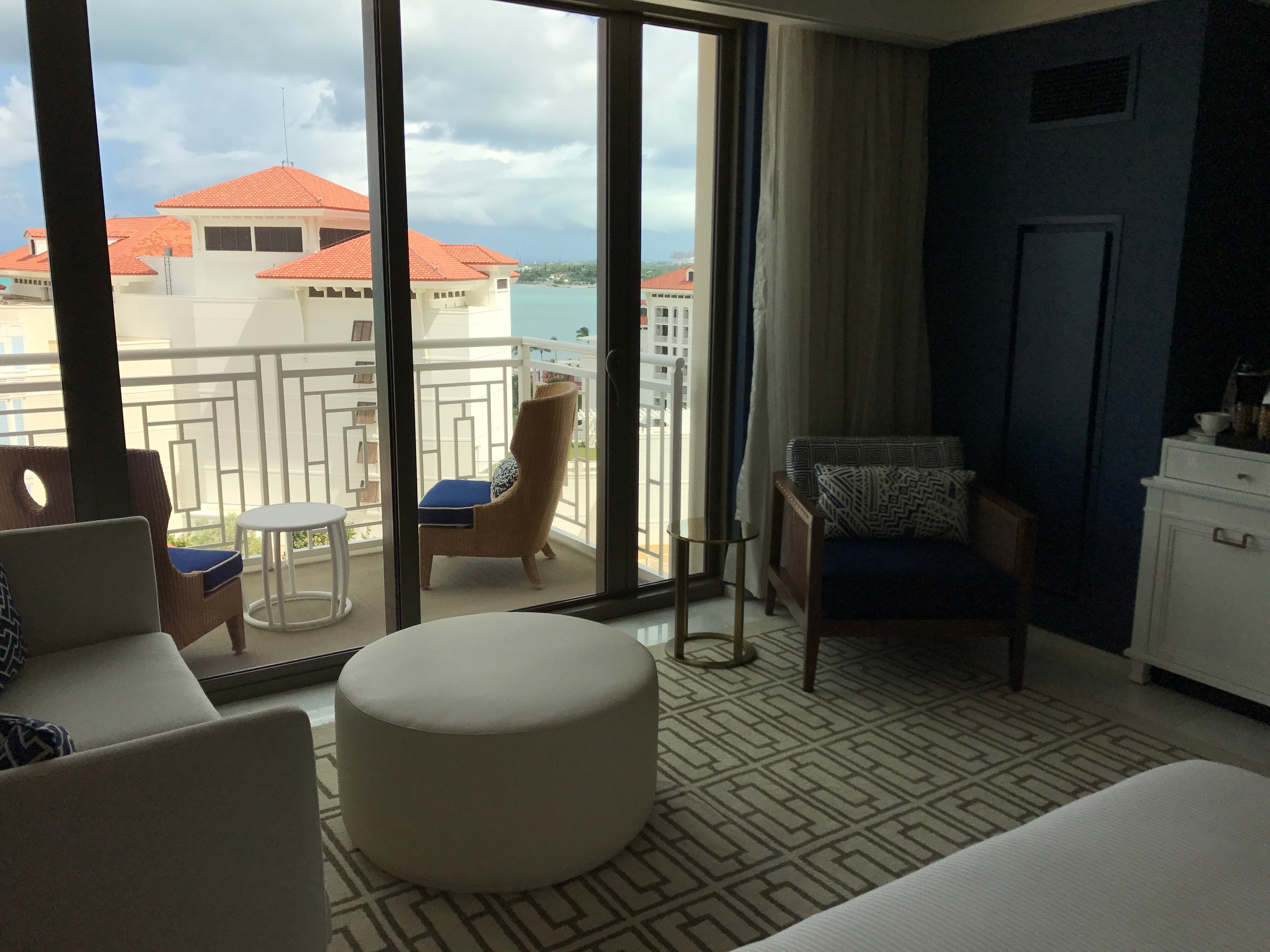 My two year old found the footstool in the king room to be fantastic for spotting the adventures that were awaiting her in the pools and ocean below! 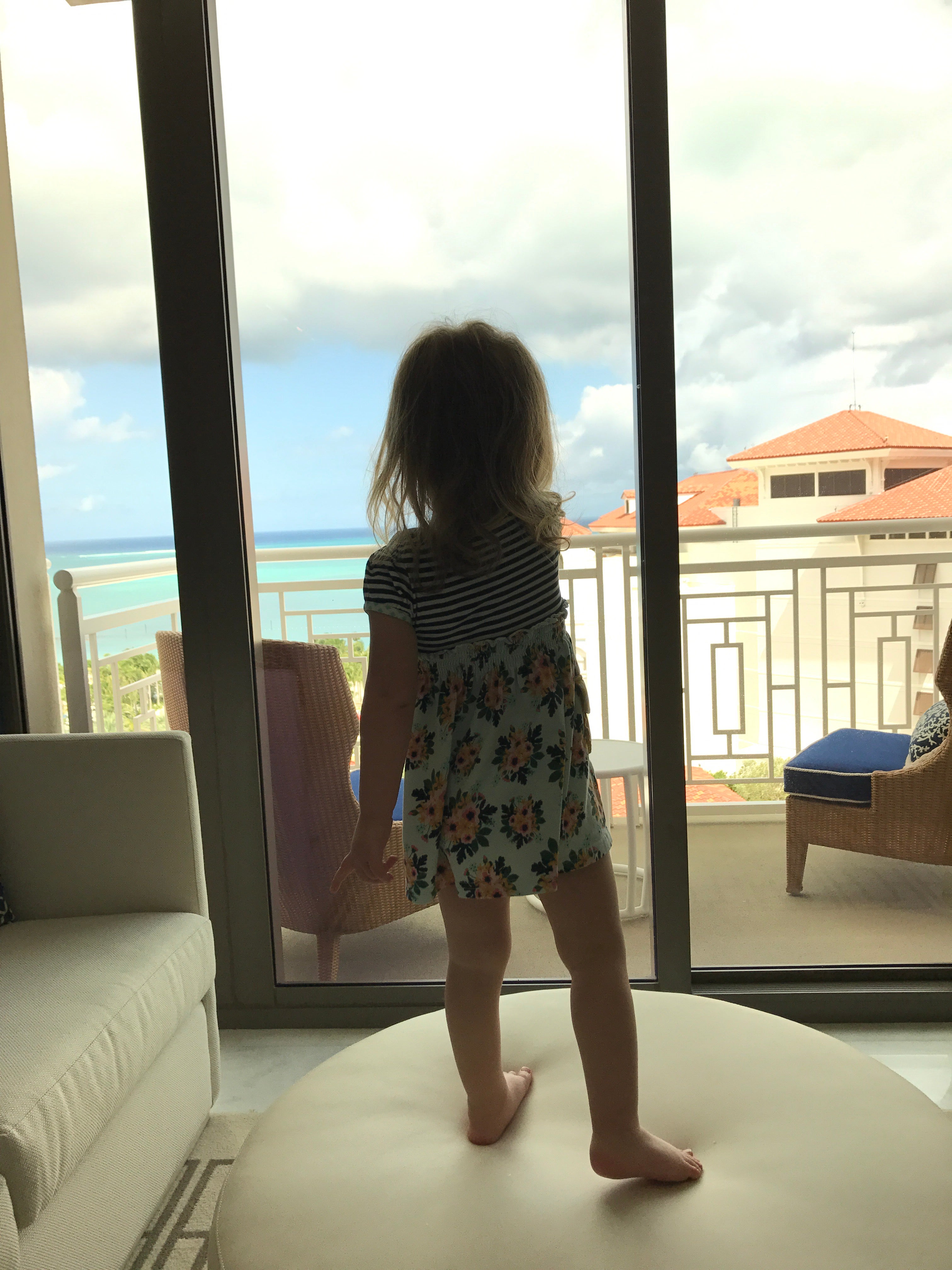 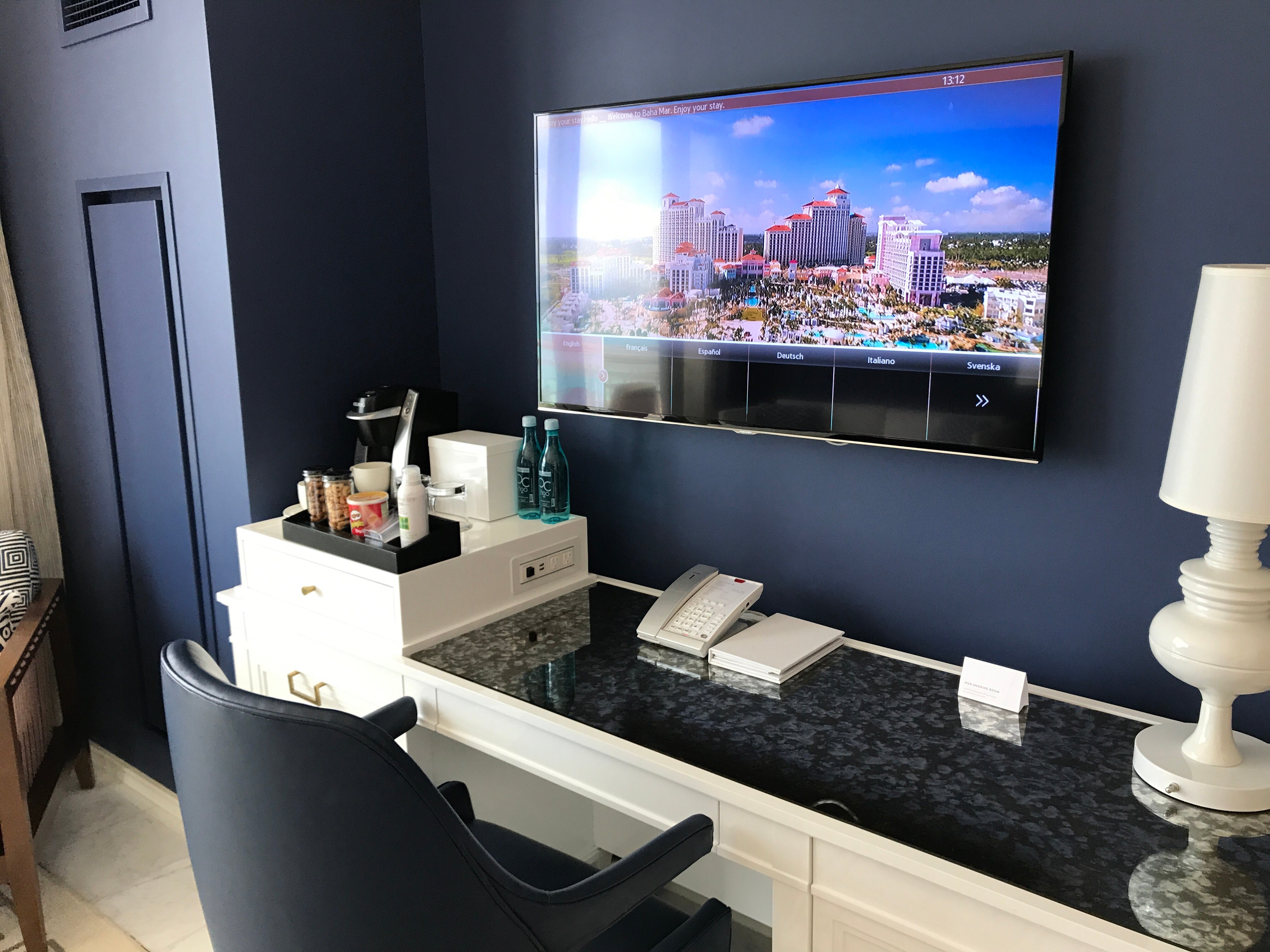 The desk area was approximately the same in both rooms as was the balcony, though we were never successful in getting the balcony door to open in the queen room the way we were in the king room. That pink building you spot in the background is the soon-to-open SLS Hotel, also in the Baha Mar complex. 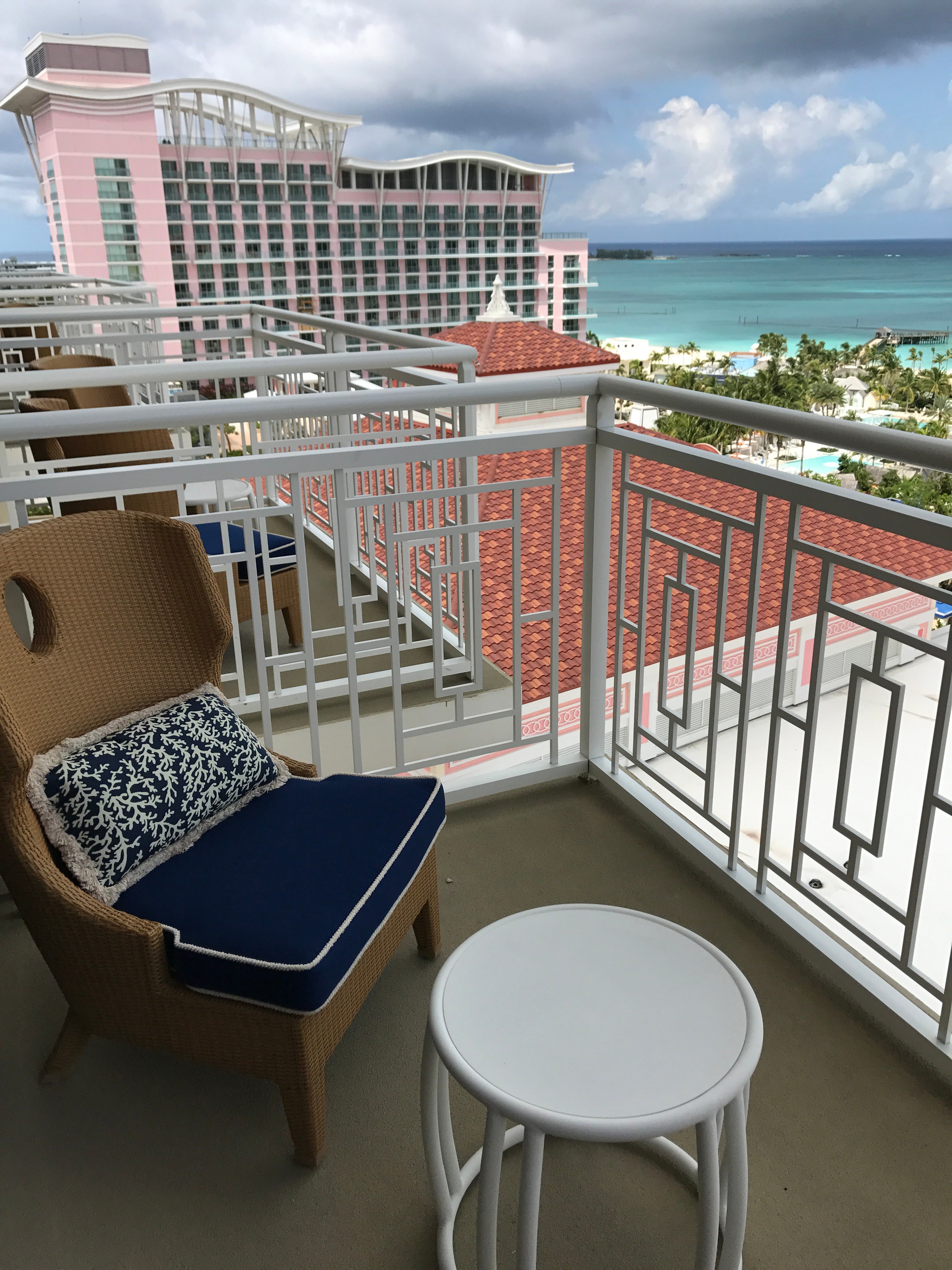 About ten minutes after notifying them of the issue, they sent someone up to move us to the correct room with no real explanation provided as to what happened. That was all well and good except we were taken by an employee to a second wrong room that would not open with the keycard as it was the wrong room on the wrong floor. Thankfully, the third try was the charm, the keycard worked, the room number was correct, and there were indeed two queen beds. 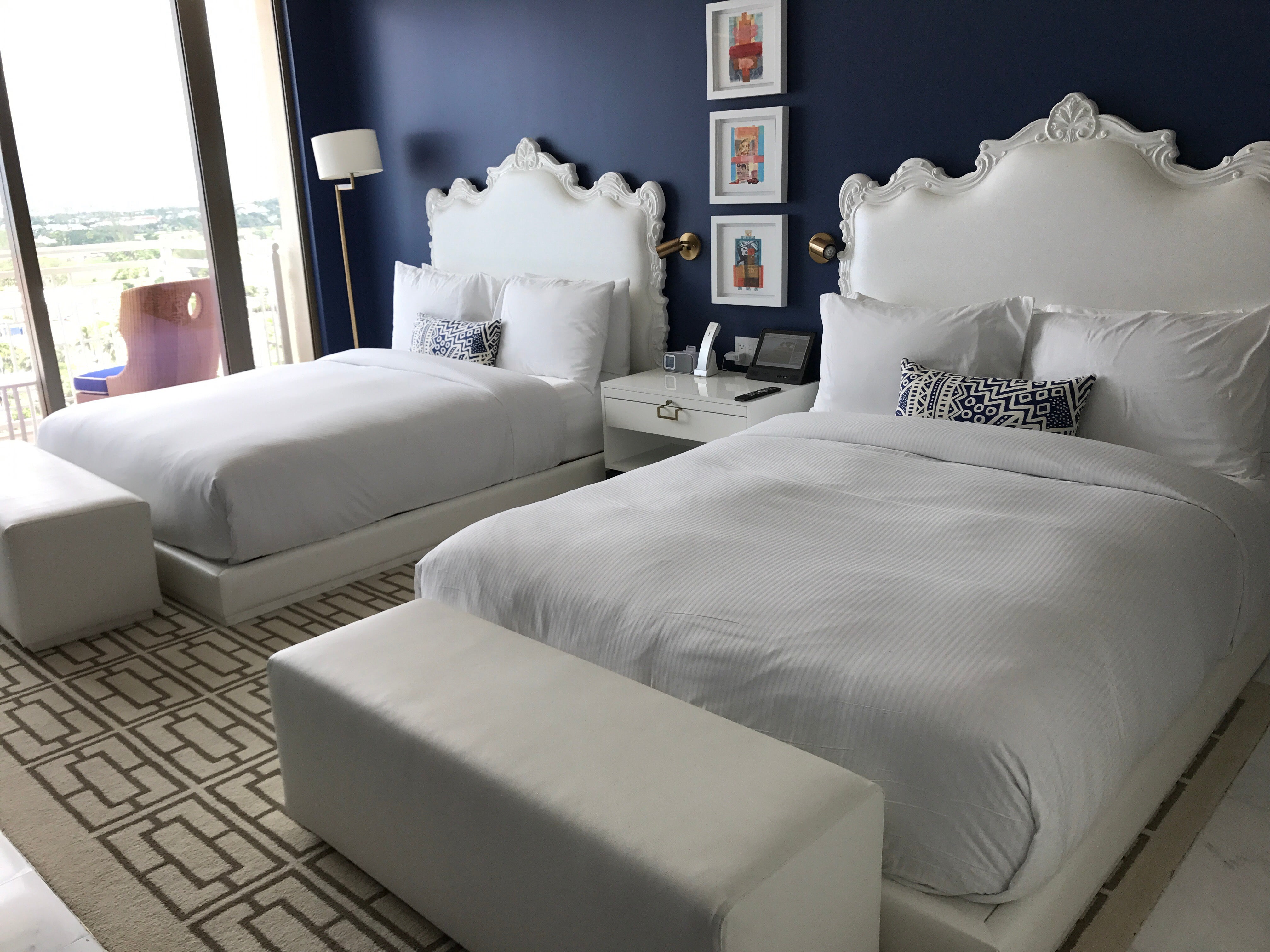 Some of these bathroom photos are actually from the room with one king bed as my two tired girls had been up since before 4AM, and by the time we made it to the third and final room, they had about had it with waiting in the corner while mom took pictures. The bathrooms in the two rooms were virtually identical with a separate shower, toilet, and free-standing bathtub with a wall that thankfully can be closed, though don’t expect a sound-proof bathroom experience. The room’s lighting system was very challenging if you wanted to have light in the bathroom in the middle of the night without impacting those still snoozing. We never figured out a way to make that possible, though perhaps we were missing a switch somewhere. 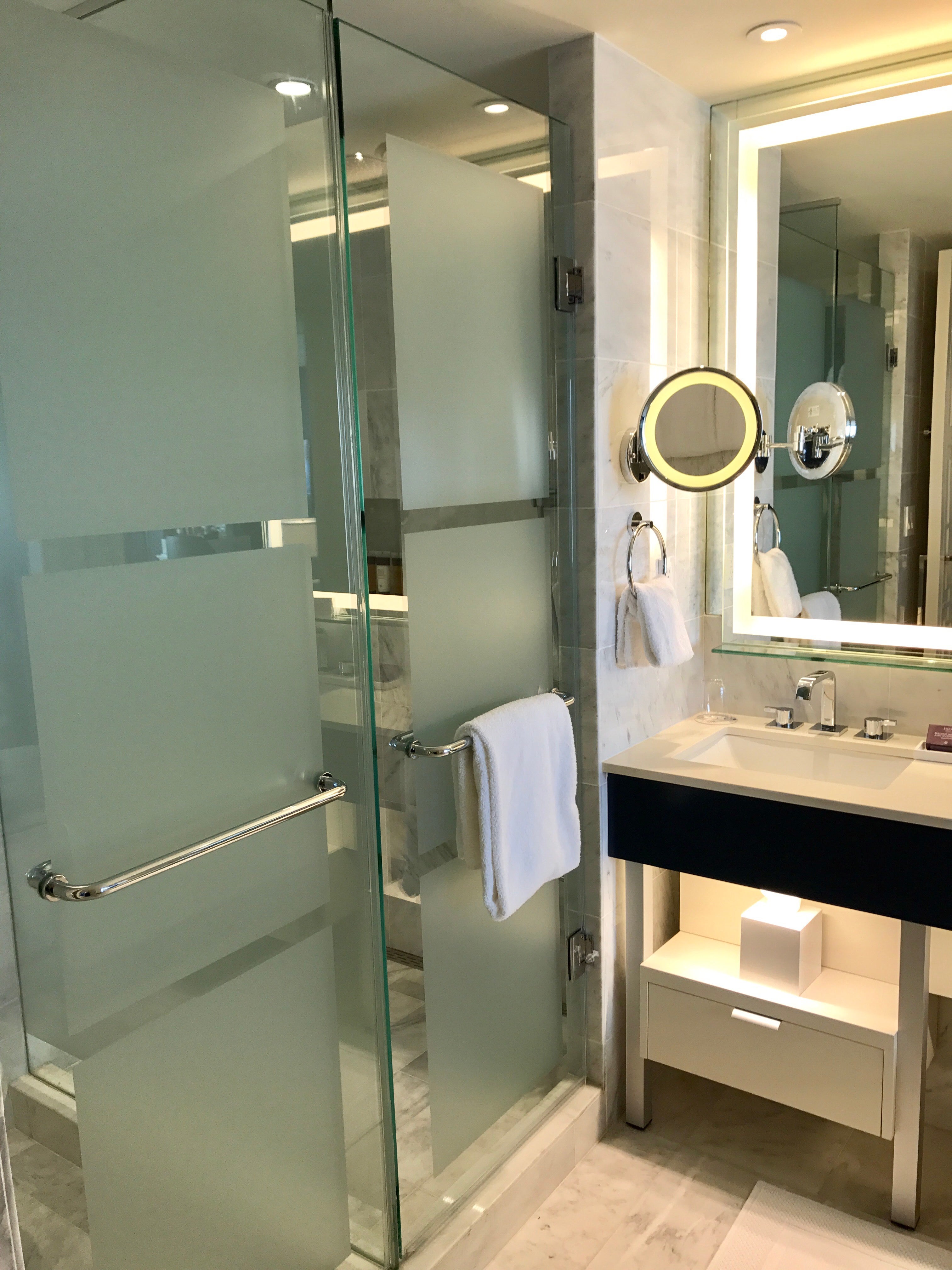 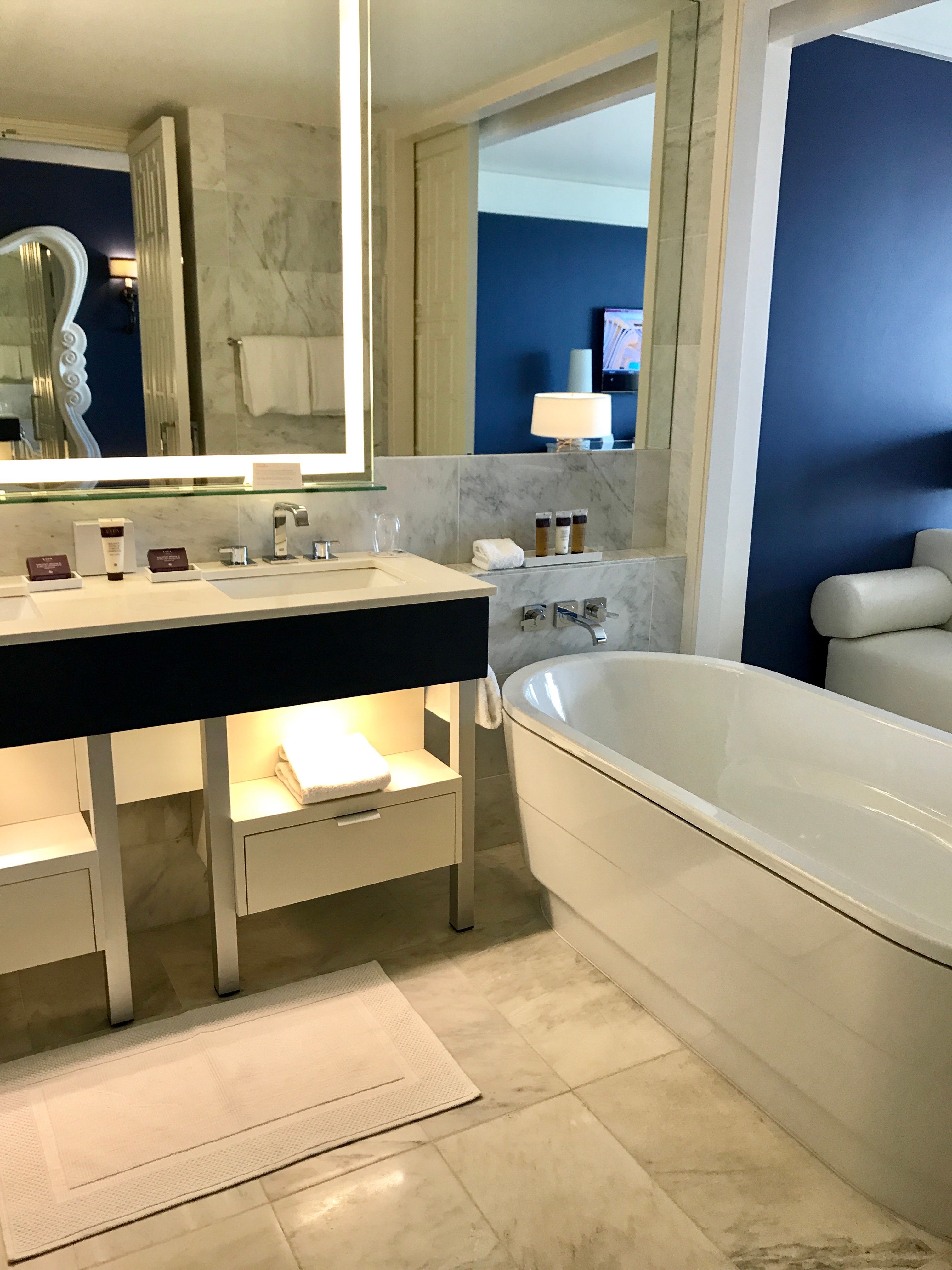 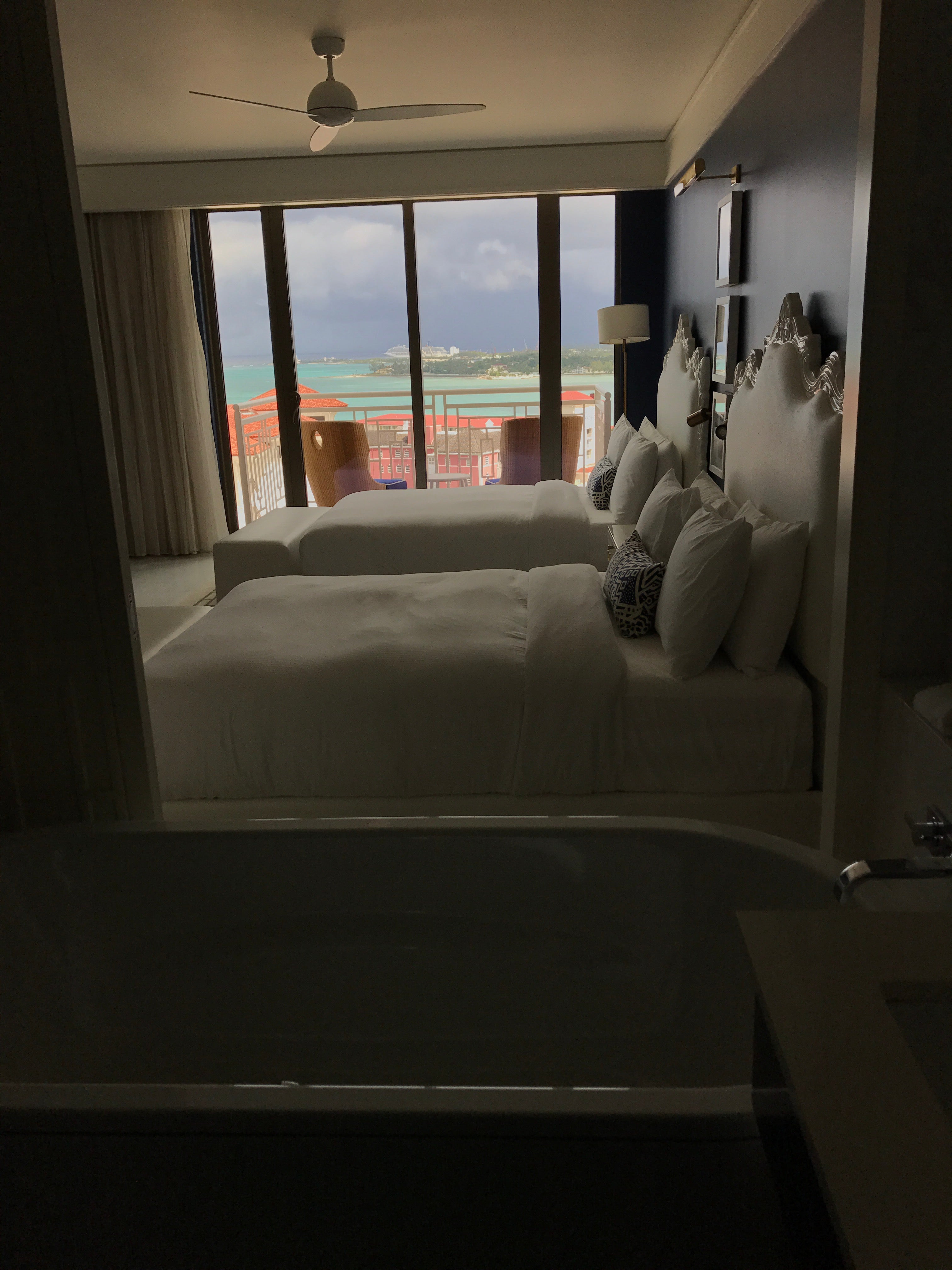 Once the littles were turned loose to explore the room and relax in bed while we plotted the quickest pathway to lunch, the smiles quickly returned and the hassle of getting into the correct room wained. That said, I do think that the three room hop was a good excuse for the front desk to send up a bottle of wine or treats for the girls, as it is not the ideal way to start an island hotel stay with tired kids, luggage, and more. However, they did not, and we didn’t let it dampen our mood. 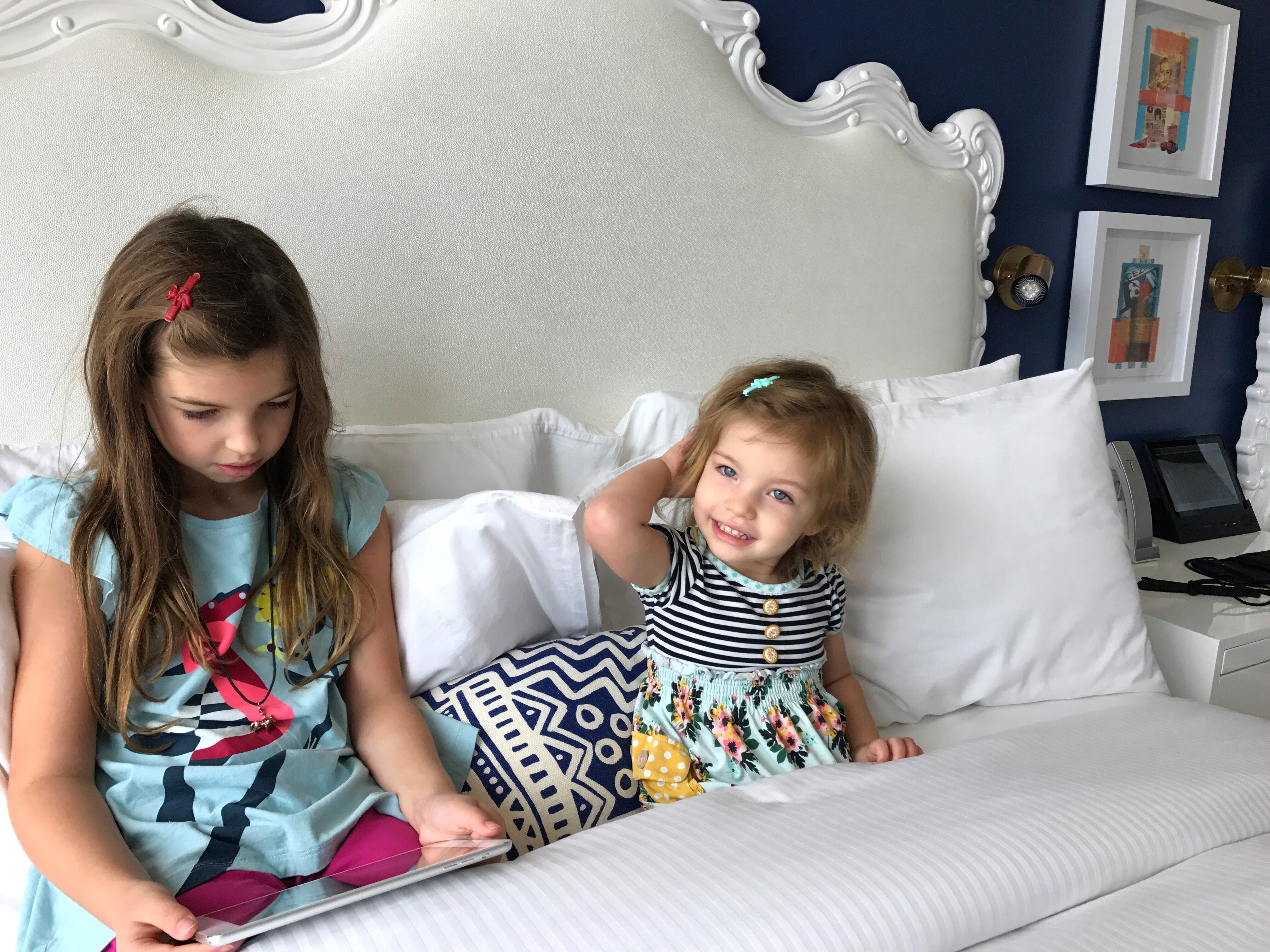 The beds were comfortable and there was an abundance of pillows, though I personally did not love the pillows as it required way too many of them for my personal tastes since they all went flat very quickly. I actually requested different pillows via the handy tablet they have in the room, but they were virtually the same firmness. The tablet itself was actually really handy as you could request items, arrange your housekeeping time, order room service, and much more. It was by far my most successful hotel in-room tablet use to date.

Be aware that this is a large complex with about 1,800 rooms when all is said and done, though I think only a fraction of that number are being used at the moment. There are two wings and our room was not in one with the Grand Club. To get from wing to the other you will have to go down the elevator, through the casino, past two check-in areas, then past another elevator bank, and finally you will arrive at the Grand Club. 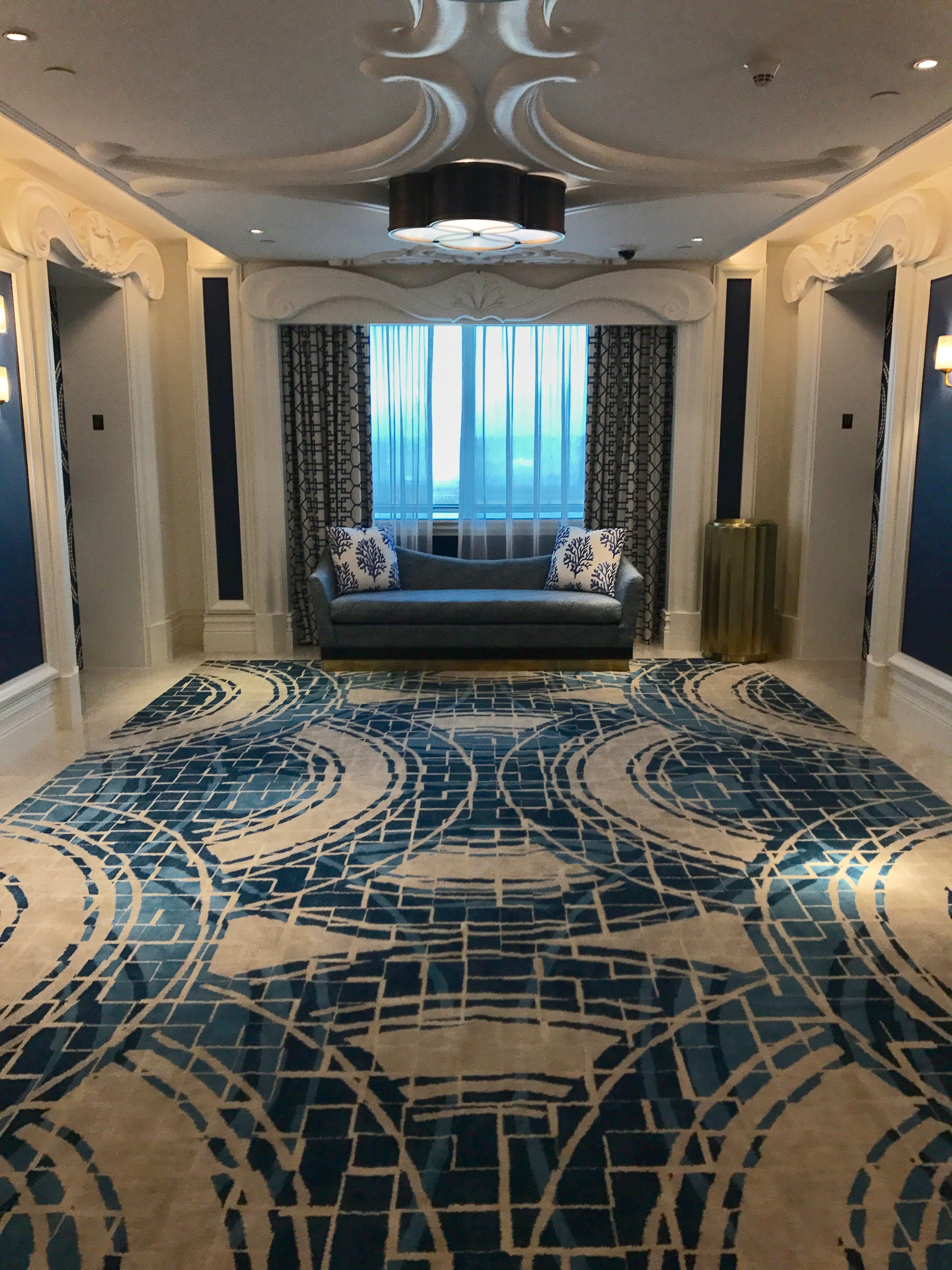 This was probably good for our daily step count but it would have been a nightmare if we hadn’t brought the stroller for the toddler, or if any of us had mobility issues. As it was, all the walking was enough for us to develop some mild flip-flop blisters, so think about your footwear choices carefully as this is a large property. If you are on the fence about a stroller, I 100% recommend bringing it for your toddlers or young preschoolers. 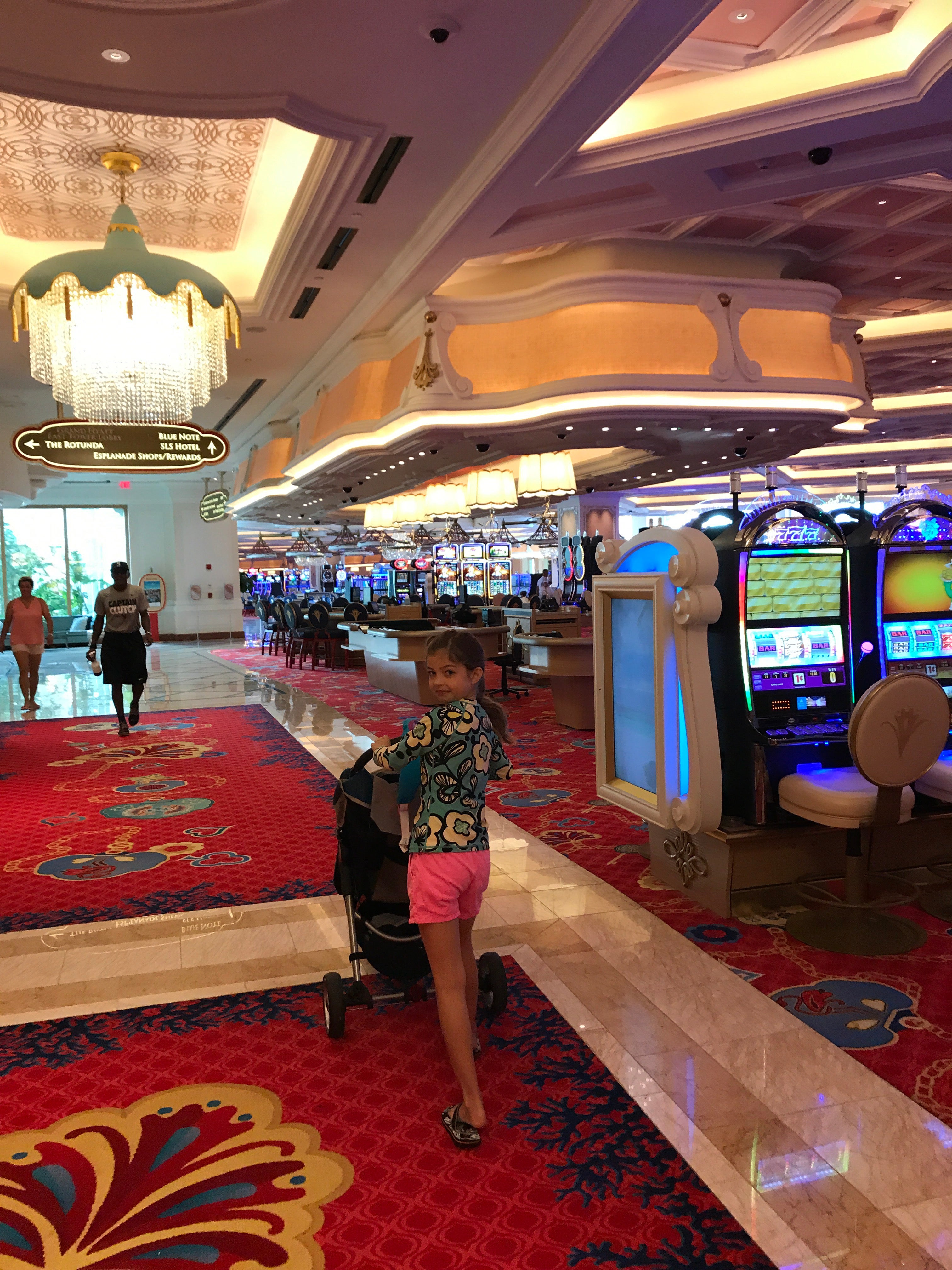 Like many other similar resorts in the Bahamas, there is a nightly daily resort fee, VAT, taxes, and a service charge. To give a feel for these fees, a $200 base rate room will cost you about $300 all-in. The good news is that there were no extra fees on our award reservation, though I have heard mixed reports on the $20 per night service charge being waived on award stays.

While a suite would have been great, the standard room size was totally adequate for our family of four and I’m so happy that rooms are available with two queen beds as opposed to two double beds. The ocean-view upgrade was obviously an enjoyable extra, and while the sliding bathroom door concept isn’t my favorite for families, I loved that there was both a separate shower and tub. We thoroughly enjoyed our stay at the Grand Hyatt Baha Mar so much that after the two award nights we initially had booked, I added a third with cash so we wouldn’t have to leave.

We heard talk of them adding a water park and kid’s arcade in the future, and while that would be extra enticing, I fully plan to go back within a couple of years even if they don’t change a thing.

Stay tuned for most posts about the on-site restaurants, pools, beach, Grand Club details, and more.

Summer Hull aka Mommy Points, ran the Mommy Points site for families who want to travel more for less using miles and points for seven years and now heads up TPG Family when she isn't exploring the world with her own two girls.
You might like
New this fall at Disney World: Celebrate Halloween at the After Hours Boo Bash
News
21m ago
18 creative ways to use Amex Platinum’s monthly $30 PayPal credit
News
52m ago
Americans’ hopes for visiting UK just hit with a major setback
News
3h ago
Chase Sapphire Preferred® Card