So What Did Southwest Say About Hawaii This Week?

After lots of internet rumors and speculation based on Southwest Airlines having luau themed boarding gates, employees in Hawaiian shirts, being a headlining sponsorship of a Hawaii travel summit, impending introduction of new planes to the fleet, and more, fans of the airline (and its Rapid Reward points) waited yesterday for news of a rumored formal announcement that the airline was starting up service to the Hawaiian Islands in 2018. With Southwest reps in Hawaii for the Hawaii Global Tourism Summit, it seemed to be the right place and the right time for such an announcement. However, as you might have noticed, yesterday came and went and no such public announcement was made.

Was a big announcement originally planned and then scrapped for a timing or technicality related reason, or were all of the pineapple-themed ducks that seemed to be in a row purely coincidental? We probably won’t ever know for sure, but while there wasn’t a formal Southwest announcement yesterday related to official routes to Hawaii, here is some of what their social media team had to say to the many Hawaii related inquiries they received yesterday. 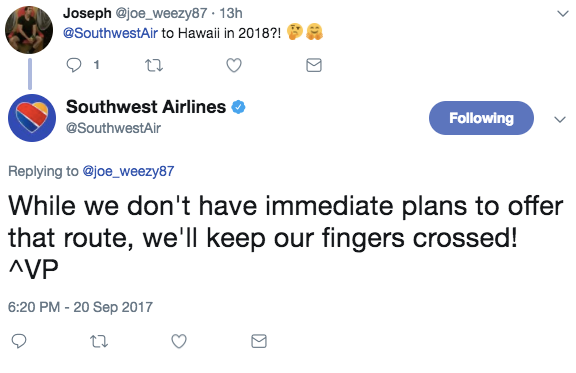 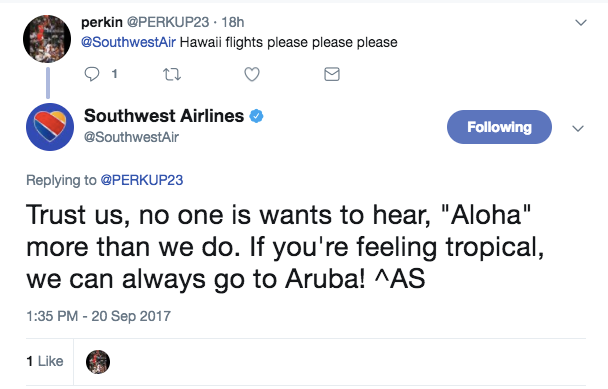 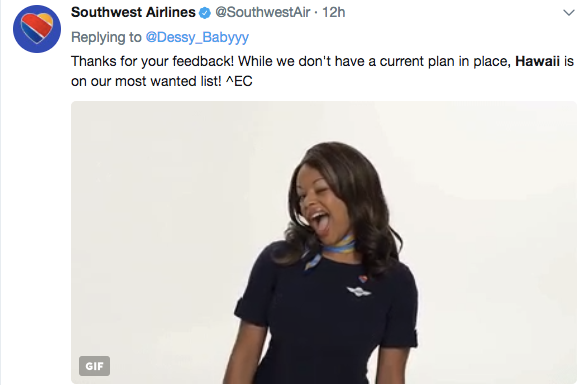 As you can see, there is no confirmation of impending service to Hawaii, but every response is something along the lines of a “most wanted” route, “no one wants it more than them”, “Hawaii is a high priority”, and they are “keeping their fingers crossed”.

In other words, every word, signal, and winky-eyed-gif still points to Southwest making a Hawaii announcement sooner rather than later, but sadly it wasn’t quite as soon as we had hoped yesterday.

Summer Hull , aka Mommy Points, ran the Mommy Points site for families who want to travel more for less using miles and points for seven years. She now heads up a variety of special projects at TPG when she isn't exploring the world with her own two girls.
You might like
Small and satisfying: Flying premium economy on Scandinavian Airlines’ new A321LR from Washington to Copenhagen
Reviews
10m ago
Round-trip fares to Chicago, including summer travel dates, starting at $150
Deals
1h ago
United launches new brand campaign as it seeks to shake final vestiges of troublesome 2010s
News
3h ago
Chase Sapphire Preferred® Card