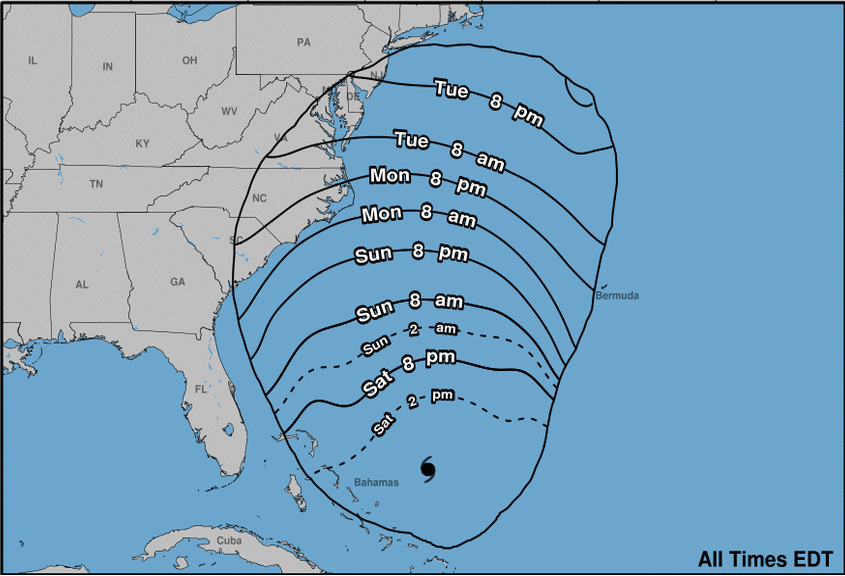 Hurricane Maria's Westward Shift Could Affect East Coast Flights
This post contains references to products from one or more of our advertisers. We may receive compensation when you click on links to those products. Terms apply to the offers listed on this page. For an explanation of our Advertising Policy, visit this page.

After tearing through Puerto Rico and into the eastern Bahamas, Hurricane Maria still isn't done wreaking havoc yet. Currently over open warm water in the Atlantic, the Category 3 hurricane is redeveloping after losing organization over the mountains of Puerto Rico. Forecasts call for further strengthening... and a westward shift.

Originally forecast to stay well off of the US East Coast, this westward shift puts the North Carolina shore in the cone of uncertainty. And, the hurricane packs a tropical storm wind field extending up to 195 miles from the center, meaning the hurricane can still reach far inland even without making landfall.

As of the 11am forecast, the National Hurricane Center calls for the first impacts of Hurricane Maria to reach the Carolina coast this evening. The swells will start causing dangerous surf conditions and rip currents "through much of next week." So, if you're vacationing in the wonderful Carolina coast, take extreme caution when in the ocean.

But it might get more dangerous than that. The NHC notes:

Maria's forecast track has shifted closer to the U.S. east coast, and it is becoming increasingly likely that some direct impacts will occur along portions of the coast next week. Interests along the coast of the Carolinas and the Mid-Atlantic should monitor the progress of Maria, as tropical storm or hurricane watches may be needed for part of this area on Sunday.

Even if the storm doesn't make landfall in the Carolinas, it can continue to affect travel. In addition to ruining beach trips, the hurricane could impact air travel up and down the east coast. Still well offshore, flights are having to take a long way around the hurricane — except for a Google Project Loon balloon, which is designed to provide cell service and Wi-Fi to disaster areas or areas without infrastructure.

Now imagine that flight barricade moved next to the coast. American Airlines' Charlotte (CLT) hub will likely see delays and north-south flights along the coast will be forced to take a longer routing. As we saw from American Airlines' scenic route from Colombia to Miami, these longer routes can add significant time.

No airlines have issued travel waivers for the US East Coast yet. However, we will be watching the storm and these waivers closely, and we'll let you know if you might be able to change your flights to avoid the area. Extensive travel waivers remain in place in the Caribbean in the aftermath of both Hurricanes Irma and Maria.