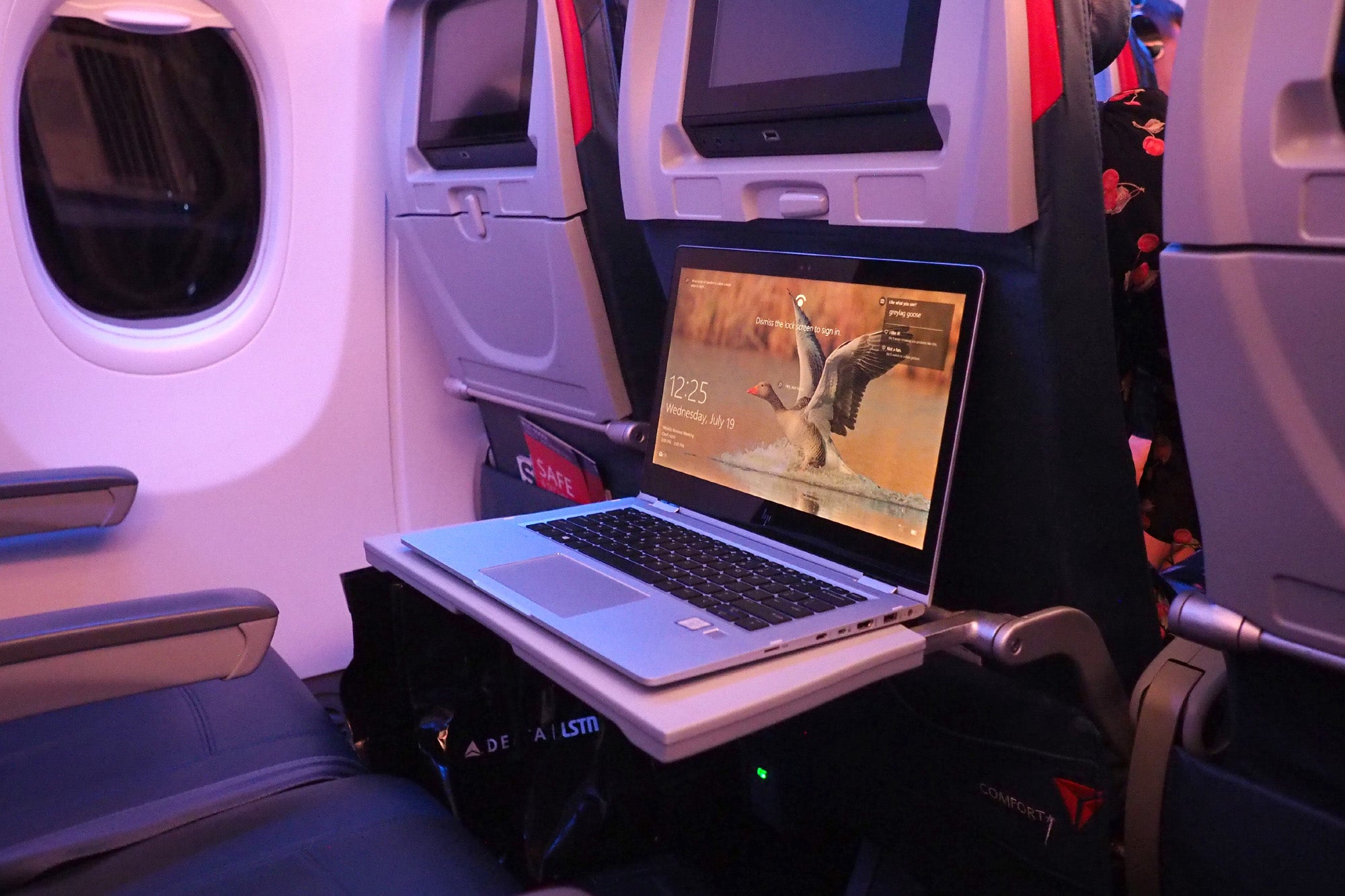 While I've reviewed countless products in my career, for PC Magazine and most recently Engadget, TPG is a travel site with a specific focus — with limited exception, gear reviews haven't been in the cards. We're working to change that.

Luggage is an obvious fit, and even traveler-friendly tech services make sense. Laptops, though? Generally, not so much. Occasionally, certain tech products pique our curiosity, though — most recently, it was Apple's new iPhone X. Before that, something else...

When I first heard about HP's new EliteBook x360, I wasn't especially eager to add it to my gear collection. The device runs Windows 10 Pro, and I've been a "Mac guy" for years — my current workhorse of choice is the 13-inch MacBook Pro. But the x360 has a unique feature that makes it particularly appealing for road warriors, so I decided to take it for a spin.

HP calls this feature "Sure View," and it's intended to prevent "visual hacking." Simply press a button on the keyboard and the display enters a special privacy mode, making it impossible to see any content on the screen from an angle. Given the sensitive documents business travelers tend to work on during flights, and how easy it is for other passengers to even unintentionally view confidential information on a flight, Sure View seemed like a sure thing for TPG readers.

While the 2.82-pound x360 is clearly geared toward business travelers, it has plenty of features that appeal to casual users alike. My favorite, especially for air travel, is the versatile 13.3-inch touchscreen display. You can flip it all the way around so it's flush with the bottom of the laptop, or lock it in any other position in between. My favorite mode for watching movies and TV shows (downloaded via the Netflix app) looked something like this:

I loved having access to so many ports — USB-C is the bane of my existence, and Apple's decision to offer this port exclusively on its latest laptops has infuriated many a consumer.

The EliteBook does offer USB-C, which can even be used for charging, but it also has a dedicated HDMI port, two USB 3.0 ports and a Micro SD card slot, making it possible to easily sync photos if you use the smaller SD card in your camera — which I was able to do with an adapter.

The x360 also offers a standard backlit keyboard, and security features like a fingerprint reader, smart card reader and infrared camera, offering many options for locking down data — beyond simply limiting access to the screen.

You can also add an "HP Active Pen" stylus for $60, which makes it possible to draw on the screen, just as you would an iPad Pro. The x360 includes a battery that's rated for up to 16 hours and 30 minutes, and while I managed to get through about six hours of flying without a recharge, I can't imagine achieving anywhere close that that full rating when watching movies and TV shows.

Hands down, my favorite feature is Sure View. It's super easy to use — a single press of the dedicated keyboard button activates the privacy filter instantly, going from this...

Even a passenger sitting right next to you in economy will have trouble seeing your screen.

Although content looks just fine (albeit a bit washed out) when viewed straight-on.

Unfortunately the display resolution maxes out at 1920 x 1080, which looked especially low-res compared to my Retina MacBook Pro. You can double the resolution for just $3, but that version excludes the privacy filter, which I think is the biggest selling point for corporate road warriors.

The entry-level HP EliteBook x360 1030 G2 (with 8GB of memory and 128 GB of storage) can be purchased for $1,279 (before tax), though the base configurable model starts at $1,599, and you need to select that option just to add on the Sure View screen, which adds $111 to the price. So for a base x360 with the fancy screen, prepare to shell out at least $1,710. I also requested a built-in LTE modem, which adds $109 to the price. I was able to use it overseas when paired with my Google Project Fi SIM card — which worked seamlessly even though only AT&T and Verizon are supported officially.

Adding all of the configurable options, including a 2.8GHz Core i7 process, 16GB of RAM, a 1TB solid-state drive, a pricier power adapter and more can bring the pre-tax price all the way up to $2,955.

I love the x360 in concept, but I struggled to match my usual productivity when using a Windows machine — if you work with images and video frequently, as I do, I think a Mac is the way to go.

That said, the majority of TPG readers are not journalists or professional content producers, and may have never opened Photoshop or iMovie — tools I use on an almost daily basis. If you're used to Windows 10 and are looking for a convertible laptop with the ultimate in privacy features, and the ability to add a super-handy LTE modem, I think HP's latest EliteBook is definitely worth a look.

Do you use a privacy filter when you fly? Tell us about it, below.