Articles
Emily McNutt is The Points Guy's Global News Editor and is based in London.
Follow
Aug. 04, 2017
•
5 min read 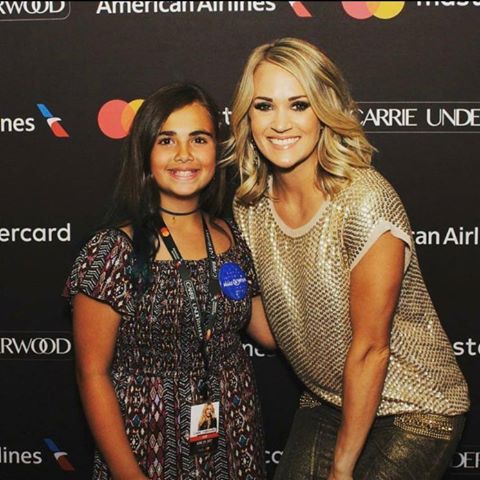 How American Airlines and Make-A-Wish Helped a 10-Year-Old Girl Meet Carrie Underwood
This post contains references to products from one or more of our advertisers. We may receive compensation when you click on links to those products. Terms apply to the offers listed on this page. For an explanation of our Advertising Policy, visit this page.

The Points Guy has teamed up with the Make-A-Wish Foundation to help dreams come true for children who are fighting life-threatening medical conditions. Since more than 2.8 billion airline miles are needed to cover travel for every child's wish this year alone, they need our help to make that happen.

We're sharing the stories of how four carriers — American Airlines, Delta Air Lines, Southwest Airlines and United Airlines — are helping Make-A-Wish to grant travel wishes. We're asking you to donate your miles — as many as you can — to help. Please visit the Make-A-Wish website, where you can donate points and miles from American, United, Delta, Southwest and JetBlue. And for every 5,000 miles you donate, you'll get one entry into our contest, where you can win one of five one-on-one points and miles consultations with TPG himself.

In December 2008, Makayla's eyes began to swell on Christmas Eve and her symptoms got so bad that she eventually had to be transported to the hospital by helicopter during a snowstorm. Makayla was eventually diagnosed with a rare kidney condition, and since then, her health has fluctuated. She's been admitted to the hospital multiple times as her condition can get worse without any indication.

Last year, 10-year-old Makayla saw Carrie Underwood perform in concert for the first time in Reno, Nevada — she had been standing in the front when the Grammy award-winning artist waved to her. After Makayla's grandmother referred her to Make-A-Wish, it didn't take long to determine her wish — none other than to meet Carrie Underwood. Make-A-Wish made it — and some more — happen, thanks to the generosity of their friends at American Airlines. The Northeastern California and Northern Nevada chapters of Make-A-Wish immediately started planning to send Makayla, her mother, grandmother and two brothers from Reno, Nevada, to Los Angeles to see Carrie at a private concert hosted by American Airlines and Mastercard, an exclusive event for American Airlines AAdvantage Mastercard cardholders through its #MilesMakeMemories platform.

Like many other wishes, this one required travel, so Make-A-Wish worked closely with AA to put together the ultimate trip for Makayla and her family. Their three-day adventure started with a trip to a local vet's office, as one of her other wishes was to be a veterinarian. Then, the family took to the skies for Makayla's first-ever flight. Bound for LAX, American Airlines gave Makayla the royal treatment by allowing the family to board early and stop by the cockpit to peek around and learn about what it's like to be a pilot.

The night after the family arrived in LA, Makayla's wish came true — she got to see her idol, Carrie Underwood, perform in concert yet again. And not only that, but before the show even began, Makayla was whisked backstage to meet Carrie, chat for a bit, get some autographs and take a few photos. Topping off an already-perfect evening, Carrie found Makayla in the crowd and waived to her during the show. It was a dreamlike experience, all made possible by AA and its commitment to working with Make-A-Wish to make wishes come true.

“We’re bringing more priceless [experiences] into our cardmembers’ lives through our partnership with Mastercard," said John P. Bowers, vice president of co-brand partnerships at American Airlines. "In this spirit, we were thrilled to help make Makayla’s wish a reality.”

American Airlines has been a partner of Make-A-Wish since 1989 and since the two started working together, AA has donated tens of millions of miles annually to Make-A-Wish through its "Miles for Kids In Need" program to help dreams like Makayla's come true. "American Airlines was the perfect fit for this wish," said Jessica Lehner, the marketing and communications manager for Make-A-Wish's Northeast California and Northern Nevada chapter.

The entire trip, including a day at Universal Studios, was one to remember for Makayla and her entire family. "It was surreal," Makayla's mom said. "We will all remember it forever. What Make-A-Wish does for kids, you can't even put it into words. It's so amazing what they can give."

In order to make more dreams like this come true, Make-A-Wish needs more points and miles. Of the 15,200 wishes the organization granted last year, 77% required some form of air travel, like flying Makayla from Reno to Los Angeles. You can do your part to help grant wishes like this by donating your American AAdvantage miles, DeltaSkyMiles, United MileagePlus miles, Southwest Rapid Rewards points or JetBlue TrueBlue points to the organization.

Once you’ve donated, send an email to donatemiles@thepointsguy.com with a screenshot of how many miles you’ve given to be entered to win one of five special one-on-one consultations with The Points Guy in New York City, where you'll learn how to replenish the points and miles you've just donated. For every 5,000 miles you donate (regardless of from which program) you'll get one entry into the contest, so the more you donate, the more chances you’ll have to win. You can view the official TPG sweepstakes rules here for more details. Donating can also help to keep the miles in your account from expiring, so if you have 50,000 miles that are getting close to the expiration date, donating any amount will keep them all active.

Stay tuned for more inspiring stories of how Make-A-Wish has teamed up to make kids' wishes come true throughout the month of August.