We decided about two months ago to personally witness and experience the American Total Solar Eclipse. We wanted the whole enchilada, the deluxe package of maximum totality. However, to achieve this meant travel, as the view from our front porch in southeast Texas was only going to be about 65% occlusion. We looked at the eclipse maps that highlighted the areas of our country that were in the path of totality. Some of the locations were pretty sexy and exciting and certainly tempted us, but we ended up being pragmatic and choosing proximity, practicality, and points availability over popular and prestigious. Kansas City became our target of choice and would serve as the epicenter for our pursuit of the ultimate shadow. 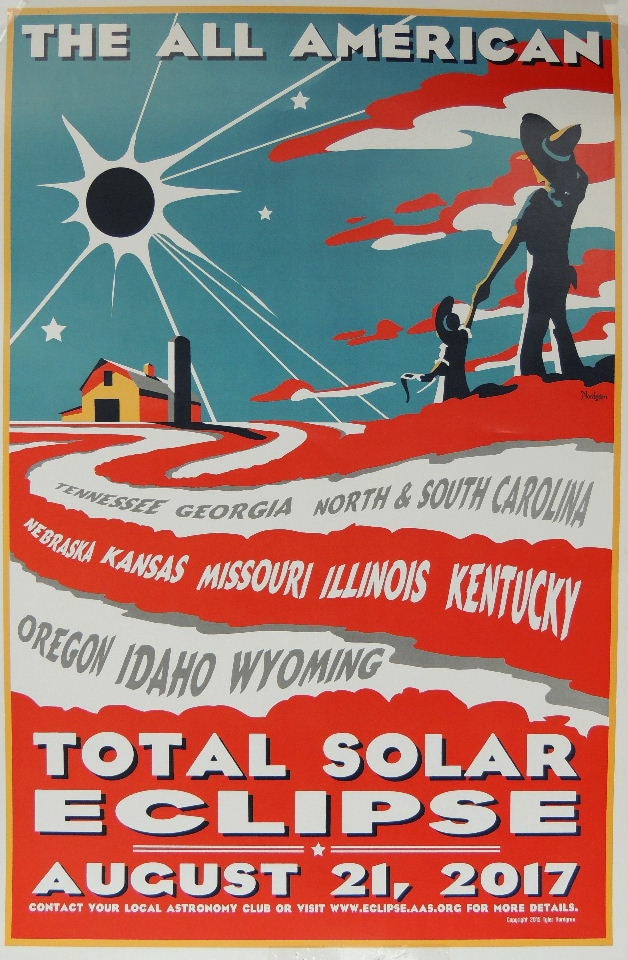 We spent the weeks prior to our journey learning as much as possible about the cities in the path and the events that were planned in connection with the eclipse. Small towns, large towns, farm communities and metropolitan areas all got caught up in the craze. Websites popped up with countdown clocks and pages describing the festivals, campsites, parking, lodging, entertainment, eclipse t-shirt designs, vendors and viewing options that were available. If you were a city along the route, August 19, 20 and 21, were highlighted on your calendar, and you had “plans,” and those plans included maximizing the opportunity to attract visitors to your locale.

We also started frequently checking projected weather forecasts beginning about 10 days out. Initially, sunny skies were anticipated. Then, partly cloudy, then mostly cloudy with a chance of rain entered into the equation. We knew weather could be a fickle friend or foe, and we decided to react to the conditions once they were real and not predictions.

We must admit some of the news reports about roads being backed up for 20 miles in Oregon and the widespread reports of expected heavy congestion and crowds throughout the viewing area were a little disconcerting and worrisome. We had purposely selected a hotel near the Kansas City Airport that was in the southern extreme of total eclipse zone ( about 1 minute 20 seconds of totality). If driving became impossible, we could use the hotel property as our viewing station.

After arriving in K.C. from our dawn’s early flight, we decided to use our early arrival as a chance to go visit two of our potential viewing sites, Lathrop and Plattsburg, Missouri. 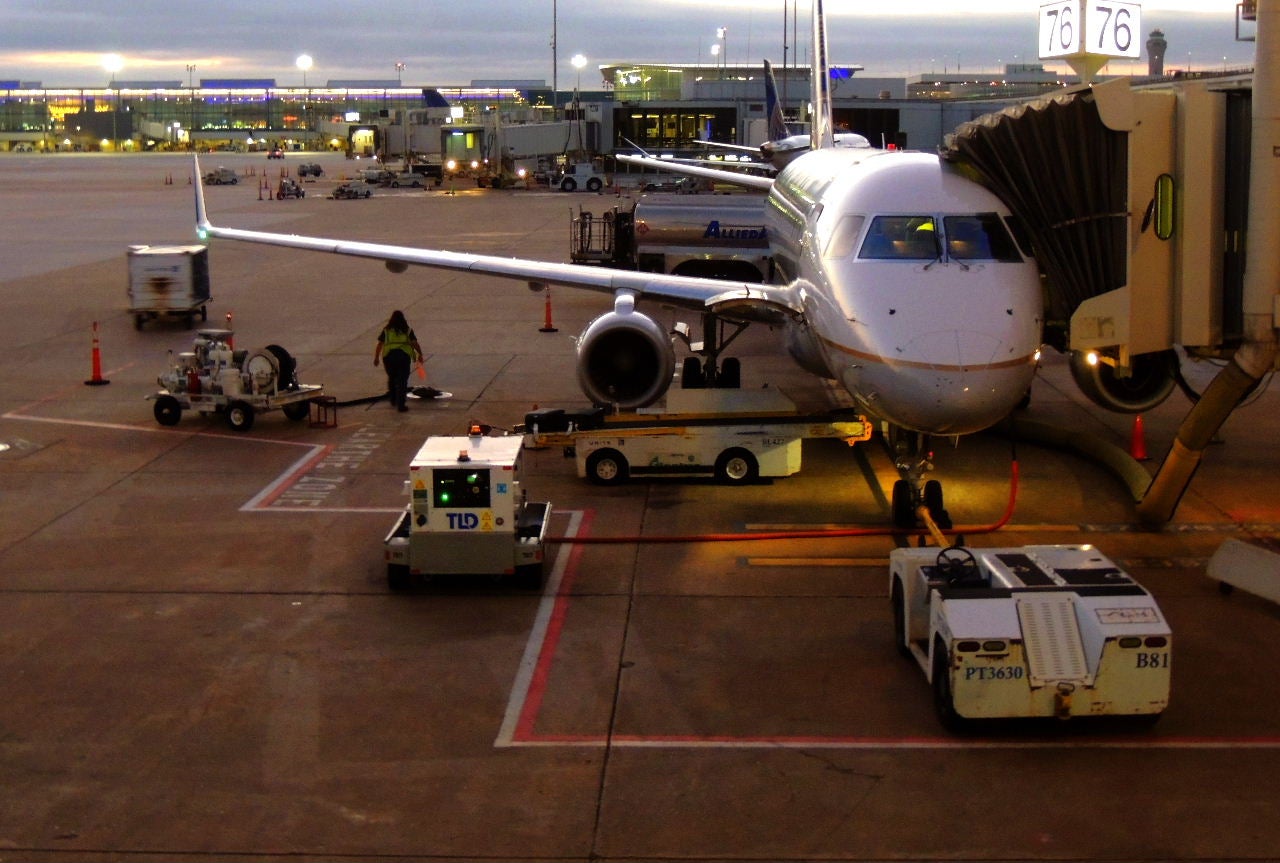 We wanted to check out the traffic, the crowds and get a feel for what we might expect on day zero. It had been projected that Lathrop could have between 60,000 and 100,000 out-of-towners converge for the viewing. 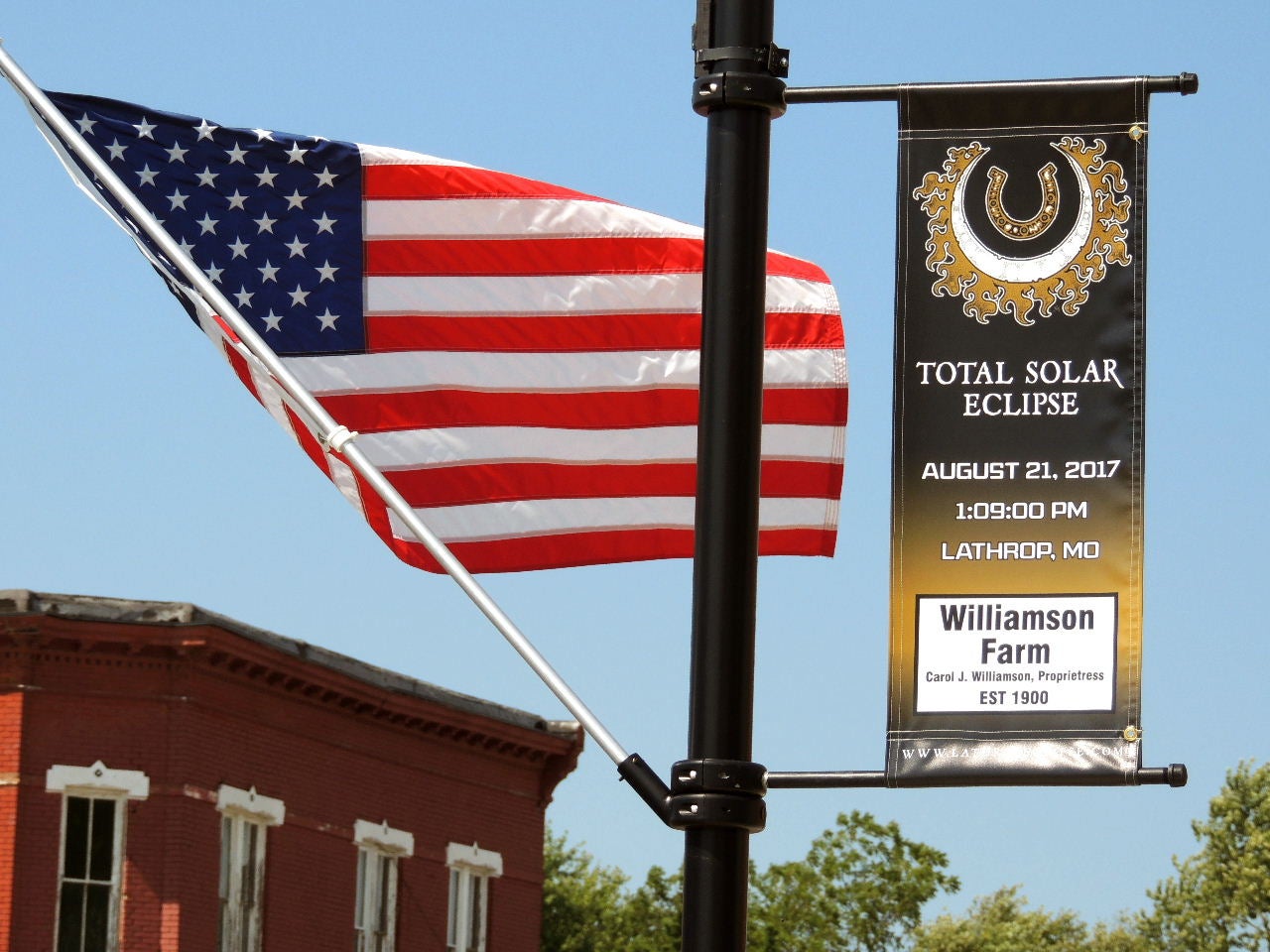 Both of these towns had populations around 2,000 people with small downtown areas, mom and pop businesses that mostly served an agricultural population that was obviously expert in the raising of corn and soybeans. The crops were healthy and full and rolled in rows up and over the hilly and beautiful west/central Missouri landscape. 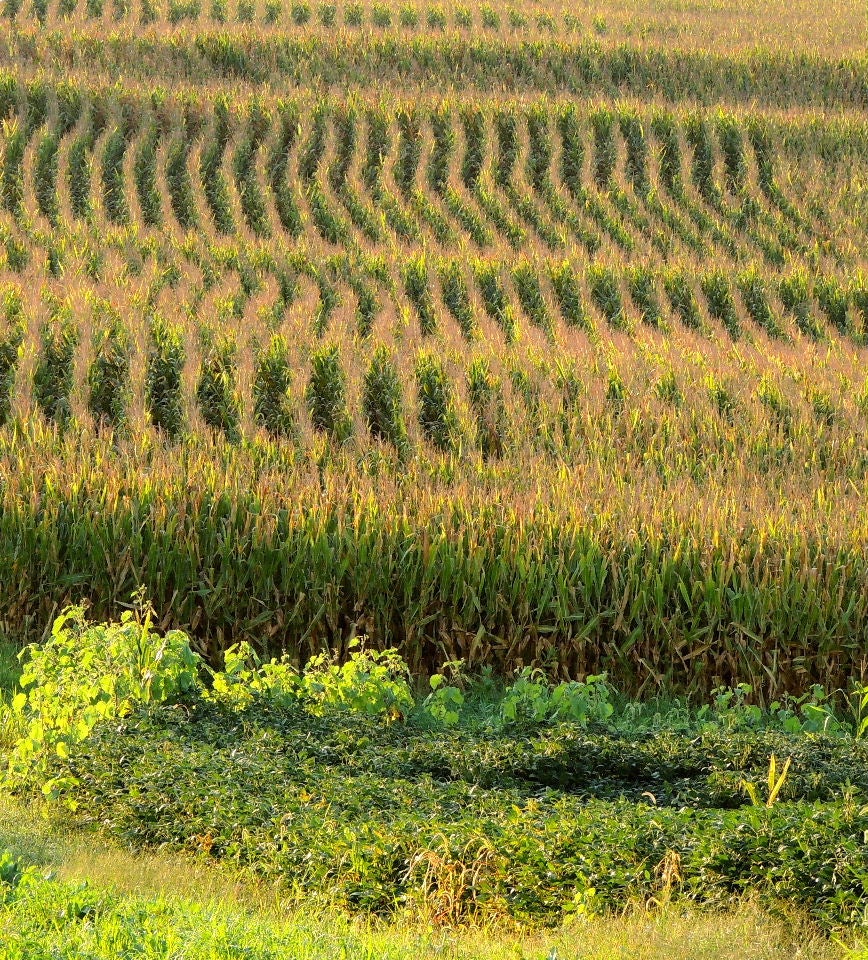 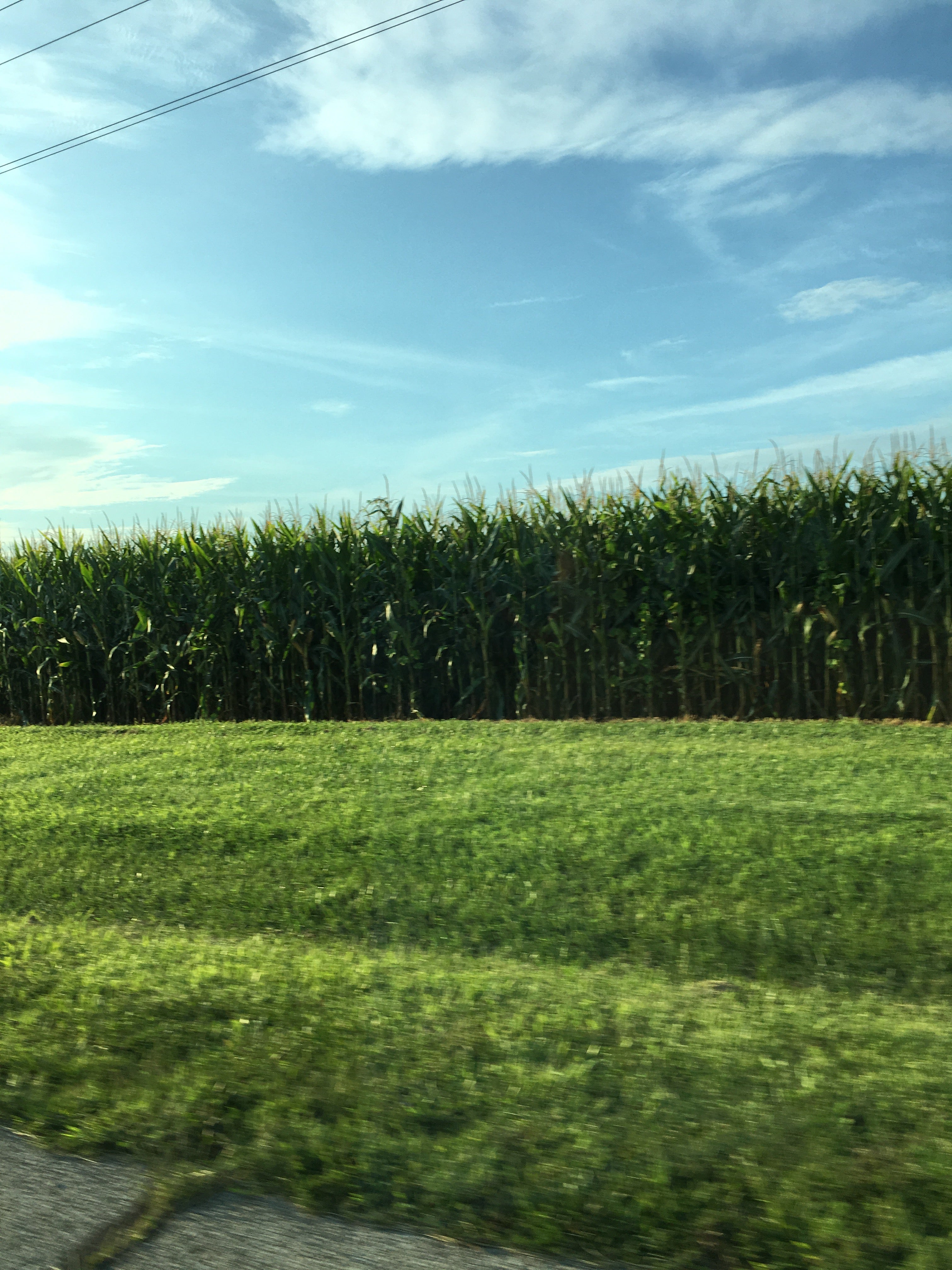 There was very little traffic to contend with as we enjoyed a peaceful Sunday morning drive. We found more calm than chaos in these rural settings despite the eclipse being only 24 hours out. We drove the streets, walked the main business district and spent time at the fairground where booths were selling everything from eclipse glasses and official U.S. postal eclipse stamps to BBQ sandwiches, turkey legs and homemade ice cream. 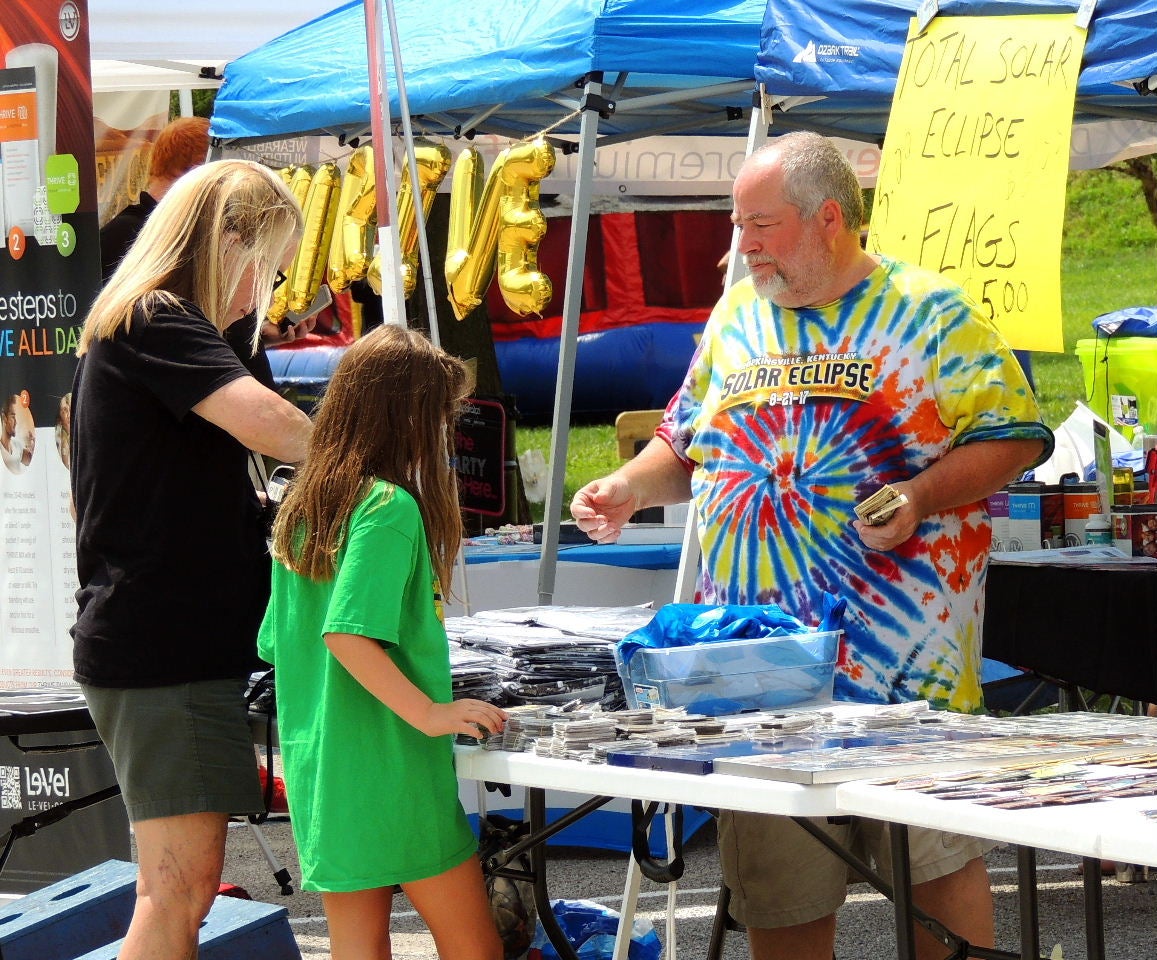 All of this was taking place under the wafting tunes of local talent that were performing under the covered arena. We overheard that all the campsites and prime parking areas had been sold out, but the crowd was only in the hundreds while we were there.

Our take from our recon mission was that it seemed that travel was going to be doable, and that the crowds were going to be manageable. This convinced us that it was going to be safe to leave the confines of our hotel and venture out into the world of eclipse-o-mania come Monday morning. With our 4:00 AM wake-up alarm also came a cloudy weather forecast for Plattsburg and Lathrop that discouraged us from those sites, and we set our sights about 75 miles further east to Marshall, Missouri.

We were out before dawn on E-day just in case cars and people started popping out of the woodwork and cornfields. If they did, they were wearing camo as the roads were again suspiciously vacant.

We were parking on the city square of Marshall by 8:30 AM along with about fifty other cars. The pace was slow and quiet as we milled around the square looking into the windows of the stores and offices that lined the streets of this county seat. I could close my eyes and visualize this downtown square’s vibrancy and activity when it would have been the community’s pulse and heartbeat in the 1950s.

Marshall was pretty much on the center path of the eclipse, and it made a serious and dedicated effort to reward those that chose it as their viewing destination. A giant Moonstruck in Marshall mural was painted on the brick wall of a corner store to serve as a great photo op and centerpiece for this unique event. 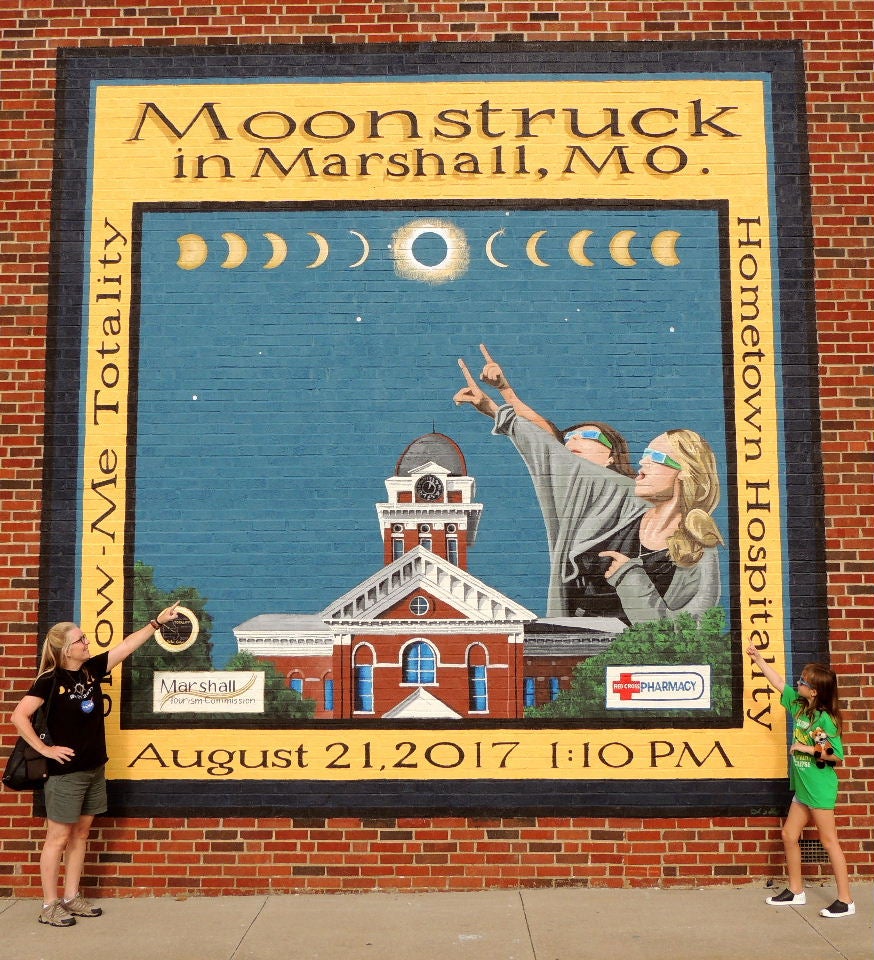 A sporting good store quickly sold out of pre-made special eclipse t-shirts, and a line soon formed through the store and out the door of customers waiting to have the screen printing put on any shirt or clothing item they could find on the store shelves.

The ongoing conversational topics for the day were the t-shirts and the approaching cloud cover. About 10:30AM, or 2 hours and 40 minutes until total eclipse, we weighed our options. Stay in Marshall and hope for a break in the clouds, or head toward the southeast where the skies were still blue. We decided to hit the road.

We shoved our chips to the center of the table, and we were now all-in to win as we pointed our car toward Columbia and Jefferson City, Missouri. We had come this far, and we were on a mission. We were essentially backtracking on the Lewis and Clark trail but more like Curious and Lark than true adventurers and explorers. We drove 30 minutes, 45 minutes, an hour, and we could not completely break past the clouds to clear air.

We passed many groups large and small parked in fields and lots along the way as they gathered to witness the moon as it started upstaging the sun. However, we stayed the course and continued on. Hello Columbus, Goodbye Columbus. Jefferson City was going to be our last stand. 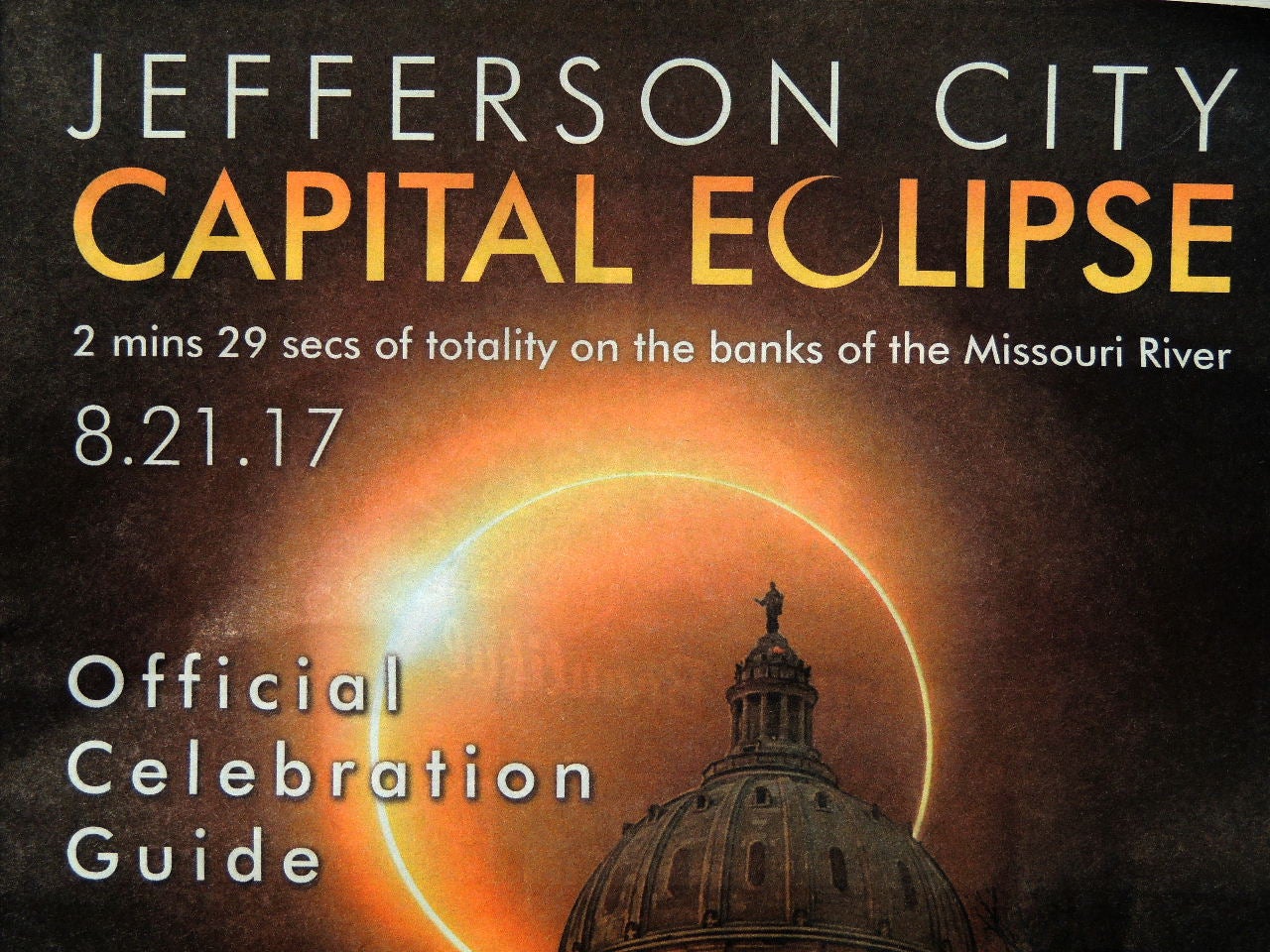 As we entered the city, we came upon a park hosting an event. There were cars, people, a carnival, food trucks, music, vendors, and MOST IMPORTANTLY there were clear skies and a big bright sun. We couldn’t get in there fast enough to donate our $10 admission fee. It was now T-minus 42 minutes and counting. We put on our official eclipse glasses and watched as the moon slowly but steadily dimmed the mighty orb. 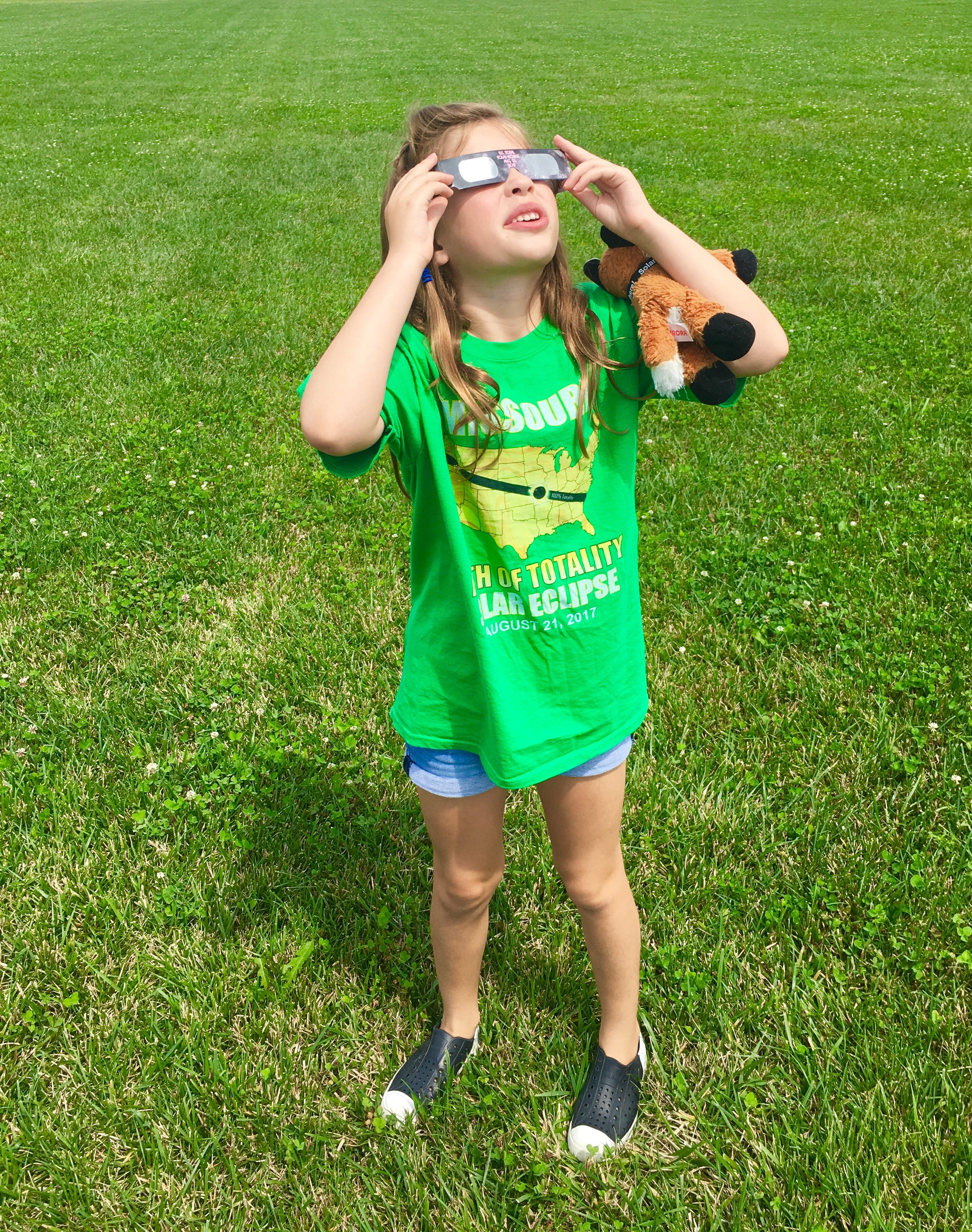 You sensed, you felt, you saw the light changing in intensity and saturation. It became softer and diffused and became slightly more amber. And then, darkness fell and the crowd cheered. 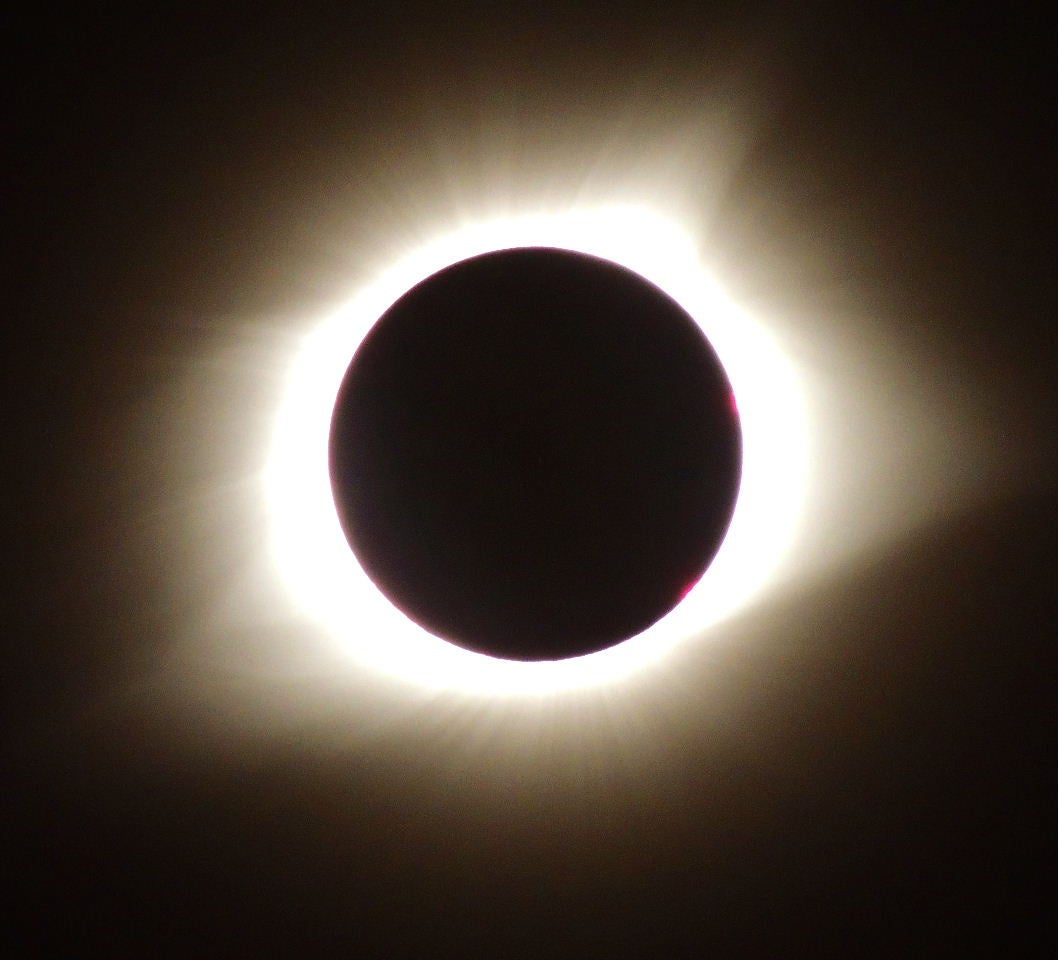 A joyful, but peaceful, glee existed. It was like in a few moments the day had turned to night, and the energy of the sun had been turned into excitement for those lucky enough to be present. Stars and planets appeared, lights came on, glow sticks glowed and the horizon appeared as sunset. 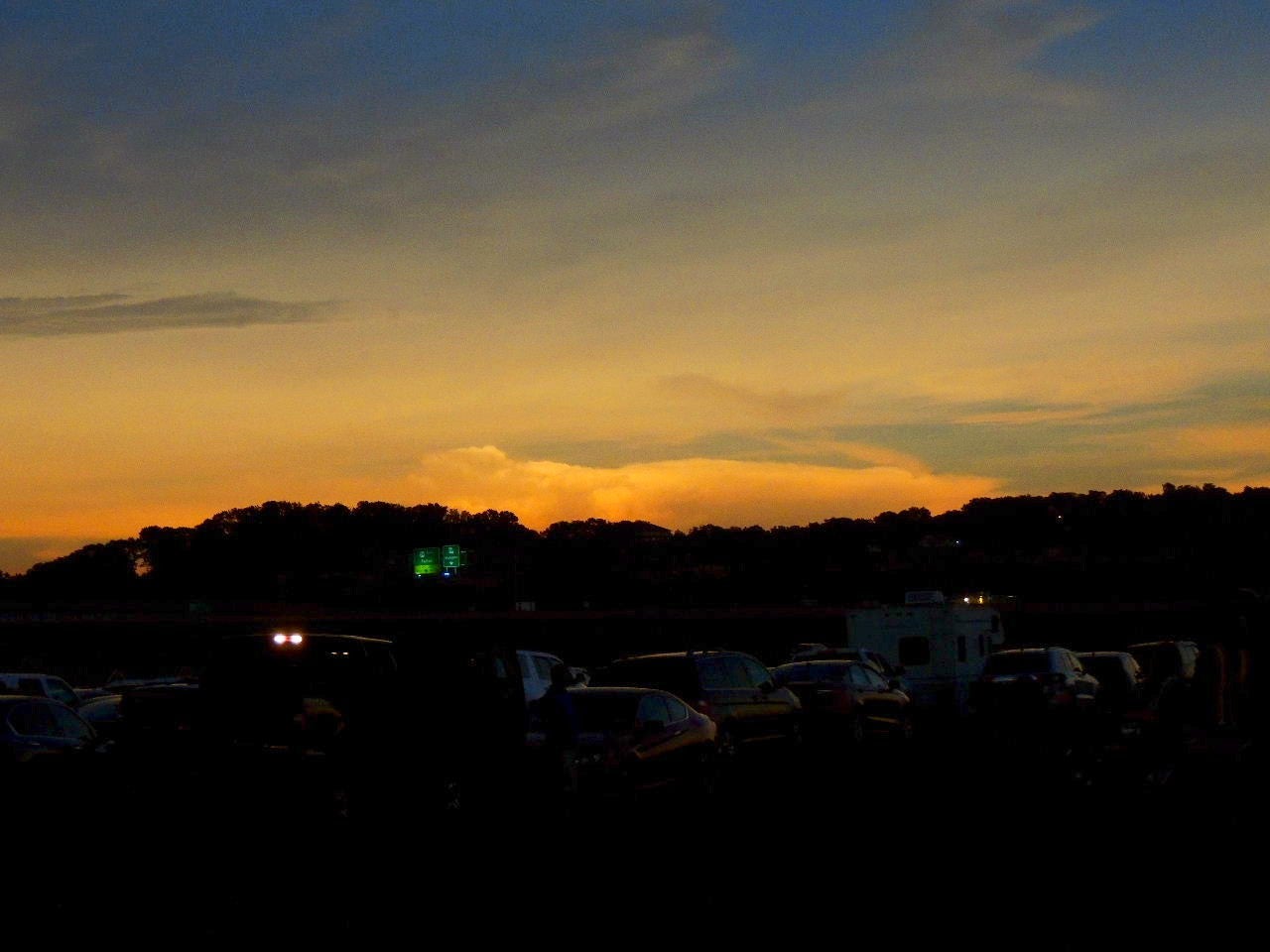 There was a palpable reverent awe as glasses came off, and photos were taken. 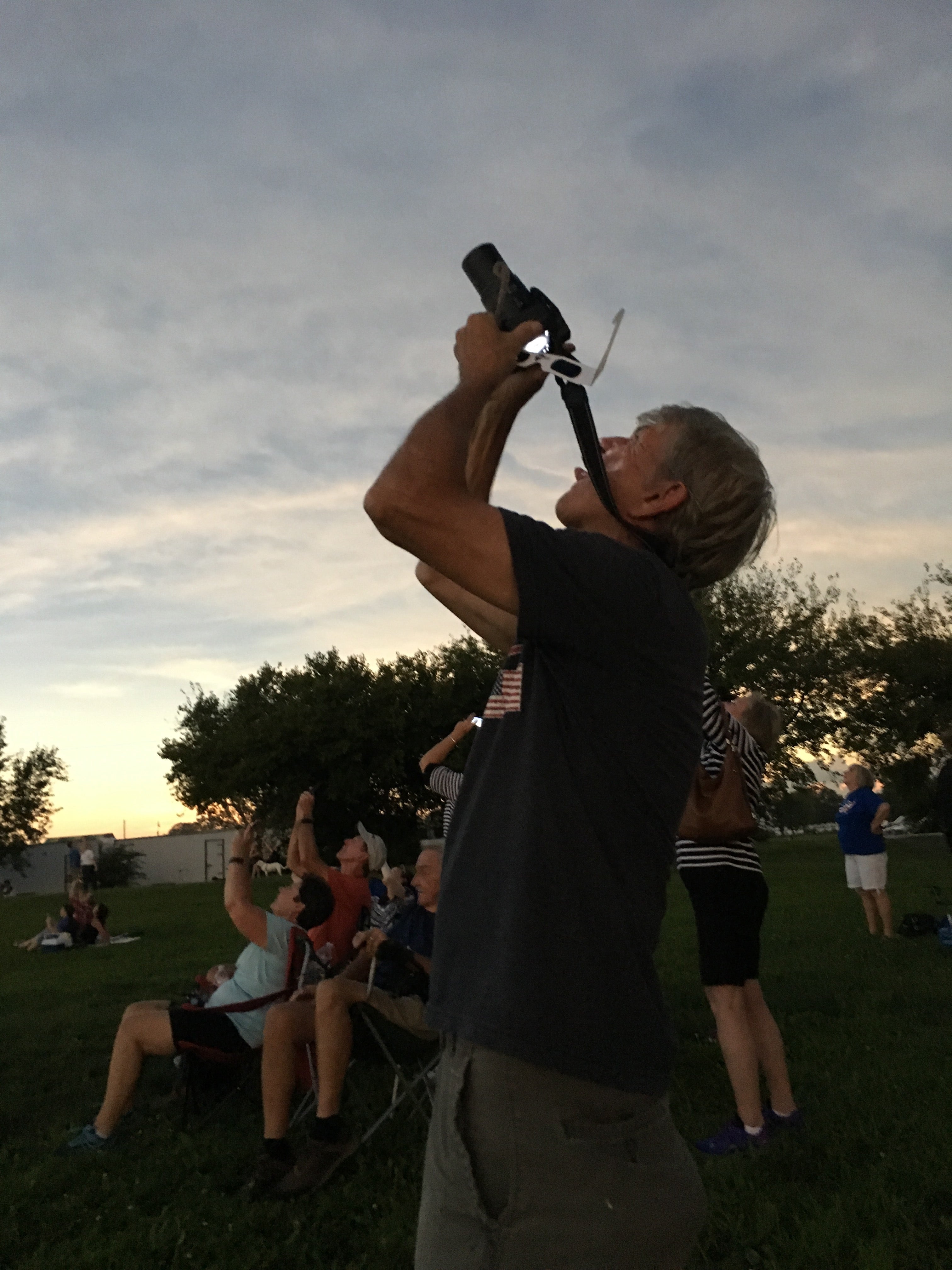 Smiles were everywhere. We were in the shadow of the moon, but we were basking in the moment. The totality was only about two and a half minutes but seemed longer as we surmised our senses were absorbing the experience at a very high level. And then, light reappeared, and the sun started winning this celestial game of hide and seek. The crowd exchanged impressions and thoughts and reviewed each other’s photos. Strangers became friends bonded by a common experience that was anything but common. The emotional, euphoric, endorphin like high lasted about 30 minutes, but the buzz still lingers. 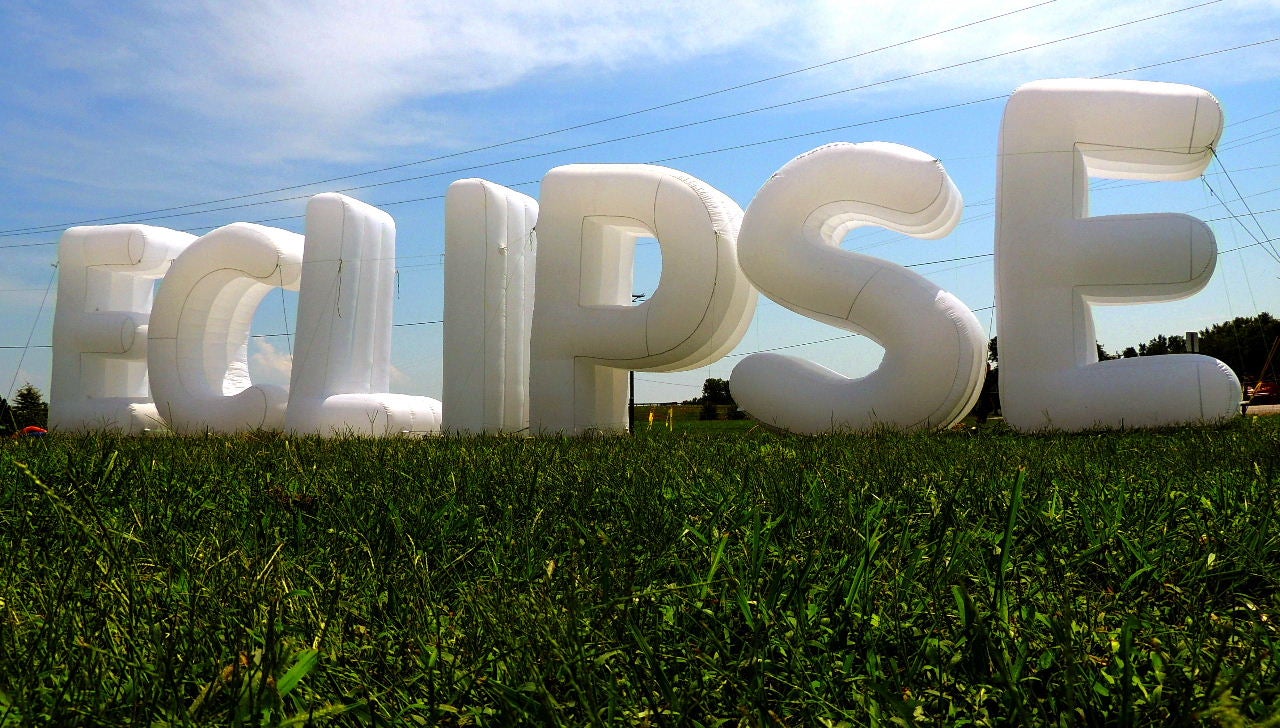 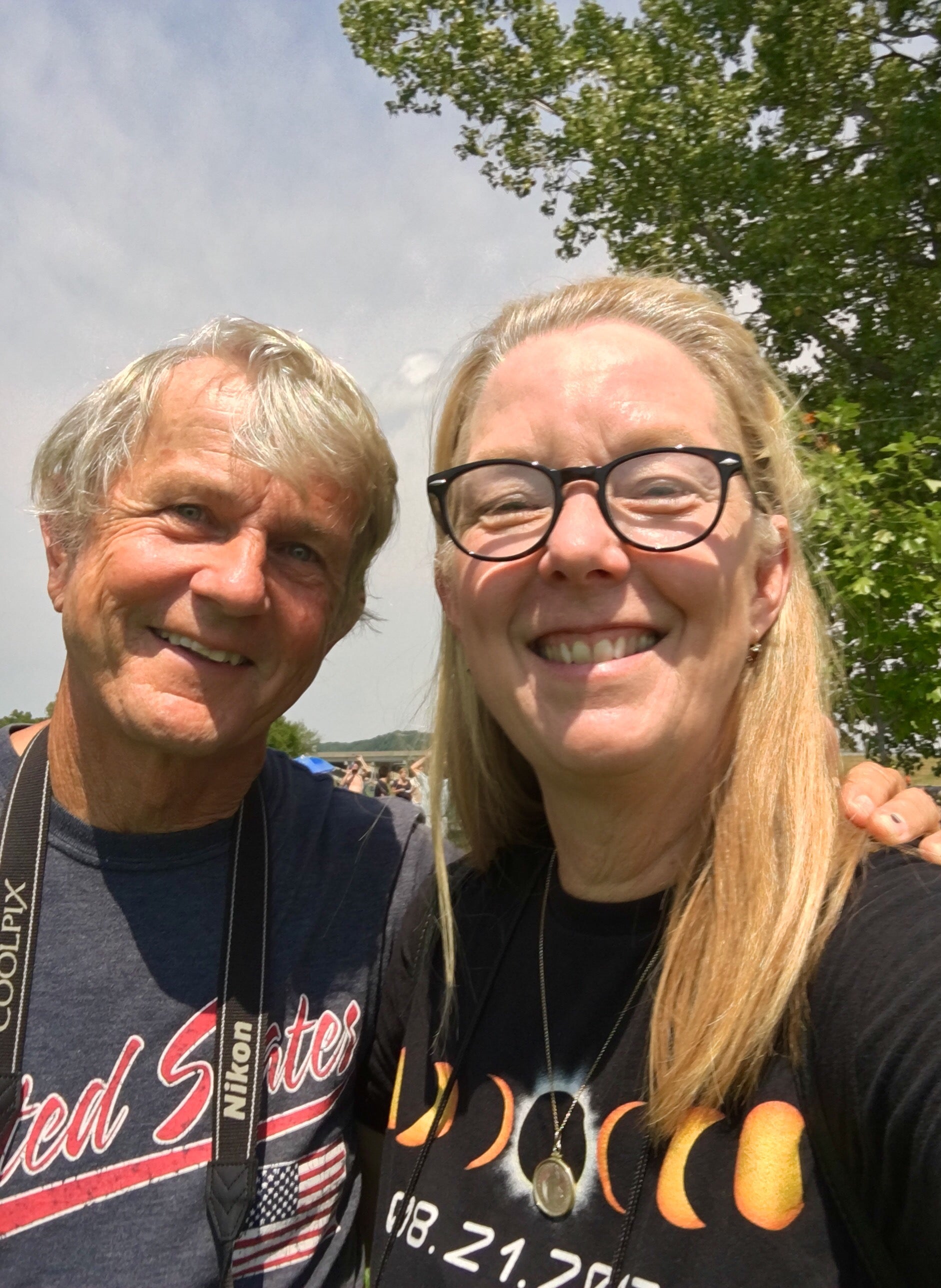 It was awesome and so worth it. We ended up spending 56 hours and going 2020 miles to get our 20/20 view of the 2017 Solar Eclipse. And, if the good Lord’s willing and our warranties don’t expire, we will see you in 2024 when the sun and its lunar friend play tag again. And this time, the big star will be in The Lone Star just west of our front porch. The period of totality will be over 5 minutes long, because the moon will be closer to the earth, and because we just do things bigger in Texas. You only have 6 years, 7 months and 11 days till the next Great American Eclipse, so get your glasses and t-shirts ordered, and y’all come on down. We’ll turn the sun off for you. 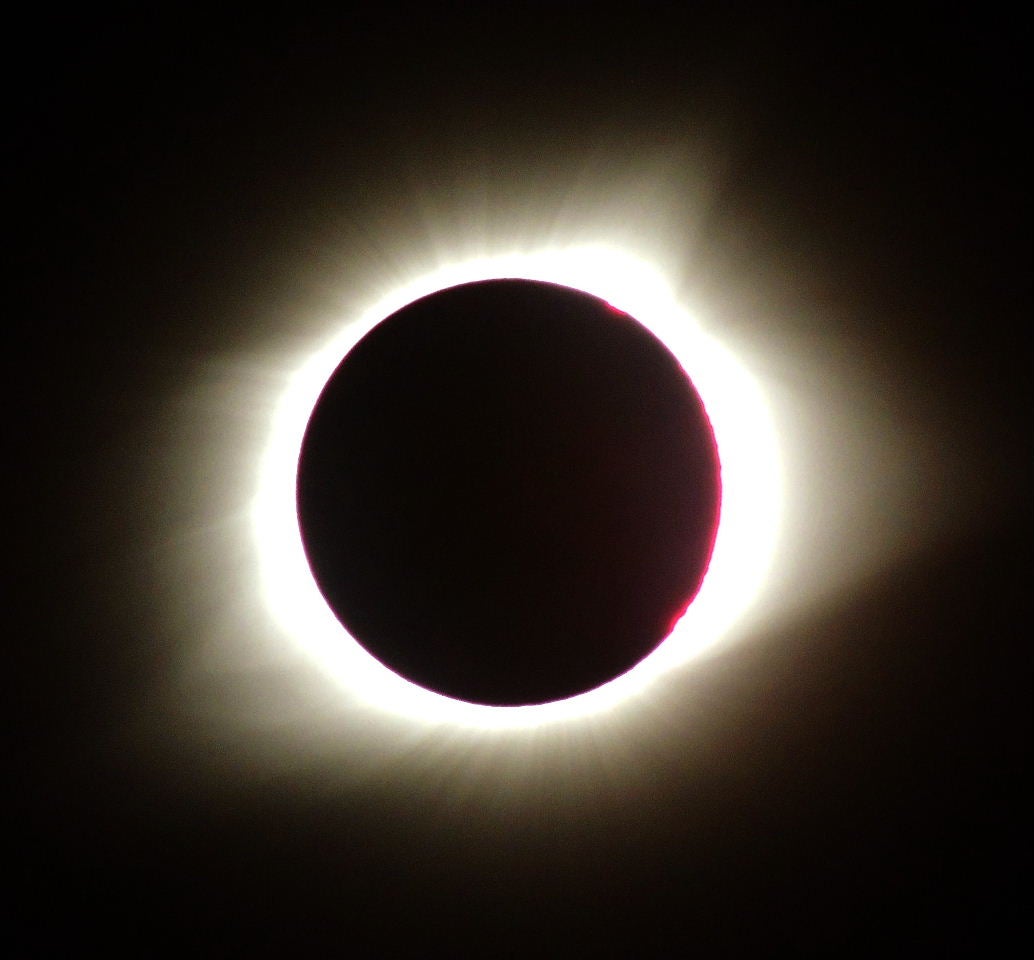 Summer Hull , aka Mommy Points, ran the Mommy Points site for families who want to travel more for less using miles and points for seven years. She now heads up a variety of special projects at TPG when she isn't exploring the world with her own two girls.
You might like
Why a city in Northern Ireland is celebrating the 90th anniversary of Amelia Earhart’s solo flight across the Atlantic
News
8h ago
Edinburgh Airport to get a Plaza Premium lounge this Summer
News
9h ago
Ronald Reagan Washington National Airport renumbers its gates
News
10h ago
Chase Sapphire Preferred® Card