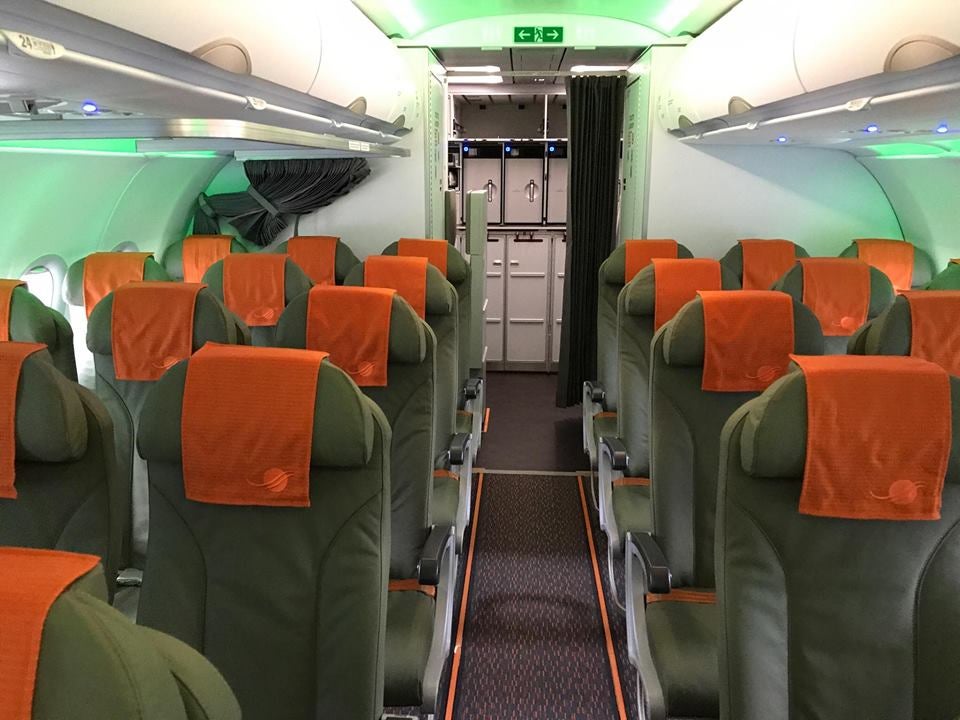 The carrier recently signed a firm order for two A320neo and two A320 aircraft, making it the first African airline to take delivery of the A320neo (when it arrives in October). Its first purchase agreement directly with Airbus also makes Air Côte d’Ivoire a new customer. Earlier this week, I joined the delivery of the airline's first Airbus A320ceo (current engine option).

While it's not a neo (new engine option), the aircraft is fitted with the latest Airbus sharklets, which help to increase range and improve efficiency. It also sports the colorful Air Côte d’Ivoire livery.

Before the official handover, there was a special ceremony hosted by Airbus, with Air Côte d’Ivoire and CFM, the engine supplier for this aircraft.

After the formalities and thank you speeches were given by executives from Airbus, Air Côte d’Ivoire and CFM, the celebration began, as you can tell in this clip I filmed just before the unveiling of the aircraft:

The aircraft is made up of two classes, with 16 business-class seats and 132 in economy. A panel displays the airline's vibrant logo when you first enter the plane.

Here's how I knew this flight to Abidjan wouldn't be a normal one: a full microphone and speaker system had been installed so the party could continue.

Air Côte d’Ivoire's first A320 delivery from Airbus is significant, too, because it's the launch customer for Stelia Aerospace's brand new Celeste business-class seats. There are four rows of them arranged in a 2-2 configuration.

These are cocooning seats, designed for short- and medium-haul hops of up to six hours, offering a deep recline position of 40 degrees (equivalent to 11.5 inches) and a fixed-back seat shell. The legroom is generous, with a seat pitch of approximately 40 inches.

The seats are upholstered in dark grey and vibrant orange — the colors of the Côte d'Ivoire flag — and the headrest can be molded around passengers' heads for added comfort.

Each seat comes with a fixed, seat-back in-flight entertainment screen. In the front rows, these can be stowed and released from the center console.

In-flight entertainment screens are 16 inches wide and offer a universal headphone jack and USB port for charging. The menu is simple and clean, with music, TV, movies and survey being the only four options.

There were six movies loaded into the IFE system, including First Class, Lord of the Rings and Mrs. Doubtfire, among others.

In addition to the movies, there were 11 TV shows onboard, including The Big Bang Theory and African Chronicles.

Note that in-flight entertainment is only available in business class, which is a big shame for passengers flying in economy. Opposite the center console of each seat is a small storage area and a cubby-hole for a water bottle. The seat recline is manual, much like that of an economy seat — just hold down the button, push back and the bottom part is brought up to support your legs.

Another sweet gesture was how the Air Côte d’Ivoire team had small flowers placed in the cabin side-wall panel connection brackets.

Another interesting design element was how the airline's logo was featured in grey-scale on the bulkhead wall. It was a nice touch and definitely a good choice to opt for greyscale rather than more of the vibrant orange and green colors.

What I really love about the new single-aisle Airbus aircraft is the extensive cabin mood-lighting options that are available. Air Côte d’Ivoire used it to illuminate the cabin in the colors of the Ivory Coast flag. I think this is a feature that many Air Côte d’Ivoire passengers will be very impressed by, especially given the lack of new planes flying in West Africa.

There are 132 economy seats arranged in a 3-3 configuration.

Bulkhead seats offer more legroom, while the rest of them have a seat pitch of 31 inches and are 18 inches wide.

Seats are upholstered in the same green leather, with an orange cloth covering the headrest, which, like in business class, can be molded for extra comfort.

Note that a curtain rail has been installed over the last three rows by seats D, E and F of the cabin. With the curtain opened and extended, this can become a crew rest area, if needed.

The seat-backs are designed to enhance space for each passenger and feature a fixed hard shell back to store magazines, as well as an integrated cup-holder and a regular seat pocket. The seats were comfortable, especially when reclined.

As a I mentioned earlier, there is no in-flight entertainment available if you're flying in economy — not even drop-down overhead screens — which is a huge shame, however, as indicated by the overhead panel, Wi-Fi is available onboard the aircraft via OnAir. It's currently free, although that could change once the aircraft enters commercial service. Here's a peek at the wing, which features the airline's logo on the sharklets.

This is a really significant delivery to a fast-growing African airline. The cabin is the first to feature Celeste business-class seats by Stelia Aerospace, while the overall design of the interior is authentic, colorful and reflects the patterns and vibrancy of this West African nation. It's great to see Air Côte d’Ivoire include mood-lighting in the purchase of its aircraft and the addition of onboard Wi-Fi is also more good news for passengers.

As you can see in the video below, the party at the Airbus delivery center to celebrate the new plane was in full swing long after the new A320 aircraft for Air Côte d’Ivoire had been revealed. Cheers to the new A320!

Related stories
Should you do a mattress run for hotel points or elite nights?
This might be the best Amex card combo: Amex Gold and Amex Business Platinum
What it's like to take a once-in-a-lifetime trip to Finland’s Arctic to see Santa
8 mistakes to avoid when redeeming hotel points

Our points-obsessed staff uses a plethora of credit cards on a daily basis. If anyone on our team wouldn’t recommend it to a friend or a family member, we wouldn’t recommend it on The Points Guy either. Our opinions are our own, and have not been reviewed, approved, or endorsed by our advertising partners.
See all best card offers
Related stories
Guide
Should you do a mattress run for hotel points or elite nights?
Guide
This might be the best Amex card combo: Amex Gold and Amex Business Platinum
News
What it's like to take a once-in-a-lifetime trip to Finland’s Arctic to see Santa
Guide
8 mistakes to avoid when redeeming hotel points