A time honored vacation tradition, even well before that advent of a smart-phone-camera in every pocket, was to ask a kind stranger nearby to snap a family picture for you as you posed in front of a castle, monument, beach, or wherever. The alternative, unless you travel with a tripod and an automatic camera setting (which iPhones have), was that at least one person was always missing from the photo. That’s fine most of the time, but in at least one photo, it is nice to have everyone present and accounted for. I know in our case, Josh’s whole side of the family is usually only able to get together once a year, so it is nice to have it captured as proof that it actually occured.

Now, you never knew how those ‘kind stranger’ photos were going to turn out, but you usually just hoped for the best and assumed the worst. I’m not a professional photographer by any stretch, but some people are really terrible at taking simple photos. I happen to be married to one such otherwise talented person. At least with iPhones and digital cameras, the good news is that you now know instantly whether you got something half-way decent or not. And so it was on our current family trip to Rhode Island that we packed up the 10 of us and headed to the beach around sunset to try and get at least one halfway decent photo with everyone in the shot. You can imagine how thrilled most folks are by this sort of post-dinner field trip.

Naturally, the beach was completed deserted when we arrived. 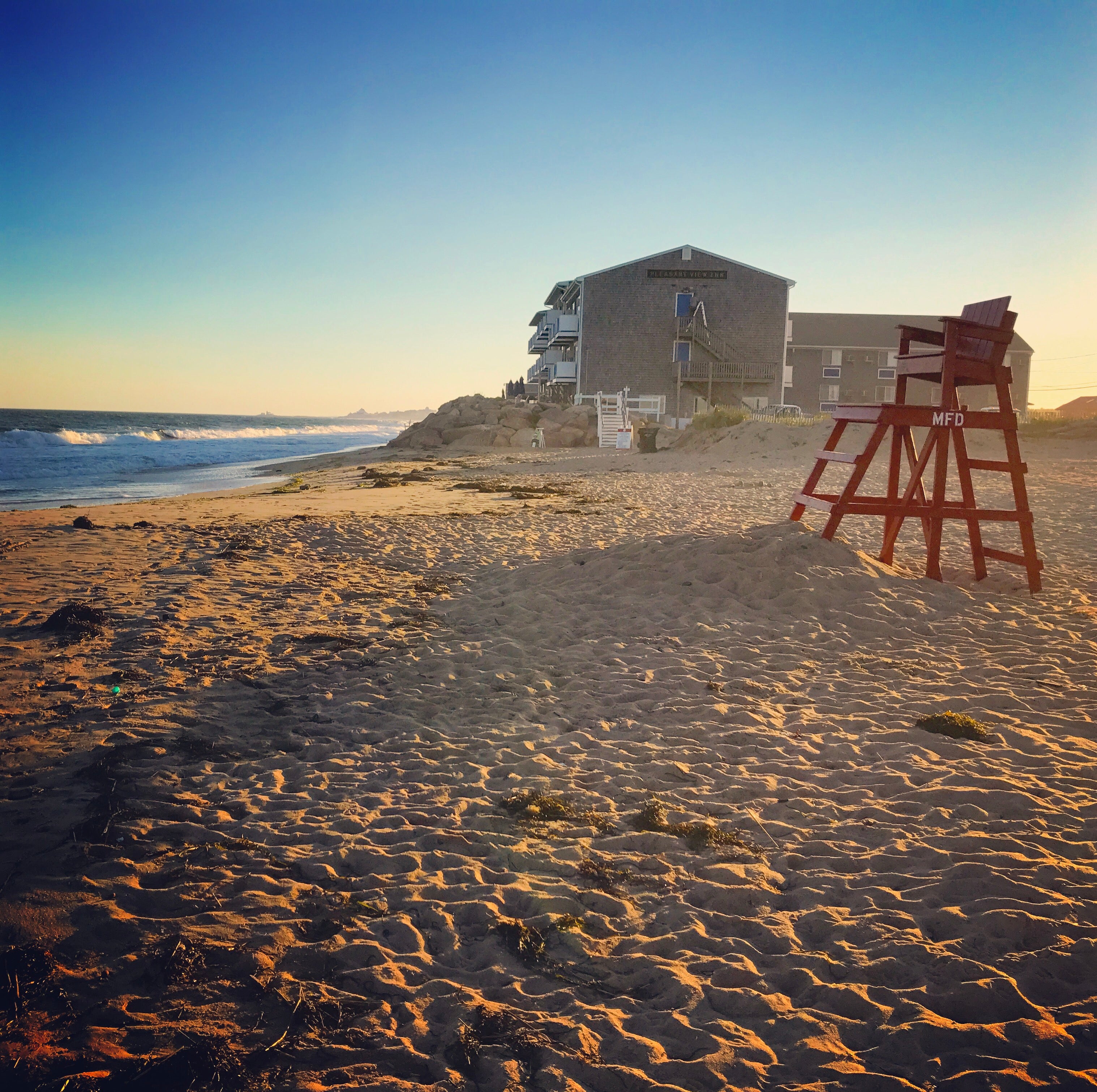 This was great for fun and nice pictures, but not so great when you needed someone to push the button on the camera. Because I don’t trust ‘nice stranger’ photos to work out, I took one with everyone in it but me while we waited for someone to walk by so we could ask them to snap the photo for us. 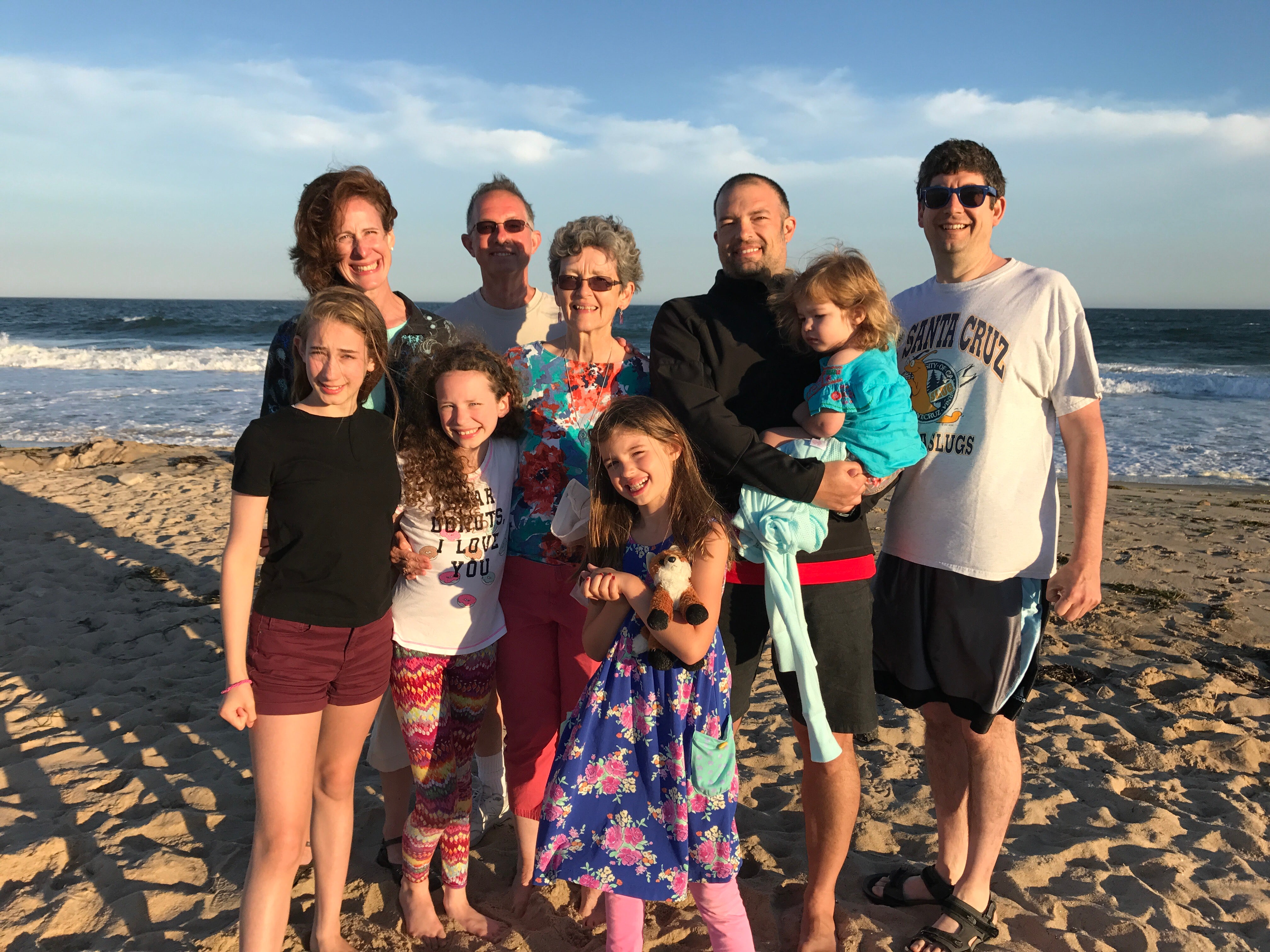 Knowing the light was fading fast and this was scheduled to be our last evening together since my crew of four was to return to Texas today, when no one really came by within a few minutes of waiting around, my brother-in-law headed up to the neighboring restaurant/bar to see if someone out on the balcony might be willing to come down for a minute to help us out. He found a nice lady who was willing to take the photos, and so we all got into position to smile for posterity.

We should have known interesting photos may lie ahead when this was the first one taken. 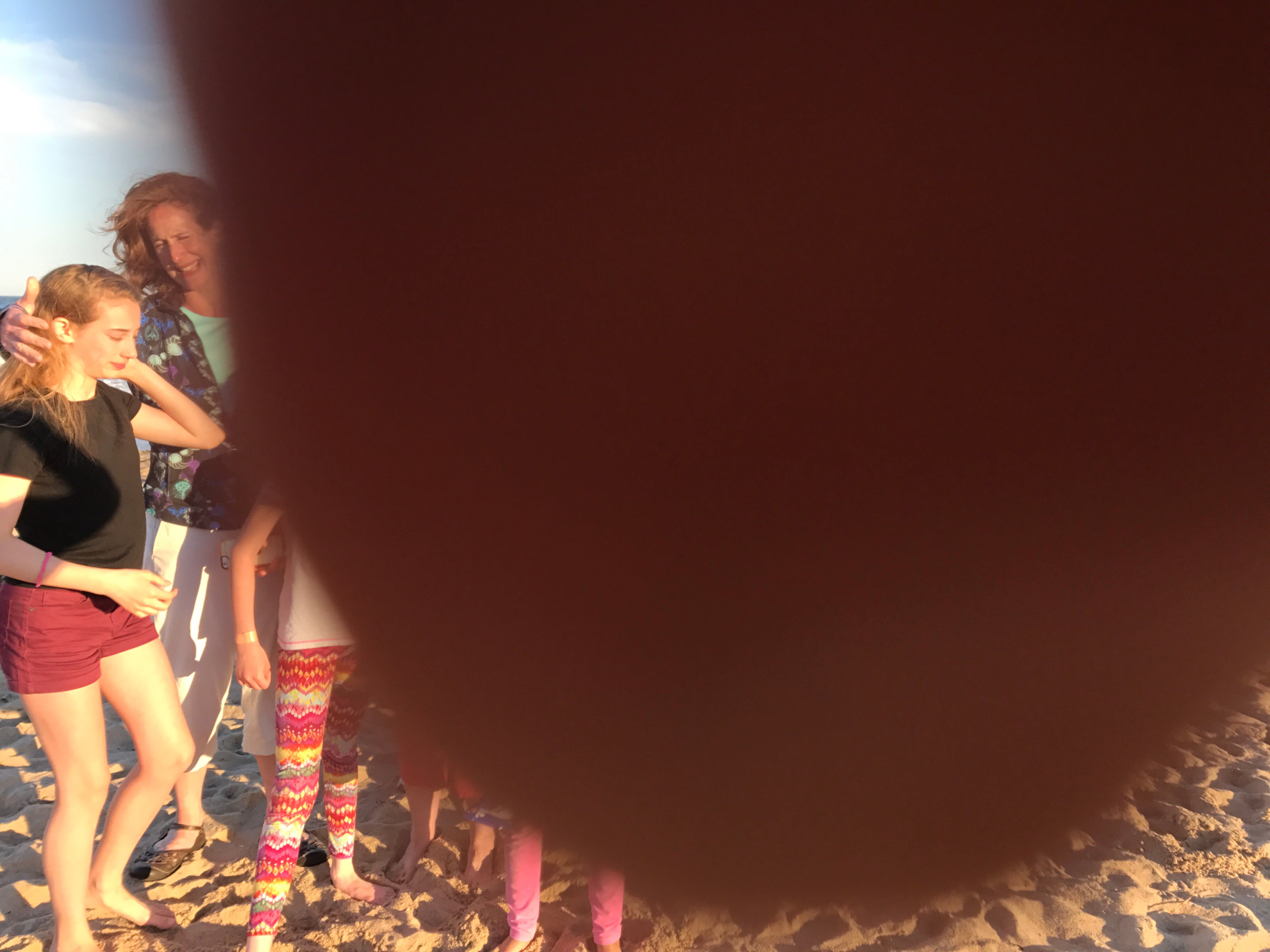 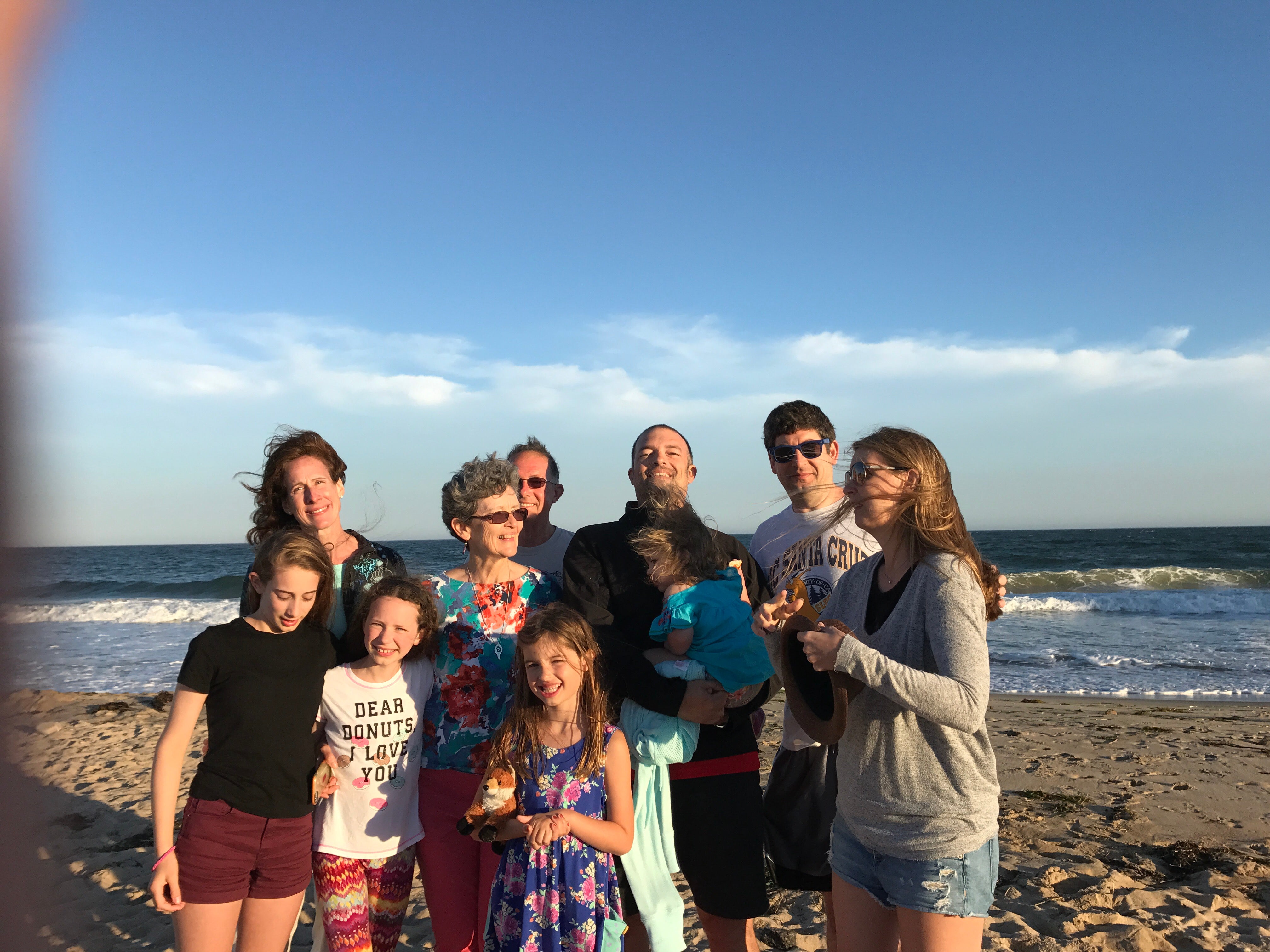 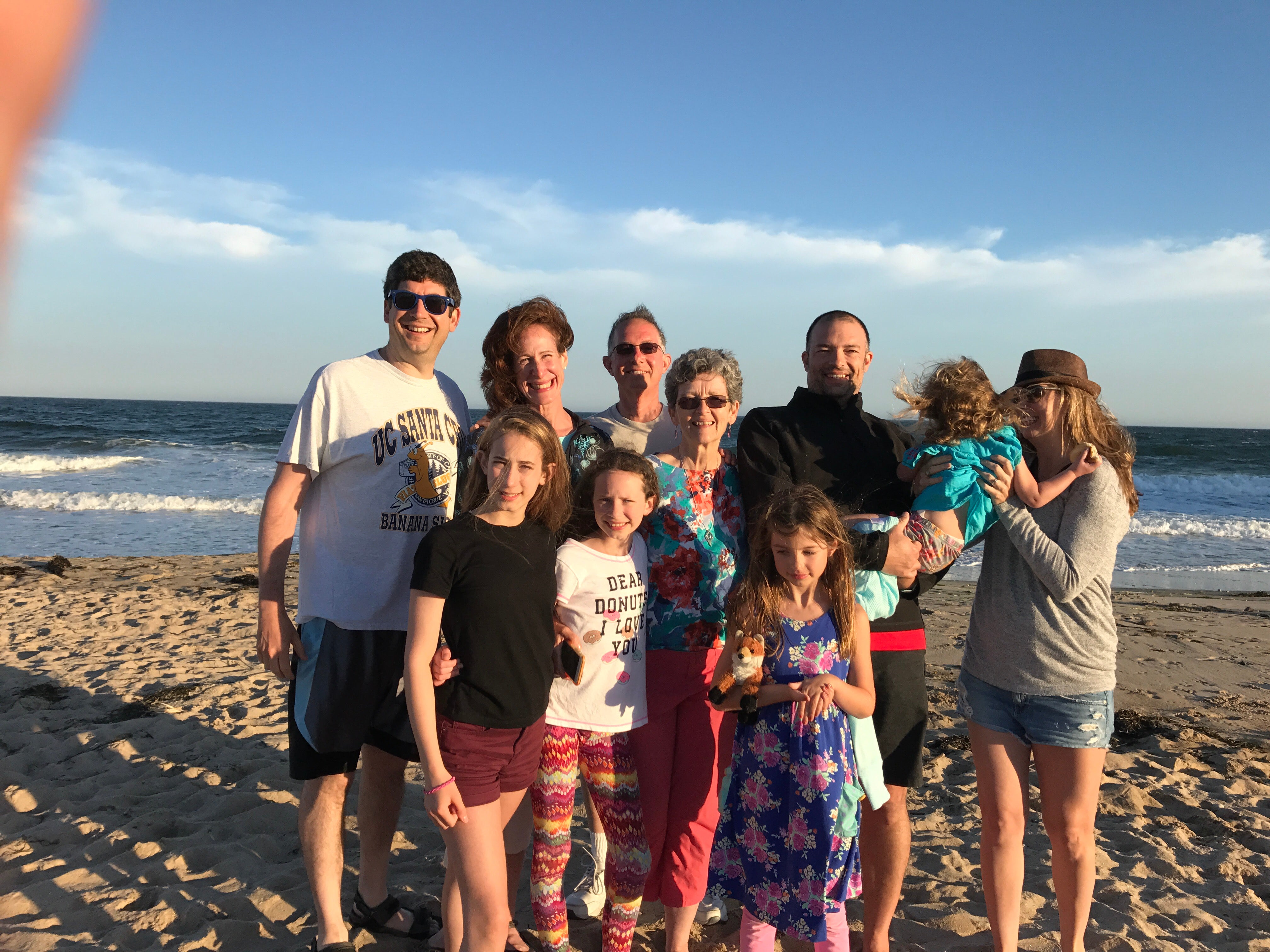 Now in fairness, my hat and my baby were part of the problem. However, there was no “on three” or “say cheese” or “look this way” or anything. I’m not sure we even knew she was ready for us, but then things started to get more fun as we were more or less all set, and our ‘kind stranger’ started putting one foot backwards, and then another, and then another. 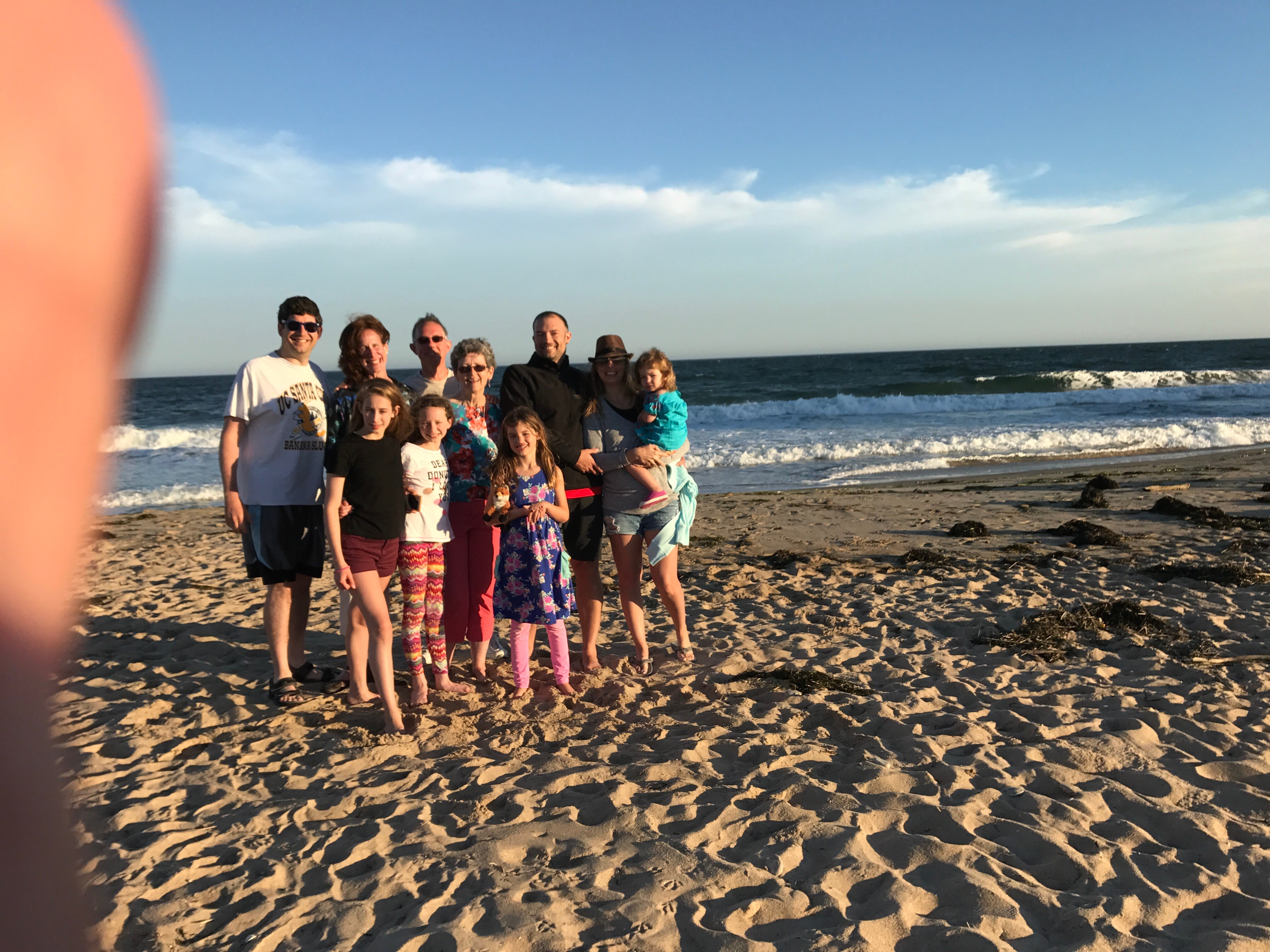 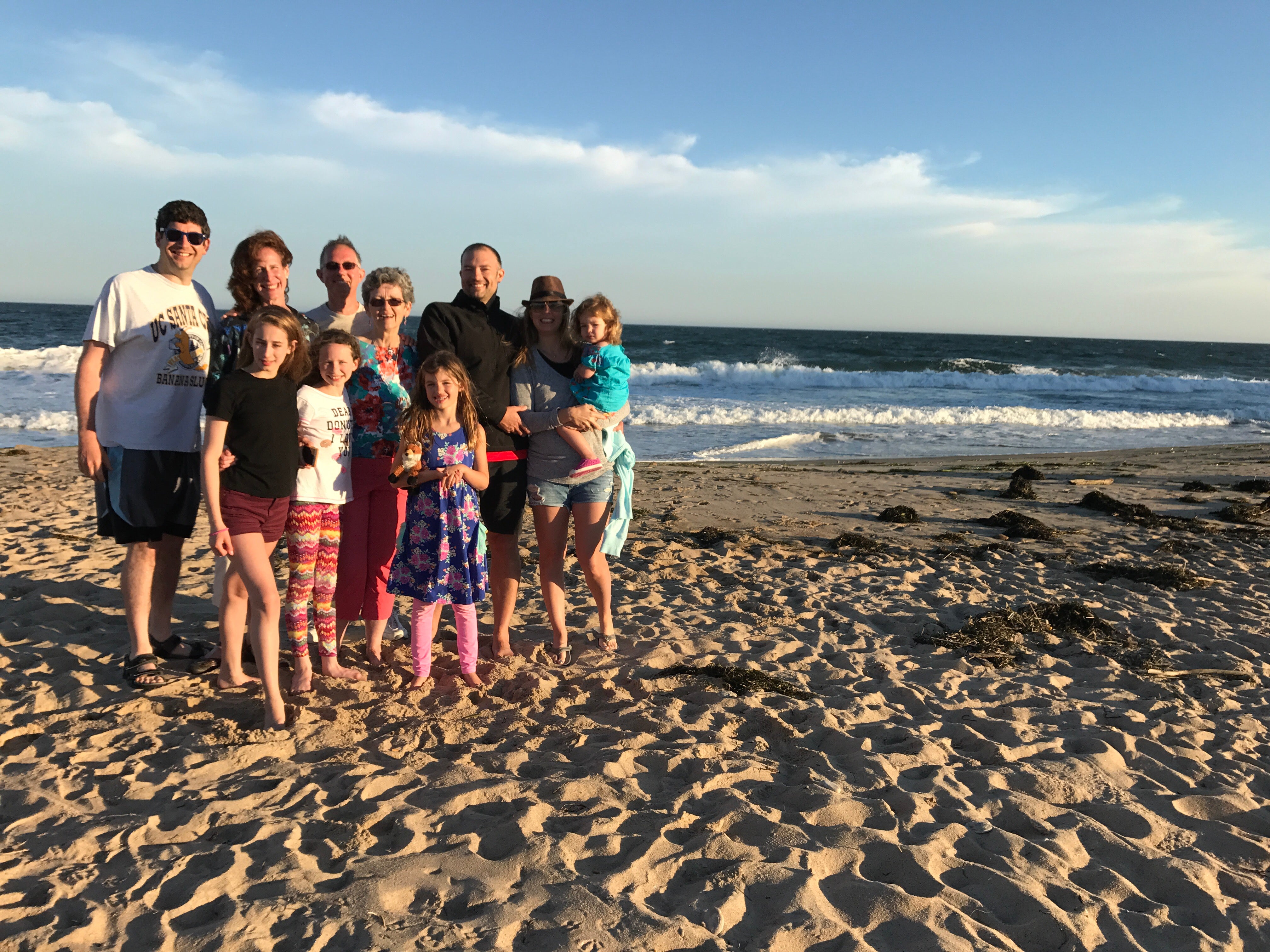 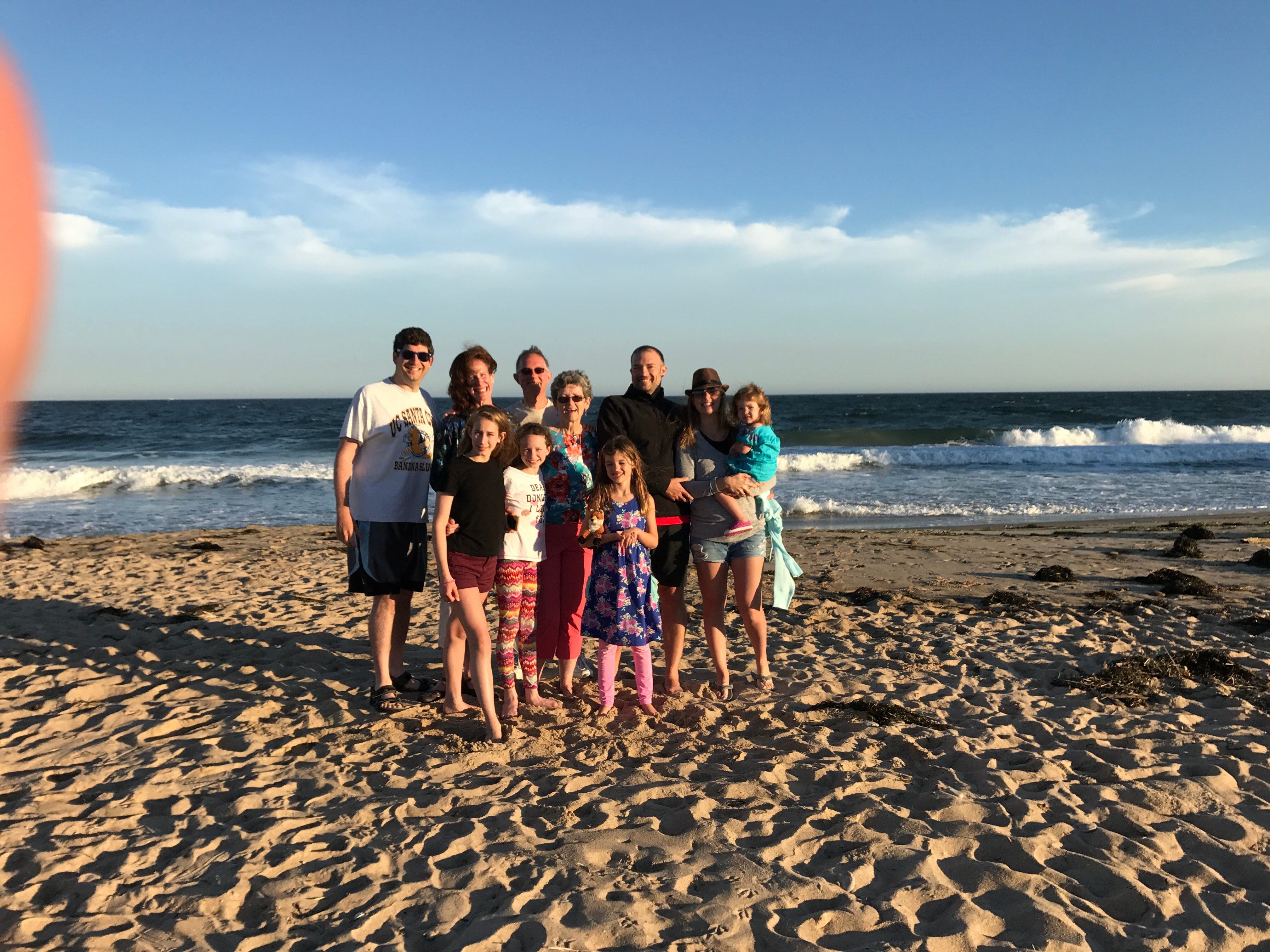 She was not only getting further away, but stumbling a bit back and forth as she headed away from us. It is then I realized my dear brother-in-law had likely found a ‘kind stranger’ from the bar portion of the restaurant. As the ‘kind stranger’ continued to back pedal further and further away from us with my phone, we called it good. I wasn’t sure she was about to take off with my phone, but it didn’t seem out of the realm of possibilities given what was going on. Outnumbered at 10 : 1 and stumbling, I wasn’t too worried about her chances of success, but it was time to end this round of family fun and just hope we could edit at least one photo into something workable. 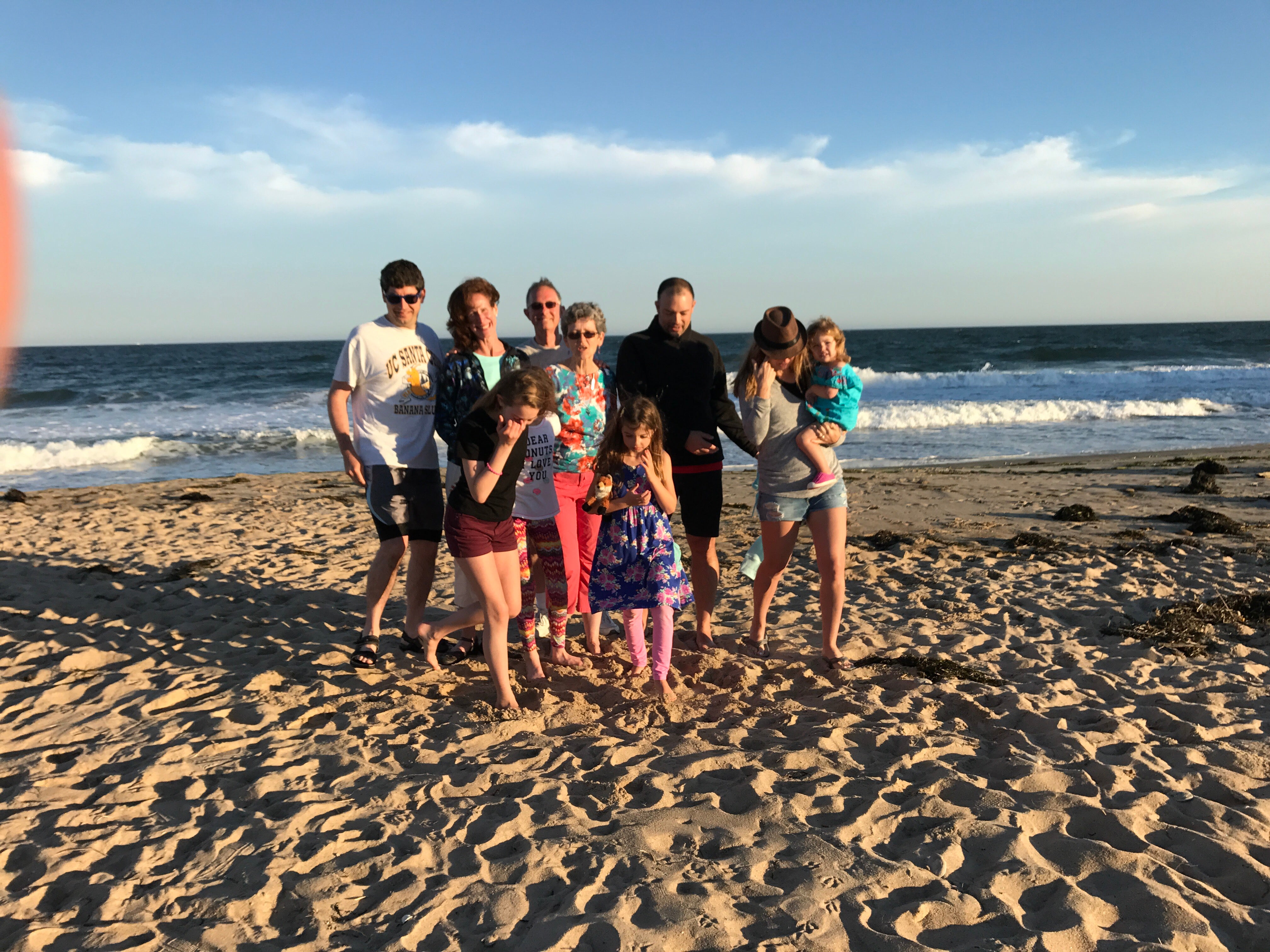 However, she wasn’t quite done kindly documenting our evening for us. At this moment my oldest daughter decided she thought the ‘kind stranger’ was not to be trusted and needed to promptly hand mom’s phone back over. So, she started gunning for her….as seven year olds apparently do. 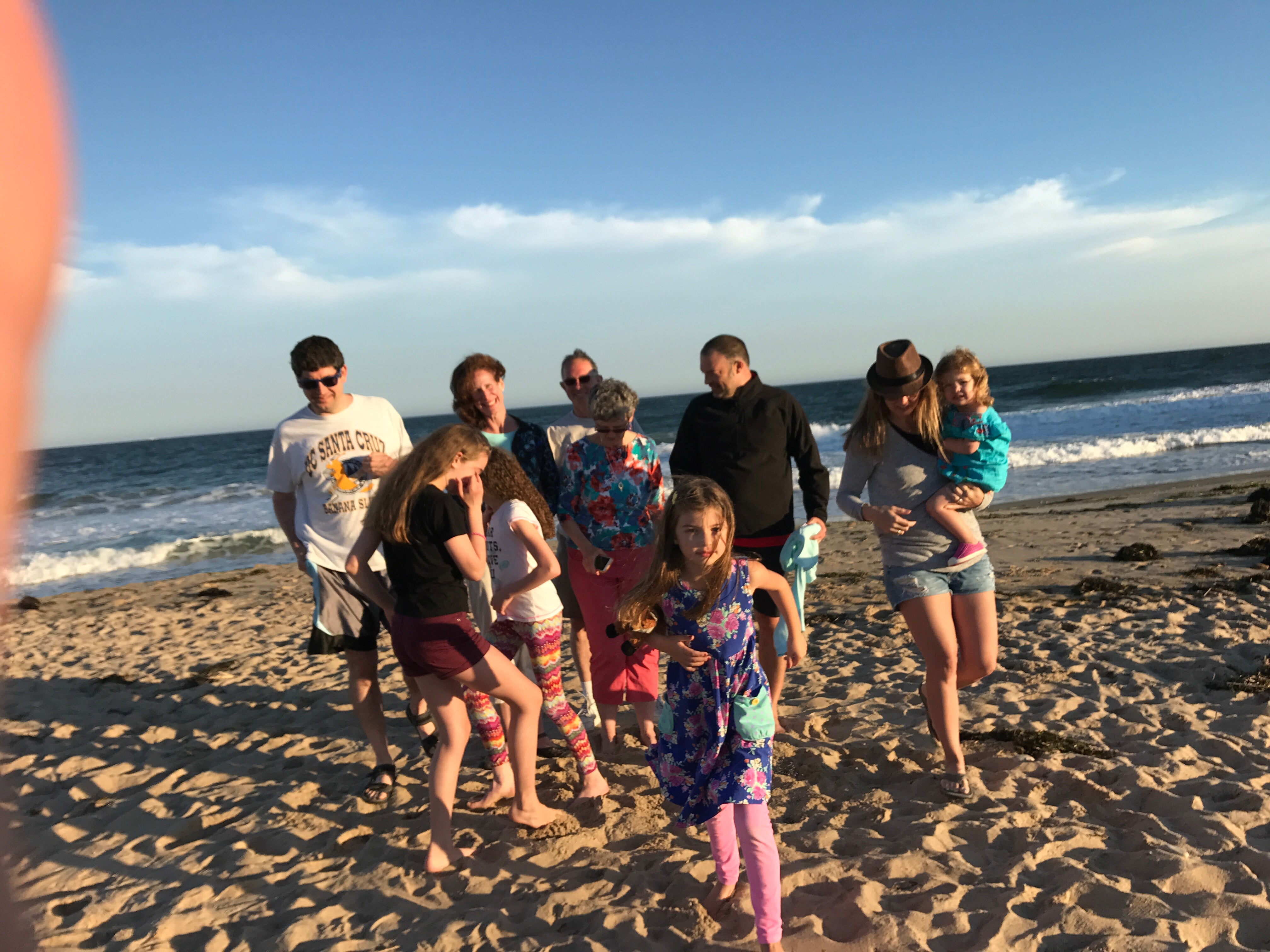 As you can tell by the photos, I was pretty much unaware that this hot pursuit was starting up. 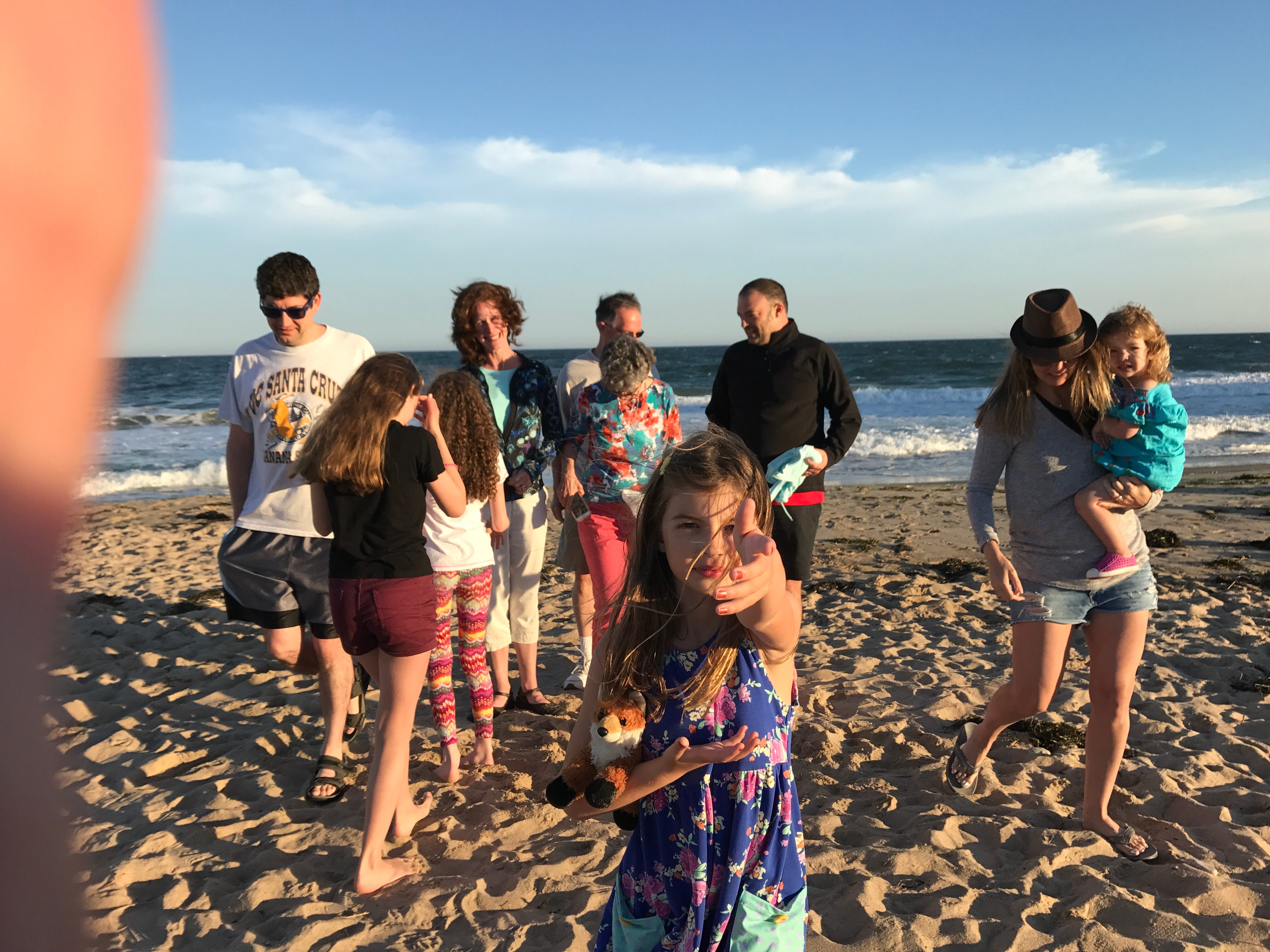 There was to be no negotiating with the seven year old on a mission who was clearly the one running the show at the moment. She was taking back control of the phone from our stumbling friend while the rest of us scattered. 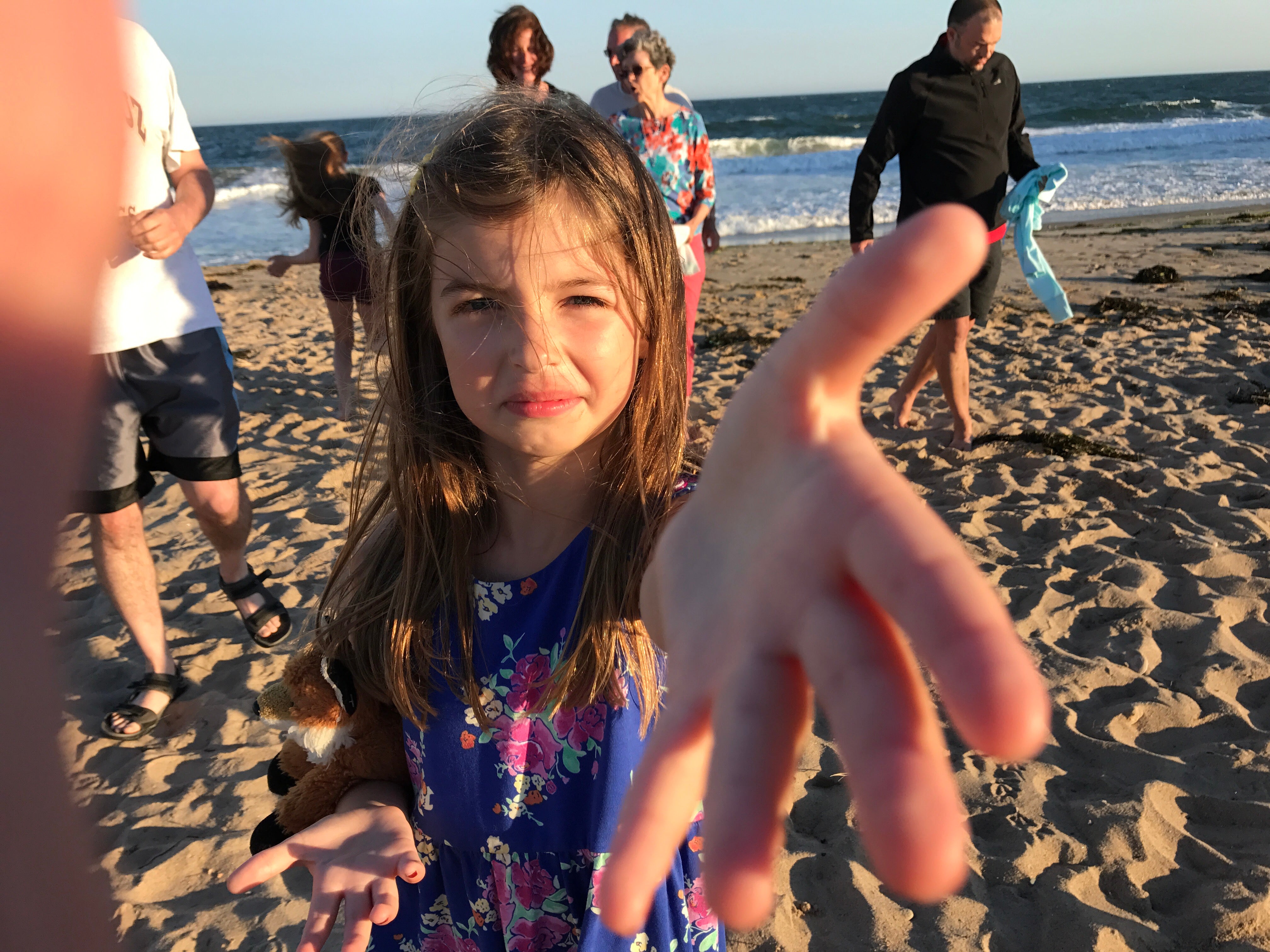 In the end, I was able to edit out her finger and we got this. Much better than nothing, but not nearly as good as the story behind it. 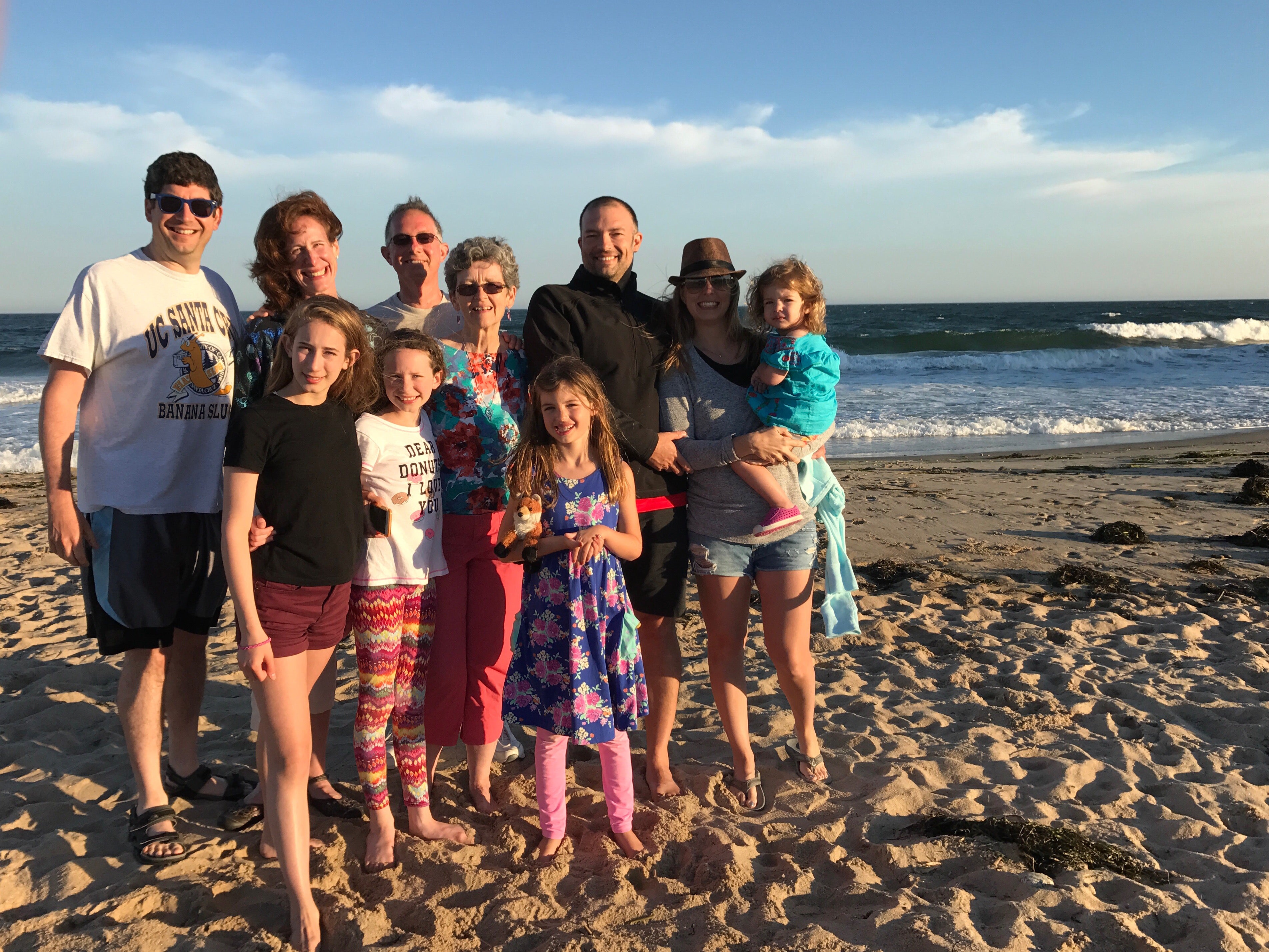 Next time perhaps I should investigate a travel tripod, or just hire my friend Andrea Bacle who does travel photography and really specializes in family beach shots. Actually, I tried. She was booked.

Of course, getting some family shot is always better than getting no shot, but perhaps you should recruit someone to operate the camera who has taken fewer shots.

I’d love to hear about your family vacation #photofails!

Summer Hull , aka Mommy Points, ran the Mommy Points site for families who want to travel more for less using miles and points for seven years. She now heads up a variety of special projects at TPG when she isn't exploring the world with her own two girls.
You might like
Virgin Atlantic quietly removes the ability to view Flying Club award availability by month
News
11m ago
American adds 6 new routes as part of Northeast Alliance tie-up with JetBlue
News
1h ago
Quick Points: How to use retention offers for extra points and miles
News
2h ago
Chase Sapphire Preferred® Card