My daughters only have two first cousins, and they happen to live many states away in Connecticut. While they have several second cousins that we absolutely adore and we sort of pretend are first cousins, at the end of the day, we make it a priority our girls together with their two Connecticut cousins at least twice a year. Our girls also happen to be their only first cousins, so that helps keep this gathering high on the priority list for all of us.

One of our yearly cousin visits is typically a short meet-up in NYC around the holidays, but usually once per summer we get them together for a longer stretch of time so they can hang out, play, and really get to know each other even though they are different ages and live over a thousand miles apart. Last year we all went to Hyatt Lost Pines located near us, and this year it was their family’s turn to pick where we went. They decided on a city in Rhode Island pretty close to their home in Connecticut.

No one in my family of four had ever been to Rhode Island, so it was pretty exciting to head somewhere new, even though it is admittedly a little tough for me to totally turn over control of planning a trip and lodging to someone else. However, my brother-in-law did a great job finding a rental property that was actually two cottages on one plot of land located just a two minute walk from the beach in Westerly, Rhode Island.

While I adore family, it is no secret that sharing space with many people for several days can get to be a bit tough, especially when there are different sleep schedules, work and conference calls that still need to happen, etc. Having two houses together was the absolutely perfect way to be together, but not too together to the point where things can get prickly after a few days.

To get to Rhode Island we bought fairly priced nonstop United tickets into Boston many months in advance (well, other than the one ticket we bought literally on the way to the airport). I’ll write a separate post about flying with a two year old soon, but after roughly four hours in the air we landed in Boston without incident. Our rental car cost about $240 and was booked originally via Hertz, but then Autoslash found a better deal that we went with via National and Priceline. When we extended our trip by a couple days thanks to a tropical storm that granted a weather waiver with United, that tacked on another $120 to the rental car price, for a total of about $360 for the week.

This was my first time in a long while renting with National, but thanks to having The Platinum Card® from American Express we were able to access Emerald Club Executive status and pick anything on the Executive Emerald Aisle for no additional fee even though we only rented a mid-size. They had several good SUV choices on that aisle, but we went with the three row vehicle with just a few thousand miles on it shown below so we could fit the cousins and all in with us if we wanted to, which turned out to be really helpful for outings. Our experience with National was great, so I fully intend to use them more in the future when the price is right.

After a roughly 90 minute drive from Boston to Westerly, Rhode Island (and one stop for drive-thru $8.99 lobster rolls), we arrived at the beach cottages. I really didn’t know what to expect, so I was thrilled with how adorable everything was as we arrived for our mid-June stay. Above you can see the first cottage with the second peeking out from behind. The only thing separating them in the middle were a few dozen feet these hedges my girls loved running through. 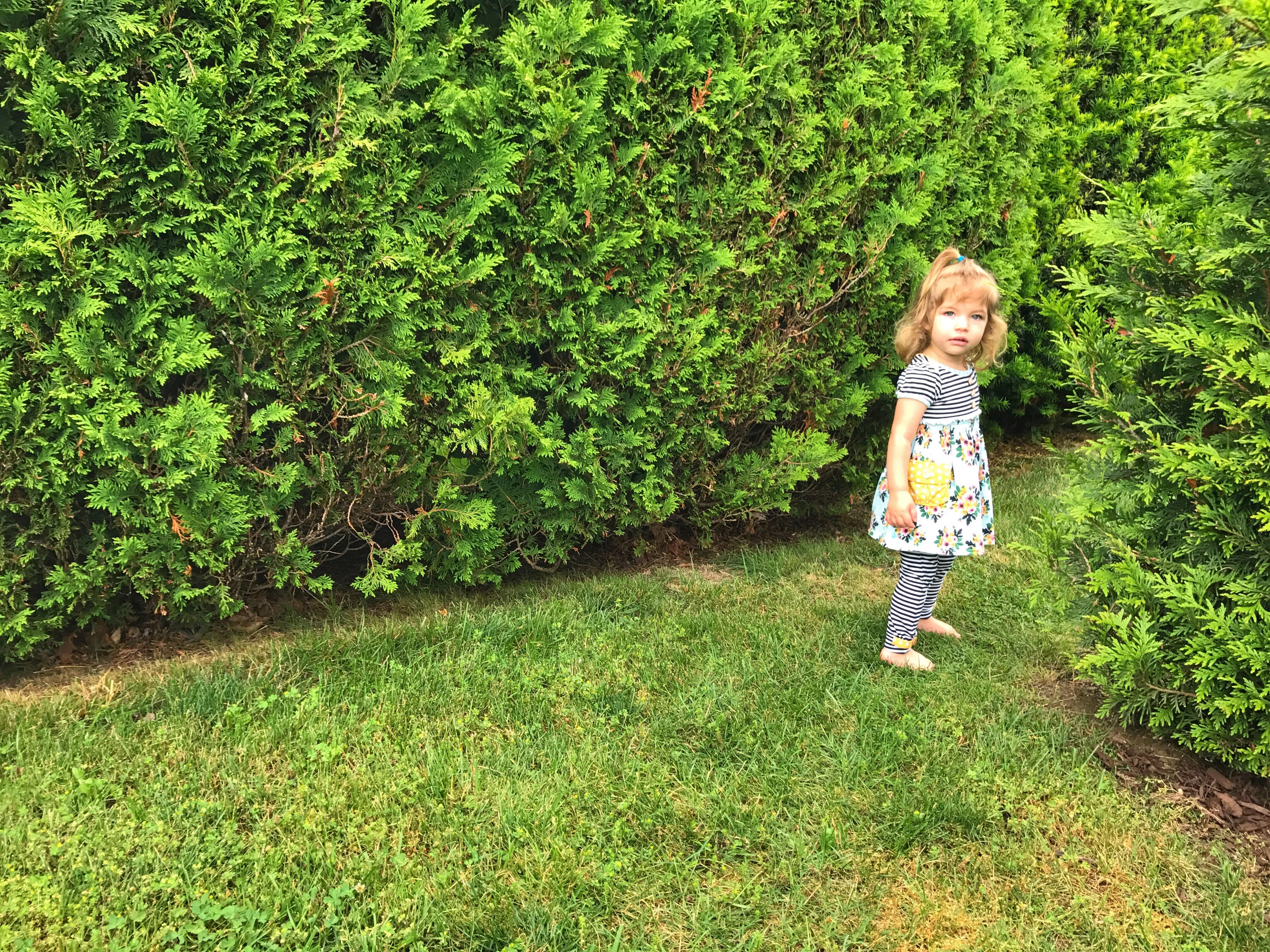 Each cottage had three bedrooms and one bathroom, with one of the bedrooms in each house consisting of two twin beds and the others having double beds. I didn’t take take pictures of every single bedroom, but they were all unique, comfortable, and so relaxing. In addition to the indoor showers, there were also outdoor showers with hot water. There was no bathtub, so the baby got some sink baths on this trip. 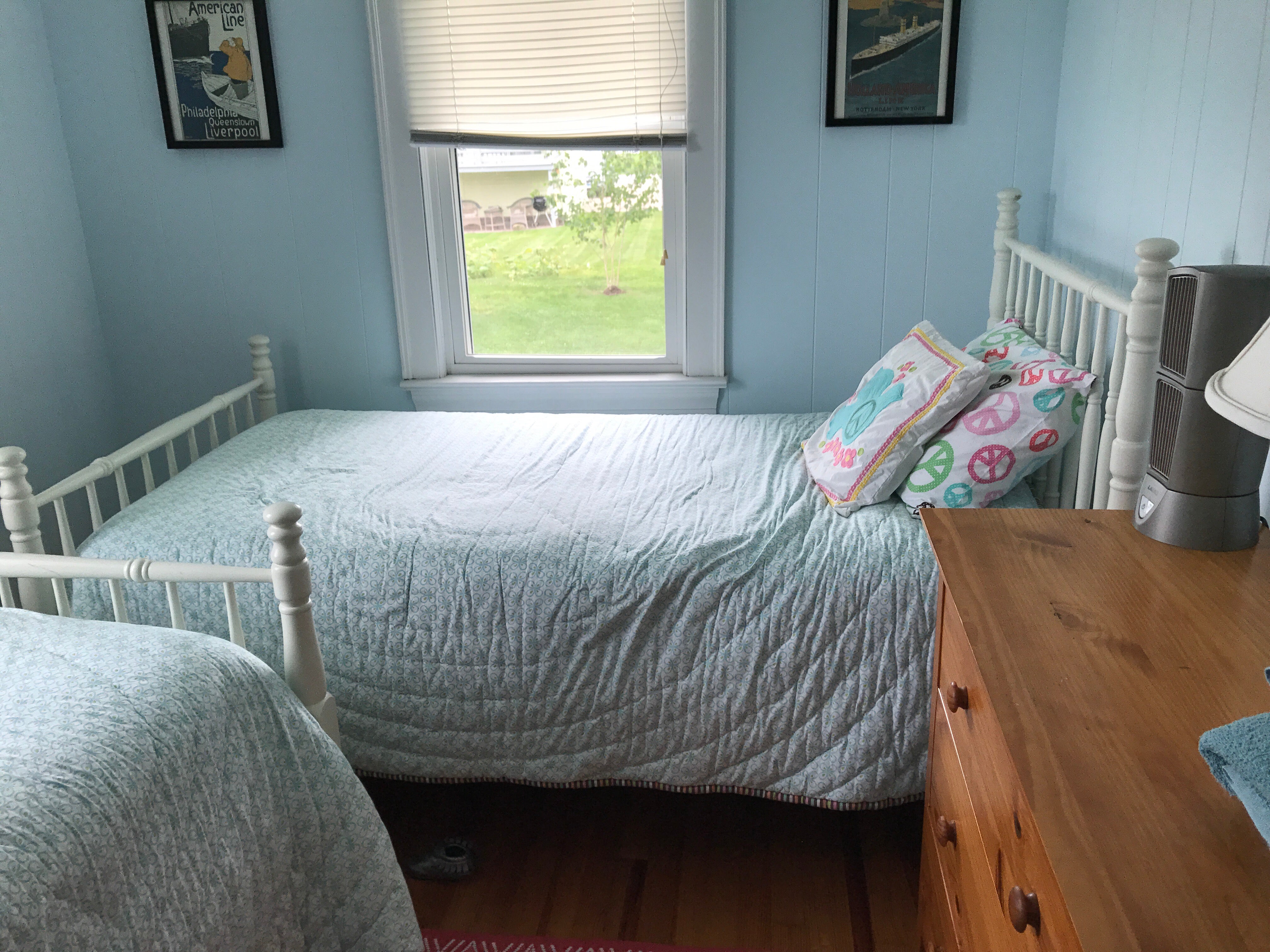 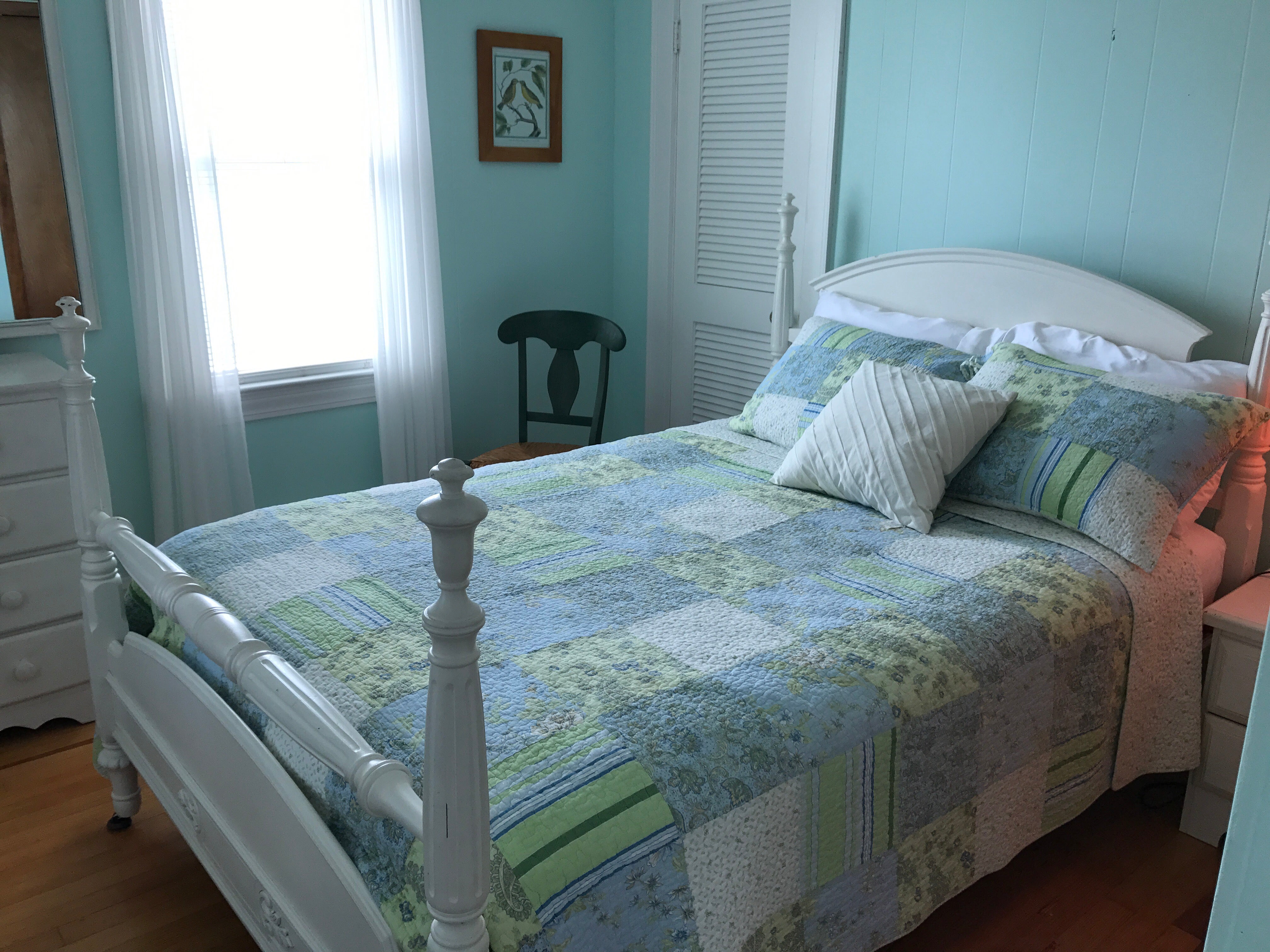 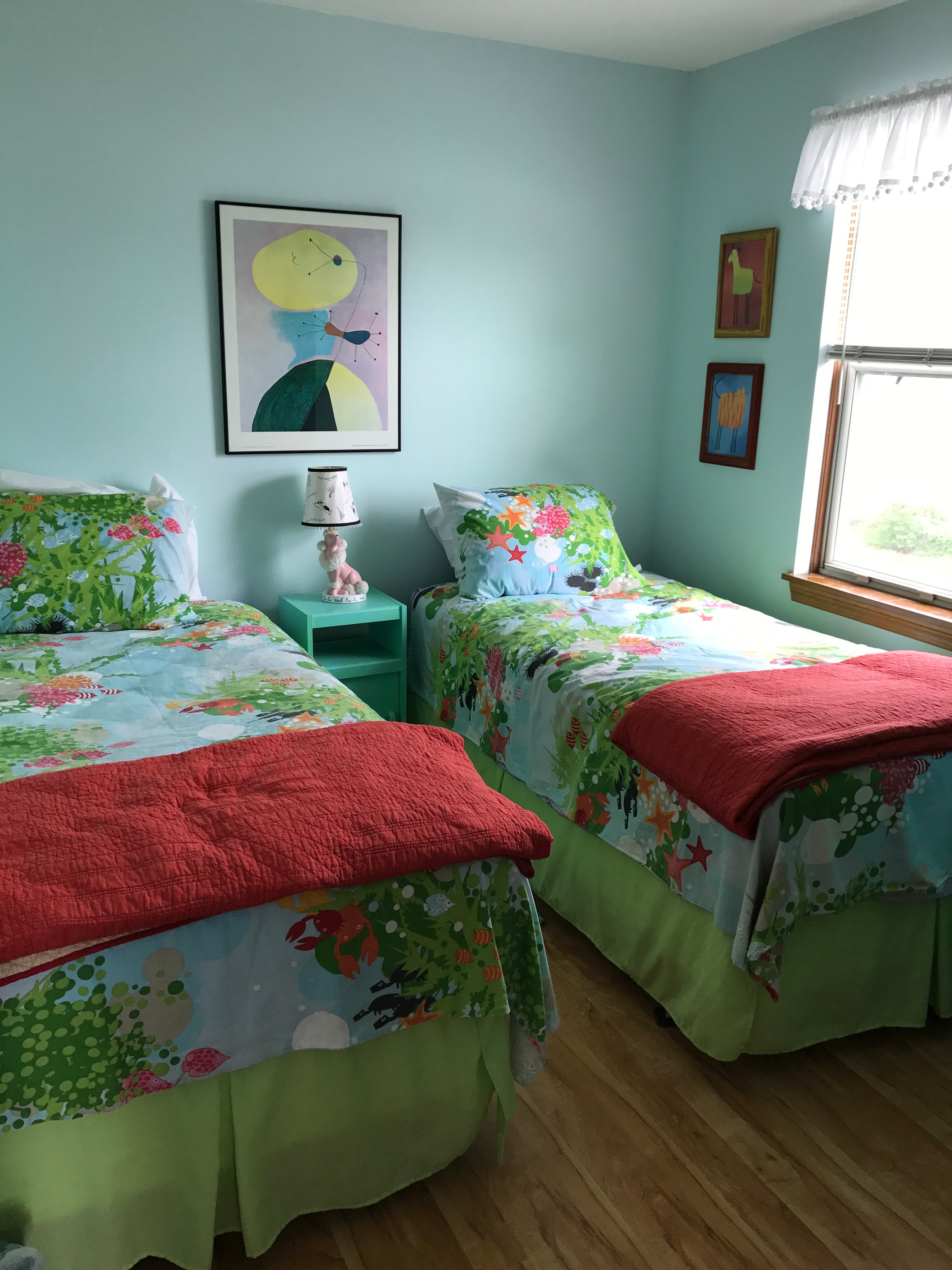 This was my room shown below in the back cottage, and it was special because I took the best nap of the year here – in fact, I think it was my only real nap this year! 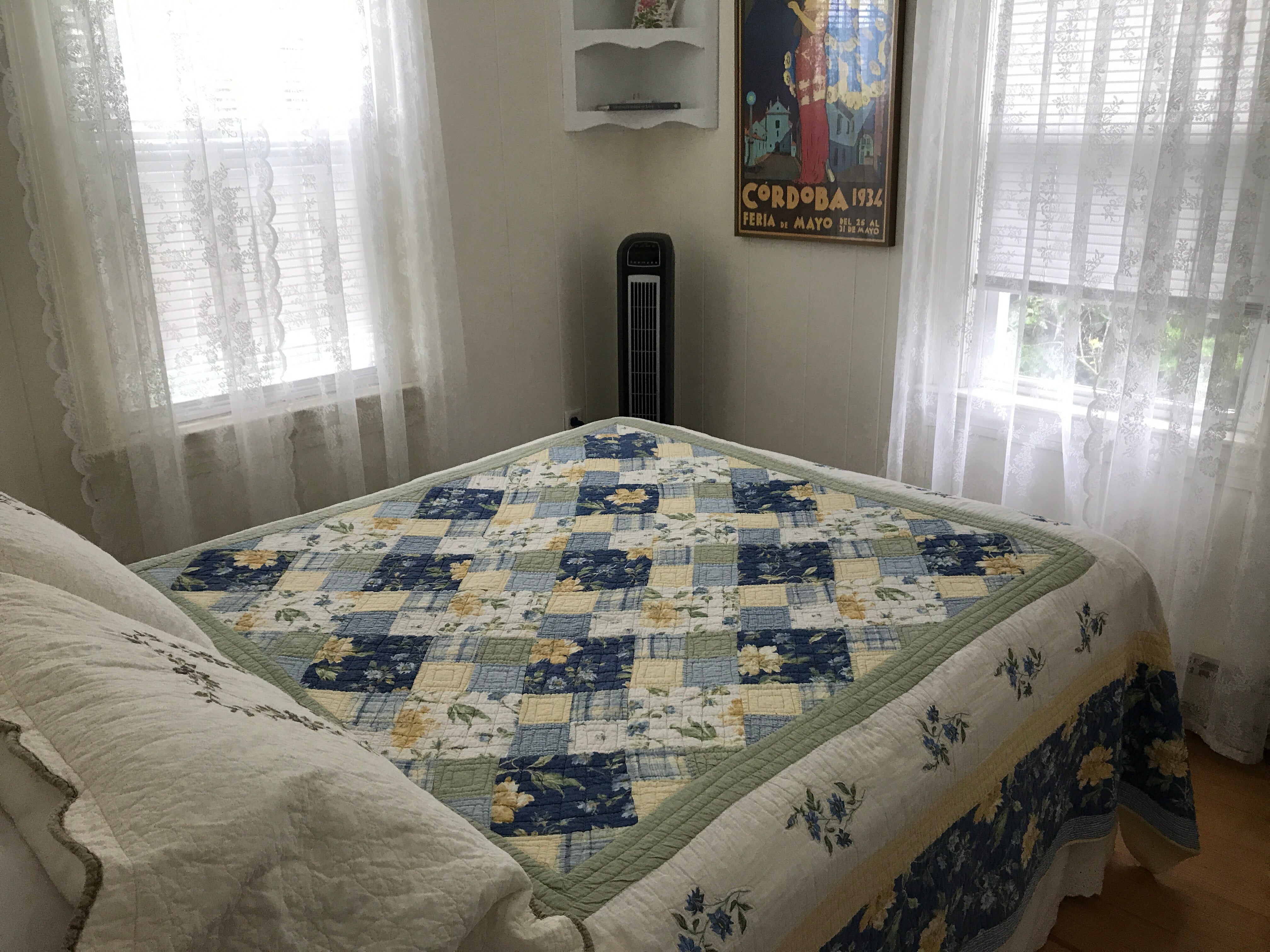 Being a Texas girl, I was nervous about the lack of air conditioning, but everyone swore it would be fine as that is the norm in Rhode Island. They were right as it was in the 70’s for most of the day and AC wasn’t necessary, though just a few days before our arrival it was in the 90’s and I don’t know if that would have been as fine. However, in the 60’s and 70’s with the windows open and the sound of the ocean waves in the distance it was delightful.

Our cottage had a little kitchen and a cozy nautical themed living room where Josh and I would hide out and work part of the day. 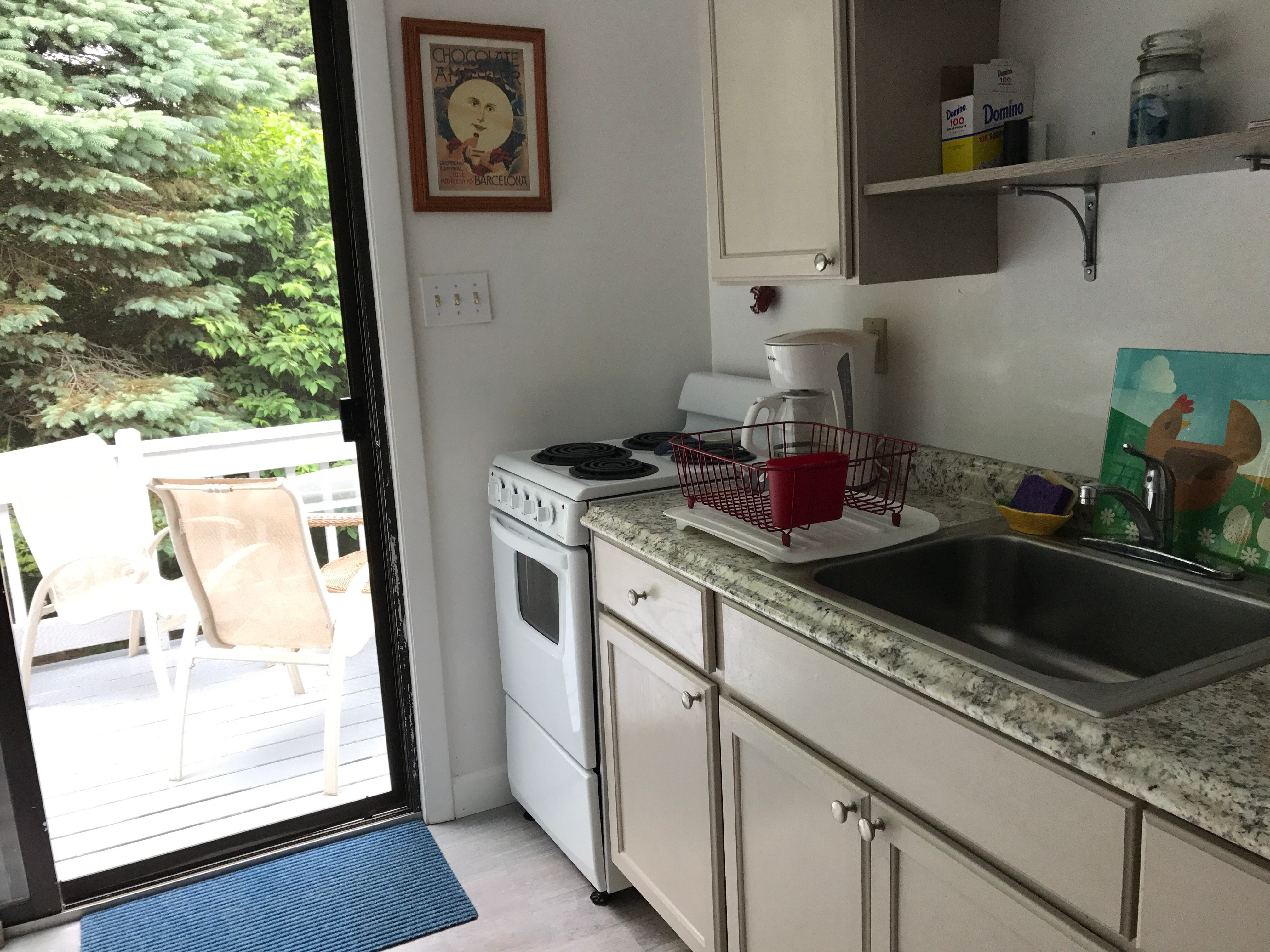 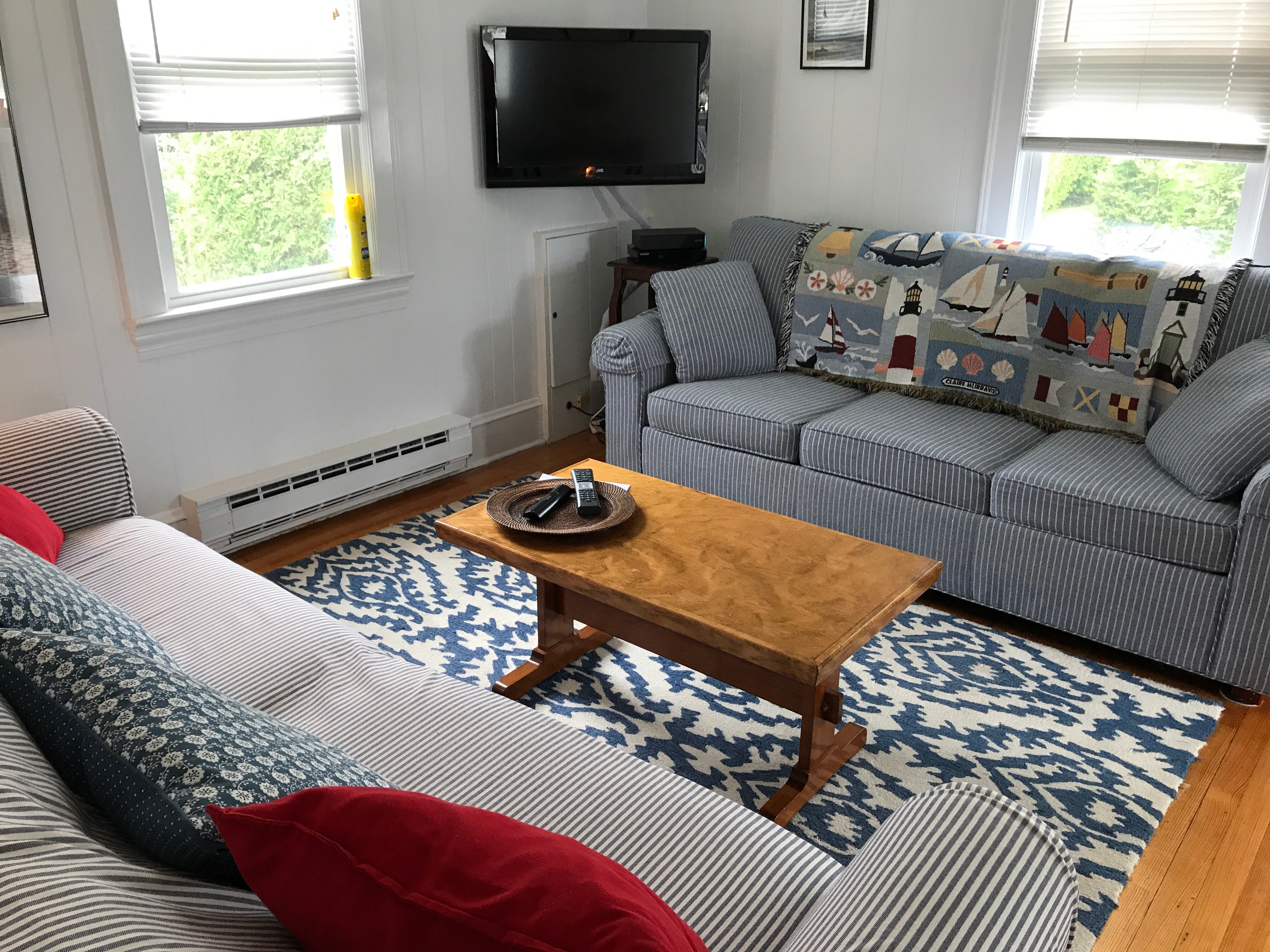 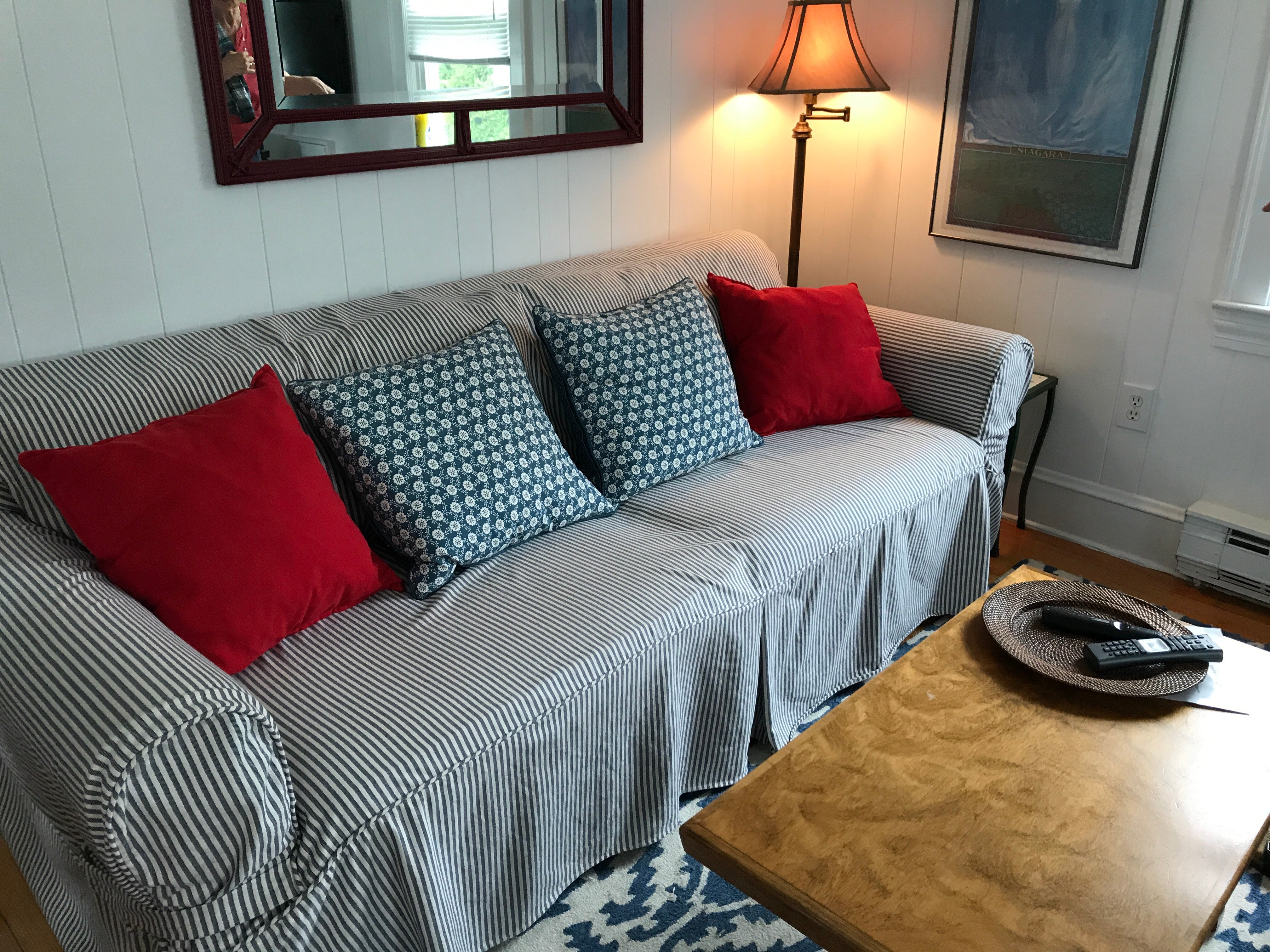 Our cottage also had a screened in porch that was perfect for morning coffee. 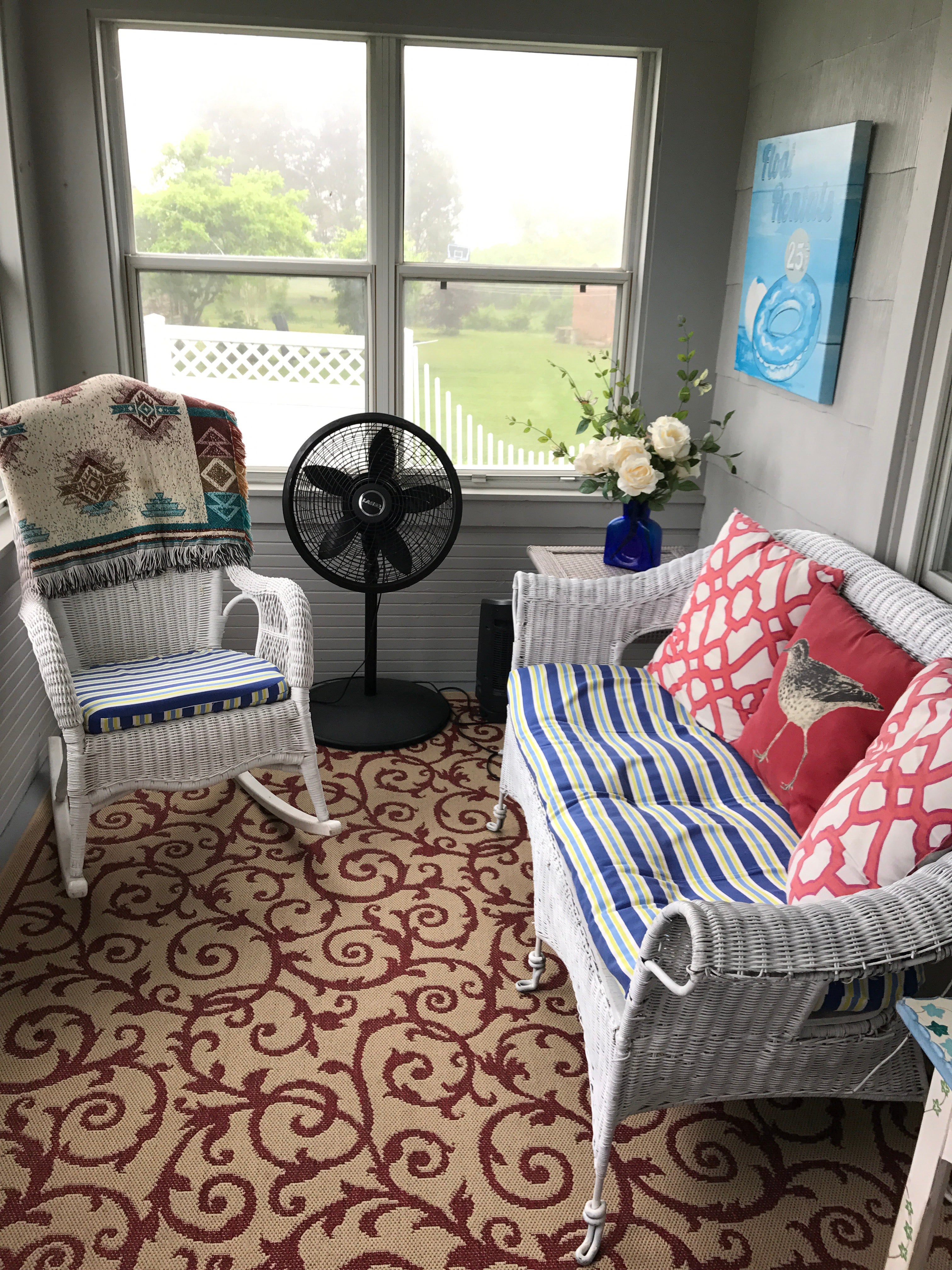 The front cottage had the larger kitchen and living room where most of the cooking and gathering would happen. 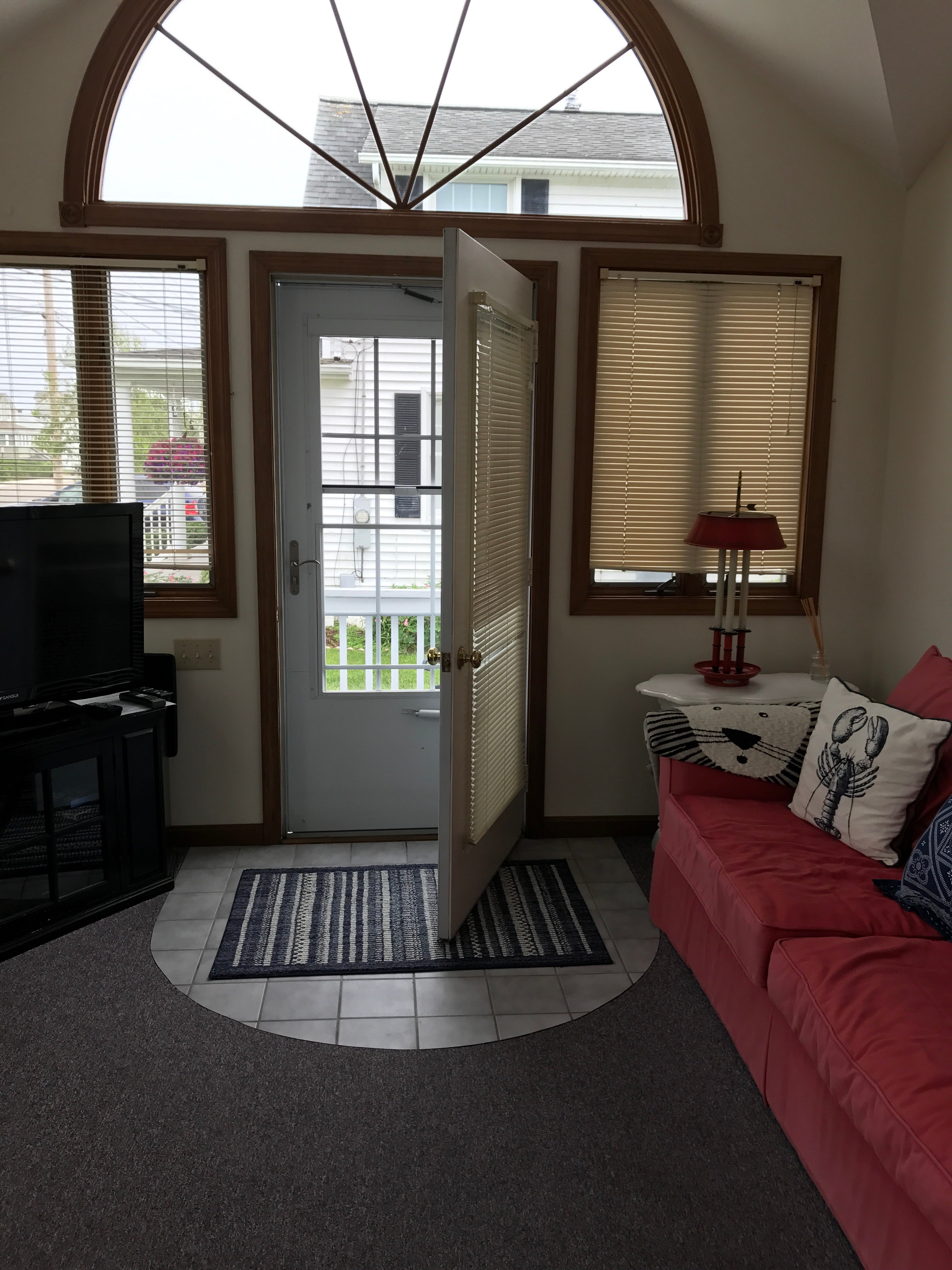 We cooked probably 2/3 of the meals that week in the cottages which kept things easy with all the kids, and of course saved money over eating out constantly with ten people. That said, I’m glad we didn’t cook every meal as it was fun to try out the local restaurants, and cooking and cleaning can get old on vacation. My favorite meals in the cottages were the ones cooked and enjoyed outdoors, as the weather was truly the highlight of the trip for me, outside of simply being with family, of course. We left 95 degree Texas heat to enjoy 65 degree ocean breezes, and that was worth the cost of admission all by itself. 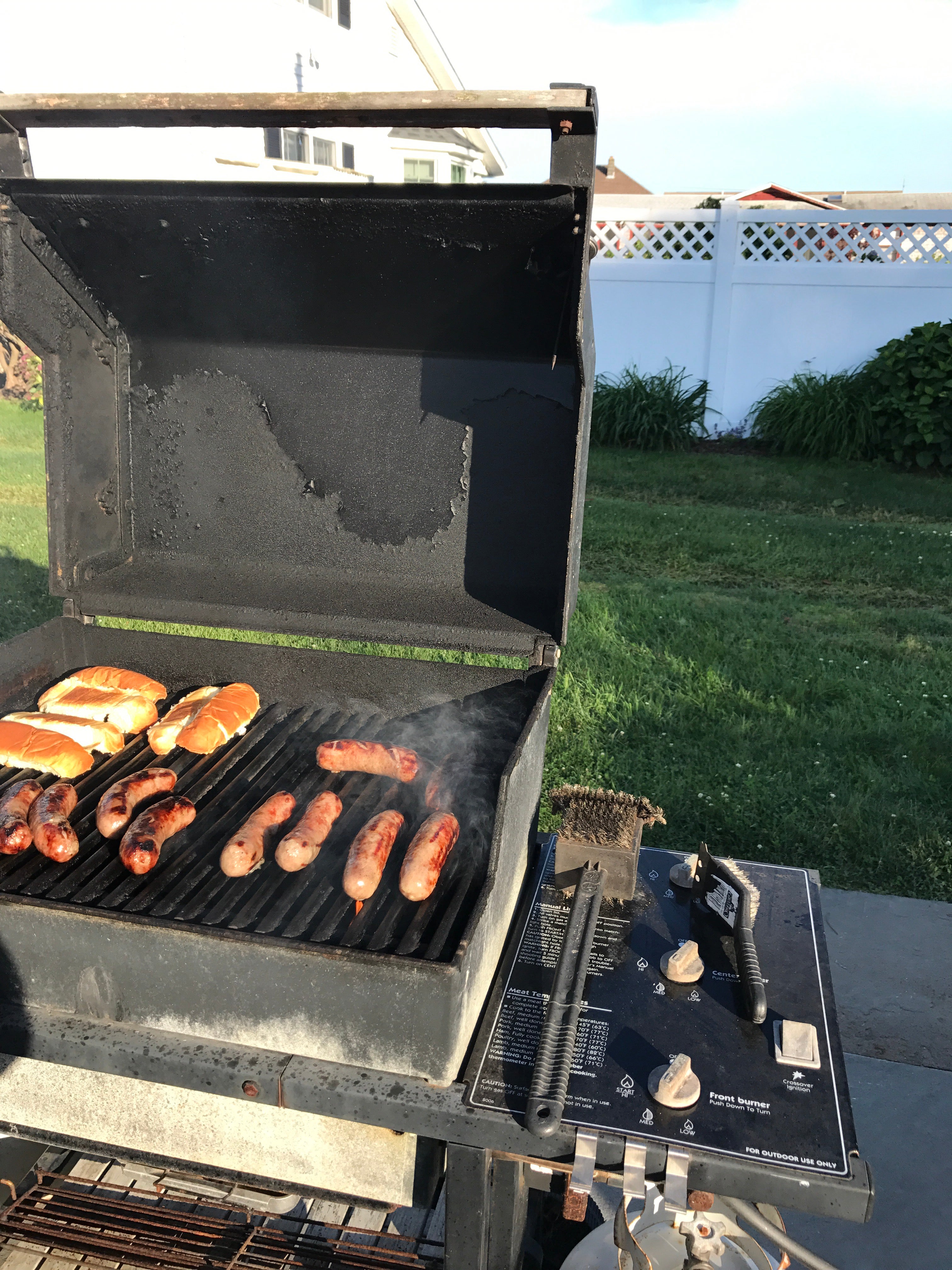 And what better post-dinner activity is there than throwing around a beach ball between the two cottages on the soft and lush green grass? 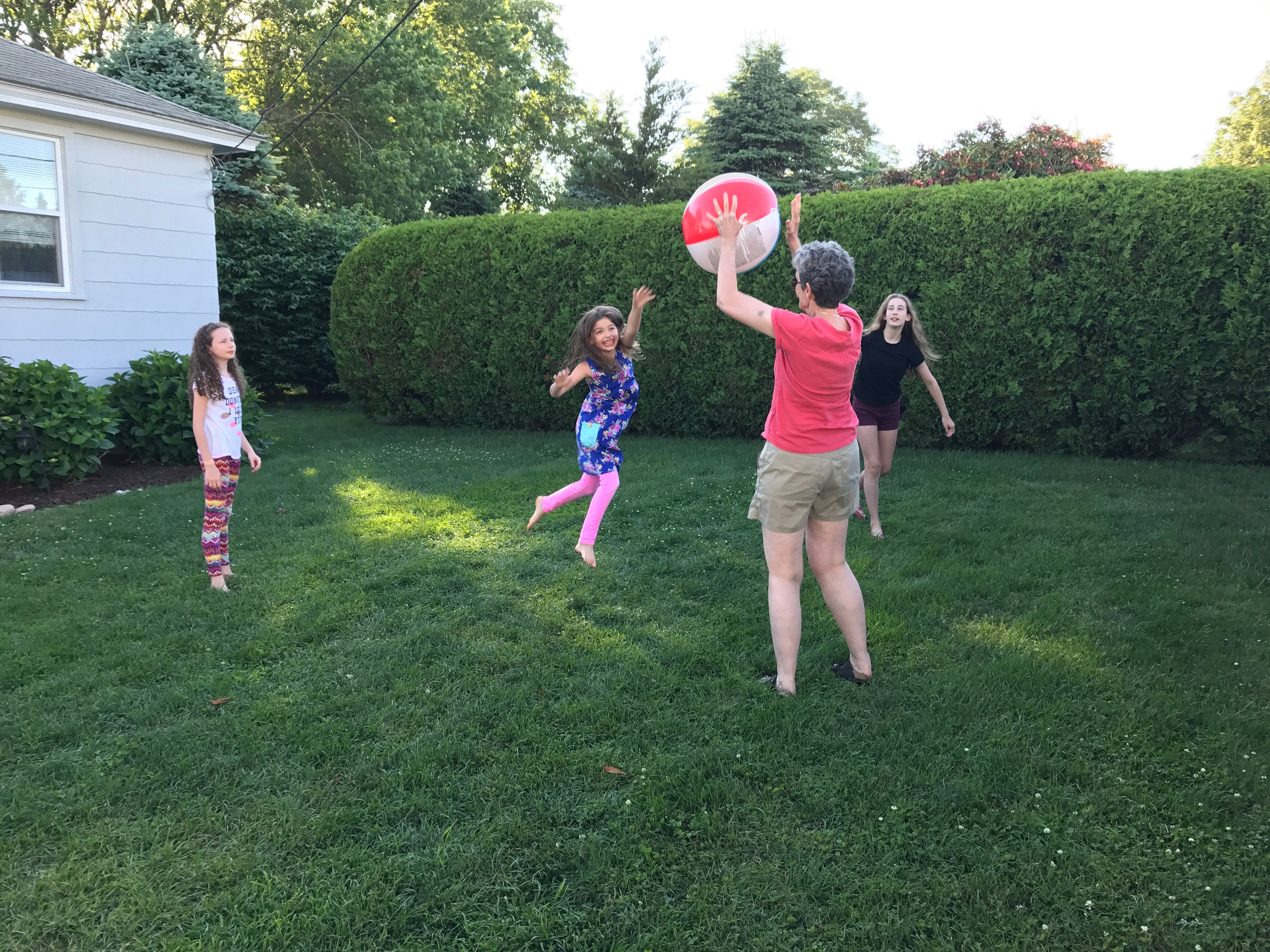 Each cottage had a washer and dryer, but honestly even just drying clothes on the line was a fun and quant activity that you miss out on when you stay at a hotel. In fact, when we got home from the trip we barely had any dirty clothes, which was a real treat for the one who usually has a mountain of laundry to tackle after travels. From a price perspective, this was unbeatable compared to what hotel nights would have cost for the three families in attendance. We would have absolutely paid more for three hotel rooms than we did for six bedrooms spread out across two cottages. If you are interested in doing something similar, I see the back cottage we stayed in available on Airbnb for $175 per night, though I think they are actively trying to sell the front cottage, so I’m not sure what the future holds if you wanted to rent both. The entire neighborhood we stayed in was full of adorable summer rentals, so there is no shortage of options. 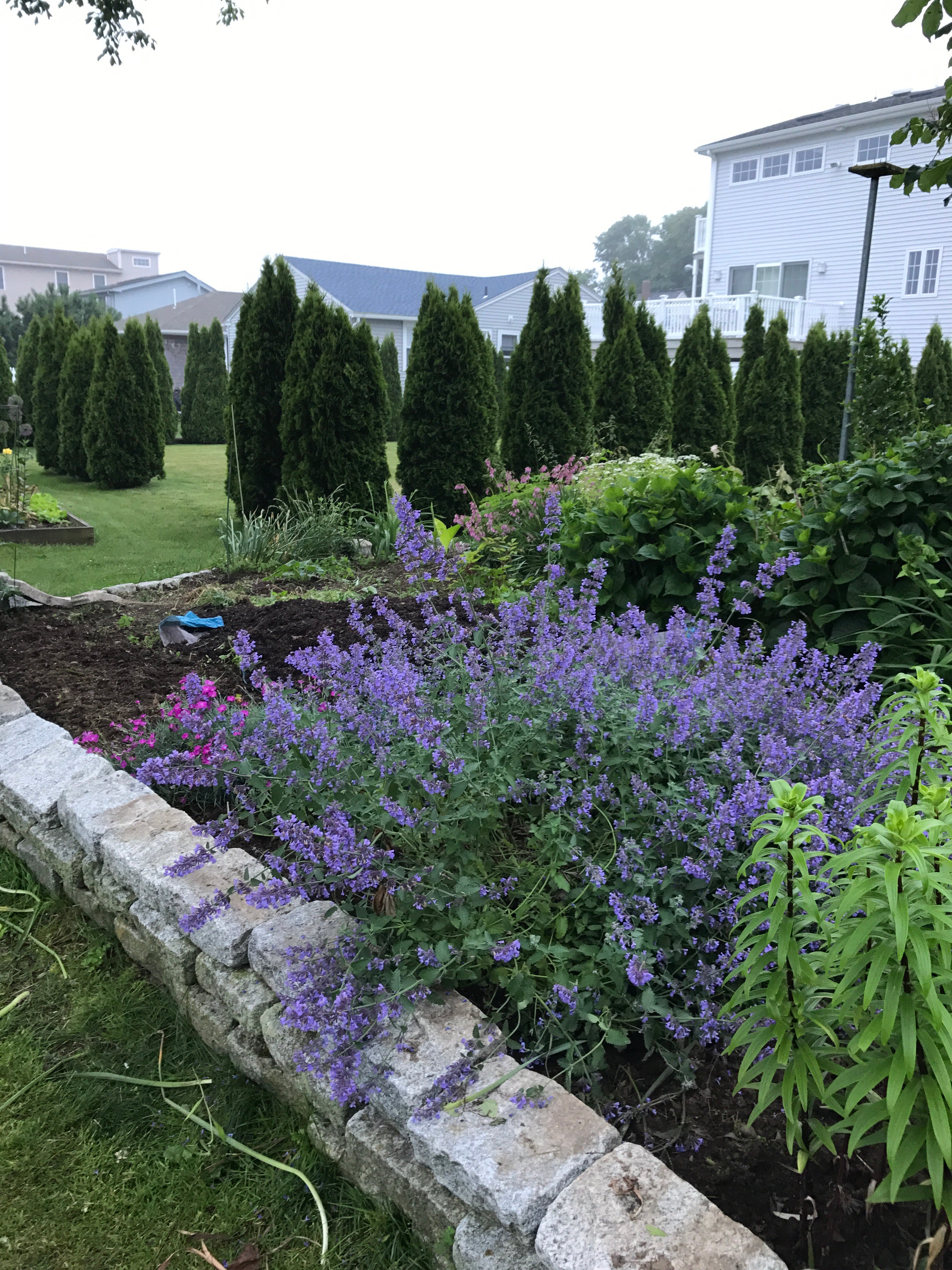 For me, keeping family connected is the #1 goal of miles, points, and travel. While we didn’t actually use many points on this trip, that’s okay because this was one of those times that a budget trip on cash made more sense for our situation. I didn’t expect to love being in these cottages as much as I did, but in the end I wouldn’t hesitate at all to return here in the future. 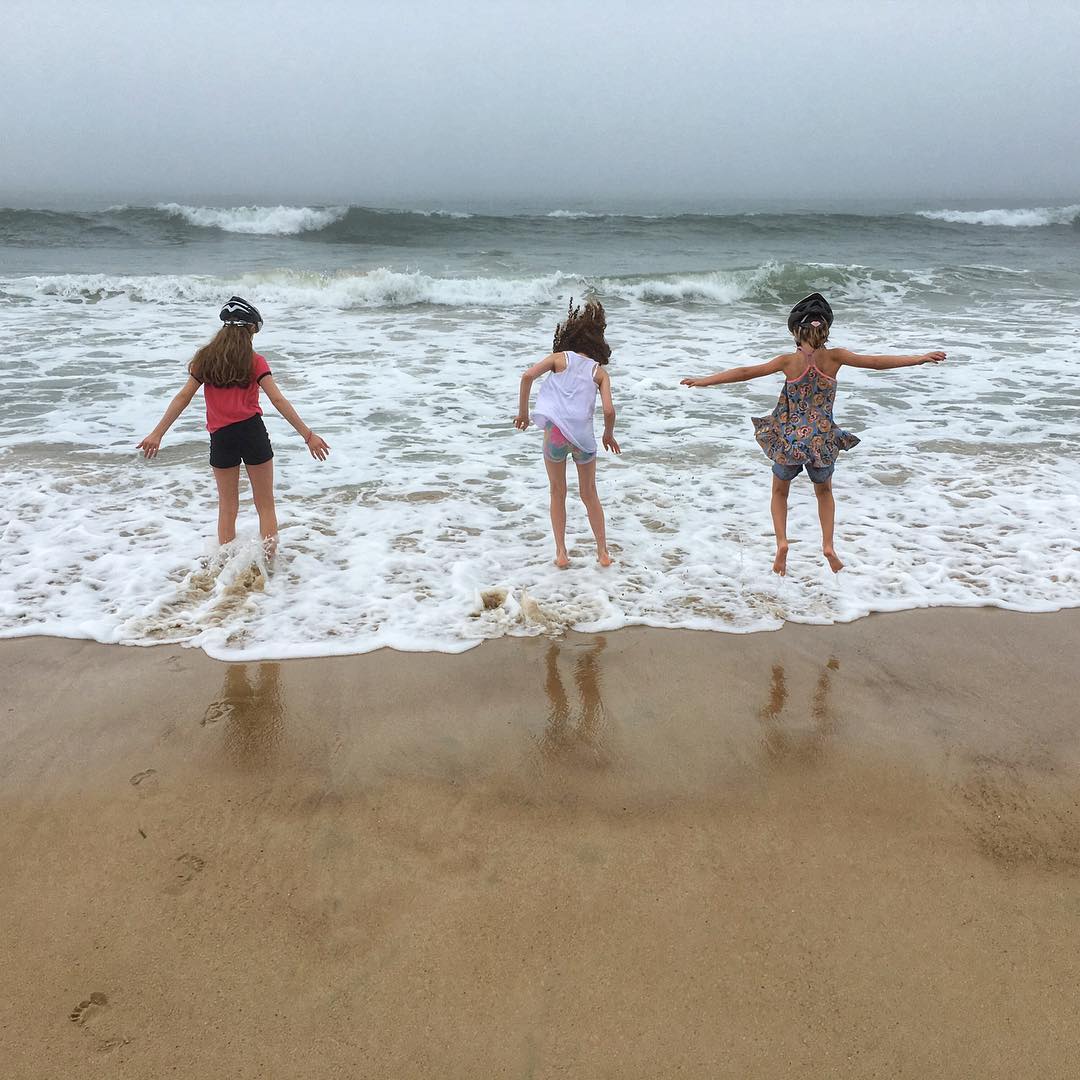 Westerly, Rhode Island was an easy drive from Boston, and at just $175 per night in the summer to rent a cottage with three bedrooms, it is a solid deal. Once here, you can ride bikes, or easily walk to restaurants, the beach, playgrounds, cook outdoors, and just enjoy the cool breezes.

Everyone in our crew made memories they will keep with them way longer than our beach suntans, and we found another spot on earth to enjoy. Soon I’ll share some of the fun places and activities we got to enjoy in and around Westerly, Rhode Island, and I hope some of you all are able to plan a budget friendly trip to Rhode Island for your own crews!

Summer Hull , aka Mommy Points, ran the Mommy Points site for families who want to travel more for less using miles and points for seven years. She now heads up a variety of special projects at TPG when she isn't exploring the world with her own two girls.
You might like
European hotel prices are rocketing — here’s where they’re rising the most
News
7m ago
Save 15% on Radisson Rewards award nights when you book by May 31
News
38m ago
Fire destroys funnel on Carnival cruise ship; no passengers or crew injured
News
52m ago
The Platinum Card® from American Express

CARD HIGHLIGHTS: Delta Sky Club and Centurion lounge access, up to $200 annual airline fee credit and up to $200 in Uber Cash annually (only for use in the U.S.)  (Enrollment required for select benefits)