A few months ago I shared that I thought American Airlines AAdvantage miles had overall become worse than Delta SkyMiles, which is to say they had fallen to the bottom spot of the major US based airline loyalty programs. My dissatisfaction with American AAdvantage was based largely on the reality that saver awards, even just for pretty ordinary domestic hops, were simply not available…or were very, very barely available, and then only on non-logical itineraries where it took three flights at odd hours just to fly a thousand or so miles.

This reality hasn’t changed too much since I wrote that post (heck, View From the Wing just highlighted the same phenomenon out of Austin), but yet in recent weeks I have successfully used my AAdvantage miles at the saver level multiple times. Not only have I used them, but I have used them on awards that I expected to be pretty difficult to nab. The secret? Well other than luck, my success has come from booking as soon as the schedule opens roughly eleven months in advance.

This is hardly a new “secret” in the miles and points world of course, but I’m having much better than average luck getting things well timed flights into Vail during a peak winter ski weekend, flights to Grand Cayman on a peak Spring Break travel date, and while I haven’t yet pulled the trigger on booking a trip to St. Kitts, there were plenty of well-timed flights to pick from on winter weekends. 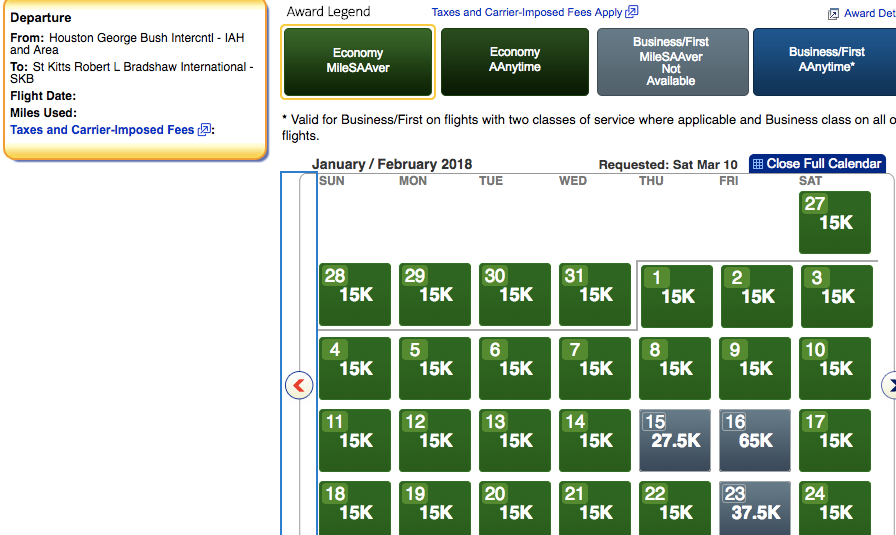 All of these were available from Houston with connections in American hub cities at the saver award level. This meant not only did the Houston – Dallas/Miami/Charlotte/Phoenix flight have to be available at the saver level, but also the one from the hub city to our final destination.

Sure, they were economy seats, but who cares for a few hours of flying?!

It is also worth highlighting that none of these are solo trips, and they were all for anywhere from two to four people. That small but important detail is actually huge because finding one award seat can be simple enough, but four can be a whole other situation. I was seriously floored when I found four saver award seats using AAdvantage miles to Grand Cayman for Spring Break to pair with our SPG award reservation at the Westin! I still need to find the return flights, but I’ve got a couple of ideas for that. 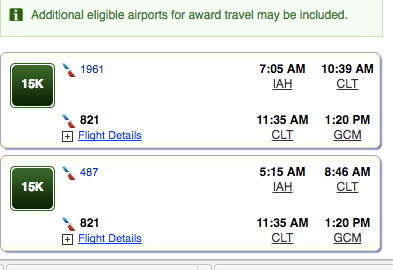 All of these redemptions are for flights that otherwise would be pretty expensive on dollars since they are to peak destinations at peak times, largely on school holidays.

I’ve now had a good enough run of success with AAdvantage that I wouldn’t mind racking up a few more American miles if the opportunity presented itself. I know they certainly aren’t going to get me everywhere we want to be at the saver level, but it I start looking far enough in with at least a little bit of flexibility they seem to be doing okay for us in recent weeks.

Have you adjusted your strategy with AAdvantage miles at all to eek out some saver award success stories?

Summer Hull , aka Mommy Points, ran the Mommy Points site for families who want to travel more for less using miles and points for seven years. She now heads up a variety of special projects at TPG when she isn't exploring the world with her own two girls.
You might like
Florida’s new high-speed train makes 1st test run to Orlando airport
News
1h ago
New offers: Earn up to 130,000 bonus points and $100+ in statement credits on these Hilton cards
News
1h ago
You don’t have to stay home: Summer travel deals you can still book
News
2h ago
Chase Sapphire Preferred® Card