The Impact of Visiting the Arizona Meteor Crater

Articles
Summer Hull , aka Mommy Points, ran the Mommy Points site for families who want to travel more for less using miles and points for seven years. She now heads up a variety of special projects at TPG when she isn't exploring the world with her own two girls.
Follow
March 05, 2017
•
8 min read 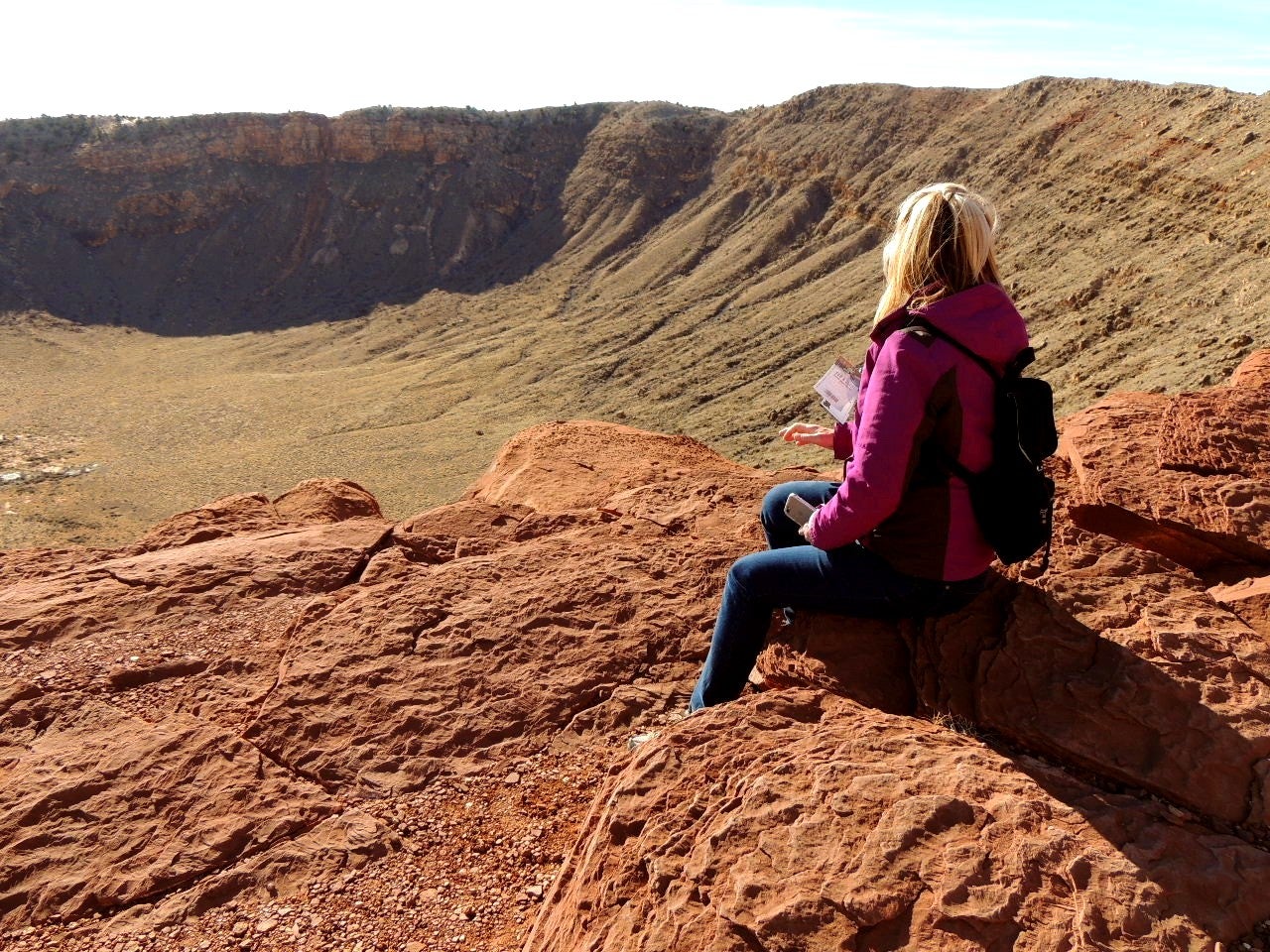 The Impact of Visiting the Arizona Meteor Crater
This post contains references to products from one or more of our advertisers. We may receive compensation when you click on links to those products. Terms apply to the offers listed on this page. For an explanation of our Advertising Policy, visit this page.

This is a guest post from my dad, Grandpa Points. He and my mom are in their 60’s, are (mostly) retired, and are ticking off “bucket list” destinations quicker than they ever thought possible thanks to miles, points, and travel deals. They have an intense love of this country, of its National Parks and treasures, and have no problem with a clean budget hotel room and an economy airline seat on a budget airline as long as it gets them where they want to be. A photographer by trade, his adventures are usually captured not just in his mind, but in his camera. He shares his thoughts and travels here from time to time, and I’m excited to share another one of their adventures.

We visited North/Central Arizona recently for a few days of diversity. We have found this part of the country to be quite fascinating, uniquely beautiful and ruggedly charming. It also offers great contrast in climate, geography, topography and pace. Flat desert environments can quickly give way to pinon pine forests and the mile deep Grand Canyon lies almost in the shadow of the 12,000 ft. San Francisco Peaks. Busy interstates with their fast food environment are criss-crossed by the slow paced nostalgia of Route 66.

We had spent several days enjoying these dichotomies when we put it all in our rear view mirror and headed east out of Flagstaff to visit an even greater collision of extremes, a site where outer space met Earth head on. We went to visit The Arizona Meteor Crater.

We were the only car on the road as we approached The Crater in the early morn'. We were trying to beat the arrival of the high winds that were forecast the day of our visit because we had heard the rim tours were subject to being cancelled if the wind reached certain levels. We knew we might never get another chance, so we were willing to get out early to insure we experienced all The Crater had to offer.

We had few expectations of the facility and the site we were about to explore. It was pretty remote and somewhat isolated and as far as we knew it might consist of a wooden shack, a single employee, a styrofoam cooler with $1.00 off-brand bottled water and a nearby port-a-potty. We might have found that sole worker taking our admission fee and pointing to an open door and saying, "it's out there, the hole is out there. Don't fall in and watch out for rattlesnakes." However, that scenario was soon proven to be totally inaccurate as the building we approached was definitely not a wooden shack.

The multi-level brick building appeared to be a part of the environment as we pulled into the parking lot.

The $18.00 entrance fee ($16.00 for seniors) is all inclusive, and entitles the visitor full access to the introductory video, the exhibits, guided tour along the rim of the crater, interactive displays and the aforementioned viewing stations, both inside and out. There is a surprisingly extensive gift shop that includes rocks, gems, books, shirts, parkas, caps, toys, educational material and Meteor Crater memorabilia and souvenirs. Clean restrooms and a Subway restaurant are also found in the facility. An astronaut wall of honor is in the open courtyard as a permanent legacy to the time the corp trained and learned at The Crater. Also in the courtyard is an open brick window framing the area's sentinel geographic marker, The San Francisco Peaks.

After entering the building, you either take the elevator or the stairs to the upper level where you are encouraged to initially view the short movie that gives you an historical look at the asteroid and its literal and figurative impact at this site.

The video is well produced and nicely edited and is shown in a theater that seats 75-100 people with modern theater-style seating. After the viewing, groups congregate around the largest surviving piece of the asteroid. The Holsinger Meteorite is a pitted, ridged, smooth and rough specimen that is about the size of an over-the-oven home microwave, only much heavier. It weighs over 1400 pounds!

To better describe this weight and density, let's imagine the meteorite was divided into segments the size of a loaf of bread. It is our rough estimate you could get about 19 such loaf sized parts from this specimen. With these computations, each loaf of bread sized piece would weigh roughly 75 pounds. Now, that is some seriously concentrated weight. Where is The Science Guy when you need him?

The guided rim tour also exits the building near the Holsinger fragment. Our tour guide was very personable, knowledgeable and patient. We asked a lot of questions and she answered them completely. The rim tour goes out about 1/2 mile before turning back.

It does not go all the way around the crater and there isn't really any need to. Visitors are also not allowed to descend into the crater. The tour stopped several times along the way to highlight and explain different aspects of the crater's past and present.

The force of the impact generated an explosion that was equivalent to 10-20 megatons of TNT. This explosive force is about the same as the most powerful nuclear weapon in the U.S. arsenal. The crater is about 2.5 miles in circumference with a current depth of about 550 feet and with a rim that today rises about 50 feet above the normal lay of the land. Through the years, erosive forces have reduced the rim height by about 50 feet and raised the crater's floor by about 100 feet.

As you gaze at parts of the crater's barren, rocky and reddish/brown landscape, it does not take too much imagination and mental wandering for your eyes to start searching for the Mars Rover, Curiosity.

For the longest time, it was assumed by most scientists and geologists that the crater was volcanic in origin and only within the last 50 to 100 years have those communities positively determined the crater was the result of an asteroid impact. An extensive mining operation once took place in the bottom of the crater in the pursuit and in the belief that the original asteroid was intact and buried there. This proved to be a futile search and the man in charge lost all his fortune before giving up and returning home. However, the story has a happier ending as his long term efforts resulted in a "squatters rights" kind of scenario and the property was deemed to be his. His family subsequently inherited it and continues to own and manage the land even now. The Meteor Crater is a privately owned venture, but it does have special government recognition that offers some federal protection.

After the tour, you are on your own to shop, eat, take in the exhibits or view the crater some more.

We did all of the above. We spent about 2.5 hours at The Crater and found it exciting, interesting and very educational. The Crater visit exceeded our expectations and we commend all those involved for making this such a positive experience. The operation we encountered was first rate, well run, nicely organized, properly staffed, clean, up to date, educational and adequately funded. The powers that be are obviously dedicated to providing the visitor with a comprehensive experience at The Crater that includes multiple viewing options to fit each person's individual need.

But, I can't help but wonder how this blog would have turned out if there had indeed been a wooden shack, a single employee, a styrofoam cooler with the $1.00 off brand bottled water and a port-a-potty nearby. What would we have written if that employee had actually taken our money, pointed to the open door and said "it's out there, the hole is out there. Don't fall in and watch out for rattlesnakes." I guess we will never know, but it would have been interesting. Very interesting.