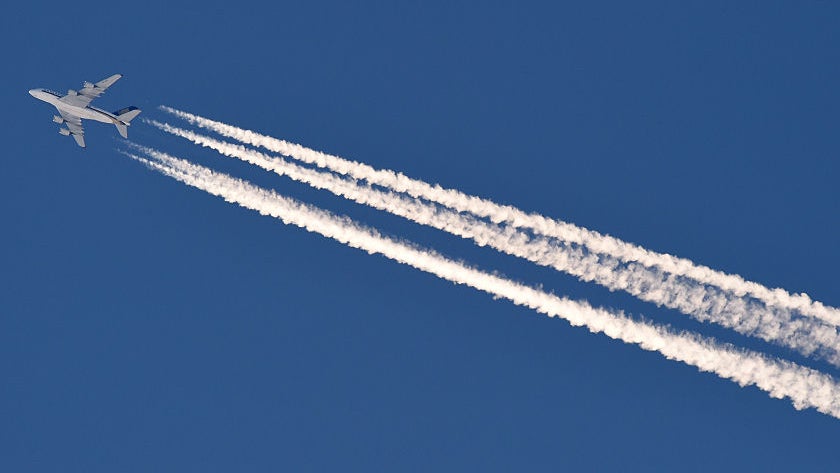 Airlines Could Help Reduce Climate Change With Flight Path Changes
This post contains references to products from one or more of our advertisers. We may receive compensation when you click on links to those products. Terms apply to the offers listed on this page. For an explanation of our Advertising Policy, visit this page.

Although jet engines have come a very long way in their development since the dawn of the Jet Age, one of their biggest drawbacks is their impact on the environment. The newest jets are up to 30% more efficient than the previous generation, but one new study suggests they can be even more efficient by changing the way they fly.

Scientists at the University of Reading in the UK evaluated the flight paths of approximately 400 flights that cross the North Atlantic every day, and found that small vertical or horizontal adjustments to their routes could reduce pollution by 10%. Their findings were published on Monday in Environmental Research Letters.

The suggested changes would be a marginal cost to the airlines, with a 1% increase in operating cost — “small change” for an airline. There are dozens of airlines who fly these routes, therefore each airline would only have a handful flights that are impacted.

Lead author Volker Grewe, from the DLR-Institute of Atmospheric Physics and Professor at the Delft University of Technology, said:

"Around 5% of man-made climate change is caused by global aviation, and this number is expected to rise. However, this impact could be reduced if flights were routed to avoid regions where emissions have the largest impact. Aviation is different from many other sectors, since its climate impact is largely caused by non-CO2 effects, such as contrails and ozone formation. These non-CO2 effects vary regionally, and, by taking advantage of that, a reduction of aviation's climate impact is feasible. Our study looked at how feasible of such a routing strategy is. We took into account a representative set of weather situations for winter and summer, as well as safety issues, and optimized all trans-Atlantic air traffic on those days."

There are a few things that may get on the way of success for this program. Professor Grewe said that current climate forecast models aren't robust enough to predict climate change through the course of a flight. There will also have be an agreement on the allowable amount of contrail formation, which will cool the climate more than the CO2 produced by the engines warms it.

The big trick to this is the accuracy and dependability of weather forecasting. We're just now reaching a point where pilots can receive weather updates from the ground — thanks to Wi-Fi — during a flight. Historically, they've had to rely on a pre-departure weather briefing, and a system known as ACARS — which delivers short 'text messages' to pilots during flight.

The impact on air traffic control will also have to be evaluated. Although the study found their suggested routings would cause no safety issues in the sky, it's a good bet that the number of planes on these routes will increase significantly, especially with airlines such as Norwegian furiously expanding their route maps.

After further research, the flight changes could be implemented within the next 10 years. It would also be fair to say that in a decade from now, many older planes that are causing the bulk of the pollution will be retired, helping the situation even more.