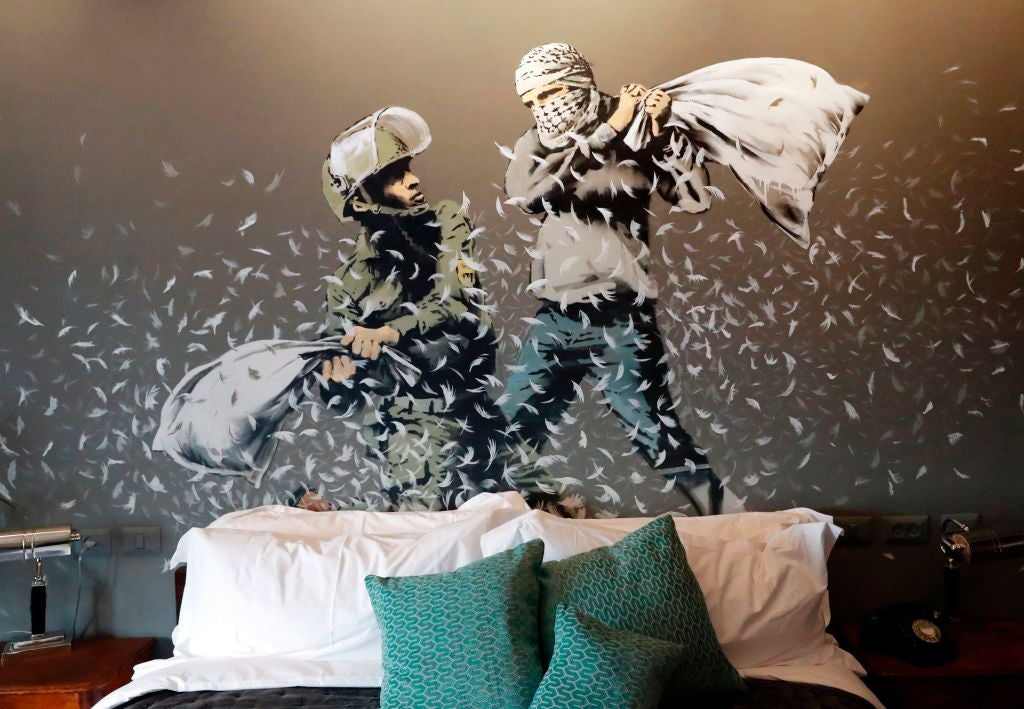 Banksy Just Opened a Hotel in Bethlehem with the "Worst View in the World"
This post contains references to products from one or more of our advertisers. We may receive compensation when you click on links to those products. Terms apply to the offers listed on this page. For an explanation of our Advertising Policy, visit this page.

Banksy — the famed graffiti artist and political activist known for painting murals around the world — has unveiled a new art installation and it's not just a scandalous image in London, New York or LA. This time, the artist, whose identity remains a mystery, has opened a hotel in the West Bank. Specifically, he's launched Walled Off Hotel in the town of Bethlehem in the middle of disputed territory.

The fully functioning property was primarily designed and financed by Banksy himself. The hotel name comes from its surroundings — it's adjacent to a 30-foot wall that separates Israel and Palestinian territory. Over the years, Banksy has decorated the wall with murals depicting protestors throwing a bouquet of flowers and a peace dove wearing a bullet proof vest with a target on its chest.

All nine rooms at The Walled Off Hotel have views of the massive concrete barrier, which inspired the media-friendly mock feature "Worst View In the World."

Seven of the rooms were decorated with unique artwork by Banksy, while two were reserved for other artists, including Dominique Pétrin and Sami Musa. Construction of the property took 14 months to complete and the entire project was shrouded in secrecy.

Accommodations range from basic to opulent. The 'Presidential' room provides you with "everything a corrupt head of state would need — a plunge bath able to accommodate up to four revelers, original artwork, library, home cinema, roof garden, tiki bar and a water feature made from a bullet riddled water tank."

If you're on a tight budget, you can stay in a dorm-style room for $30 per night that's outfitted with surplus items from Israeli military barracks.

The hotel gym was replaced with a museum exploring the history of the separation barrier and Israeli-Palestinian conflict. Guests can relax at the 1917-themed hotel piano bar and admire the variety of Banksy pieces including everything from a cherub on life support to statues choking on tear gas fumes. Soon, an independent art gallery will open with rotating works from notable Palestinian and Israeli artists.

According to CNN, The Walled Off Hotel is located in Area C, an area of the West Bank under Israeli control. It's open to both Israelis and Palestinians and hopes to be a "safe space for discussion." The hotel does not take any sides in the conflict but acknowledges that both have concerns.

The hotel's website says "Depending on who you talk to it's either a vital security measure or an instrument of apartheid. Its route is highly controversial and it has a dramatic impact on the daily lives of a lot of people. The one thing beyond dispute is that everything here is under dispute."

Elton John provided entertainment for the hotel's opening party via livestream from a different location, and the hotel's website says legendary DJ Fat Boy Slim will play a street party on March 13. Each night an automated piano plays an exclusive recital, currently featuring Massive Attack. Trent Reznor from Nine Inch Nails and Flea from the Red Hot Chili Peppers are said to be creating material for future hotel recitals.

The property will open for bookings on March 11 and is independently owned and operated by locals — so you won't be redeeming points here any time soon.