What United Flights Have the Real Polaris Business Class Seats

Articles
Summer Hull , aka Mommy Points, ran the Mommy Points site for families who want to travel more for less using miles and points for seven years. She now heads up a variety of special projects at TPG when she isn't exploring the world with her own two girls.
Follow
Feb. 15, 2017
•
7 min read 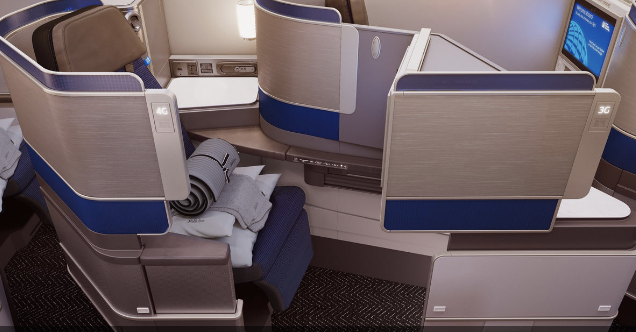 The first United 777-300ER enters scheduled service bright and early tomorrow morning at 7AM with a flight from Newark to San Francisco. This is not only the first aircraft of that type to be operated by United, but it is also the first one that will feature the new direct aisle access Polaris business class seats.

These may not be the best business class seats in the sky, but they are pretty darn nice. Add in the Saks Fifth Avenue bedding and pillows, upgraded meal and drink service, Cowshed amenities, and more and you have a business class product that I am very much looking forward to trying out for myself.

The New United 77W Planes Are Great...In the Front

However, if you can't get yourself into one of the 60 Polaris seats at the front of the 77W and instead find yourself with the majority of folks in the over 300 economy seats, then the plane offers much, much less to be excited about.

While there are power outlets and seat back entertainment screens at all of the seats, the economy section of this plane is the first United plane to seat 10 across in a 3-4-3 arrangement. That's a lot of people in a row. The seat width is pretty small at just 17.05 inches across with 31 inches of pitch. Economy Plus is a little better with the same unfortunate seat width, but an extra inch of recline and 3 extra inches of pitch. To give some comparison, the United 764 gives 18 - 18.5 inches in width in economy and even the Spirit Airlines A321 provides 17.75 inches of width, though the Spirit seats don't recline.

Flying all night in a row with 10 people and just over 17 inches of seat width does not sound exciting to me, but as long as you keep yourself at the Polaris end of this bird, you should be very well off. Along those lines, if you are anxious to try out the Polaris seat for yourself on a future United flight, I want to run down some of the ways to make that happen.

First, be very clear that just booking a seat marketed as United Polaris Business Class does not mean it is the new Polaris seat. In fact, for quite some time to come, most United flights with Polaris service will not be in the new Polaris business class seats. Instead, the Polaris service just means it will have things like the Saks Fifth Avenue bedding, new food/beverage options, and access to the Polaris Lounges as they become available. Currently, the only Polaris Lounge open is in Chicago.

Fly the 777-300ER to Get Polaris Business Class Seats

If you want the Polaris business class seat you need to pay attention to aircraft type, and for now the only type that has it are the handful of new Boeing 777-300ER, aka 77W, planes. Over time some other aircraft types will be retro-fitted with the new seats. You can check the aircraft type by clicking on "Details" as shown below.

The seat map itself will also clue you in you are looking at the Polaris seats as they are in blue as opposed to the "old" Business Class seats that will be shown in yellow.

Catch a Domestic Ride on the 77W This Spring

Beginning February 16th and running for a few months until May 4th, there will be at least one 77W operating between Newark and San Francisco six days a week, with a second 77W planes operating the route between February 22 and March 8th (except on Tuesdays and Sundays). I did multiple spot checks and haven't recently seen a business class saver award available on this route, so it will cost you the standard award rate of 50,000 miles unless you get lucky and find a business class saver award at 25,000 miles.

Paid one-way tickets can be as high as several thousand dollars, such as for tomorrow's inaugural, but I see prices as low as about $670 one-way on some dates in mid-March. The flight times you want to look for to fly in the 77W and the new Polaris seat are the 7AM EWR - SFO flight and the 12:50PM SFO - EWR flight. As you get more into spring, the times do shift a little bit. On the dates with two 77W's running you can also look for the 8:30AM SFO - EWR flight and the 6:10PM EWR - SFO flight. Again, to be extra safe, also check the "Details" and be sure you are booking on a 777-300ER if you want Polaris seats.

After that domestic introduction, the 77W will enter international service where it will get the full Polaris treatment complete with pajamas, bedding, and multi-course meals on March 25th when it will begin flying between San Francisco and Hong Kong. Some other routes from SFO thought to be likely to get the 77W in the near-ish future are Beijing, Seoul, Taipei, and Tokyo. Tel Aviv has also been mentioned as a possible destination both from San Francisco and Newark.

The routes from the US to Asia or Israel will cost you 70,000 United miles at the saver level in business class...if you can find that availability...which is far from a given.

By the end of the year, United should have 14 777-300ER planes with the new Polaris seats, and the number of aircraft in the fleet with the seats will only go up from there. However, in the coming months, you will have to either be lucky or purposefully seek out the true Polaris seats if you want the full Polaris experience.

This post was written in February 2017 when Polaris business class was first launched, but for those looking for more updated status now, there is some good news. As of February 2018, there are currently 14 777-300ER aircraft in service with the true Polaris seats with four more still to come. Four of the planned 14 767-300 ER aircraft have been retrofitted and none of the planned retrofits for 777-200ER have been completed.

Some routes where you are more likely to find the 777-300ER and the true Untied Polaris seats are:

The few 767-300ER retrofitted planes are harder to predict. They operate some flights to Europe from Houston, Chicago, and Newark as well as some flights to South America from Houston. You can track their progress here and as always pay attention to that seat map when you are looking for your flights!

Do you have a flight booked in the new United Polaris business class seats?

Head here to learn more about available rewards credit cards and their bonuses.

Related stories
Are dogs allowed on cruise ships? These are the cruises that allow pets
Monthly checklist: Credit card perks and benefits you should be using in December
Maximize your seasonal spending with these 5 credit cards
Always wanted to own a giant cruise ship? Here's your chance