Must See: An Underground Amusement Park in a Former Transylvanian Salt Mine 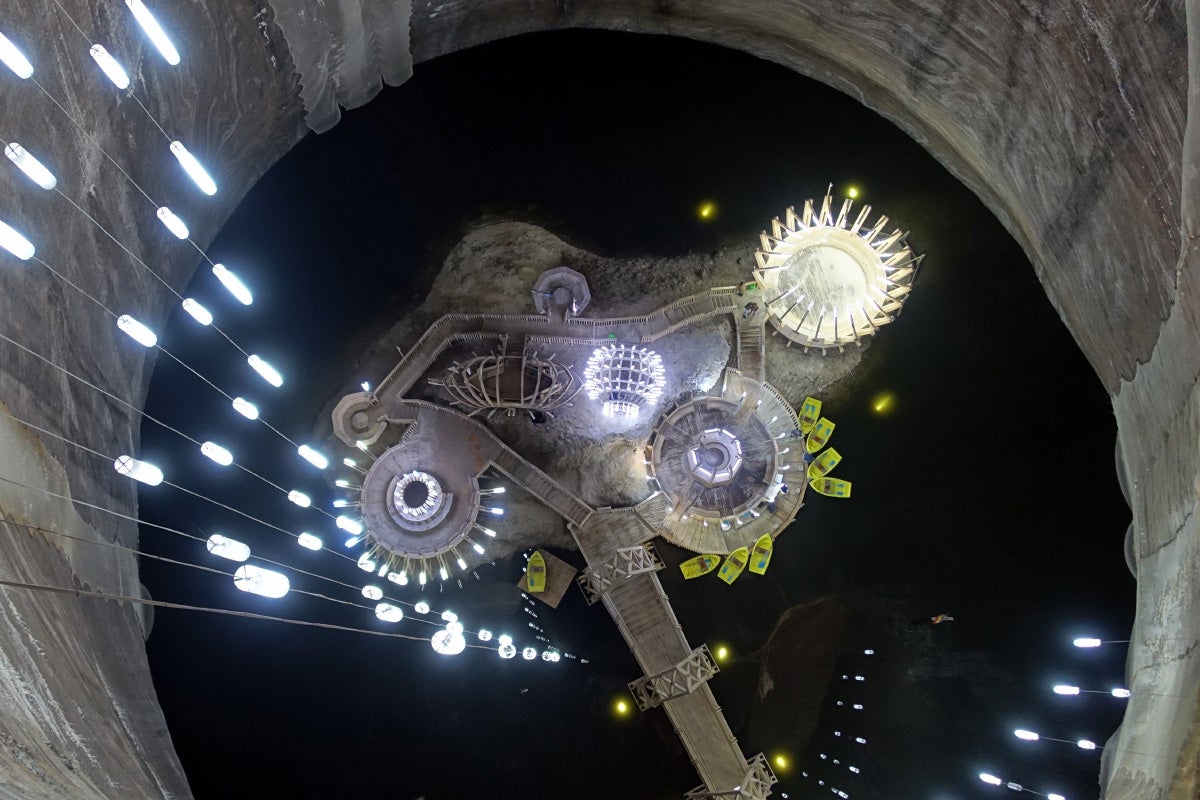 You probably know Transylvania for one thing: Dracula. But it's always meant (a bit) more to me. My grandmother's family hails from the region, so when a $414 upgradeable fare from Newark to Cluj-Napoca (via Munich) popped up a few months back, I booked a weekend trip to Transylvania's (unofficial) capital city. And wow — what a special place!

Getting to Cluj-Napoca (CLJ)

Back in December, United was offering upgradeable economy fares to a limited number of smaller markets in Europe for roughly $400 round-trip. These "V-class" fares would normally run $1,000 and up, and given that there was instant upgrade availability to United Polaris on the long transatlantic legs, I didn't hesitate to book this trip and redeem my Premier 1K Global Premier Upgrades to ride up front.

The Polaris flights were uneventful, operated by an older 767-300 aircraft. I managed to sleep most of the way over to Munich and a few hours on the flight home. I was especially impressed with my intra-Europe economy flights operated by Lufthansa subsidiary Air Dolomiti, though. The flight attendants were very friendly, and even though the flights were just over an hour long, I was offered a boxed lunch/breakfast and Prosecco. I found the Embraer E-195 to be very comfortable as well.

Cluj Airport is definitely on the smaller side, and regular international flights that you can book with miles are only operated by LOT, Lufthansa (Air Dolomiti) and Turkish — so it's Star Alliance or bust. If you're flying United across the pond, you can redeem 57,500 miles each way to travel in business class — otherwise it's 70,000 miles for business or 30,000 miles for coach, regardless of the UA partner you choose to fly.

I had a great time in Cluj, where I toured the city, ate some incredibly filling Romanian food and even spent a few hours exploring the haunted Hoia Baciu forest with a guide. But the highlight for me was the trip to Salina Turda, a salt-mine-turned-underground-amusement-park some 20 miles south of Cluj, which my airport Uber driver Sorin told me all about during our drive from CLJ to my hotel (Hampton by Hilton — 10,000 points per night) on Friday morning.

So, I called Sorin up and asked him to join me there on Sunday. It took about 40 minutes to drive from my hotel in Cluj to the entrance of the mine, but I asked Sorin to keep the app running all morning, so he would get paid for our time inside. That brought the cost from 90 lei ($21) to 129.01 ($30), a very reasonable sum for the drive and more than three hours of Sorin's time. Uber takes a 25% cut in Romania, so I gave him cash (the full 90 lei) for the trip home, bringing transportation costs to just over $50.

After the trip, I asked Sorin if I could pass along his info to anyone interested in booking a similar trip and he was thrilled at the opportunity. So if you're headed to Romania and you want to check out Salina Turda (or anything else in the Cluj area), feel free to email Sorin at sorinescu_85@yahoo.com.

Salina Turda first opened to tourists in 1992, but its history dates back at least to the 13th century, with one document referencing the mine on May 1, 1271. Electricity wasn't added until the early 20th century, so workers had to excavate table salt using other light sources for hundreds of years. Those miners came to mind throughout my visit — I kept wondering what they'd think of the Salina of today.

Admission for two to an amusement park 400 feet below the surface, a day of parking and a 20-minute boat rental — sounds like a pretty expensive outing, huh? But this is Romania... all in, I spent $18.75. Adult admission will run you $7, but kids are just $3.50, making this a very affordable family day trip.

There are two routes into the mine — one entrance (below) requires climbing down many flights of stairs, so be sure to keep that in mind.

While there are two elevators available, it's impossible to get to the main area without walking down at least a few flights of sodium-encrusted stairs — if you're like me, you'll probably be taking pictures the whole way down.

After a steep descent, you'll come upon the main room, which houses a variety of amenities. At more than 250 feet long and 160 feet wide, it's really a sight to behold.

Then, there's a balcony at the far end of the main room that overlooks an underground lake, another 13 stories below.

The lake has boats available for rent ($3.50 for 20 minutes) — each boat holds three people, and, as you'd expect, you'll be floating on salt water.

The boating excursion was the highlight for me, so it's worth the wait (if there is one at all). We visited on a Sunday and arrived just after the mine opened at 9:00am — by 11 it was starting to fill up, so be sure to arrive early if you can.

Here's what you'll see looking up from the lake — the first balcony is 13 stories up, while the second (the small orange sliver) is another 13 floors above.

While You're in the Neighborhood...

2.5 hours and some 500 pictures later, it was time to resurface and stuff our faces with a local delicacy Sorin had described as "meat from the side of the pig." I was a bit delirious on my 10-minute ride from the airport to the hotel Friday morning, so I was expecting some Romanian speciality, perhaps involving a stew with potatoes. Imagine my (pleasant) surprise when the waitress brought out two gigantic plates of ribs slathered with BBQ sauce, with a side of French fries accompanied ketchup and an incredible creamy garlic sauce.

These were the best ribs I'd ever had — and at $7 for a massive rack, they were also the cheapest. I also added one mititei, a typical local dish of grilled pork, beef and lamb (about 50 cents). After tip (it's customary to tip 5-10% in Romania), our bill at my new favorite restaurant (Pensiunea Pusca si Cureaua Lata) came to about $19, including a local beer for me and a Coke for Sorin.

At $50 for transportation and my guide, roughly $19 for parking, admission and the boat ride, and a $19 lunch for two, my private excursion from Cluj-Napoca to Turda cost just $89. Unbelievable! Hotels in Cluj are incredibly reasonable as well (my Hampton by Hilton stay cost just 10,000 Honors points per night, which we value at $50), but there's no question that flying to Romania is a bit of a hassle — and it can be costly as well, given that the cheapest fares I'm seeing now are in the $650 range. Flights similar to those I took (operated by United and Lufthansa/Air Dolomiti) start at $762 round-trip, with fares on most dates pricing much higher than that.

Still, if you're up for a unique adventure or you can work Cluj into a larger trip to Romania or Europe, it's absolutely worth adding to your list. Salina Turda will eventually be undergoing an expansion, so I'm already thinking about one day going back.