Articles
Summer Hull , aka Mommy Points, ran the Mommy Points site for families who want to travel more for less using miles and points for seven years. She now heads up a variety of special projects at TPG when she isn't exploring the world with her own two girls.
Follow
Feb. 04, 2017
•
3 min read 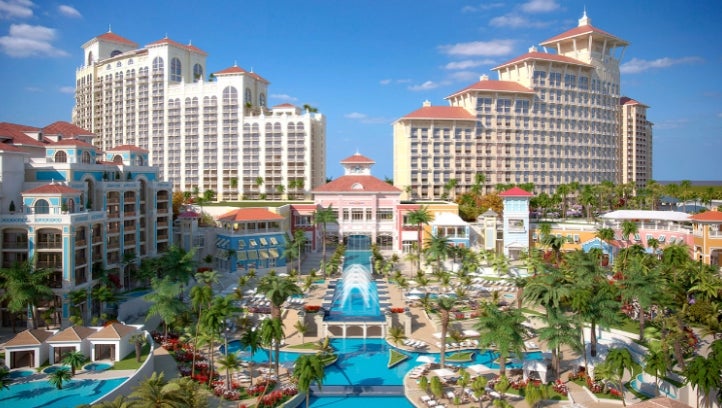 Grand Hyatt Baha Mar in Bahamas May Finally Actually Open?
This post contains references to products from one or more of our advertisers. We may receive compensation when you click on links to those products. Terms apply to the offers listed on this page. For an explanation of our Advertising Policy, visit this page.

A few years ago lots of us were pretty excited that Hyatt was going to have a large resort hotel in the Bahamas as part of the massive Baha Mar resort complex. For a while you could even book rooms for just 15,000 Hyatt Gold Passport points per night! However, lots of problems with the larger complex occurred before the doors ever opened including bankruptcy and more. The opening date was pushed back, and then stalled progress altogether in about 2015. Since then there haven't really been many (good) updates coming out about the future of the Grand Hyatt Baha Mar until pretty recently.

There are now numerous reports that the Baha Mar Resort will begin to open in late April 2017. They aren't accepting reservations yet (which is probably a good thing), but they seem to be moving towards opening at least a few hundred of the few thousand rooms the complex will support beginning this spring. The first phase of opening is said to feature not only some of the rooms in the complex, but also the casino, convention center, and golf course.

The Grand Hyatt Baha Mar even has a new General Manager in place, Scott Allen, who has been the GM at other Hyatts including the Andaz Maui. He told Travel Weekly that they expect to start doing some "marketing and promotion sometime in March and will be taking reservations about 30 days before the first rooms open in April."

In the previous pre-opening phases the hotel was priced at both the 15,000 and 20,000 point per night level, so my best guess is it will again ring it at one of those levels when it does eventually open...and my money would sadly be on the higher of the two levels.

I liked our last visit to the Bahamas, and very much hope to visit the Grand Hyatt Baha Mar hotel with my family, but just remember to keep your expectations in line if you do decide to target one of the early opening dates since this will be a staggered opening with the full complex not slated to be up and going for a while to come. Ill keep you posted when there are updates regarding reservations and a "firm" opening date.

Is the Grand Hyatt Baha Mar still on your family's radar?