Yesterday United and American started selling Basic Economy fares on select routes, and generally speaking, this is really bad news. Contrary to how it is occasionally spun, Basic Economy fares do not mean that if you are willing to skip things like advanced seat assignments, earning miles as normal, and having a full size carry-on that you can save money. No, it means if you need or want those very normal things that have forever been included on these airlines, it now costs extra. The fares didn’t get cheaper without those things, the fares got more expensive with those inclusions.

While I don’t like these fares, I do agree that (almost) everything is fair in the game of capitalism. American and United are doing a good job on their own websites describing what these fares do and do not include. I mean, virtually scaring you off from buying these fares and paying more for a regular economy fare is actually in their best interest. Also as I pointed out yesterday, using American or United miles to book award tickets exempts you from the Basic Economy rules, so (at least for now), that is a good thing.

However, the big losers here are those who have gotten used to using fixed value points like those from Chase Ultimate Rewards, Citi ThankYou, Amex Membership Rewards, and similar to book flights via those third party sites. The return has gotten as good as 1.5 – 2 cents per point in many cases, which is great for something like a domestic economy flight.  While that is a decent return per point, these sites already had their limitations when searching and booking flights, but now the situation is much worse.

On routes where United’s and American’s Basic Economy fares have launched, it is currently pretty much impossible to book an economy fare on these third party sites and not have it be the very restrictive Basic Economy fare that many of us probably want to avoid. It is possible you may be able to request a different fare class if you call to book over the phone, but even that process is not going to be simple, and I know beyond a shadow of a doubt that most people who want to use points in this manner do not want to be calling and messing with fare classes just to have a full size carry-on and an assigned seat. Travel Codex actually tried this yesterday and confirmed the hunch that it will not be a simple process, if it is possible at all.

But wait, it gets worse. With the exception of the Ultimate Rewards site, the others I tested like Citi and Amex don’t yet even warn you that you are booking a Basic Economy fare. It’s easy to blame the traveler for not knowing the Basic Economy restrictions, but they simply aren’t being spelled out with some of these sites at all. Unless you live and breathe this sort of stuff there would literally be no way to know that is what you are booking in many cases. 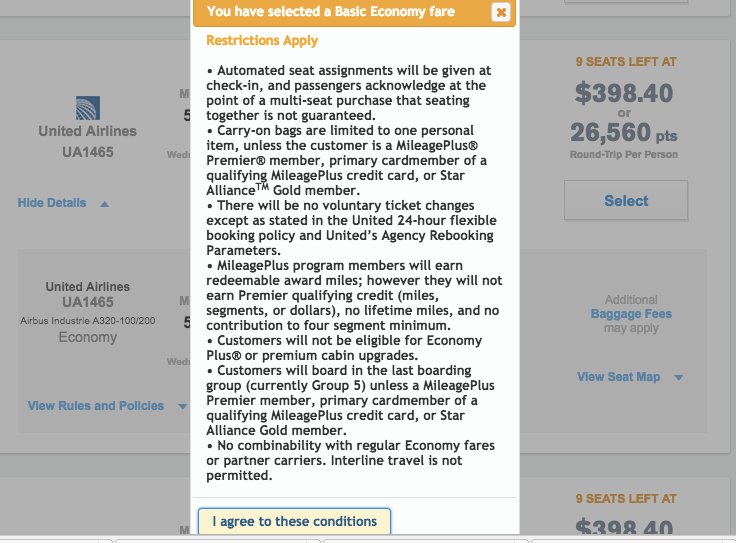 Here is an example of the baggage fees displayed when looking at a fare via Amex Travel on a route that I know is a United Basic Economy route and fare from Minneapolis to Houston. It says no fees for carry-ons, only that isn’t really true if bring something larger than a personal item.

I am also very concerned for those who book travel for work or otherwise have flights booked for them via these or similar third party sites as you now will have a whole new set of issues to contend with if you want something indulgent like an assigned seat and the right to earn miles. I know my husband already has a world of fun booking business travel through the Concur website, and I’m sure these Basic Economy fares won’t make the situation better.

The United and American Basic Economy fares haven’t expanded to all flights yet, so truly my best advice is to book flights on routes that don’t have those fares using these bank points while you still easily can. Hopefully when the Basic Economy fares become more common the third party sites will do a better job not only displaying the restrictions, but allowing you to select a “normal” economy fare online without those restrictions.

Summer Hull aka Mommy Points, ran the Mommy Points site for families who want to travel more for less using miles and points for seven years and now heads up TPG Family when she isn't exploring the world with her own two girls.
You might like
Deal alert: Half-price round-trip flights to San José and Liberia, Costa Rica
Deals
3h ago
One of my favorite promos is back: Earn a $50 gas card for every two hotel stays
News
4h ago
5G fallout: Emirates, JAL, ANA among those canceling US 777 flights
News
5h ago
Delta SkyMiles® Platinum American Express Card