To Maui or Not to Maui?

Articles
Summer Hull , aka Mommy Points, ran the Mommy Points site for families who want to travel more for less using miles and points for seven years. She now heads up a variety of special projects at TPG when she isn't exploring the world with her own two girls.
Follow
Jan. 02, 2017
•
7 min read 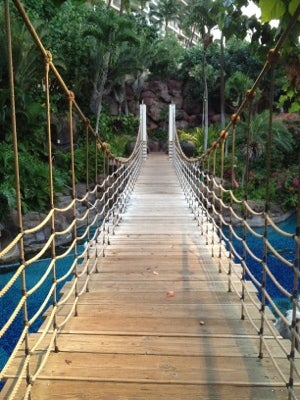 To Maui or Not to Maui?
This post contains references to products from one or more of our advertisers. We may receive compensation when you click on links to those products. Terms apply to the offers listed on this page. For an explanation of our Advertising Policy, visit this page.

In spring of 2016 I booked our 2017 family spring break trip to Hawaii using airline miles, hotel points, suite upgrades, and more. I was pretty excited with how it all worked out and that we were able to get the availability to line up. I figured (hoped) that by the time of the trip we would be at a point where that big of a journey wouldn't be too terrible of an idea. Our oldest daughter would be nearing the end of first grade and our second daughter would be about 20 months old. By that 20 month mark with our first daughter she was pretty conversational, sleeping just fine through the night most of the time, and travel was starting to get much easier than it was in the 9-18 month "hardest age to travel" range.

Fast forward many, many months from the time of booking to now and we are just under two months out from our spring break trip to Maui I'm having serious second thoughts. Things aren't terrible here, but sleep still is not a given, we are still tired more than not, and while the little one is picking up new words on a regular basis, she isn't conversational enough for me to trust that she can understand what is happening next on a long travel day and communicate all of her needs with words.

I knew Maui wasn't a super easy destination to reach, so I put a bunch of thought into the best way to get to Hawaii and back with a young kid, and ended up using 40,000 American miles each to fly Alaska first class to Maui, and a few more miles than that to American first class Maui - Dallas - Houston on the overnight return.

The outbound was always going to be rough as it is Houston - Dallas - West Coast - Maui, but with spring break travel dates that is as good as I could come up with. However, a schedule change happened on our outbound American awards that made a long travel day even longer and nastier with one super long connection and one super tight connection thrown in for good measure. I've tried to have American put us on easier flights on our date or even the day before, but they are just simply full, at least in first. They may be able to make some slight alterations to one of our flights, but this isn't one of those times where a schedule change will work in our favor and enable us to unlock much better flights.

A very long travel day with three flights, a relatively big time change to get to Hawaii, two hotels booked while we are there, and the reality that we will probably be tired before we even start the journey, and I'm no longer dancing the hula thinking about the trip. Instead, I'm starting to tip toe around a back-up plan. We have had great trips to Mexico the last two years, and I'm tempted to just try and go 3/3 with that logistically easier and much closer plan, but it is just not as simple to just throw in the towel on Maui as we have done to some other overly ambitious plans.

Reasons to Keep Trip to Maui:

As you can tell, I'm really on the fence with this one. I love Hawaii, and if I could wiggle my nose and transport us all there I know it would be great. But, I know that the trip as booked probably is too much work for the reward. I have to make changes at least to our outbound flights no matter what, but I'm just not sure if I should keep investing in a trip that may be another right trip at the wrong time, or if I should just pull the escape cord now and start over. On the other hand, this may just be a case of logistical cold feet and with some new outbound flights and over two more months of growing, this could turn out to be our best trip yet.

Spring break on a beach sounds perfect, but I'm just not sure what sort of Aloha to say to Hawaii this year.