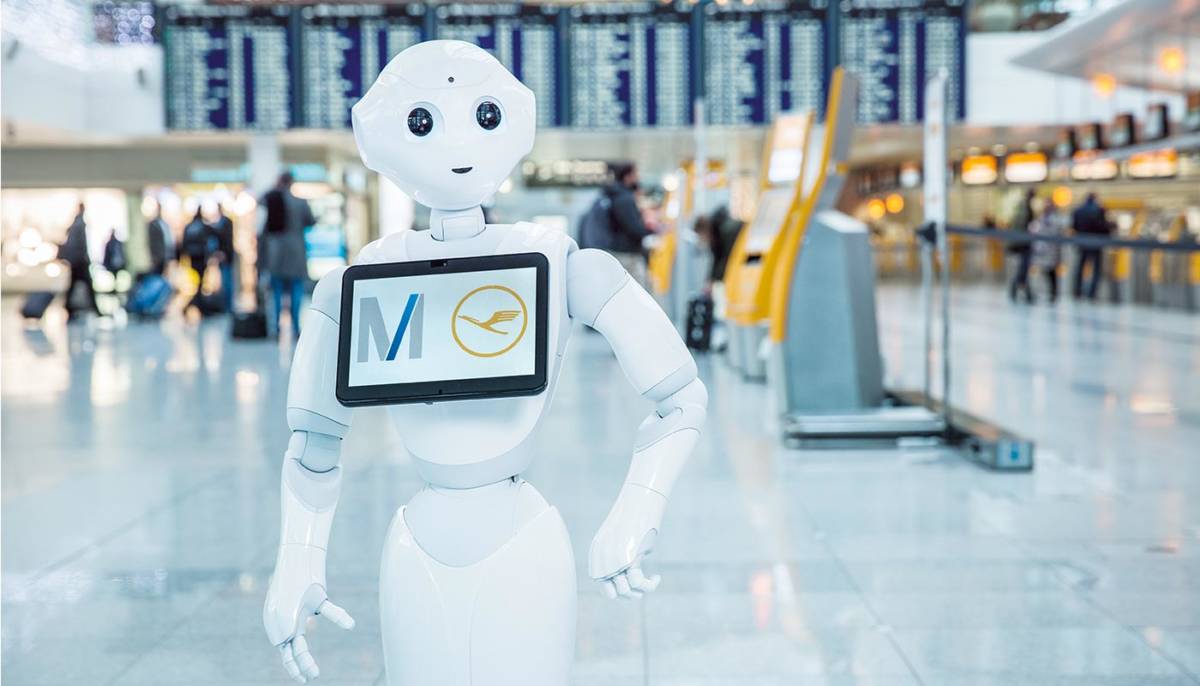 EVA Air's Latest Lounge Assistant Is a Robot Named Pepper
This post contains references to products from one or more of our advertisers. We may receive compensation when you click on links to those products. Terms apply to the offers listed on this page. For an explanation of our Advertising Policy, visit this page.

If you're flying out of or through Taipei's Taiwan Taoyuan Airport (TPE), swing by the EVA Air lounge to check out the extra-special attendant on site: a robot named Pepper. Here's his intro video from last month:

While this video shows him pulling a rolling suitcase, Pepper isn't quite ready to help out around the quite hectic TPE check-in desks. Instead, it's been assigned to the check-in desk between EVA Air's Infinity lounge and Star lounge in TPE's Terminal 2. However, another Pepper is assisting at EVA Air's international counter at Taipei's other airport: Songshan (TSA).

According to Taiwan News, EVA Air's Peppers currently only understand and respond in Mandarin — but the airline is working on adding English and Japanese languages. If you're hoping to catch Pepper at another airport, sadly "the airline does not plan to use the robot at other gateways."

Pepper was developed by Aldebaran Robotics — which is owned by Japanese company SoftBank — and has been deployed in various uses. He's already helping sell duty free items in Tokyo's Narita Airport (NRT) and selling pizza in Asia. Even wilder, last summer, I saw SoftBank developers trying to teach Pepper to play sand volleyball, which was a rather futile effort.

This morning, I dropped by the EVA Air's lounge to see Pepper's latest assignment. While I was there, passengers were far more interested in entering the lounge than checking out EVA Air's latest robot assistant. So, I didn't see him in action scanning boarding passes and providing "travelers with additional information such as their boarding gate, boarding time, and weather conditions at their destination."

But, Pepper wasn't bored. It turns out that, when he's not helping out lounge guests, Pepper loves to show off his dance moves. And, if you're wondering: no, Pepper doesn't do The Robot:

Aldebaran Robotics has also developed a much smaller cousin to Pepper named NAO. Like Pepper, NAO is deployed in performing all kinds of tasks, from working as a concierge at a Hilton in Virginia to playing soccer. Indeed, TPG contributor Katie Genter has been training a team of NAOs to play soccer for an annual competition called "RoboCup," even winning the worldwide competition in 2012.

While we are a very long way from the future imagined in the TV show The Jetsons, robots are slowly making their way into our everyday lives. We applaud EVA Air for taking this step, however gimmicky it might seem on the surface. Hopefully, EVA Air — and other airlines and hotels — will continue to incorporate friendly robots into assisting travelers with more mundane tasks, while not losing the ever-important human service element.