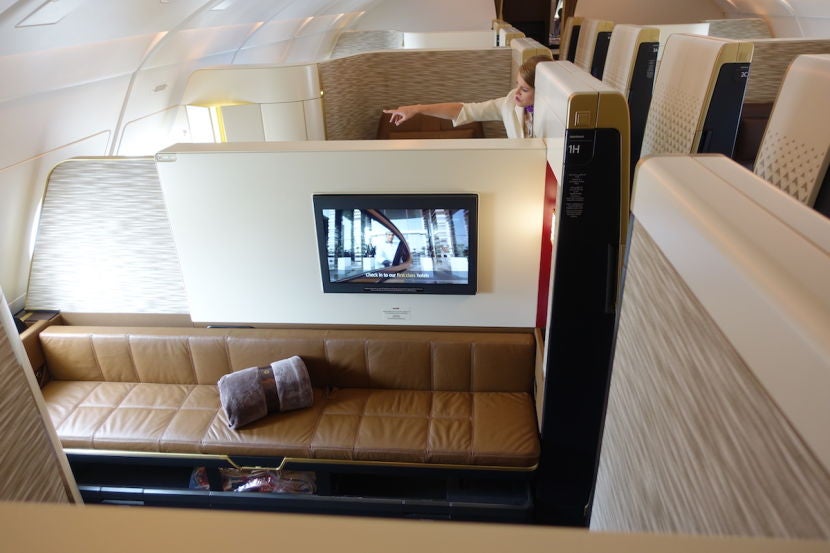 Excellent Etihad First Apartment Award Space Available to JFK
This post contains references to products from one or more of our advertisers. We may receive compensation when you click on links to those products. Terms apply to the offers listed on this page. For an explanation of our Advertising Policy, visit this page.

There are very few in-flight accommodations more luxurious than Etihad's First Apartment, but award space is often difficult to come by for the one route in and out of the United States, which is New York-Abu Dhabi. This is partially due to Etihad being fairly strict about releasing space, but also because there has been only one A380 operating on the route.

However, starting in June, Etihad will begin flying a second A380 between these two cities, and as a result right now there is plenty of open First Apartment award space on the return leg from Abu Dhabi to New York.

You can find this space by searching on Etihad's "Flights with miles" webpage for the flight from Abu Dhabi (AUH) to New York (JFK). Any days beyond June 1 that show Guest First seats available at 117,700 Etihad miles are A380 First Apartment seats at the lowest award level. If you see awards available at this level, you should be able to book the flight using your American AAdvantage miles as well — for a whopping 115,000 miles each way. You may need to call AA's Australia reservations line (+61 02-9101-1948) in order to book, as US agents have had issues accessing Etihad award space in the past.

Of course, the question you may be asking is "but how do I get to Abu Dhabi in the first place?" Well, even though Etihad is not releasing any space from New York to Abu Dhabi, you still have a few options.

The easiest might be to book your outbound flight from Washington-Dulles, where first class Etihad space to Abu Dhabi at 121,222 miles is relatively plentiful when you get about 2 months out from departure. If you're originating in New York and booking with a partner like AA, you should be able to tack on the positioning flight from New York to Dulles for no additional miles as long as there's saver level space.

Note this is not First Apartment space as Etihad flies a 787-900 out of Washington DC, but it's still a very nice first class option. However, since the First Apartment space for the return isn't readily available until June when the second A380 comes online, you'll have to book your First Apartment flight now and then wait and hope space opens up to get to Abu Dhabi as you get closer to your travel dates.

Another option is to book a business class award on Etihad's 777 from JFK to Abu Dhabi, which like the Dulles departure tends to open up closer to your travel dates so you have to have a little faith that you'll be able to find a flight down the line.

This is a terrific chance to fly in ultra-luxury on the A380, so if you've been dying to try out Etihad's First Apartment, don't miss out!

Featured image by A shot of the bench and monitor of a seat that's closer to the aisle.