I Think I Can On The Mt. Washington Auto Road!

A tale of climbing the epic Mt. Washington Auto Road in New Hampshire and passing through its four distinct climate zones in the peak of the fall foliage season with a hearty (and exhausting) 12% grade, as told by your local friendly rental car..,

Happy Holidays! Let me introduce myself, I am a full size rental car for a nationwide major car rental company. I have been one my entire adult life, as were my mom and dad. We take pride in our work and we consider ourselves to be ambassadors for our company. I live at Logan International Airport in Boston, Massachusetts, but I am on the road and away from home more often than not. I have been invited here to relay one of my most recent adventures.

It all started innocently enough as I was sitting in Row 11, along with some of my brothers and sisters at the Logan Car Rental Facility, when three fine looking clients came walking our way. They looked like my kind of people so I stood up a little taller on my tires and flashed my special little smile through my grill. I wanted this gig, so I even winked my headlights. Success! They chose me.

Turns out these three travelers were from Texas and were visiting the northeastern states to see our famous fall foliage.

They picked a good year to come, so I knew they would be happy customers. We started in Maine and then went to New Hampshire for a few days. The first of those days was so rewarding for my temporarily adopted family as they saw beauty surrounded by awesomeness all wrapped up in rich colors and framed by great weather. The day was easy on me as the roads were smooth, the terrain level, and I got to rest a lot as these people really liked to stop frequently to take in and explore the scenery. I thought that this was the perfect assignment, and I looked forward to tomorrow. 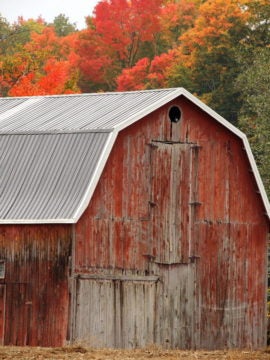 The next day came, and we headed north out of North Conway. I was excited, and my co-travelers were wearing the same smiles that I had already become accustomed to. We stopped to take a few photos here and there, and I heard my share of oooohs and aaaahs. 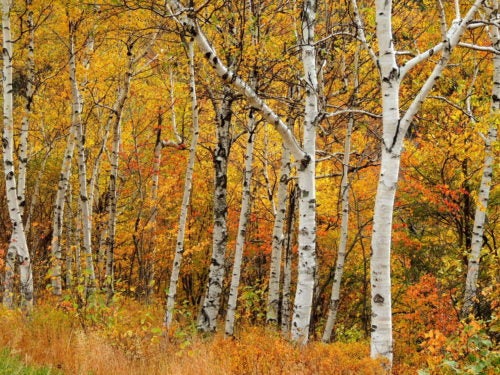 After about 45 minutes, my driver turned me off the main highway and stopped again for a photo. But this time, I was in the photo with a sign in the background, Mt. Washington Auto Road. 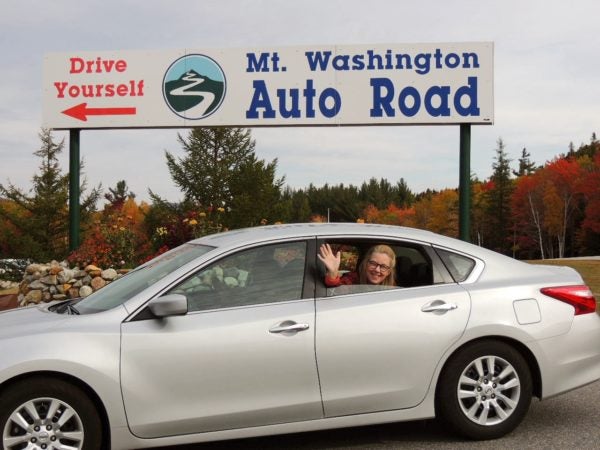 Mt. Washington Auto Road? I had overheard some whispered talk of this road back at the rental center, but I had no prior personal experience. I was a little nervous, as was one of the humans as we paid our fees. While my passengers were taking a brief pit stop (I thought only us cars made pit stops),  I looked up at the road ahead as it rose and disappeared into a forest of yellow, and I thought, ” It looks pleasant enough.” 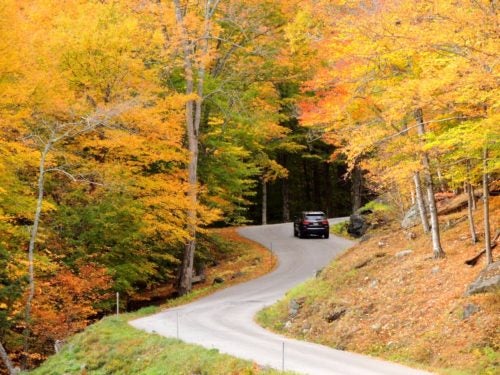 Soon we were off and the previously mentioned nervous person was holding onto my interior quite tightly. To be truthful, I liked the assurance the human touch brought me even if that was not the real intent or purpose.

The road was uncrowded but a little narrow and definitely inclined. I heard from the audio disc included in our fee that the road was about seven miles long but climbed at a steady grade of about 12%. The seven miles sounded good, the 12% grade not so much. I was built for travel on interstates with gas mileage being a top priority, not for being a ground based quad chair ski lift. I was breathing hard, straining and sweating. Luckily for all of us, there were several photo stops on the way up that allowed me to catch my breath and to cool off. 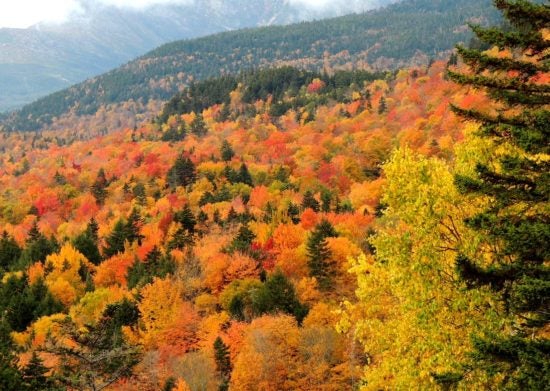 When we resumed our assault, I noticed my driver kept trying to put my gear shift in places it couldn’t go. I heard him mutter, “This car needs another low gear, OR TWO!”  I could almost read his thoughts, and he seemed to be thinking that if we are having trouble going uphill then downhill speed control will really be challenging. But I noticed he kept his thoughts to himself so as not to stress the rest of the group. I felt like apologizing for my lineage. My family DNA does not have any traces of mountain goats, jeeps, Clydesdales or snow cats. We are what we are, cruisers, not climbers.

There were a few times that we encountered a car coming down the slope that required us to move closer to the edge of the precipice disguised as a road. We all inhaled and held our breath trying to get skinnier. My partner in nervousness was now white knuckling me hard enough that it approached the “hurt so good” level. The car passed, we all exhaled and we scooted back to the middle of the road where we belonged.

The road to the clouds continued on its inexorable ascent, and I thought back to my days in car nursery school and to the story about the THE LITTLE ENGINE THAT COULD. 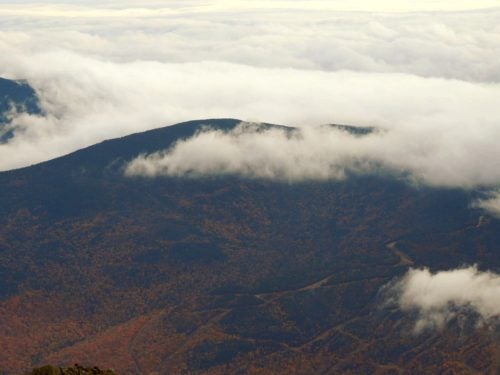 I remembered the story’s vital refrain, I-Think-I-Can, I-Think-I Can and I silently encouraged myself with that chant/prayer. A map of the road’s route looks like one recorded heartbeat from one of those diagnostic charts human’s get from having an EKG. I think there must be some symbolism involved there as there have surely been many skipped heartbeats in the history of this road.

About 30 minutes of being on the treadmill, the summit was reached. I stayed in the parking lot while my crew headed out to uncover the whys and wherefores of Mt. Washington’s weather. I could see by my people’s hair that it was real windy, and by their clothing that it was cold. That was all the weather info I needed. They were gone for over an hour, and while sitting there next to a cute redheaded SUV, I had plenty of time to just look around. Some of the things I saw that caught my eye was a building covered in rocks and one that was wrapped and tied down with big chains.I wondered why until I saw the sign about the highest recorded observed wind speed ever having occurred there. 231 mph!!

Whoa, that is faster than the straightaway speeds at the Indy 500! I am sure glad my driver engaged my parking brake. Also, I couldn’t help but notice a series of trains, cog trains I believe, climbing on tracks through the tundra type landscape. 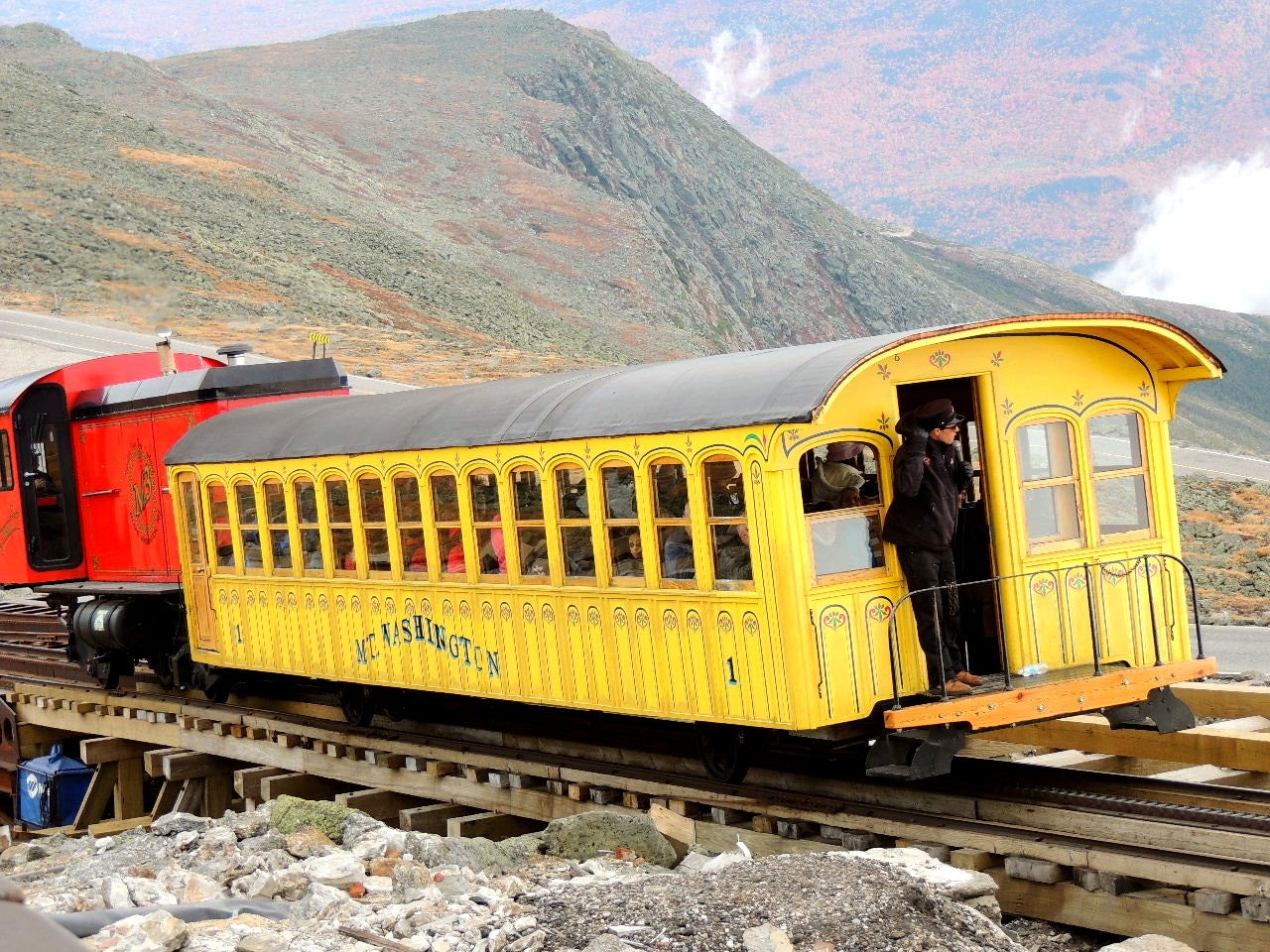 There seemed to be far more people riding these colorful trains to the top than were coming via autos. Hmmm, I thought, are they trying to tell us something? 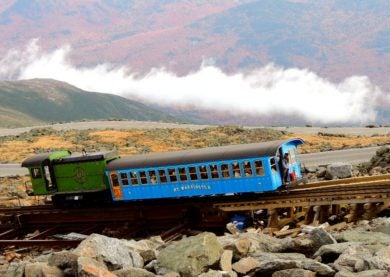 I may have dozed off for a few minutes, but I was awakened when my folks returned. Their skin was pink and their noses were runny as they de-layered and climbed in. They had a lot to say, and I listened intently. They said some of the reasons for the famous/infamous extreme weather here was the confluence of three distinct weather patterns, the directional lay of this mountain range and the proximity to the ocean. They also said driving up this seven mile road was climatologically like driving a thousand miles due north. Brrrr, somebody turn up my heater. They also said there was a major weather station, a museum, gift shop, restaurant and an interactive weather exhibit at the top of Mt. Washington. The mountain claims to be home to the most extreme weather in the world. 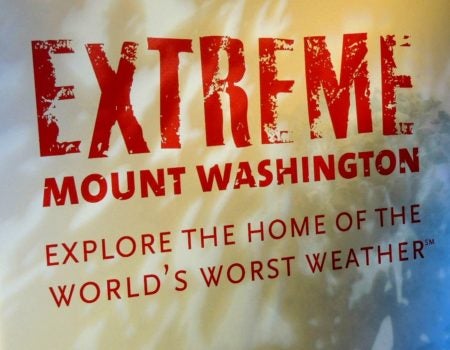 While this may be a convenient and beneficial blend of public relations and truth, there is no question this 6200 ft. peak carries an abnormally powerful punch. 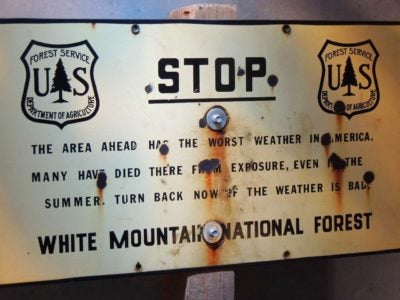 Then it was time to go down. My occupants knew by then that my transmission was more of a soprano than a bass and that gravity was going to win over my gear ratio. Consequently, my driver was tapping my brakes long before we came to the sign advising such action. That sign was followed shortly by one encouraging cars to occasionally pull over to allow hot brakes time to cool. My riders were very polite and discreet and acted like they wanted to stop frequently on the way down. They would say things like, “wow, here is a good place to stretch our legs”, or “look, the Appalachian Trail, lets stop and check it out.”

And, of course, there were numerous “stops for photos”. 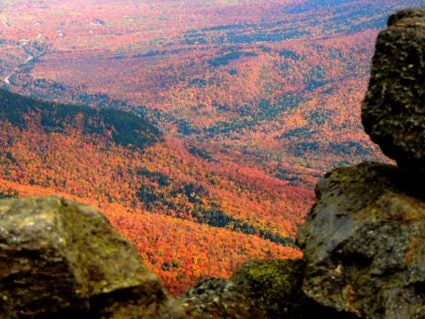 It seemed to me that all these stops immediately followed a hot smell emanating from my brakes. Coincidence? I don’t think so. but the road finally leveled off as we neared the base and we were greeted by some genuine Kodak moments. It was glorious and I was so relieved my people stopped for their benefit and not for mine. 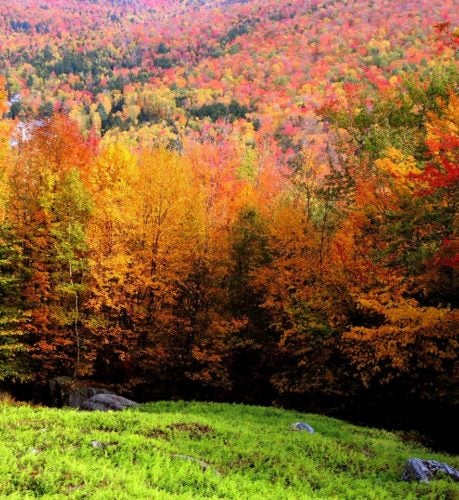 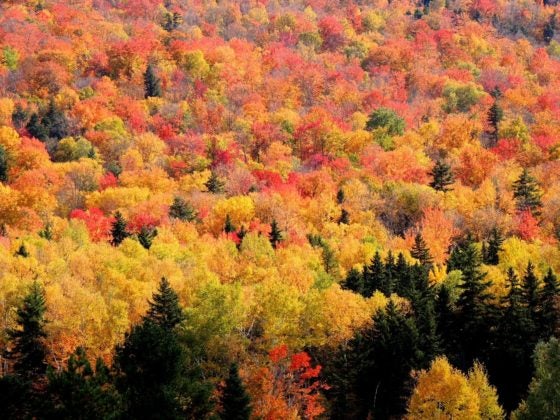 Soon, we were at the flat bottom. My team got out for some more photos and to eat a picnic lunch.

It had been quite a morning, and I had survived. By golly, I did it! My crew came back from Mt. Washington with memories, souvenirs, great photos and a grand experience. All I got was this darned bumper sticker.

And, I LOVE IT! Safe and Happy Travels.