Articles
Summer Hull , aka Mommy Points, ran the Mommy Points site for families who want to travel more for less using miles and points for seven years. She now heads up a variety of special projects at TPG when she isn't exploring the world with her own two girls.
Follow
Sept. 07, 2016
•
8 min read 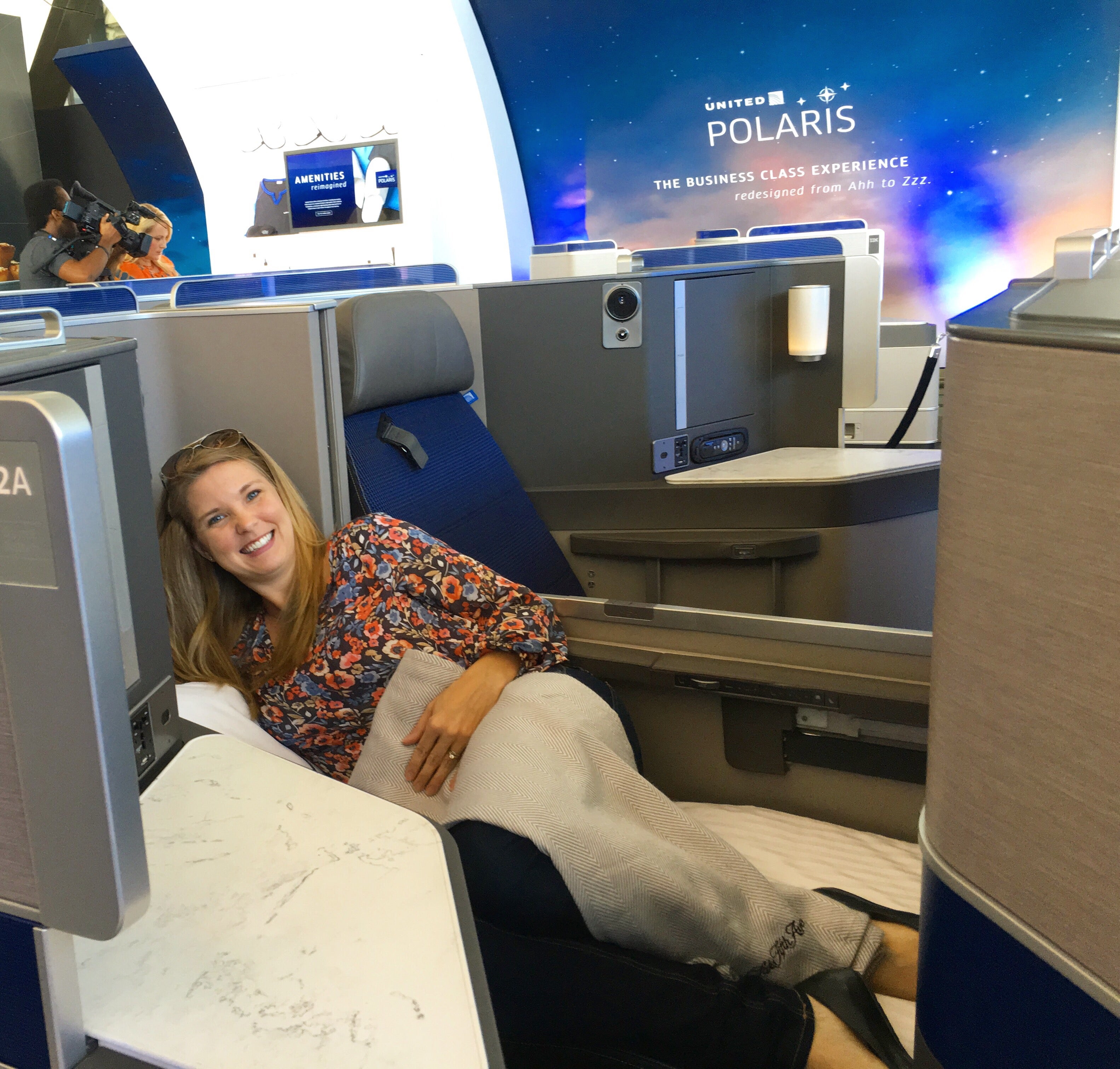 First Hand Look at the New United Polaris Business Class Experience
This post contains references to products from one or more of our advertisers. We may receive compensation when you click on links to those products. Terms apply to the offers listed on this page. For an explanation of our Advertising Policy, visit this page.

I like to fly business class for long flights not because I'm super fancy, or need caviar and champagne at the ready, or because I want to feel elite or special...I fly it (usually on miles) because I want to get as much sleep as possible on the flight to maximize my time on the ground. And though it probably sounds bizarre and maybe even Silver Spoon-ish to some, I also like my kids to be able to lay down and get as much sleep as they can, too. I don't need an Etihad Residence or Apartment in the sky in order to get some decent hours of sleep at 36,000 feet, but I do need to lay down, and preferably have a pillow and blanket. Anything on top of that, is just icing on the in-flight ice cream cart sundae.

Because I don't need over-the-top luxury in the sky, I live at a United hub in Houston, and I want to business class award costs as reasonable as possible, I have flown United BusinessFirst far more often than other premium airline products. It's a million times better than coach, but as far as premium airline seats go, it's not the fanciest experience out there. The seats are lie-flat, which is the most important aspect, but the rest is relatively perfunctory. I am totally okay with that.

However, I am also more than okay with United stepping up their game. I wrote about their total overhaul of United BusinessFirst into a new United Polaris experience when it was first announced, but today I got to experience what Polaris is all about first-hand at a media event at the Houston George Bush Intercontinental Airport.

It's more than a new business class seat, though there will (eventually) be that, too. It's really a whole new concept that touches everything from lounges, to the type of plates they use on-board, to the drinks served, to the in-flight menu, to the pillow selections, to of course the seat itself. Based on what United is saying, and what I saw today, this is not a new name to an old product, it's a new direction for their international premium cabins that they are deservedly very proud of.

The experience starts before you take-off with the nine new Polaris Lounges that will begin to open on December 1, 2016, with the first opening to be the Chicago Polaris Lounge near gate C16. Eventually they will be located in all of the United mainland hubs (other than Denver), as well as London Heathrow, Tokyo Narita, and Hong Kong. Some will be total new spaces and some will be conversions of existing United Clubs or United Global First Lounges. The Houston Polaris Lounge will be on the third floor of the current United Club in Terminal E with its own private entrance and elevator. Access to Polaris Lounges will be solely dedicated to those flying Polaris and not granted to those who simply have United Club membership, Star Gold status, have one-day passes, etc.

In the new lounges there will be full service sit-down meals available in case you want to eat first and then sleep more on the plane (or eat twice...). There will also be sleeping pods, a "mother's room" (though it doesn't sound like there are any family rooms), a bar with top shelf selections, nice showers, and more. The virtual reality tour they had of the lounge concept was really pretty impressive. It isn't Lufthansa First Class Terminal impressive, but it is certainly a couple notches above the current United Clubs.

Even though the Polaris soft products take-off on December 1, 2016, the new Polaris business class seats will be on a different time table. The first brand new Boeing 777-300 with the Polaris seat gets delivered to United in December 2016, and will reportedly do some domestic runs for a couple of months before entering international Polaris service in early 2017. And I very much hope to be on one of those first flights. It will take until around 2021 to complete the Polaris seat uprades, so be patient with this part of the overhaul. The new 787-10 and A350-1000 aircraft in the future will come with the new Polaris seats and some of the existing 767-300 and 777-200 fleet will be retro-fitted.

Some things I liked about the new seats are that they all have aisle access in a 1-2-1 layout, they offer under foot rest storage, the tray table, and side table, and cubby allow for ample in-seat storage, and the seat felt roomier than some of the United BusinessFirst seats I have flown in. It is 23 inches wide and extends to 6 feet 6 inches, so even my husband should be able to stretch out for sleeping. That said, it will probably still feel a bit cramped to some - especially if you aren't a side sleeper.

There are other nice touches with the new Polaris seats such as retractible privacy dividers between seats, a simple dial to put the seat into sleeper mode and back again, some nice soft lighting, a "do not disturb" indicator, 100% forward facing seats, and an overall great mix of privacy without claustrophobia overkill. Again, the seat will be the slowest part of this project to finish, so don't count on that being a definite on your United Polaris flight for a while to come.

I was also told that there will be bassinets in the new Polaris cabins, which is great news for family travelers. Sorry to those who hate the idea of babies in premium cabins...

The in-flight bedding will be available on December 1st, and it is pretty exciting. The bedding is from Saks Fifth Avenue and will feature a mattress cushion, a light day blanket, a heavier duvet, and a menu of pillows that includes a memory foam type cooling pillow that feels great - it's the blue one shown below. The seat I tried out today with the new bedding was really, really enjoyable. Even the old seats with the new bedding should be great.

They will also offer soft cotton pajamas and fleece slippers upon request on flights longer than 12 hours. The amenity kits on all Polaris flights will feature upgraded socks, a much-improved eye mask, and Cowshed products.

I didn't get to sample any food or drinks at this event, but the new Polaris menu will reportedly be much improved and designed in conjunction with Charlie Trotter-affiliated chefs. There will be fun touches added like a mimosa and bloody mary cart during the morning portion of the Polaris flights, an in-flight self service bar and snack area, and a chocolate truffle served with your pre-flight beverage.

As a United flyer and miles and points collector, I am genuinely excited by the direction United is taking with Polaris. I think the several years they put into designing a totally new premium cabin experience will pay off in terms of a new fun and enjoyable way to travel United. I'm glad I have United miles and Chase Ultimate Reward points at the ready to experience this new product sooner rather than later.

If you want to learn tons more about Polaris you can head to United's Polaris website or even check out my clips on SnapChat from today's event. I'm also more than happy to answer questions based on what I saw today.