Time to Re-Think "No Kids Allowed"

Articles
Summer Hull , aka Mommy Points, ran the Mommy Points site for families who want to travel more for less using miles and points for seven years. She now heads up a variety of special projects at TPG when she isn't exploring the world with her own two girls.
Follow
Sept. 10, 2016
•
9 min read 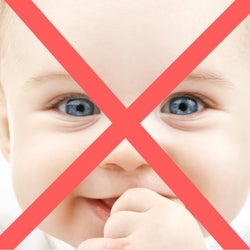 Time to Re-Think "No Kids Allowed"
This post contains references to products from one or more of our advertisers. We may receive compensation when you click on links to those products. Terms apply to the offers listed on this page. For an explanation of our Advertising Policy, visit this page.

I'm going to say something unintentionally divisive...children, even little babies, are real people that should be equally welcomed in many, if not most, places that other older people are allowed. They aren't pets. They aren't some alien species. They aren't monsters. They aren't second class citizens to be locked away until they can do Algebra and discuss literature. They are full fledged people who just happen to be smaller and younger than most adults. They are also still learning and developing at a rate much, much faster than almost all adults, and probably benefit from a variety of activities at least as much as adults.

Now I'm not by nature a "baby person". I didn't grow up fawning over babies and creating games to play with tiny toddlers as they passed. I babysat here and there as a teenager, but I was never and probably will never be one of those people who are intrinsically drawn to little ones. My own little ones are obvious exceptions to this as I am certainly drawn to them, but I approach this post not as a "babies are the best" person, but as an adult who lived 29 years as a child-free person and the last 6 and a half years with little ones.

These comments make me wonder at what point did we decide that children, and by extension those who have children, should be segregated from so many pretty normal and everyday activities of life? I read so many stories online about parents, especially moms, who suffer from varying levels of depression and feelings of isolation with young children in the home, and I can't help but wonder if it may very well be related to the perception that you can no longer do so many of the seemingly simple things you did before kids like get a haircut, get your nails done, go have coffee, see a show, eat dinner out, take a tour, go on a trip, etc.

Those may seem like superficial and surface activities that should be easily "sacrificed" when you decide to have kids, but the number of places where children may not be welcomed by some is actually pretty long. God forbid someone who is also getting their haircut hears a kid fuss for a few minutes. Along those lines,I actually can't even remember the last time I got a haircut because it is such a challenging thing to arrange with a baby!

If you have mustered up the courage and energy to take your young children on a trip only to get there and have the feeling or perception that they aren't welcome on the airplane, tours, attractions, restaurants, and more then that isn't going to be a very fulfilling experience. Leaving them behind while you go on a trip, or even to the hair salon, isn't always a realistic option for reasons ranging from having no one you trust to watch them, to most babysitters costing $15 - $20 an hour, to nursing and not being able to simply leave the little one behind for hours at a time.

I don't want to go to a restaurant, show, tour, or anywhere for that matter and hear a baby cry unabated for extended periods of time, or watch a toddler run amuck unsupervised any more than anyone else does, but those are very different scenarios than the mere presence of a young kid causing minor disruptions that come along with their developmental stage.

If a parent continues to actively parent their kid while out in public then that's what matters the most to me. If a baby is crying, the parent can (and usually does) try everything they can to help, and then bails out to walk around outside if all else fails. If a toddler throws a tantrum or tries to run around causing chaos, then a a parent redirects and again bails out if the behavior can't be contained.

The best way for a child to learn how to behave in public settings is to actually have a chance to be in public. My six year old was a rock star with appropriate airplane behavior by the time she was three years old because she had flown on the plane so many times when she was one and two. I hope the same learning-by-doing will pan out for my second daughter. She wouldn't have learned those same skills by just staying home.

Just as children are real people, parents don't stop being real people who like things beyond Chuck E. Cheese cuisine just because they now are responsible for little people. Parents still like most of the same things they liked before having kids, and should be able to sometimes enjoy most of those activities at times with their family. Sure they may have to eat more quickly, or earlier in the evening, or avoid the opera, or take turns outside bouncing a little one on a tour, or watch 34 episodes of Mickey Mouse Clubhouse on the plane instead of zoning out to Orange is the New Black, but that's a million times better than being relegated solely to the confines of their own home and the local Chuck E. Cheese for the next decade or two. Who really wins when children and their parents don't experience a variety of places and activities?

Many parts of the world are much better at integrating child and adult life than we seem to be here, but I think we would benefit greatly from viewing many things a little less as an adult or child activity, and a little more of a people are welcome activity, with the caveat that anyone causing a real disruption should excuse themselves. That courtesy would extend well beyond just crying babies, but also to arguing adults, drunk folks, those talking loudly on the phone, and many other pretty common scenarios.

That said, I don't think that children should be anywhere and everywhere 24/7 as that doesn't benefit everyone either. It's totally okay and even preferable for some places and activities to be for adults, but that's a far cry from the viewpoint that families should only step foot in McDonalds, bounce houses, and playgrounds for years on end. There are tons of other places that people from all stages and walks should be welcome, even if it is with a baby strapped to their chest.

I know not everyone will agree with this, and that's okay. I can only assume those who are the most upset by kids in public places have been around families where the parents were not actively parenting in public, and as a result the situation wasn't ideal. I've seen that in action too, and I've also seen adults who were not self-regulating themselves in public. There are bad apples in every bunch, but that doesn't mean all the others should be judged in the same light for just continuing to live their lives.

If you have kids and want to take them out and about in mixed company, then do it. Just please continue to actively parent and excuse yourself if the kiddos can't manage in that instance for whatever reason. Try again next time. It'll get better. If you would prefer to only see kids through the window at McDonalds as you walk right on passed on your way to an adults-only activity, please have just a little more patience and empathy when you are sharing the same space with a family. I promise that 99.99% of the time they aren't trying to bother you, they are just trying to continue on with life with their new reality of little people along for the ride.

Maybe in time we will see more innovative ideas for families like at Alamo Drafthouse where movies are normally for kids ages 6 and up, but Tuesday mornings are designated "baby days".

Another example is what Nibble+Squeak has done in New York City, Miami, Boston Washington DC, and London to host food events for babies, toddlers, and young children (and their caretakers) so that new parents can keep doing what they loved before kids, enjoy good food out with others.

Even though my kids get older with every passing day, and it won't be too long before our true "baby days" are behind us, I plan to continue to be a big advocate for families to get out there and keep living life for years to come. Of course do it in a thoughtful manner, but having a baby should not equate to a sentence of just staying at home and the bounce house for years on end. Be ready to hit the eject button if doesn't work out the way you hope but travel, eat dinner, see a game, take a tour, and don't feel like your kids always have to be segregated away at with grandparents or a babysitter. If you don't have kids, please cut families some slack and maybe even think a nice thought for them trying to teach their kids to interact and experience somewhere beyond just the playground. I think it is time for this country to re-think the "no kids allowed" mentality.