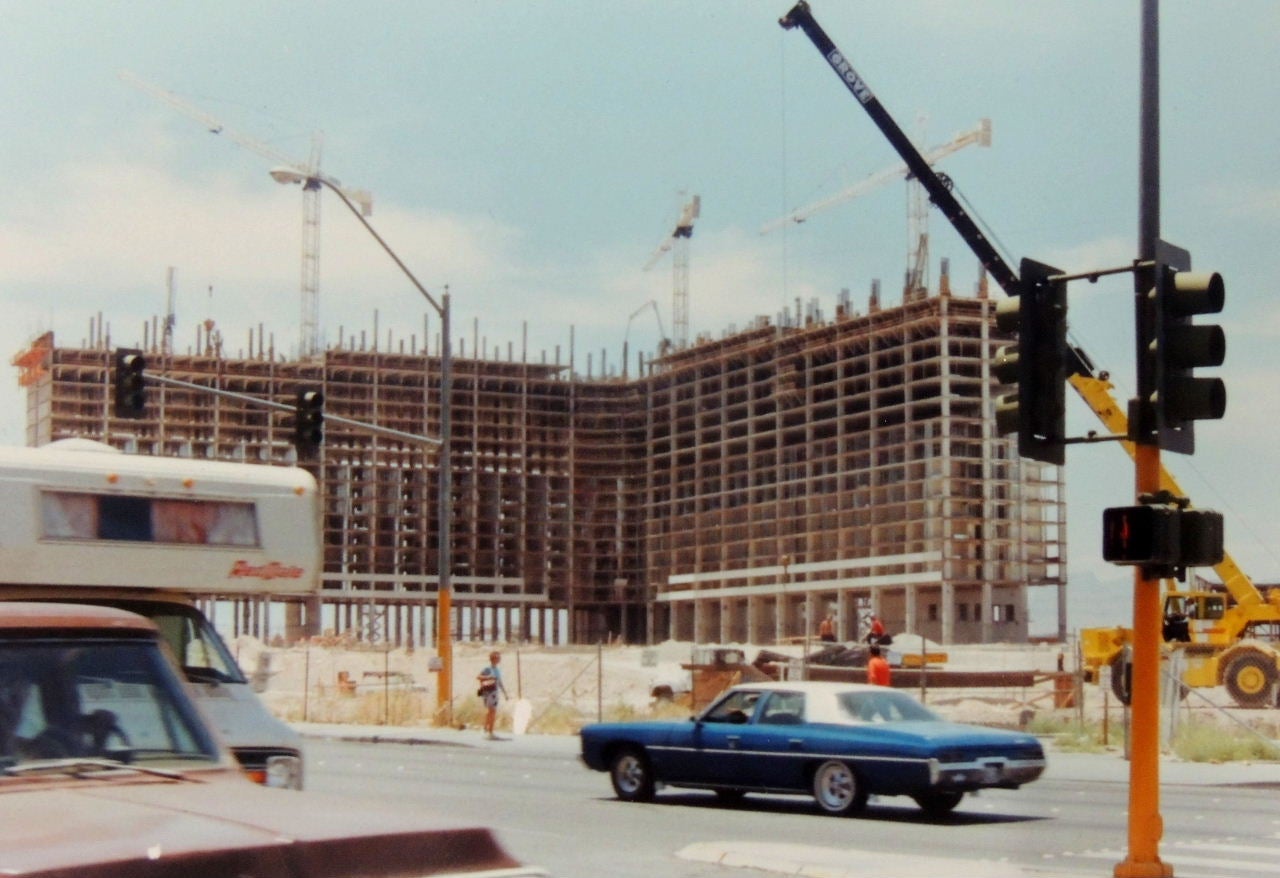 History of Las Vegas: 35 Years of Chasing Neon
This post contains references to products from one or more of our advertisers. We may receive compensation when you click on links to those products. Terms apply to the offers listed on this page. For an explanation of our Advertising Policy, visit this page.

My first interest in Las Vegas took root fifty plus years ago when I was a teenager. Two movies, Viva, Las Vegas and the original Ocean's Eleven planted a seed of interest in me for this part mystical, part mythical city of illusion.

The movies highlighted a city of excitement, energy, excess, exuberance and fun. One starred beautiful, young people, Elvis and Ann Margaret, surrounded by more beautiful and young people doing what young and beautiful people do. And the second featured the ultimate cool, The Rat Pack. They were hip, smart, funny, handsome and talented. I wanted to be an amalgam of them all. I know they were robbing casinos, but they had such style.

The Vegas movie roles these stars portrayed were fictional, but, in real life, all proved to be quintessentially iconic performers on the stages of Las Vegas. They became synonymous with the city and were essential components of the Las Vegas I was attracted to. Their footprints still echo throughout Vegas even today.

From these movies and from the many photos I had seen of Las Vegas, it was also obvious that Vegas was like the mother of all light displays. Anyone that knows me, is aware that I have always had a true fascination and a deep passion for Christmas and holiday lights. I believe I must have some neon in my blood that causes this obsession. Vegas and myself just seemed to have an inherent twinkling, chasing and blinking connection.

Plus, I was like every other man chasing dreams and pots of gold. We all know that a fortune is only a roll of the dice away, riches are coming with the next deal of the cards and that the slots "are due."

Las Vegas to me at the time was like this expected and needed right of passage from reality to fantasy, from youthful exuberance to young adult excitement. It was sort of a quest, a search for the Un Holy Grail. "Bright lights, city lights...."

However, life interrupted as it sometimes does and soon 15 years had fast forwarded before I, we, made that first Trip to The Strip. But time and circumstances had not jaded our enthusiasm as we boarded our Sun Country FunJet wide-eyed and full of excitement.

We didn't know exactly what to expect, but we knew that our 3 day and 2 night inaugural trip would only be an appetizer for the entire buffet Vegas had to offer. We were the ultimate neon newbies and kind of had the same perplexed but ecstatic feeling that occurred when we brought our first born, Mommy Points, home from the hospital.

Okay, we did it, she is here and,....now what? So, we stuck our toes in the proverbial waters, threw caution to the wind and put our nickels in a slot machine. We won! Three cherries, we won! But, what did we win and how do we get it out of the machine? We had to ask. We literally had to ask how we could get our 75 cents out of the machine. Maybe we should have also asked, how do we get our money back when we didn't win. All the machines back then took real money and paid out in real money. Oh, the great clink, clink, clink sound as the coins dropped into that metallic bin. I miss that sound.

There was something intimate between you and the machine when you used real coins and currency. It was slower and more personal. And you just hoped you needed to take one of the casino's endless supply of buckets to carry your coins around in. It was like a trophy, the spoils of victory, exclaiming that you were the man, the winner. In direct conjunction with the usage of coins was the ubiquitous presence and need for the individual hand cleaning wipes found on every bank of slot machines. It was good to take spares and toss them into your bucket. Coin usage was also good for the local employment as it created many "change person" jobs in each casino. "Change, change, anyone need change?"

The Las Vegas we saw, experienced and absorbed was so much fun and was exactly like it was supposed to be, very different from our everyday life. Very different. And the Vegas we encountered in 1982 and for the next few annual visits was so different than the Vegas of today. It was actually closer to the Rat Pack heyday Sin City than the sleek urban "What Happens in Vegas, Stays in Vegas" image of 2016. The hotels then were primarily the hotels of the 50s. The Sands, Dunes, Hacienda, Stardust, Aladdin, Sahara, Flamingo, Desert Inn and Caesar's Palace were the anchor hot spots on The Strip.

Vegas had taken a hit in the 1970's and early 80's with the depressed economy and the negative national vibes from the mob connections. There was little to no new construction and Vegas was a city mired in stagnation. It was, obviously, almost entirely dependent on the gambling revenue for its survival and reason for being. It still had a national monopoly on casino action and sports betting and visitors went there to do what they could do nowhere else, GAMBLE. Try your luck, see a show, have a drink, and try your luck again. The focus, the action, was the casino.

And from this distant perspective, the hotels, casinos and the city were showing their age when we first visited. The casino/hotels then sat back from the strip much more than the buildings of today that now seemingly rise from the curb's edge. And, at that time, most of the resorts had motel like accommodations behind the main casino that housed the guests and not the mega towers that now fill the desert skyline. Most of the properties then had rooms totaling only in the few hundreds and parking was generally conveniently available near the front of each casino and not in the multi-storied garages that have now become the essential norm

Vegas became an annual must do for us for many years. We stayed at resorts up and down the strip and downtown too. We even subscribed to the WHATS ON in LAS VEGAS magazine for several years to keep our appetites whetted and enthusiasm amp'd. We gambled with our quarters, saw the free and the inexpensive shows with an occasional headliner thrown in for historical, entertaining and name dropping purposes. We watched as the city morphed and reinvented itself time after time. We will never forget a sign we saw in the late 80s as we drove from the airport to the strip. The sign was advertising the hotel/resort that was to be a game changer in the complexion and the future of Vegas. The sign read, WE APOLOGIZE THAT THE MIRAGE HOTEL/CASINO IS NOT SCHEDULED TO OPEN TILL THE SPRING OF 1989. UNTIL THEN, TRY TO HAVE A GOOD TIME ANYWAY.

We literally watched The Mirage take shape. We marveled at its size, its expense and its promise. It lit a match in Vegas that has yet to be extinguished and it started a building boom of historic proportions. It was as if a volcano went off. Oh wait, a volcano has gone off 10+ times a day ever since.

Older hotels were imploded and replaced with bigger and better. Empty stretches of desert land gave birth to new dazzling properties. It was as if everyone was playing "whatever you can do, I can do better." If the volcano was good, The Eiffel Tower tried to be better. If you liked the sinking of a frigate, you might like the canals of Venice even more. If a roller coaster racing between the skyscrapers of New York attracted you then maybe a Sphinx and a pyramid would also grab your attention.

If you fancied a tree covered hillside with a roaring waterfall, then a multi acre lake with fountains dancing to the music of Ol' Blue Eyes would be worth a look.

2,000 room resorts gave way to 3,000 room resorts. And then 4,000, then 5,000, 6,000 and 7,000. Construction cranes became the unofficial City Bird. The huge beckoning and identifying resort signs that once upon a time shown brightly and distinctly on the open desert floor became mostly lost to the distant eye by the wall to wall megastructures. Las Vegas Boulevard has become more of a canyon than a strip. The end of one millennium and the start of the next was a 15 year period of dizzying and remarkable change and growth. Even if you came every year, it was hard to keep up.

Next, we will examine other changes we have seen and experienced. Feel free to tell us of your Vegas adventures and memories and until then, ELVIS has left the building.

In the meantime, if you want some other looks back in time, here are Grandpa Points' posts of the history of travel during his lifetime. First from the 1950's - 1960's, and then from the 1970's to present day.

Our points-obsessed staff uses a plethora of credit cards on a daily basis. If anyone on our team wouldn’t recommend it to a friend or a family member, we wouldn’t recommend it on The Points Guy either. Our opinions are our own, and have not been reviewed, approved, or endorsed by our advertising partners.
See all best card offers
Related stories
News
Earn 20,000 bonus points with no annual fee: The Wells Fargo Autograph Card
News
Epic West Coast snow is being measured in feet, not inches, this winter; here's what you need to know
News
How Universal is stepping out of the mouse's shadow to become the hottest theme park
Guide
Cruise packing list: The ultimate guide to what to pack for a cruise