I Can’t Believe I Missed This SPG Opportunity!

Ahhhhhhh. I failed. I was almostohsoclose to being able to do something really cool and I missed it before I even knew that I could do it.

Earlier today I saw an email from Starwood Preferred Guest about SPG Moments, one of my very favorite programs where you can use your SPG points to access amazing events ranging from sold out Adele concerts in London to Luxury Boxes at Wrigley Field to the US Open. In the email it alluded to the Ryder Cup.

The Ryder Cup is a golf tournament that is held in the United States only once every four years. This is one of those years. The tournament features Team USA vs Team Europe, and it is a pretty exciting tournament, at least as far as golf tournaments go.

I’m not exactly the world’s biggest golf fan, but even I can appreciate this tournament. My dad, however, is a big golf fan. He is also a really simple dude who gets extreme enjoyment out of a number of pretty simple but very select things. Golf is one of those things. So is the free ice cream machine at Jason’s Deli when it is set juuuuuust right. He has a cousin-in-law who has won the Master’s, and as such he has had the supreme luck to attend that prestigious affair a couple of times, but he has never been to the Ryder Cup.

I know he has entered the lottery to try to buy Ryder Cup tickets the official way a number of times, but he has never been selected. Of course since it just happens in the US once every four years there aren’t exactly a ton of chances to be able to scoop up these tickets anyway. A very quick StubHub glances puts grounds access tickets for the week at about $1,300 each – in other words, solid ‘ain’t gonna happen’ territory.

I opened up SPG Moments website based on the mention of the Ryder Cup in the email expecting there to be one or two Ryder Cup opportunities, most likely in the form of an auction where the winner would probably have to spend six figures worth of SPG points to attend the Ryder Cup. A package like that does indeed exist, but there’s more. Much more.

There was a package where two people can attend the Ryder Cup tournament every day for just 20,000 total SPG points! What?! How did I miss this?! Ahhhhhh! Fail, fail, fail. Of course, that package is now sold out. Whoever bought that is a genius and I hope they enjoy every second. 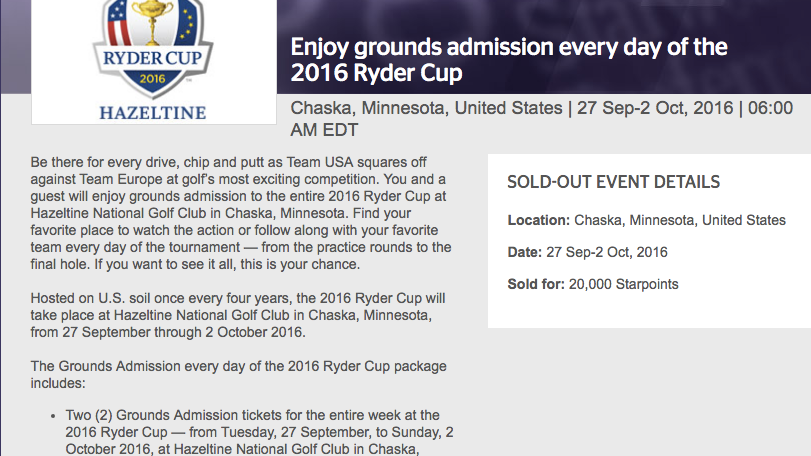 There is still a practice round opportunity for just 5,000 SPG points, which is also a great deal if you are into practice rounds. There are some other more pricey Ryder Cup packages available in the 35,000 – 45,000 point range.

I can’t believe they had such a great opportunity to attend the entire Ryder Cup for just 10k points per person, and I certainly can’t believe I missed it!

Clearly it’s too late for you to get that now sold out package either, but take a look at the other Ryder Cup packages if you do have interest in the Ryder Cup. Even more importantly, absolutely check SPG Moments from time to time as you never know what amazing opportunities your SPG points might get you beyond just hotel rooms!

Summer Hull , aka Mommy Points, ran the Mommy Points site for families who want to travel more for less using miles and points for seven years. She now heads up a variety of special projects at TPG when she isn't exploring the world with her own two girls.
You might like
Here’s why one hotel chain is investing in summer road trippers with this new app feature
News
2h ago
Go here, not there: overlooked European islands you need to visit
News
Yesterday
Relying on ride-hailing services: How to work the system so you aren’t left without a ride
News
Yesterday