Using Southwest Rapid Rewards to Save Huge on Flights

Articles
Summer Hull , aka Mommy Points, ran the Mommy Points site for families who want to travel more for less using miles and points for seven years. She now heads up a variety of special projects at TPG when she isn't exploring the world with her own two girls.
Follow
Jan. 06, 2016
•
4 min read 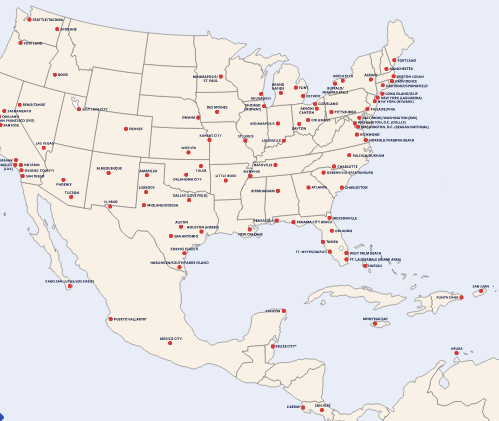 Using Southwest Rapid Rewards to Save Huge on Flights
This post contains references to products from one or more of our advertisers. We may receive compensation when you click on links to those products. Terms apply to the offers listed on this page. For an explanation of our Advertising Policy, visit this page.

There are certain airline frequent flyer programs that are the "golden children" of many miles and points fanatics because of their award charts, redemption sweet spots, routing rules, destinations, partners, etc. Then there are the others that aren't often thought of in the same light, and aren't usually given the same amount of attention on the blogs, forums, etc. Southwest Airlines Rapid Rewards is one of the programs that sometimes gets a little neglected in the airline mileage discussion even though they are actually a pretty popular program for actual travelers.

Of course if your travel goals are primarily comprised of international lie-flat first class flights, then Southwest is not the primary program for you, but even then they are not to be ignored completely. While their award prices are tied to the selling price of the ticket, this can still result in a better value than many other "traditional" programs.

Save Big on Award Flights via Southwest Rapid Rewards

I'll give you a real life example of how much better of a return Southwest can get you for your points than a traditional program via an example spring trip from Houston to Cancun. While those are the destinations in this example, the same principles will hold true from many different cities. Remember Southwest flies internationally to Montego Bay, Aruba, Punta Cana, Nassau, Puerto Vallarta, and more.

American Airlines and United both charge 35,000 miles round trip for a saver award from the mainland US to Mexico (though American is dropping that to 30,000 when the new award chart kicks in). That isn't necessarily a bad price since selling prices can be high at times on that route, but if Southwest operates in your area you can potentially do much better.

Depending on your travel dates, you can fly round trip from Houston Hobby to Cancun for as few as 9,660 Southwest Rapid Rewards points + taxes. That isn't 9,660 points each way - that is a round trip price!

Compare that to the 35,000 miles via several of the other traditional programs and the savings is pretty staggering. Multiply that out by a family and you can almost get four people to Cancun and back via that Rapid Rewards price than you could get one person at 35,000 miles via other programs.

Of course your travel dates may cost more than that lowest point price, but the idea remains the same. Fixed value programs don't always mean that awards cost more than via other programs - in fact, they very well may cost less on many travel dates. In some cases it costs much, much less. Not only that, but your return per point can actually be quite good. In this case, you are getting about 1.8 cents in value for your Rapid Reward points vs. paying cash for the Southwest flights. If you aren't loaded with Southwest points remember you can also transfer them in 1:1 from Chase Ultimate Rewards.

If you have a Southwest Companion Pass where you can bring someone with you on Southwest flights by just paying the taxes/fees for the second ticket, then you are coming out even more ahead! In fact, now is a great time to go for the Companion Pass utilizing the 50,000 point sign-up bonuses from the Southwest credit cards (including the business version) since the pass is good the year you earn it and all of the following year.

Getting one person to Cancun and back for 9,660 points + taxes is amazing. Getting two people round trip tickets for that price is pretty much insane. Lesson being, don't forget to check Southwest Rapid Rewards when comparing points prices for your vacations!

Has your family had some serious point wins using fixed value programs like Southwest? Can you tell I am seriously dreaming of us some fun in the sun?