Articles
Summer Hull , aka Mommy Points, ran the Mommy Points site for families who want to travel more for less using miles and points for seven years. She now heads up a variety of special projects at TPG when she isn't exploring the world with her own two girls.
Follow
Dec. 07, 2015
•
5 min read 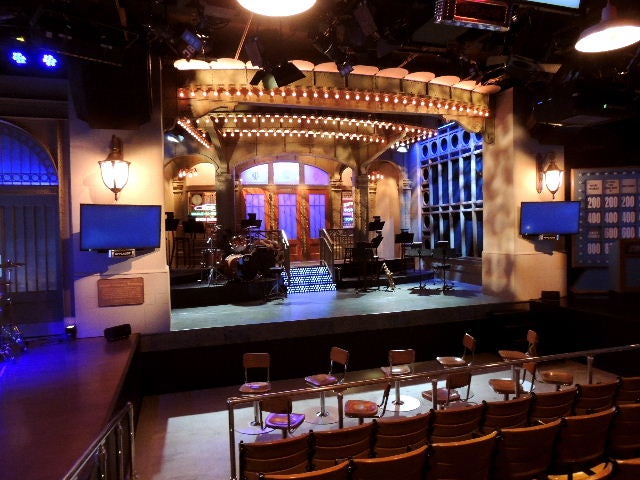 NYC Recommendation: Saturday Night Live The Exhibition
This post contains references to products from one or more of our advertisers. We may receive compensation when you click on links to those products. Terms apply to the offers listed on this page. For an explanation of our Advertising Policy, visit this page.

My little family of four is currently in NYC, but while we are here my dad (Grandpa Points) was willing to share one of their favorite activities from their NYC trip a couple of months ago!

We were in our mid twenties in 1975 and the Vietnam War was in its final days. Monday Night Football was becoming a must see phenomenon and Johnny Carson ruled the Late Night. In fact, it was Johnny that was partly responsible for the creation of another television and pop culture needle mover when he encouraged his re-runs not be shown on Saturday nights, but rather be saved to run on weeknights in order for him to have more days off. To fill this weekend void, NBC executives hired some young guns to come up with a variety type show alternative. The rest, as they say, is the stuff legends are made of as the famous intro " Here's Johnny" gave way to the birth of "LIVE FROM NEW YORK, IT'S SATURDAY NIGHT!"

We were soon introduced to a group of young comics who pushed the envelope, who were both slapstick and slick, outrageous and original, human and humorous. They sometimes made us blush with their off-color and politically incorrect offerings, but they also consistently made us laugh and look forward to the next week, the next show. The unknowns became the mainstream, the new kids became the celebrity. Studio 8H was the center stage for the rise of almost every significant North American comedian then and in the four decades since.

The characters created took on a life of their own and the cast became a part of our entertainment fabric, their catchphrases a part of our national lexicon. We grew up with SNL and we shared in its triumphs and in its tragedies. It is from this background that we were thrilled to discover Saturday Night Live: The Exhibition on a recent trip to New York City. This museum type attraction is on 5th Avenue at 37th St, halfway between Grand Central Station and The Empire State Building.

If you are a fan or aficionado of the show, this destination is for you. It is quite extensive and offers a comprehensive commemoration of the show; its history, its heart, its soul, its brains, its guts and its glory. The highlights are all here. Actual sets, props and costumes are displayed throughout and are accompanied by video replays of many of the show's greatest and funniest moments.

There are several interactive opportunities as you progress through this 40 year time capsule. After you have had your nostalgic fix, you become part of the team as you are taken on the six day journey to put the show together. The work week is chronicled in a day to day development from the embryonic "idea" cocoon stage to the, hopefully, beautiful butterfly taking flight with the live performance. The process seems to be a combination of a coordinated high wire balancing act and a throw it out there and see if it sticks kind of randomness. The end of the self guided tour is your reward for your six hard days nights of preparation

It is at this point that you enter Studio 8H and take your seat. The lights dim, the music comes up, and, real or imagined, your hear the voice of Don Pardo boom " IT'S SATURDAY NIGHT".

The guest host for your "special edition" showing is Tina Fey and the production value of the offering is outstanding. The reproduction of Studio 8H and the combination of cutting edge video, lighting and exact proportionality gives you the feel of a live performance. Bravo, SNL Exhibition, Bravo!

The exhibit costs $29.00 for adults and $20.00 for children. There is a discount for seniors. "YEAH, THAT'S THE TICKET". Discount tickets are often available elsewhere, such as here or via some combos with tickets to other attractions, so do some google searches to see what you can find before your visit. I would allow 1 to 2 hours for full absorption of all that is offered.

To sum it up, SNL Exhibit, "YOU LOOK MAH-VELOUS". The attraction appealed to all fans even the "2 WILD AND CRAZY GUYS" and those heavyweights wearing "DAAAAA BEARS" jerseys who looked like their life goal was to "CONSUME MASS QUANTITIES" of beer and brats. This museum will "PUMP YOU UP", make you want to "PARTY ON" and leave you saying, "WE'RE NOT WORTHY."

The only bad news is that the exhibit is set to close in January. I can hear the cynics espousing "WELL, ISN'T THAT SPECIAL" that we are recommending this so late in the game. But, I believe better now than never and as Roseanne Roseannadanna said, "IT'S ALWAYS SOMETHING".