From Middle Class to First Class and Back Again

and are ticking off “bucket list” destinations quicker than they ever thought possible thanks to miles, points, and travel deals.  They have an intense love of this country, of its National Parks and treasures, and have no problem with a clean budget hotel room and an economy airline seat on a budget airline as long as it gets them where they want to be.  A photographer by trade, his adventures are usually captured not just in his mind, but in his camera.  He shares his thoughts and travels here from time to time, and I’m excited to share another one of their adventures.

My wife and I recently represented Mommy Points at a SPG Amex event at the US Open tennis tournament in New York while she stayed home to take care of her new baby. 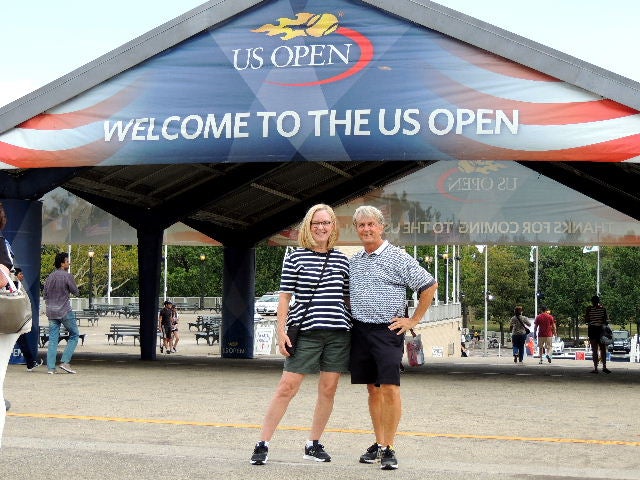 Our airline tickets on United operated flights to Newark were provided by SPG Amex. Our seats were in coach, Row 31, seats E&F.  Mommy Points got excited about the aircraft for us as it was an internationally configured 767 plane with lie flat First Class (BusinessFirst) seats. Since our tickets were purchased pretty close to the travel date, they were in a pretty high (aka pricey) “fare class”, Mommy Points paid a bit more to upgrade our seats economy to First Class without telling us as a fun gesture since we, and especially me, are about the furtherest thing from regular first class travelers.

As indicated, I had never flown First Class before. The closest thing to first class was the  “Big Front Seat” on a Spirit Airline Flight that I was moved to due to a problem with my assigned seat. I had not flown First Class before for many reasons. I had not had the need that might be found with a long haul transoceanic flight or the comfort and sanity that frequent business travelers must surely appreciate and find there. I did not, do not, have the extra money, the additional miles and points, or perhaps even the right personality for First Class travel. I am also a smallish person and do not need extra knee room to stretch out to avoid DVT, muscle cramps, or basic discomfort.

I am a simple person who came from very modest means. I easily find pleasure and satisfaction in life. I am the definition of “middle class” although my daughters might, appropriately at times, suggest I have no class (psst no we don’t!). I know that I am in the wrong zip code when there are more than 3 pieces of silverware or more than one glass on the table. I gravitate to essentials before extras. I, to this day, still marvel at air flight. I consider it, by itself, to be an amazing reward. So, when I board the aircraft, I am looking forward to the experience and thrilled that in a few hours I will be at my next destination.

So when we boarded the 767 that day, I was excited, but oddly nervous. It was like I had been invited to a State Dinner. State, as in panic, confusion, unrest and shock. Was my Notre Dame shirt too casual? Did I need a coat and tie? What if I spill my food? What if I couldn’t get my lie flat seat back to “its full and upright position”. Yipes, I realized we were not in Kansas anymore. Being a large and internationally configured flight, there were flight attendants everywhere. I felt as though they were all watching me. Thoughts raced through my insecure mind, I hope I don’t trip, I hope my underwear doesn’t fall out of my luggage, I hope..well, I just hope.

We made our way to our mini suite of temporary residency. 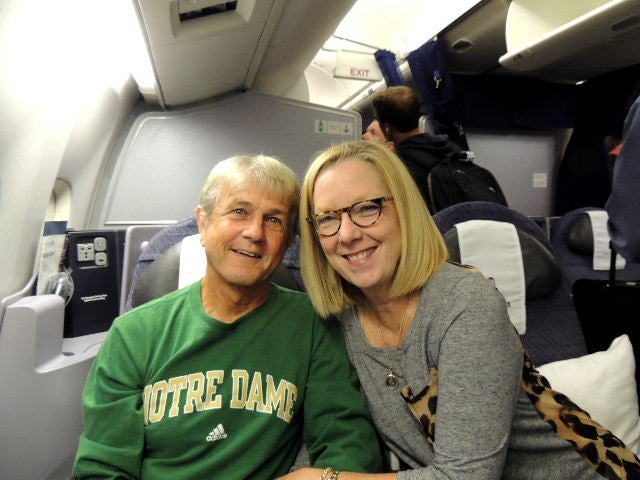 I then became a little surprised that each seat was not individually air conditioned, heated and massaging. I settled in to my large recliner and looked around at the other 29 First Class travelers. They all seemed to certainly look more important than me. I looked for my safety zone, the window, and I did what I do best. I observed.

I saw the morning coming into view as the light slowly increased its brilliance.

I watched airport personnel do their respective things and I watched the occasional aircraft taxi by. I was unsure if they were coming or going.  One of our many flight attendants came by and asked if we needed anything, so I brought my attention back inside the plane. I reached into the seat pocket for a magazine. I thought to myself, in the days of SKY MALL, did First Class get the NEIMAN MARCUS version?

The plane was quiet due to the approximately 4:00 AM wake up that everyone would have had to catch this early morning flight. Our takeoff and ascent were really smooth as we headed down the Texas coast. I will say the windows in First Class are very nice, and I utilized them fully to look for landmarks, cities, cloud formations and other airplane traffic whizzing by in the opposite direction.

Soon a flight attendant came by holding a white towel with a pair of tongs.  Okay, I mentioned previously about a lack of class. Well, my first thought was that if the attendant didn’t want to touch the towel then I sure as heck didn’t want to. Then I considered the possibility that I had toothpaste on my face and I was just being offered a towel to wipe it off. My next mental option was that perhaps a fresh shave was standard on these flights. In what must have seemed like an eternity, I finally grabbed the towel like I knew what it was for. Whew, I was glad when that was over.

Next, our breakfast request was taken. The offerings were quiche or french toast with both being complimented by a fruit bowl, sausage, and a croissant. My wife opted for the quiche and I went for le french toast.

However, too many of the other FirstClasser’s must have gone for the french toast as my choice could not be fulfilled. But, I did get two bowls of fruit as in flight compensation.

The food was quite good and I didn’t spill anything on my shirt. Success!

After breakfast had been cleared, we had about 1/2 of the flight still ahead of us. My wife quickly fell asleep in the now horizontal lie flat seat. I must admit she has a wonderful condition that I call “instant sleep”. I do not share this condition. I alternated between peering out the window and watching the real time flight monitor on my personal screen. I like knowing where I am, how fast we are going, how far we have been, how far we have to go, and how cold it would be outside if I needed to take an EVA.

Finally, I decided for the sake of science (and this blog) that I needed to try the sleeper/seat out. It was nice, it was very flat and roomy, and it worked nicely as I did go unconscious for about 20 minutes. I then awoke needing to know where we were, how fast we were going, etc…

Soon the flight arrived in Newark and we said goodbye to First Class. I did notice how odd it seemed for so many business people in their expensive looking suits to be exiting from First Class with “bed heads”.  It was a cute and interesting visual optic.

So, I appreciate my one incursion into First Class. From now on as I enter the aircraft in boarding zone 3 or later, I will pass through First Class and nod fondly as I make my way to my seat near the wing. It is actually my self appointed duty to be the wing man for the rest of the passengers. From my post, I am able to inspect the wing, to check its dynamic strength, flex and camber, to check for oil leaks and to be sure no one steps on the ” do not step here” part of the wing.

I can watch the pilot do his pre flight inspection and monitor to see if the tanks are topped off. I have an important job and I must proudly boast that I have had a 100% success with “my wings”.

And to paraphrase a famous movie quote-“fellow flyers, we ride on a plane that has wings, and those wings have to be guarded by men with eyes. Who’s gonna do it? You? I have a greater responsibility than you can fathom. And deep down in places you don’t talk about at parties, YOU WANT ME ON THAT WING, YOU NEED ME ON THAT WING”.

And that’s where you’ll find me.

Mommy Points Tip: If you ever want to experience first class on a flight like this, don’t always assume it is unattainable. Even if you don’t want to spend the additional miles to book first class on an award ticket, you may be surprised at how minimal the price differential sometimes is between coach and first class as pointed out in this post.  I by no means think all travel needs to be done at the front of the plane, but there’s no doubt it is a fun treat to experience at some point if you have the opportunity.

Summer Hull aka Mommy Points, ran the Mommy Points site for families who want to travel more for less using miles and points for seven years and now heads up TPG Family when she isn't exploring the world with her own two girls.
You might like
You can now get $50 monthly Uber Cash, Uber Pass subscription with WeWork All Access
News
4h ago
You can earn Shop Your Way points on gas purchases — is it worth it?
News
5h ago
It’s all hands on deck as Delta asks ‘volunteers’ to clean Sky Clubs
News
6h ago
The All-New United Quest℠ Card

Apply Now
More Things to Know
Regular APR
16.49% to 23.49% Variable
Annual Fee
$250
Balance Transfer Fee
Either $5 or 5% of the amount of each transfer, whichever is greater.
Recommended Credit
Excellent, Good