Articles
Summer Hull , aka Mommy Points, ran the Mommy Points site for families who want to travel more for less using miles and points for seven years. She now heads up a variety of special projects at TPG when she isn't exploring the world with her own two girls.
Follow
Sept. 23, 2015
•
7 min read 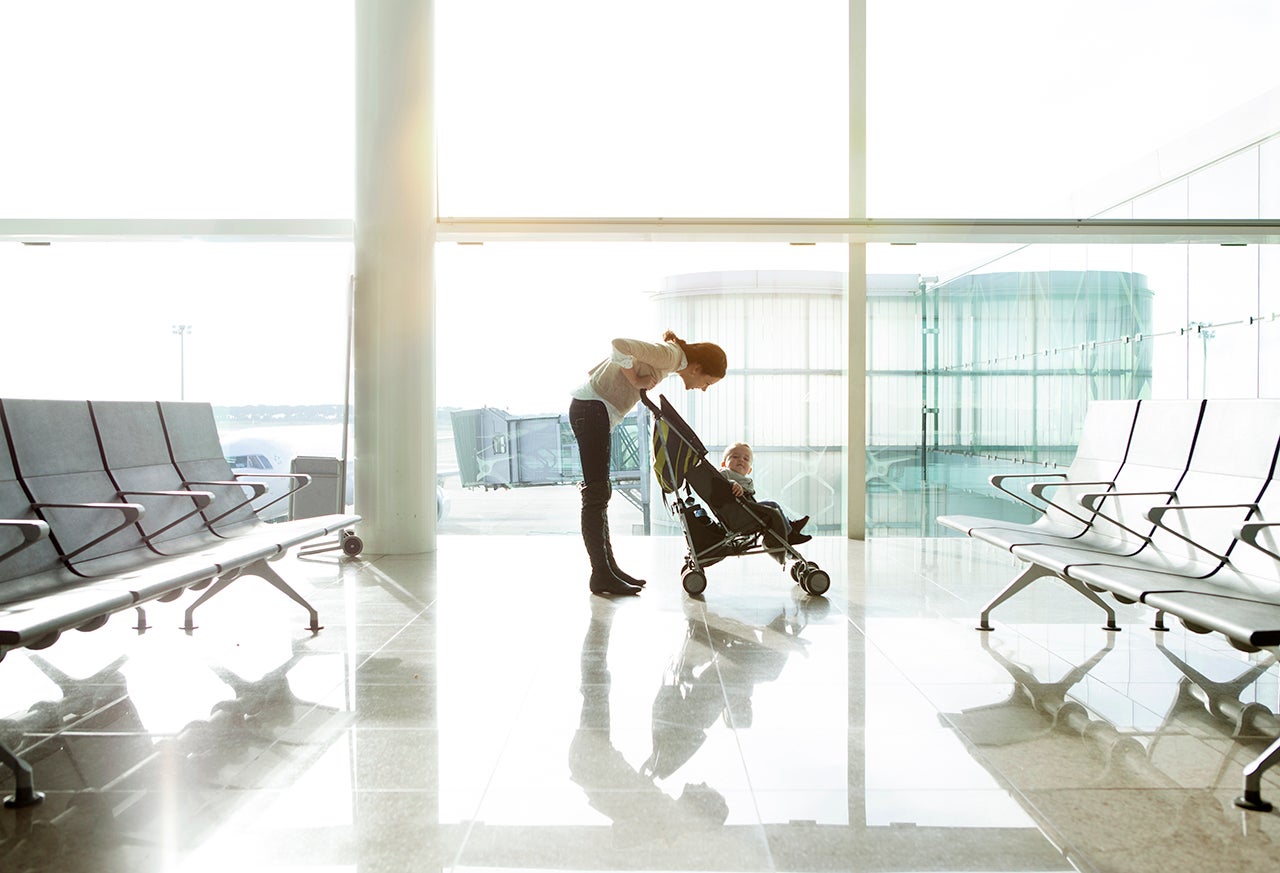 Baby's First Flight: A Trip Report
This post contains references to products from one or more of our advertisers. We may receive compensation when you click on links to those products. Terms apply to the offers listed on this page. For an explanation of our Advertising Policy, visit this page.

At two months old Baby S recently completed her first flights (and international ones at that), and naturally she wanted to write her first trip report about the experience. I told her I would help translate a bit and fill in the holes where she blacked out angelically slept, but this is her story from her point of view. More or less.

About a week ago mom was acting crazy - and I mean even crazier than normal. I wasn't sure what was going on, but she was making lists, piles, and pulling all my stuff out of its rightful place. I thought all the times I called her to come hang out with me in the middle of the night had finally made her snap, but apparently she had something different up her sleeve.

The day after she basically wrecked my entire closet we all piled up in the car with enough bags to set up my room in a different location and went somewhere I had never been before. They called it the airport. I called it big, cold, and kind of weird.

Grandpa dropped us off at the door and then we went in and gave a couple of the bags to these people who put them on a conveyor belt and then they disappeared. Daddy said he simply couldn't carry everybody's stuff one more foot. Well, Dad, maybe you should take that up with mom and my sister. I didn't pack a single thing! Once we were down to the "necessities" (which still looked like a lot of bags to me), we headed to security where this grumpy man fussed at mommy for holding everyone's passports and tickets. I know I look old for my age, but my hand control isn't that great yet, so I think it's great she was holding my stuff for me. Maybe it was just dad that was supposed to have his, I don't know.

Anyway, I stayed in my pouch on mom as we walked through this machine while our stuff went through another conveyor belt to be "checked to be sure it's safe". Even my stroller/car seat contraption had to go through - glad they took me out first!

Once all that drama was finished we headed to "The United Club". I thought there might be secret handshakes or at least special milkshakes at this "club", but it turns out there was just some leftover breakfast food and a room made for families. That family room thing was pretty cool though as I got to meet another 3 month old getting ready to fly and mom got to feed me in a comfy chair while my sister and dad had a snack at the table.

Before long we loaded all our stuff back up (again), stopped to get some lunch for the big people in my crew to bring with us, and then we lined up to board the plane. Let me tell you about this "plane". It is basically a metal tube with wings that flies through the air. I'm not sure how that works since the wings never flap like the birds I've seen, but trust me, it flies. While we were waiting to get on mom walked me around the gate area while in the pouch and I started to get kind of tired. I mean, normally I don't even leave the house, so this was lots of excitement for me!

So, I closed my eyes and apparently slept through things like take-off and for over half the flight. Mom did a good job not moving much at all (other than her constant rocking motion of course) so I was happy to keep snoozing. I also appreciate no one making her remove me from the pouch during the flight, but I have heard that technically during take-off and landing "harness vests" aren't allowed so I won't count on that in the future.

When I did wake up I was kind of hungry, so mom nursed me for waaaay longer than normal. That was awesome! By the time that was all done we were landing and I had my first flight under my belt, er, diaper. Speaking of, they changed me right before and after the flight as they said aircraft changing tables (when they even have them) aren't that great.

I also thought it was cool that after the flight landed that everyone kept coming up to me and telling me what a good baby I was. Well, okay, but how do they know that? I was asleep most of the time! I guess good babies sleep on planes? Weird.

Fast forward through all this time at a resort, on the beach, etc. (mom can tell you about all that), and a few days later were heading back to the airport in Mexico to fly home. This time I wasn't about to sleep through this whole flight experience, even if that is what alleged "good babies" do.

This time I did not want to be in my pouch at all and since mom, my sister, and I had been upgraded (sorry, Dad) we sat at the front of the plane with some extra legroom and Dad ended up all by himself at the back of the plane. This extra space was great since I hear the regional jet seats are pretty small, but since Dad was already in row 21 Mom had to hand me to my sister to hold while she put our bags in the overhead bins. Someone forgot to remind my sister about supporting my head, so that was interesting... I think I heard a few people around me gasp as I flopped around a bit. Don't worry, I was fine, but mom sure got a bit flustered! Maybe we should have Dad stick around until our bags were all settled.

Once all that was done I got another super marathon nursing session! Mom let me snack for about an hour and even though she hoped I'd get tired, I was determined to stay up for this flight. After I was totally full, I got to look around while mom rocked, bounced, and talked to me. When I started to get a little restless I went back to sit with Dad for a little bit to check out the view from the back of the plane. It was pretty cool to take turns with both of them for a little bit to break up the flight.

After the pilot said we were starting our approach into Houston I went back to mom and got to eat some more! Try as I might, I was too tired to stay awake any longer and I missed the last few minutes of the flight.

Since I was asleep anyway, I would have preferred to just keep snoozing, but before long I was being loaded back into the pouch as we got off the plane and headed toward "customs and immigration". Since I'm still waiting for my Global Entry interview (wonder what questions they will ask me?!) we had to wait in a short line. A line?! I was so over it and I decided to let people know it was time to eat, sleep, go home, simply GTFO of there! They weren't listening, so by the time we got in the car I told them VERY CLEARLY I was done.

Hey, even "good babies" have their limits. The flying part though, that was pretty cool, and I look forward to doing it again. I mean, mom and dad were both doing all my favorite things constantly without ever even trying to put me down, so what could be better?!