5 Great Gay Beaches in the USA 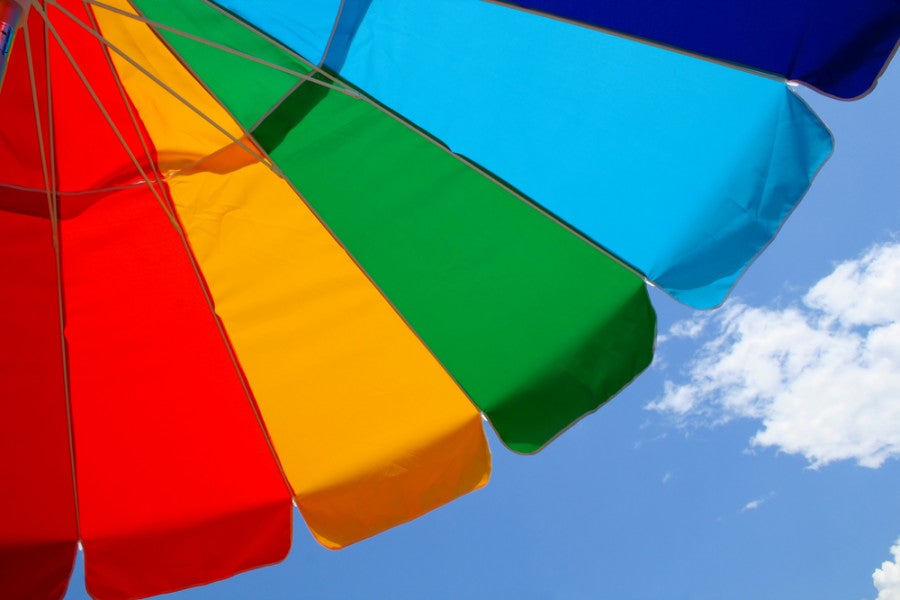 5 Great Gay Beaches in the USA
This post contains references to products from one or more of our advertisers. We may receive compensation when you click on links to those products. Terms apply to the offers listed on this page. For an explanation of our Advertising Policy, visit this page.

Summer is here, and it’s time to hit the beach! TPG Contributor Drew Limsky brushes the Miami sand off his feet to offer the lowdown on the best places to find some rays.

South Beach hotels stake out their own patches of sand with designated chairs and umbrellas, and the local LGBT community can be found at virtually any of them. However, the patch at 12th Street remains the focal point, and the rainbow flags make it easy to spot. There are plentiful concessions, from loungers and umbrellas to shades and beds. There’s always a mix of locals and visitors, but the scene turns friendlier once the New Yorkers stop coming for the winter season. (Sorry, but we all know it’s true. And since I divide my time between New York and Miami Beach, I’m allowed to say that.) Given all the frantic activity on South Beach, it's easy to forget that it's one of the highest-quality urban beaches in America, thanks to the sheer width and length of its white sand and its generally calm, unquestionably gorgeous emerald-to-turquoise waters.

If those rainbow flags on the beach weren’t enough of a marker, the drag shows that spill out from the Palace should tell you that 12th Street is gay central; join the party with juicy burgers and tropical drink specials. Having lived here for the last two years, I always appreciate South Beach’s accessibility to Miami International Airport (MIA); it's just a 12-mile ride that typically takes 20 to 40 minutes, depending on traffic. See this review of Marriott's Blue Moon Hotel, this list of Miami's best-value Starwood hotels and this list of Miami's hottest hotel openings from last year's Art Basel.

With the tongue-in-cheek nickname of “Ginger Rogers State Beach,” this wide, sandy strand is where to find L.A.'s sun-seeking gays. Head north from downtown Santa Monica on Pacific Coast Highway past the volleyball courts, and park in one of the beachside lots. This is an urban beach, but with the long row of palm trees set on scenic cliffs behind the freeway, and the great bike paths that cut across the sand, it’s easy to forget that. I’ve also always found it really friendly and social.

Across from the sand and a block south of Channel Road, the Santa Monica outpost of Marix (the original is in West Hollywood) makes a mean margarita in a rustic, laid-back space ideal for flip-flops and still-wet beach hair. About a mile away at the Santa Monica Place Mall, the rooftop Sonoma Wine Garden is a winner for its organic produce (great kale salads), ocean views, lounging deck and adorable staff. The closest airport to Santa Monica is Los Angeles International Airport (LAX), about a half-hour away. For a fun nearby side trip with a few cool gay bars, see Destination - Venice Beach.

Who knew that Bruce Springsteen’s old haunt would turn out to be a gay summer destination? It took considerable commitment and vision to gentrify this formerly decrepit beach town full of Victorian houses, but now fans tout Asbury Park’s rehabilitation, its diversity and its strong sense of gay community. The focal point of the beach is the 1920s boardwalk, lined with ornate Beaux Arts buildings, as well as restaurants, shops and famous music venues Wonder Bar and The Stone Pony. LGBT folks can be found anywhere on the sand, but with an especially strong presence at the beach at 5th Avenue.

The social scene is especially vibrant around the Empress Hotel, with its Paradise Nightclub and Tabu restaurant, where the Bloody Marys and mimosas flow all day. Asbury Park is about an hour’s drive from Manhattan; it’s also about an hour from Newark International Airport (EWR) via the Garden State Parkway. Taking the train from Manhattan's Penn Station takes approximately two hours; take the Northeast Corridor toward Trenton Transit Center, then switch at Newark Penn Station to the North Jersey Coast Line toward Bay Head and take it to Asbury Park.

Fittingly, the word "Rehoboth" means "a place for all." When I lived in Washington, DC, this was the place to head for the summer, but I was even more charmed by its long boardwalk, gentle dunes, breeze-blown beach grass and lack of sales tax when I visited just last summer. The gay-owned businesses and public parties (advertised with colorful flyers) are spread about this pretty summer town, but two beaches are heavily gay. Just south of the boardwalk at Prospect Street, there's Poodle Beach for the guys (eye roll for the name, but hat tip to drag volleyball over Labor Day weekend) and at the north end of the Boardwalk, there's quieter North Shores for the dames. Both beaches have wide, pale sand and lots of eye candy.

Open seven days a week and for Sunday brunch, Blue Moon, is a local institution that's set in a Victorian house, featuring steaks, chops, a killer cheese plate and pan-seared Jersey diver scallops. Open seven nights a week for dinner and for Sunday brunch, Big Sissies Bar & Grill is known for its hopping happy hour, held every day from 3-8 pm. Work up an appetite during the two-hour drive from Philadelphia International Airport (PHL). Atlantic City (ACY) is technically 58 miles away, but the trip takes two and a half hours because part of it is via the relaxing Cape May-Lewes Ferry. If you'd prefer to take the train to Wilmington and rent a car from there, be sure to see TPG's review of riding Amtrak's Acela First Class.

Just south of Wailea and accessible from Big Beach via a short but rocky climb, Maui's Little Beach offers one of the world’s great coastal experiences. It’s still 1968 here; every Sunday, there’s drumming, dancing, nudity and makeshift costumes and tents. The crowd accepts everyone, which is why gays have always felt welcome, and it will feel comfortable for the open-minded of every stripe. This tiny cove is backed by a terraced cliff with wild brambles, adding to the untamed beauty of the atmosphere.

The fish tacos and shave ice from Jawz taco truck in the Big Beach parking lot are good enough to draw long lines. Kahului Airport (OGG) is only about 20 miles away, but since the route winds through major resort areas, try to be patient with tourist drivers marveling at the landscaping. Check out TPG's review of the Andaz Maui at Wailea, and be sure to travel with aloha.