Flying in Coach After Three Years Up Front

Articles
Summer Hull , aka Mommy Points, ran the Mommy Points site for families who want to travel more for less using miles and points for seven years. She now heads up a variety of special projects at TPG when she isn't exploring the world with her own two girls.
Follow
March 26, 2015
•
8 min read 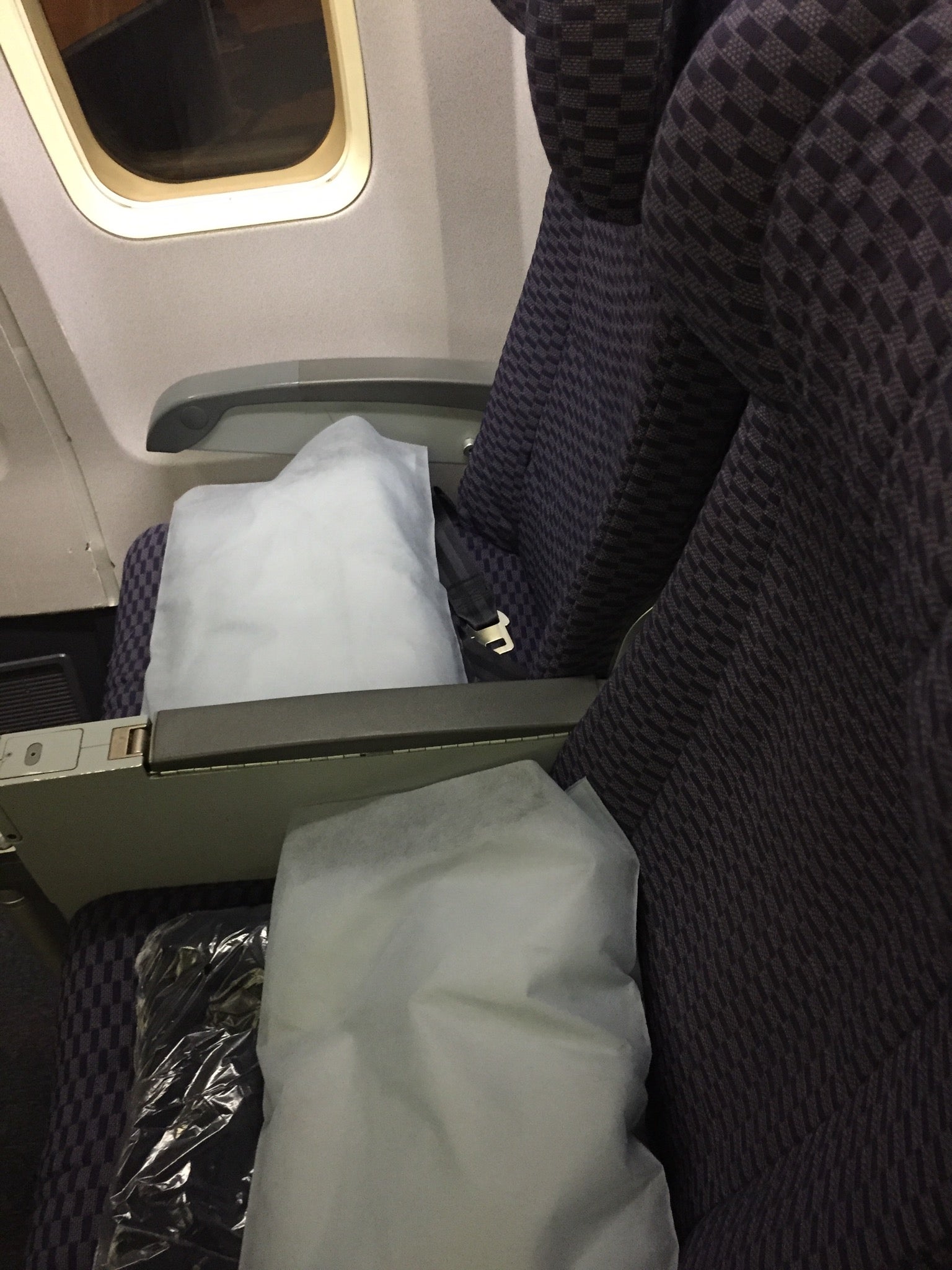 Flying in Coach After Three Years Up Front
This post contains references to products from one or more of our advertisers. We may receive compensation when you click on links to those products. Terms apply to the offers listed on this page. For an explanation of our Advertising Policy, visit this page.

I have to acknowledge up-front that I feel totally silly and petty writing about the merits and drawbacks of my recent economy flights to Spain given the devastating events of Germanwings Flight 9525 that left Barcelona the same morning we did. I'm writing about our flights as I normally would, because this is what I do, and fixating on the Germanwings Flight doesn't seem appropriate either given that I have virtually nothing to add to that discussion other than my own shock and heartbreak for the families.

For the last couple of years I have had the luxury of doing all of my long haul travel in a premium cabin. Of course, I still have flown in coach plenty domestically and on shorter international routes, but if we were going to be flying on a TransAtlantic or TransPacific flight, I have had the luxury of doing it in business or first class thanks to using miles, upgrade certificates, etc. My last flight to Europe in economy was on a Lufthansa operated flight from LAX to Frankfurt on Star MegaDo 4 in 2012, and I ended up so tired that I booked a whole new ticket using United miles at the last minute to fly back to the US in Lufthansa First Class just so I could sleep instead of sitting upright for another 12 hours in coach.

In the three years since that trip, I have firmly equated flying coach on long-haul international flights to total and utter exhaustion. As a parent of a young kid, I was often teetering on exhaustion anyway, and never have the luxury of zonking out on the couch for a day or two when I return home. I have had the miles and upgrades to make long-haul flying more comfortable, and it has been great.

When the Numbers Don't Add Up to Sitting in a Premium Cabin:

However, there comes a time when if you travel regularly enough, the math just doesn't work out to fly up front. I mean, maybe that's not the case if you are dealing with virtually unlimited budgets of cash and/or miles, but for most of us operating in the real world, there are limits to what is realistic and smart.

I hit that limit in October of last year when some United fares popped up for around $600/each to fly round trip from Houston to Spain. I immediately thought of taking my retired former Spanish teacher mom to Spain for a Christmas present when I saw the fares, and at those prices it was virtually impossible to justify instead spending 100,000+ miles round trip each to fly in business. If I did that, it would essentially be like getting .6 cents return for my miles, albeit in a much more comfortable seat. No matter how you played with the numbers, it just made more sense to suck it up and sit in the back.

The $600 fares booked into a fare class that was not eligible for using United Global Premier Upgrade certificates, so there was not going to be a "free" route to upgrade us to business class. I decided I was okay with that, though totally expected in the end to hate the flying experience and vow not to do it again in economy on a similar flight for quite a long time. I looked at it as a bit of an experiment to see how much I hated it after three years of being spoiled upfront. If I'm being totally honest, when I found out a few weeks after booking the tickets that I was pregnant, and would be almost six months pregnant at the time of the trip, I had a moment of weakness and put in to have the three of us upgraded on the outbound overnight fight using a combo of cash and miles. That was not economically sound redemption, but it represents how badly I did not want the exhaustion that I associated with flying in economy. It is not at all about wanting to be pampered, or the food, or free drinks, or lounge access, or being "too good" for coach, or anything like that. It is a total aversion to avoidable exhaustion. Those upgrade (thankfully) never cleared, though I still don't have the miles/money back from United....story for another day.

We were left with the original plan of flying to Europe and back in economy...almost six months pregnant and with a five-year-old. It really looks a bit like a bad idea on paper, but we pressed on anyway.

Making the Most of Sitting in Coach:

I followed my own advice outlined here of how to have my kiddo have a successful flight to Europe, and it pretty much worked flawlessly. She sat between my mom and me and stretched out with her head on one of us and her feet on the other for much of the overnight flight. She slept in that position a little worse than she would have probably slept in her own lie-flat seat, but not by too much.

My own experience on the outbound flight was not fun. Sleeping while sitting upright with a kid laying on you isn't going to be comfortable in good circumstances, but doing it with a pretty large and uncomfortable pregnant belly was really not fun. I didn't sleep much on that overnight flight at all, but the upside was that since we connected in Newark, the flight to Madrid was only around six hours long anyway. Had I slept in a business class seat, I still would have at best maybe 4.5 - 5 hours of sleep and would have been tired either way.

On the way home, the flight was a daytime flight and my kiddo slept for maybe 45 minutes of the 9+ hours of flying back to Newark, which means that was all I was able to sleep, too. However, even when she flew back from Paris last year in a lie-flat business class seat, she didn't sleep much on the daytime flight then either. Of course laying down would have been more comfortable for me than sitting up on that leg of the journey, but sitting in coach really didn't result in significantly less rest that we probably would have gotten up-front.

Coach Was Not Fun, But Not Horrible:

The food in the back was pretty bad. The drink service was less frequent than in first. The line for the restroom was a little longer. The cabin was brighter due to more people leaving their shades up. The overnight flight specifically was not fun, especially with a pregnant belly. However, it wasn't horrible. It wasn't this energy sucking force that I had built it up to be in my mind. Yes, I was tired after landing in Europe, but it wasn't that bad given our route.

Before I start trumpeting economy, let me clarify a few things. First, I think knowing the people you are sitting next to helps tremendously. If you have a row just for your family (or yourself on a relatively empty flight), it isn't that bad. My last overnight coach experience to Europe had included sitting next to a stranger who snored, smelled bad, and kept leaning his head on me. This experience was much better than that basically sleepless night.

Second, we were in Economy Plus seats, so we had more legroom than if we were in the true back of the plane. We are only talking a few extra inches, but they really helped us wiggle into a few stretched out positions that wouldn't have worked otherwise.

Finally, and perhaps most importantly, our routing wasn't really that long. Flying from the East Coast to Western Europe isn't a short flight, but it isn't terribly long either. I would not have been as happy with our seats if I had to stay in them for many more hours. I think that if you are going to fly to Europe in economy, there is something to be said for connecting on the East Coast to shorten up the duration of sitting in your seat.

I still have absolutely no desire to fly somewhere like Australia in economy, but I'm happy that I'm not so far gone being spoiled up front that I can't handle a relatively short flight to Europe.