Staring at a Departure Board Trying to Get Home

Articles
Summer Hull , aka Mommy Points, ran the Mommy Points site for families who want to travel more for less using miles and points for seven years. She now heads up a variety of special projects at TPG when she isn't exploring the world with her own two girls.
Follow
Feb. 27, 2015
•
8 min read 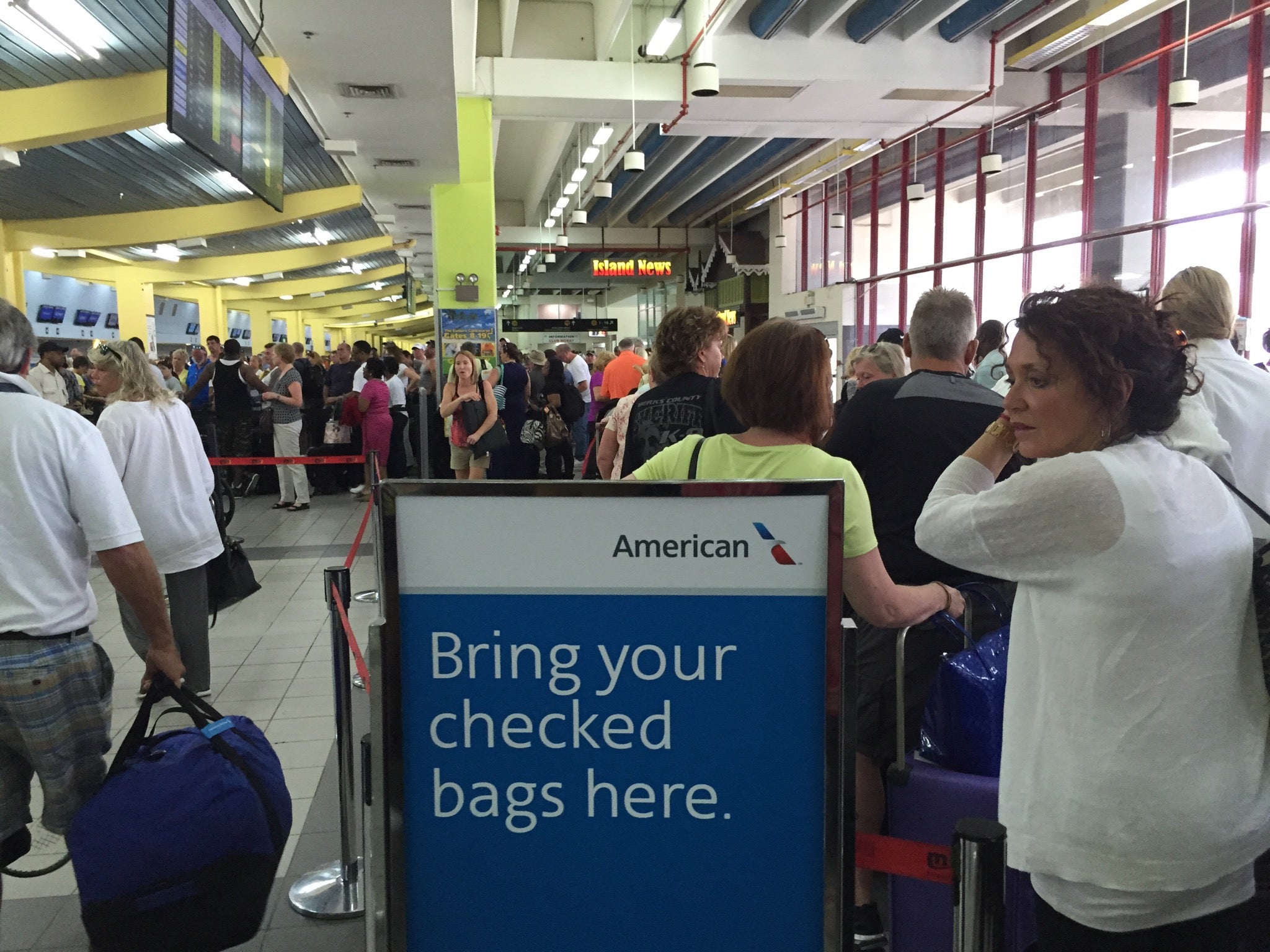 Staring at a Departure Board Trying to Get Home
This post contains references to products from one or more of our advertisers. We may receive compensation when you click on links to those products. Terms apply to the offers listed on this page. For an explanation of our Advertising Policy, visit this page.

This week we joined a few friends to celebrate their 25th wedding anniversary in Jamaica. It is a special treat to be able to experience different places with friends, so we jumped at the chance to join them. We stayed two nights at a small hotel in Negril, and then two nights at the brand new Hyatt all-inclusive in Montego Bay - sneak peek here!

However, this post isn't about Jamaica exactly, it is about trying to get out of Jamaica. We flew to Jamaica on an ANA award ticket for 22,000 ANA miles round trip that we had transferred 1:1 from Amex Membership Rewards. ANA is a Japan based airline in the Star Alliance. This was a much better deal than the 35,000 miles United would have wanted for the exact same flights.

We booked the award on a mix of United and Copa operated flights, and everything seemed good to go. We had a ticket number, the reservation appeared on United.com, we selected our seats on the United operated flights online, and we even got upgraded on the outbound flight by virtue of our elite status with United. In fact, we could see online we had been upgraded on the United operated return segment from Panama City - Houston, though we never were able to fly that segment. We weren't able to check in for the return flights online 24 hours out as they had a Copa segment, and the message said we had to check-in at the airport.

So, we got to the airport in Montego Bay on Wednesday morning about 2.5 hours early to start the journey home to our kiddo, who we missed very much by this point. The Copa check-in desk could see our reservation, but could not check us in as they said it hadn't been "synched" or it "hadn't been fully sent over" by ANA. I can't even pretend to fully understand what this means, but I have heard of awards on partners that aren't fully ticketed.

We had time, so we tried to call ANA to get them to fix the problem. Of course, we were in Jamaica and using my phone wasn't free. Thankfully, the agents at the airport were nice enough to give us a phone to use, but all the numbers I could find for ANA didn't work from either my phone or the airport phone we were given. We tried country codes, just dialing like we normally would, etc. and all we would get was a fast beeping sound. Oh, and did I mention the airport didn't have WiFi?

So, I did what any increasingly desperate pregnant lady would do, and I texted a frequently traveling friend who I knew could help as good as anyone. I pleaded for him to try the ANA number from the US to see if it would work. About 30-40 minutes later on hold, he got through to someone.

The process was slow, and eventually, maybe 90 minutes into the ordeal, ANA told my rock star friend that the issue had been fixed and we could check-in. We were given new ticket numbers and told to go to the Copa desk. However, those ticket numbers didn't work either, and the same problem we were having before persisted. At this point, we even offered to just buy the Copa segment outright from Montego Bay to Panama City if we could be assured we were protected on the Panama City - Houston United operated segment, but the United desk (right next to the Copa desk) said that segment wasn't properly showing in their system either....which seems crazy to me given the upgrade processed, we had seats, and flew the outbound with no issues.

Time was now up anyway, and the flight left without us. We had to get a new way home.

My friend, still on with ANA, helped try to get us re-booked on the only other viable Star Alliance option left to get home that day, Montego Bay - Newark - Houston on United. After another good while (30 - 40 minutes?) we were told we were re-booked on United.

So, we headed to the United desk (who we were good friends with by this point) to find out that only one of us had actually been re-booked (me), and my husband had not been. Plus, I had been re-booked with an overnight in Newark that I didn't particularly want, and there was weather in the New York area to boot. There were no more minutes to spare to try again with ANA to get it fixed a third time to try to get my husband on the flights, so we got all the documentation that could be printed from the airlines at the airport, and headed off to our last shot home for the day.

With the help of my friend who we owed tremendously by this point, we booked new tickets on miles on American Airlines to get home via Miami. He's an Executive Platinum with American, so the close-in booking fees were waived, but it still cost $100 something in taxes plus 17,500 miles each to get home. I could have used my American miles and paid the close-in fees, but as it stands we'll just work out how to repay him. It pays to have good friends with the same hobbies as you.

We spent about four hours total at the check-in counter in Jamaica, our friend spent a couple hours on the phone with ANA, I used way more data on my phone than I had planned, we got home much later than intended, and had to buy brand new tickets to do so. We also ended up in very small American economy seats instead of first class seats we had been upgraded to on United - though I was so glad just to be going home that it hardly mattered.

Literally at one point I was staring at the departures board trying to figure the best way to get home that day without going broke.

So, what went wrong? And, what do we do next?

Truthfully, I don't really know. We had a ticket number (ie not just a reservation confirmation number from the issuing airline). Our reservation showed just fine on United's website. The outbound worked just fine. I don't know how or why things went astray on the return, which was on the same reservation. Maybe someone smarter than me will have a good idea. My guess is something with the Copa segment caused the issue, but even United said the return segment on their flight wasn't showing correctly.

We did the right thing by having buffer time at the airport on the return, though even 2.5 hours wasn't enough.

We did the right thing by trying to quickly hop on the phone with this issuing airline, and ultimately having someone in the US do it for us. However, the issuing airline couldn't help, at least not in time.

We did the right thing by coming up with alternative ways to get home both within the same alliance via the issuing airline, and then ultimately on our own when it was clear that was the only way we were getting home that day.

However, doing the right things sometimes still leaves you a bit screwed. I have submitted a complaint and all the supporting info to ANA, but I don't know that we will recoup what it cost to get home. We were sure to use miles to get home instead of spending $1,000 on new tickets because I was not confident we would ever get that back. Losing an extra $100 + 35,000 miles to get home will be unpleasant if it comes to that, but it won't sting as much as the $1,000+ on last minute tickets would have hurt.

I want to learn lessons from this, but it's hard to find what they are as there wasn't an obvious problem. I did use lessons from the past in being proactive in finding alternate flights that would work, and ultimately we made the decision in time to just start from scratch with new tickets on a new carrier so we could still get home that day and not incur another night's worth of expenses in Jamaica. Had we waited longer to make that call, we would not have gotten home that day.

Things can get more complicated when you are dealing with one issuing airline and a different operating airline. Normally things go fine, but every so often you may hit a problem like we did. I wish ANA had been able to fix the issue in time for us to make the flight, but they didn't.

In the end we still got home safely, albeit with a nice heaping dose of extra stress, and the expense of 35,000 additional miles.

I'll keep you posted if/when I hear back from ANA, as I really want to know what went wrong, and ultimately what they can do to help make it right.

I'm also clearly indebted to our friend who served as our emergency travel agent when we were stuck with limited means of communication at the Jamaican airport!

Have you ever encountered a similar issue, and what did you do to correct the problem?