Most Intimate Small-Ship Cruises for 2015 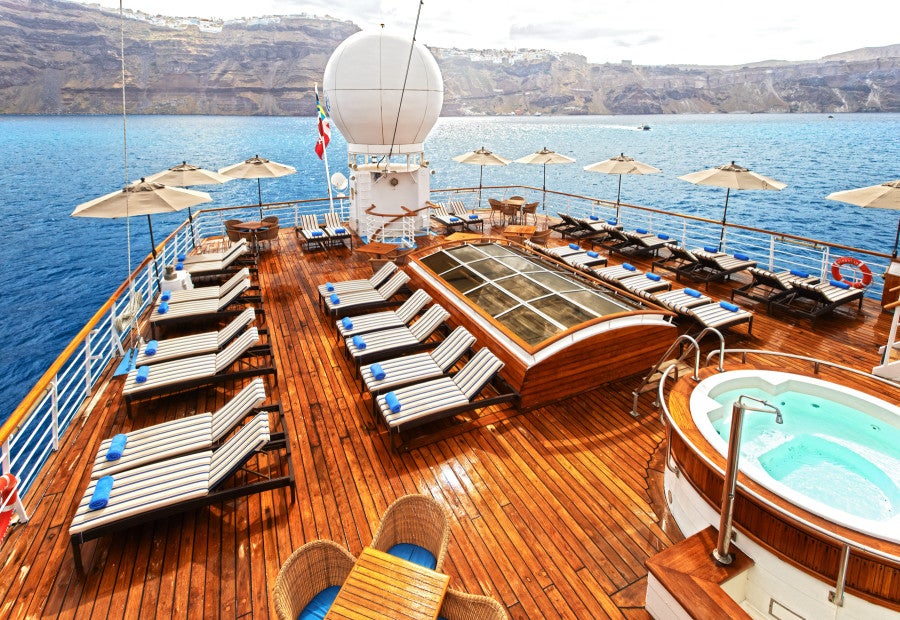 Most Intimate Small-Ship Cruises for 2015
This post contains references to products from one or more of our advertisers. We may receive compensation when you click on links to those products. Terms apply to the offers listed on this page. For an explanation of our Advertising Policy, visit this page.

Bigger is better seems to be the mantra that dominates cruise news: simulated skydiving tunnels, robot bartenders, observation globes that dangle precipitously over the side of the ship. That’s fun, sure, but when intimacy is what you’re after, these mega-boats can feel a little… busy. If you like to cruise but want something on a small scale, there’s a whole roster of cozy luxury vessels sailing everywhere from the Amazon to Zanzibar. TPG Contributor Adam Erace tells you what’s big in small ships in 2015.

Seabourn. With itineraries to all seven continents, Seabourn’s Sojourn, Odyssey and Quest will hit 25 destinations in late 2015/early 2016 that are either maiden calls or ports the line has not visited in years: Myanmar, Vanatua, Borneo, Nova Scotia, Samoa, Uruguay and more. Something to keep your eye for the future: Encore, the first of two new luxurious ships in the works, launches next year with three restaurants, balconies in every suite, the new “Seaborn Square” social hub, and interiors by Adam D. Tihany.

Windstar. Windstar welcomes two new 212-passenger yachts in May, the Star Breeze and Star Legend, following a $17-million renovation for each. They’ll sail fan-fave routes, Nice to Rome and Rome to Barcelona, respectively. New Windstar itineraries for 2015 include Tahiti’s Tuamotu and Society Islands, Montserrat (which hasn’t seen cruises since a volcano decimated the Caribbean island in 1995), Portugal paired with France or Spain and an Iceland-to-Denmark cruise along the Norwegian coast that’s going to be a summer jaw-dropper.

Variety. Specializing in small, tricky and off-the-beaten-path ports, Variety has been sailing its flotilla of self-owned yachts since 1949. (These are kind of boats that don’t have swimming pools—because passengers usually just dive off for a swim.) New for 2015 include itineraries bumming around the Canaries and Aegean Sea, but more interesting is the new 10-day Madagascar cruise in July and August. The 21-cabin Pegasus skips back and forth between the mainland Madagascar and Mozambique Channel islands off the northwest coast, bringing passengers into contact with local fishing communities, endangered sea turtles, coffee plantations, three species of lemur, coral reefs, the world’s only cave-dwelling crocodile and a lighthouse designed by Gustav Eiffel.

Silversea. You’ve heard of all-inclusive, but what about ultra-inclusive. That’s what Silversea is billing their new-in-2015 cruising style. On 52 Mediterranean cruises this year, two hours of WiFi per guest, per day is included—it’s unlimited for passengers in Medallion-category suites and higher—and each port features at least one complimentary shore excursion. Think tours of the Cairo and the pyramids, archaeological explorations in Sardinia, sunset wine tastings in Dubrovnik and more. Booking a Galapagos cruise this year? If you sail Silversea, it will be on the elegant 100-passenger Silver Galapagos, which just completed a second phase of renovations last September.

SeaDream. “It’s yachting, not cruising” is the motto of the Norwegian-based SeaDream I and SeaDream II, a pair of twin mega-yachts sailing since 2001. In 2014, the company debuted signature Wine Voyages, which they’re doubling down on this year with eight new itineraries through Italy, Spain, Croatia, Monaco and France. The trips are packed with wine events onboard and in port, from vineyard visits to tastings led by experts that sail with you.

Star Clippers. Spread off the Spanish coast like fragments of a shattered shell, the Balearics include islands both well charted (Mallorca, Ibiza) and less explored (Menorca, Formentera). A new Balearic Islands summer itinerary from Star Clippers visits each on the four-mast, 16-sail, 170-passenger Star Flyer. Visit ruins and ancient monasteries, graze at beachside seafood shacks, dance all night and splash in sheltered Mediterranean coves. As a bonus, this cruise also docks on mainland Spain, with a day to explore the gorgeous city of Valencia.

Pearl Sea Cruises. This new line debuted last year with itineraries through New England, Canada and the Great Lakes on its 200-passenger Pearl Mist, which is spending winter 2015 in the Caribbean. The cruises appear to be sold out until May and beyond, but keep your eye on the 14-day American Origins itinerary, an October repositioner that lets you leaf-peep in New England before heading south along the coast to warmer climes: Williamsburg, Charleston, Savannah, St. Augustine, West Palm Beach and finally, the Bahamas.

Many larger cruise lines offer co-branded credit cards, but that’s definitely not the case with these boutique boats. If you want to use points, your best bet is to find a card whose points you can redeem for statement credits against any travel-category purchase like car rentals, flights and yes, cruises. The Capital One Venture Rewards Credit Card and Barclaycard Arrival Plus World Elite Mastercard (currently offering a 60,000-mile sign-up bonus after $5,000 spent within the first 90 days) are two examples.

If you’re spending enough on these cards, you can package your airfare with the cruise for statement credit, but redeeming miles typically offers a much better value. For airfare to Europe, for example, consider the US Airways Premier World MasterCard, which has just upped its bonus to 50,000 miles after first purchase; as US Airways begins to merge with American Airlines, current cardholders are being automatically converted to the AAdvantage Aviator Silver and Red cards. Off-peak economy flights to many cities like Lisbon, Brussels and Munich go for as little at 30,000 miles round-trip.

Planning to sail off into the sunset on a small-ship cruise this year? We'd love to know where you're going![card card-name='The Platinum Card® from American Express' card-id='22504813' type='javascript' bullet-id='1']

Our points-obsessed staff uses a plethora of credit cards on a daily basis. If anyone on our team wouldn’t recommend it to a friend or a family member, we wouldn’t recommend it on The Points Guy either. Our opinions are our own, and have not been reviewed, approved, or endorsed by our advertising partners.
See all best card offers
Related stories
News
Chase's newest Ink card is now available to the public
News
Should you buy Marriott points with a 50% bonus?
Guide
5 secrets to getting a luxury cruise for less
Deals
Deal alert: Widespread Air Tahiti business class award space to French Polynesia