Introduction to a Trip Around the World on Points

One of our biggest trips of 2014 was to go literally around the world for my husband’s 40th birthday.  It was a big trip in every sense of the word, and it was a pretty epic adventure for the two of us.  So epic I haven’t yet tackled the task of writing about it even though it happened many months ago, and I have written tons of trip reports for adventures that happened after that one.  However, with two of the hotels we stayed at on the trip on the verge of increasing in category via the Hyatt Gold Passport annual category reorganization, it’s time to try and tackle putting words around this epic trip.

I’m clearly not Ben from One Mile at a Time, so don’t expect a full detailed report on every one of our flights around the world as we took full advantage of our mostly lie-flat business class seats….by sleeping.  We didn’t take this trip with the primary goal of reviewing different business class flights, we took it to celebrate a huge milestone together.  However, I am happy to share some of the more memorable aspects of the flights, or at least for the ones where I was still awake.

Perhaps even more importantly, I’ll share some of the things we did on our main stops in Amsterdam and in The Maldives, and of course have reviews of both of those hotels, as well as the hotel in Singapore.

Using United Miles to Get to the Maldives:

I wrote a detailed post about the planning of our trip, but in summary we used 120,000 United miles each (pre-2014 devaluation) to fly the the route listed below.  We routed to Male via Europe and back home via Asia.  I have read that sort of routing is harder to pull off with United these days, but it may still be possible.  That same business class ticket now to the Maldives (priced as Central Asia) using Star Alliance partners would cost 160,000 United miles.

When booking the trip we searched for award availability segment by segment instead of just putting in Houston – Male – Houston in order to find the flights we wanted at the stopover points we were after.  This means we had to call United and feed them the segments we wanted as we could not get the itinerary we wanted to price online.  We also had to book a few segments in economy at first and then move up to business as we saw availability open up.  We had waited listed our last segment from LAX – Houston in domestic first, but that one never cleared.  The rest of the segments were in business class, which was often the highest class of service on the flights we were on.

This hotel is currently a Category 5 for 20,000 Hyatt Gold Passport points per night, but it will be going to a Category 6 at 25,000 points per night effective January 22nd.  We actually booked the stay on a paid rate so we could use a confirmed Diamond Suite Upgrade as we were hosting a few people for a birthday gathering in Amsterdam.  We tried to switch to a points + cash rate once those were introduced, but it never worked out.

Stay tuned for a full review, but we loved this hotel and would absolutely stay here again on a stay in Amsterdam.

The main attraction on the trip was a stay at the Park Hyatt Malidves, Hadahaa.  This hotel is on its own private island with white sand beaches, amazing crystal-clear blue waters, and all of the rooms are not really rooms, but they are their own villa.  This is the type of destination that you see in movies, but don’t think you will ever actually get to visit.  Without points we would have never been around the world in business class seats, much less get to stay on our own private island in the middle of the Indian Ocean. 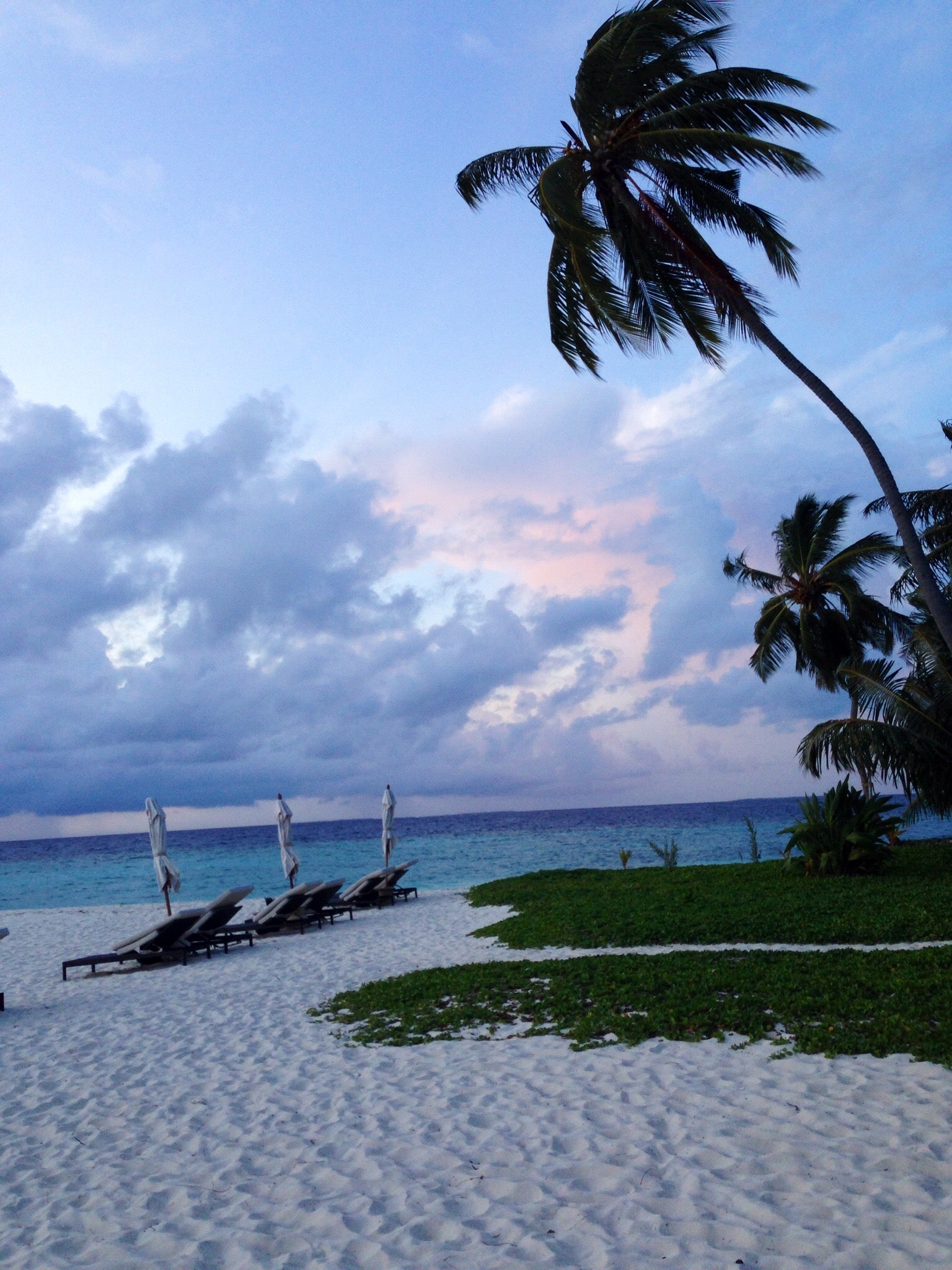 Before heading on the trip, we paid extra secured an over-water villa to celebrate Josh’s birthday in an amazing way, but once we got there we actually found that wasn’t our favorite type of villa, at least for the time of year we were there.  In the end we stayed at the standard Park Villa, the Beach Villa with private pool, and the Over Water Villa.  I will share the pros and cons of all of those villa types in my post on the resort, as well as suggestions on when to visit, and how to have a great time without spending more than necessary (though The Maldives is never going to be a super cheap destination, even on points).

We had plans to head into Singapore for the day on the way home, eat at hawker stations, and see some of the major sights during our one-day layover, but that didn’t pan out to be possible as we were pretty beat by this point in the journey.  Instead, we ended up booking a day room on arrival at the Crowne Plaza Changi Airport and we passed out.  I’m sad we missed actually seeing Singapore on this trip, but we made the right call for our situation at the time.  The airport hotel was very convenient and quite nice, so I’ll share some details and tips in case you find yourself in a similar situation at Changi in the future.

While I may change this up a little as we go, I think I’m going to break the trip report into the following parts:

Introduction to a Trip Around the World (this post)

Highlights from Business Class Flights Around the World

Highlights from Two Days in Amsterdam

Food and Activities at Park Hyatt Maldives on a Budget

If there is something else you know you have lots of questions on let me know and I’ll do my best to include that info in the series.  This was a really special and unique trip for the two of us, and one we never thought would have been possible until we learned about the amazing opportunities that miles and points can present.  I don’t see us repeating a trip like this in any near future, so I’m looking forward to reliving it by sharing it with all of you!

Summer Hull aka Mommy Points, ran the Mommy Points site for families who want to travel more for less using miles and points for seven years and now heads up TPG Family when she isn't exploring the world with her own two girls.
You might like
Sweet Spot Sunday: Fly from Florida to Montana and everywhere in-between for 7,500 LifeMiles
News
1h ago
No-annual-fee card that earns United miles: United Gateway Card review
Reviews
Yesterday
How I’m getting a free Disney World trip using credit card perks and points
News
Yesterday
Chase Sapphire Preferred® Card