Finding award availability at the Park Hyatt New York proved to be very challenging as the award space was basically temporarily eliminated for a period of time while the hotel was still working to complete rooms.  There are not very many standard Park King rooms in the 210 total rooms the hotel has available over 15 guest floors, but award availability for the Park King rooms that they do have has improved in recent months.  The nightly price for the Park Hyatt New York starts at around $600 for low season dates, and it is a top tier Category 7 Hyatt that goes for 30,000 points per night (one of only two Cat 7’s in North America).

The hotel is located on West 57th Street and it is hard to miss as there are very, very bright white lights on the sidewalk over the entrance.  There are also typically at least two very friendly doormen working at the entrance to greet you.  When One Mile at a Time stayed at this property right after they opened a service standout for him were the doormen, and now having stayed there myself, I absolutely agree.  This is an element of the hotel that they got 100% correct.

After being greeted by the doormen, our bags were taken by some of the ladies working in the lobby with iPads.  Our bags would be delivered to the room later, and in the meantime we were escorted to our room to finish the check-in process much like was the procedure at Park Hyatt Tokyo.  Since I was traveling with a very tired kid, I was totally fine with getting to the room ASAP. 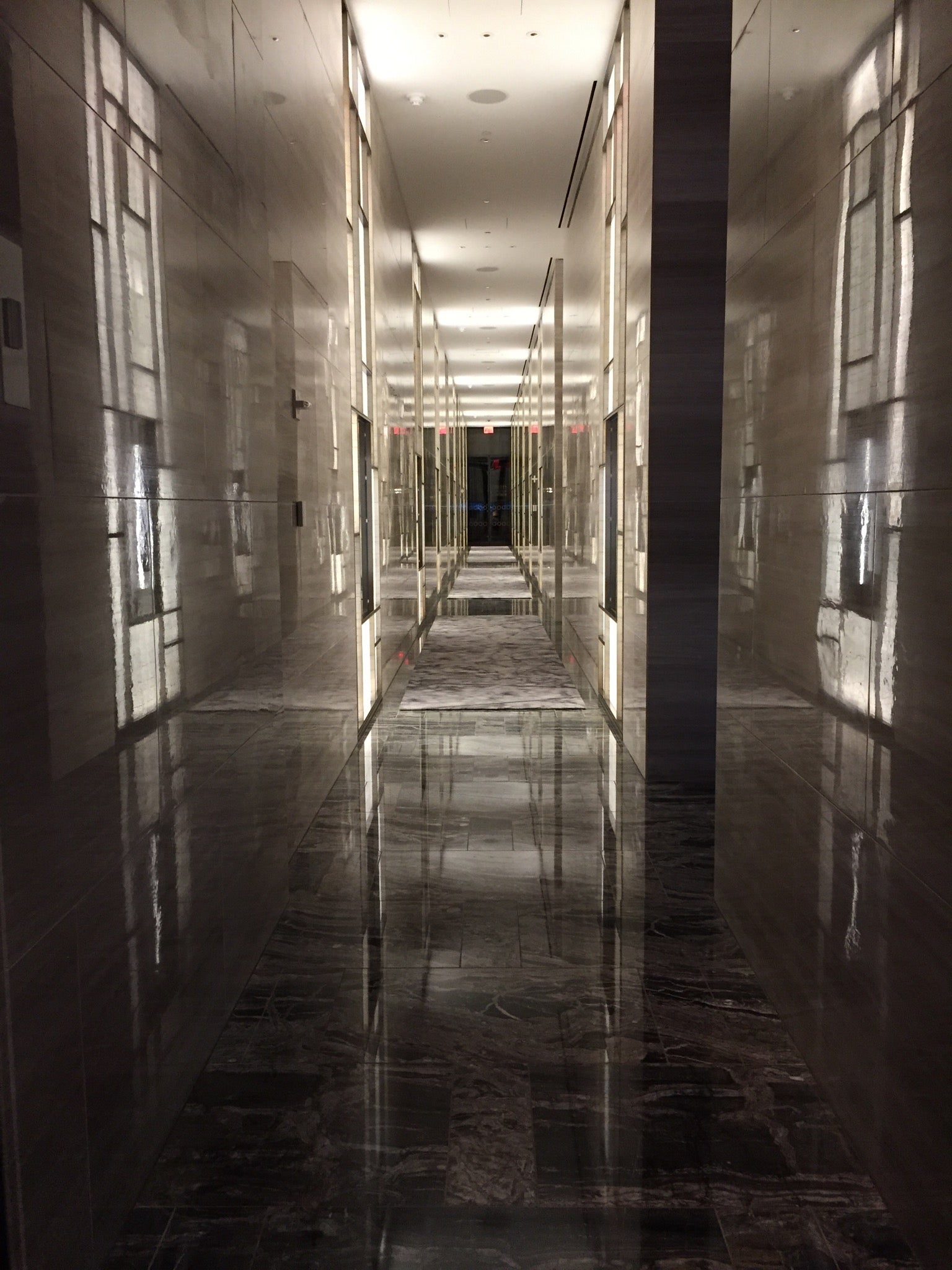 Once we reached the room, we were given an orientation to the layout and amenities and informed we were upgraded as Diamond members from the Park King to the Park Deluxe King.  Based on a review of the room types on their website, I don’t think there is a major difference between the two room types and I expect this to be a common ‘upgrade’ for Hyatt Gold Passport elite members.  Based on reports and my own experience, I would not expect regular complimentary upgrades beyond that room type. 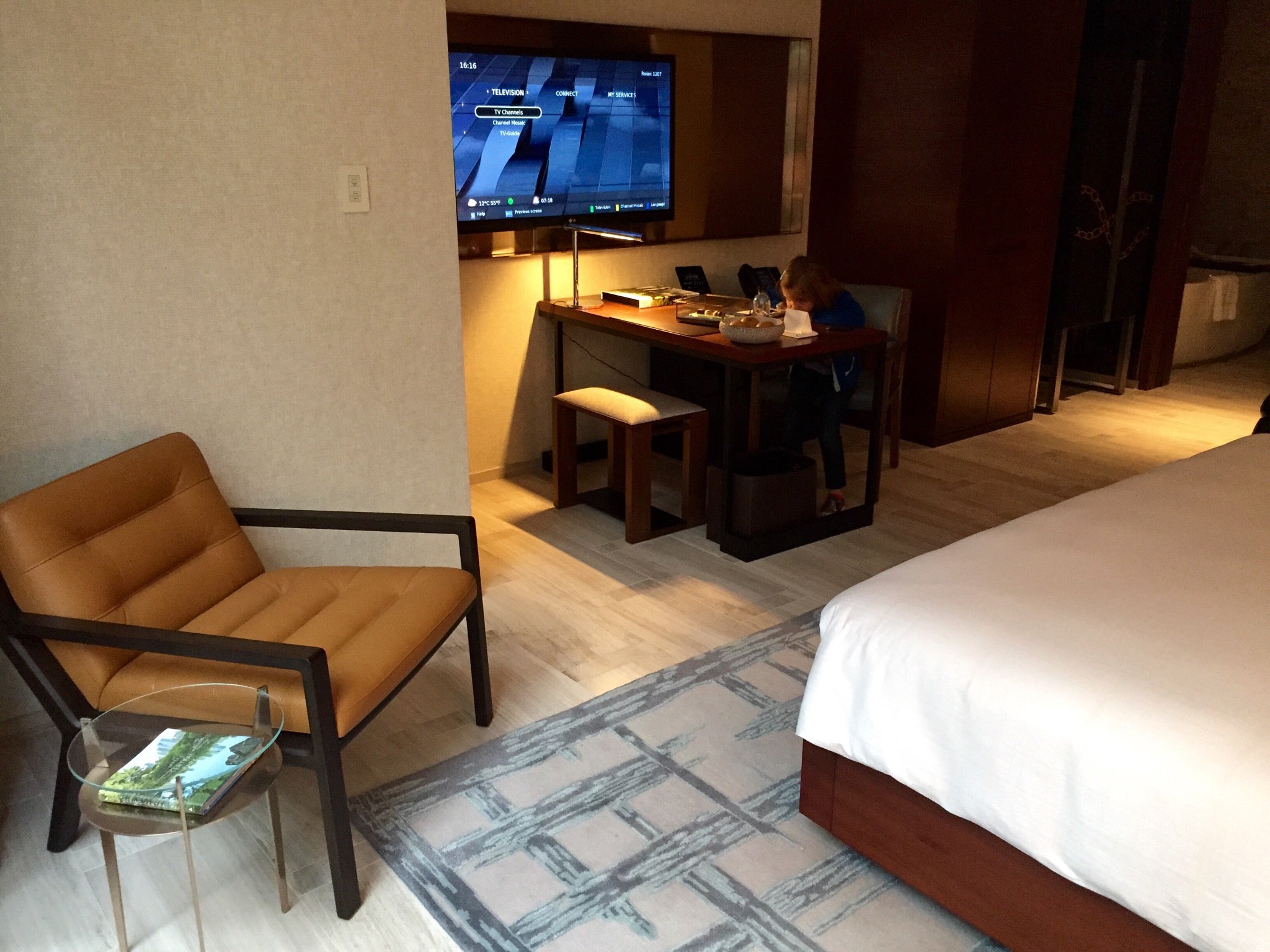 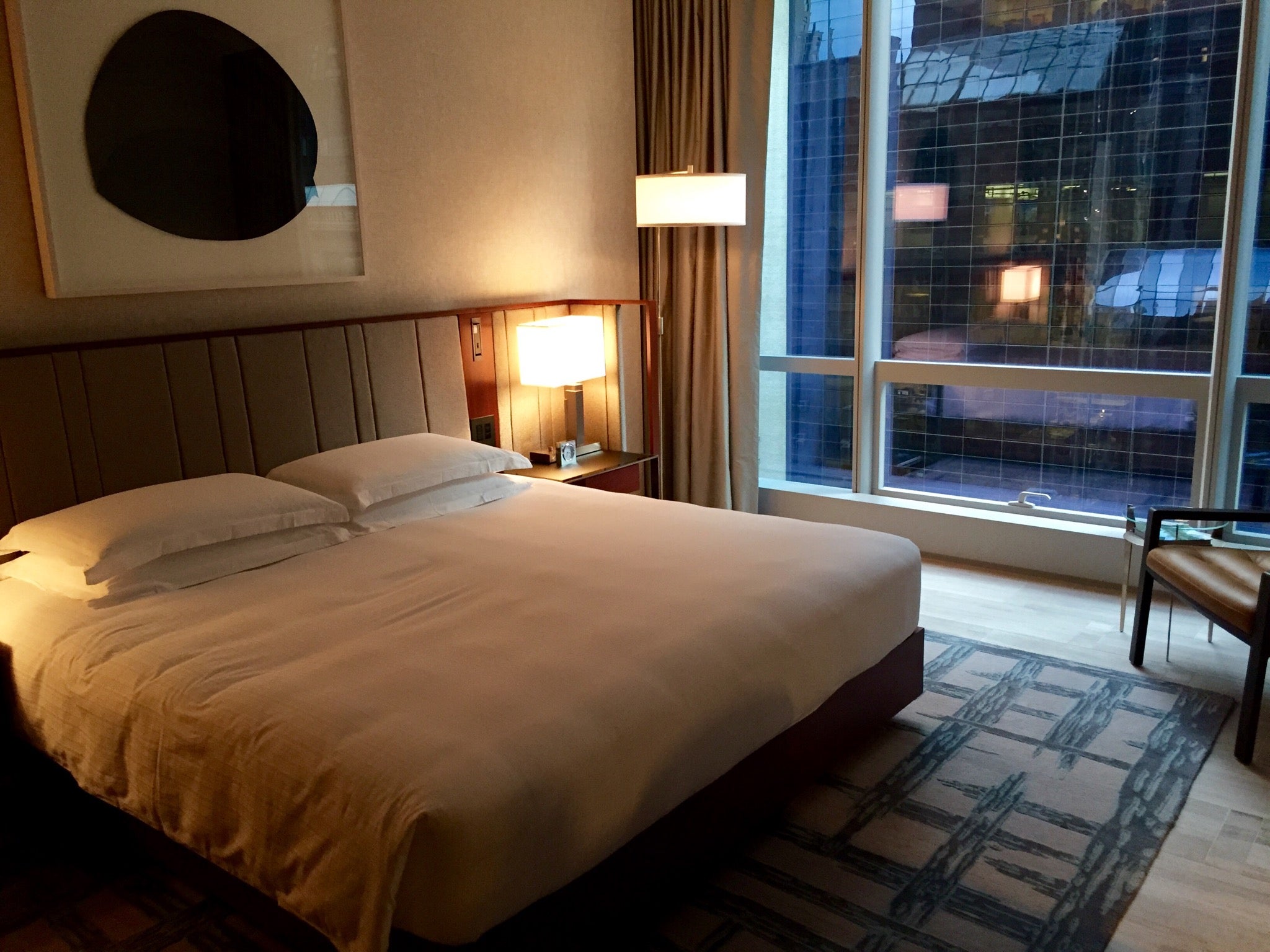 The room was beautiful and plenty spacious for the 3 people it is rated for (the Park Deluxe Double is rated for four people).  The bed itself was very, very hard.  It was absolutely the firmest bed I have ever had in North America and was certainly more in line with what you would find in Europe or Asia.  This may be a good or bad thing depending on your bedding taste, but it had a very negative impact on your sleep as it was not our preferred type of mattress. 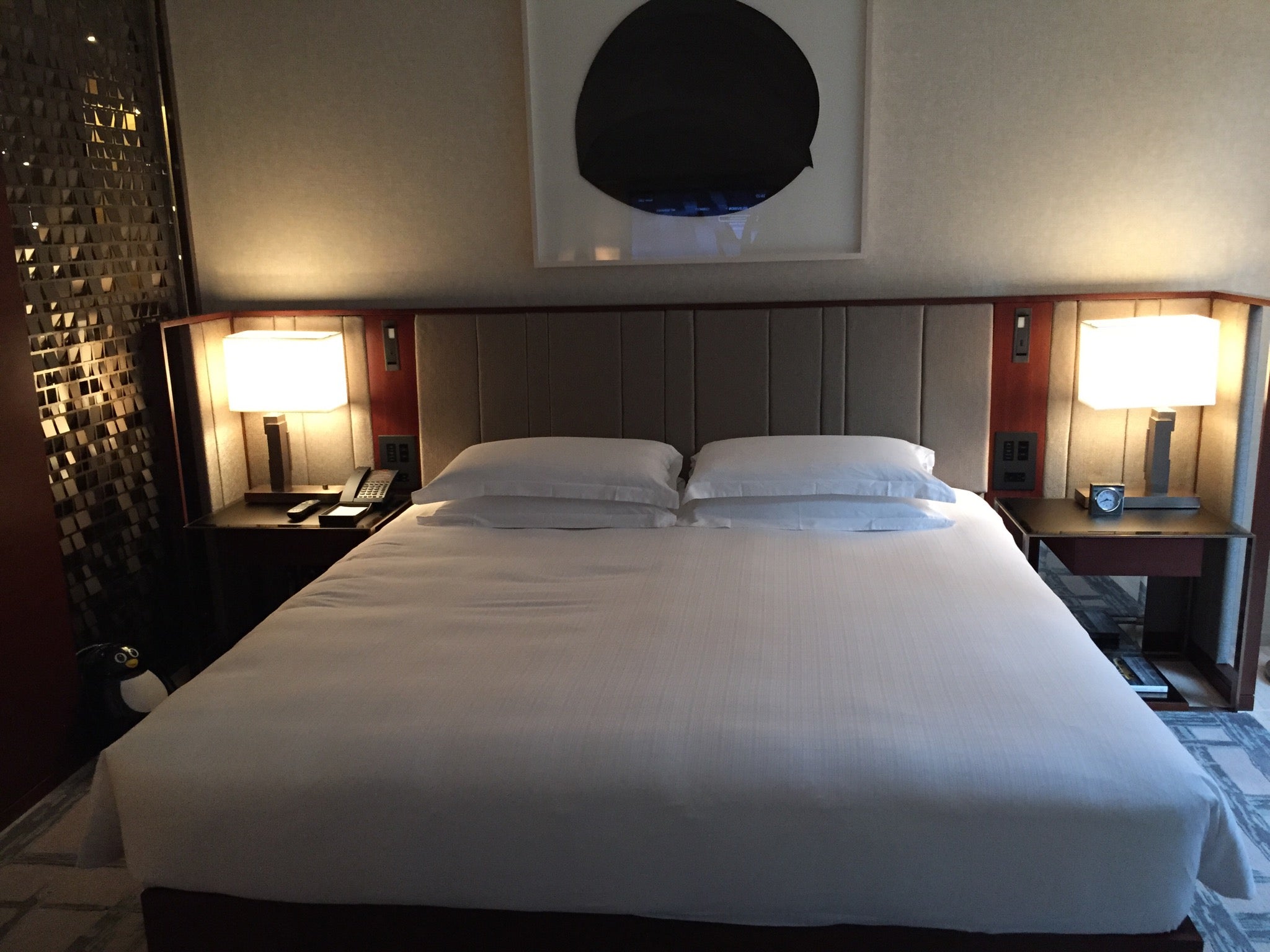 The bedroom had a TV that had a good selection of channels including Disney and Cartoon Network, which was great for us. The room also had the in-house chocolate made amenity waiting for us in the room before we arrived, though we were proactively also offered the 1,000 point amenity since we had not selected the food amenity, which was very nice.

There were also asian pears in the room separate from any specific amenity. 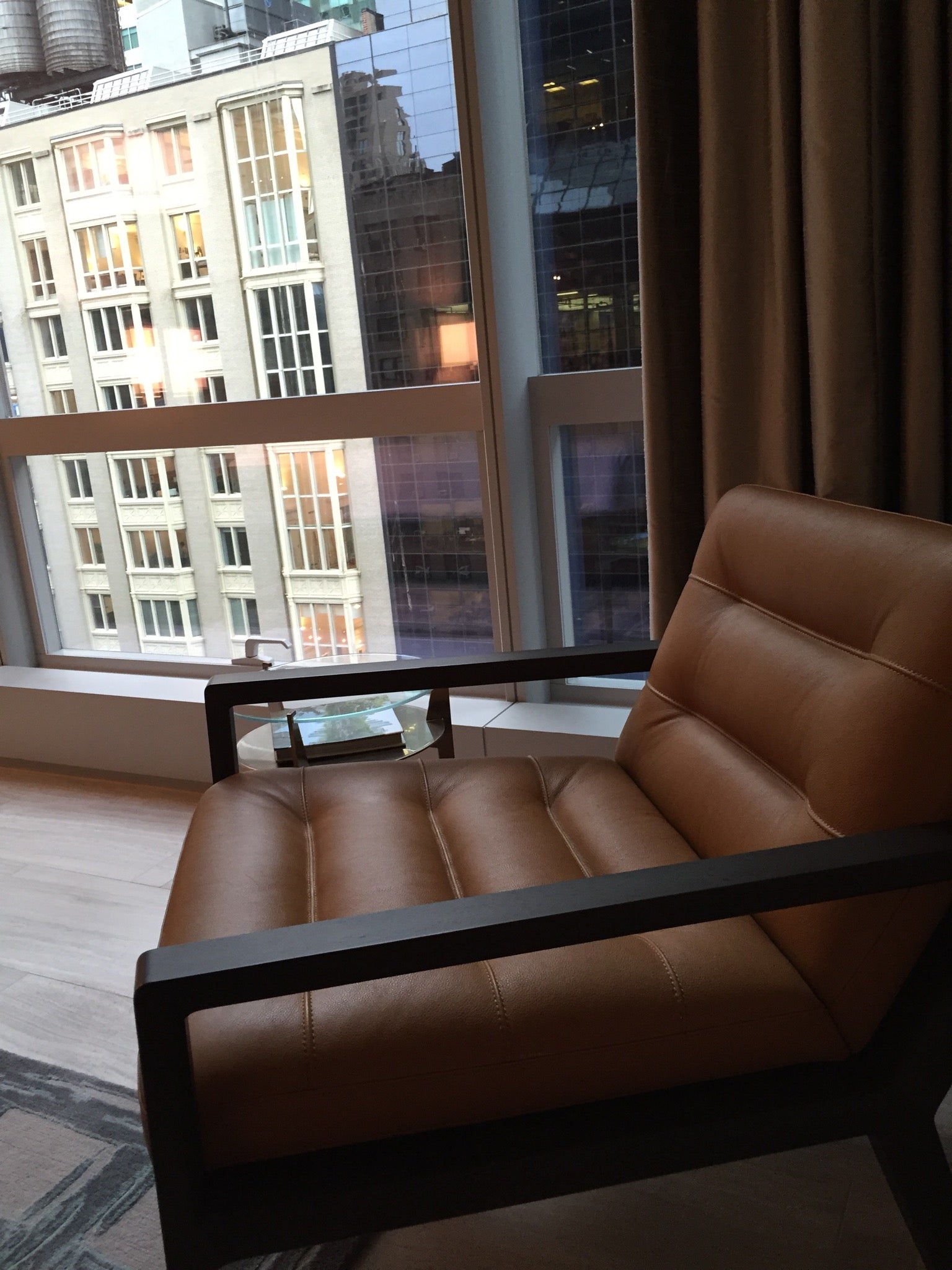 There was also an iPad mini in the room where you could play music, read about the hotel services, and theoretically even order room service.  This did not work for me as every time we added something to the “cart” it deleted the other food items in the cart, however I like the idea of placing food orders in this manner. 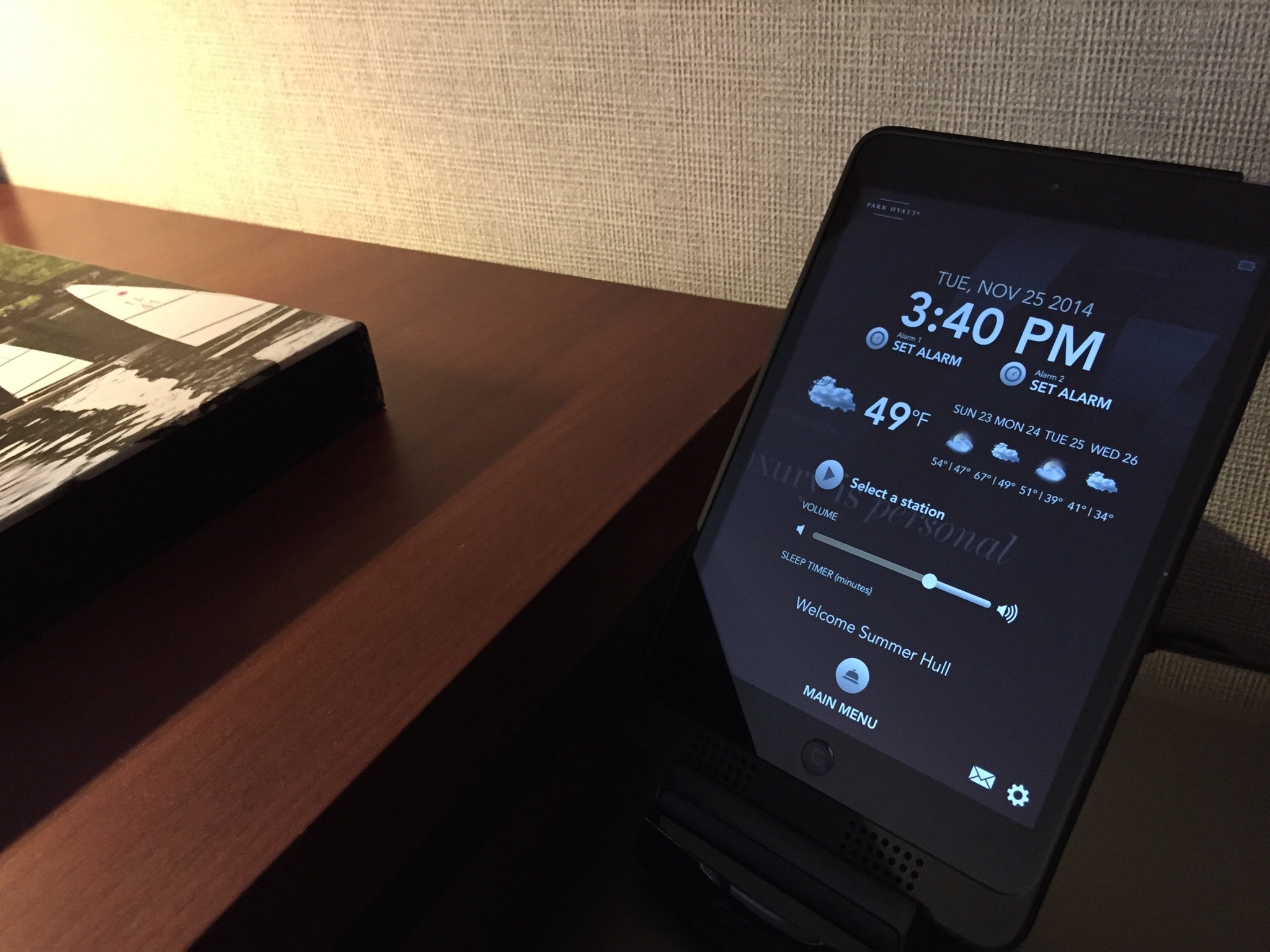 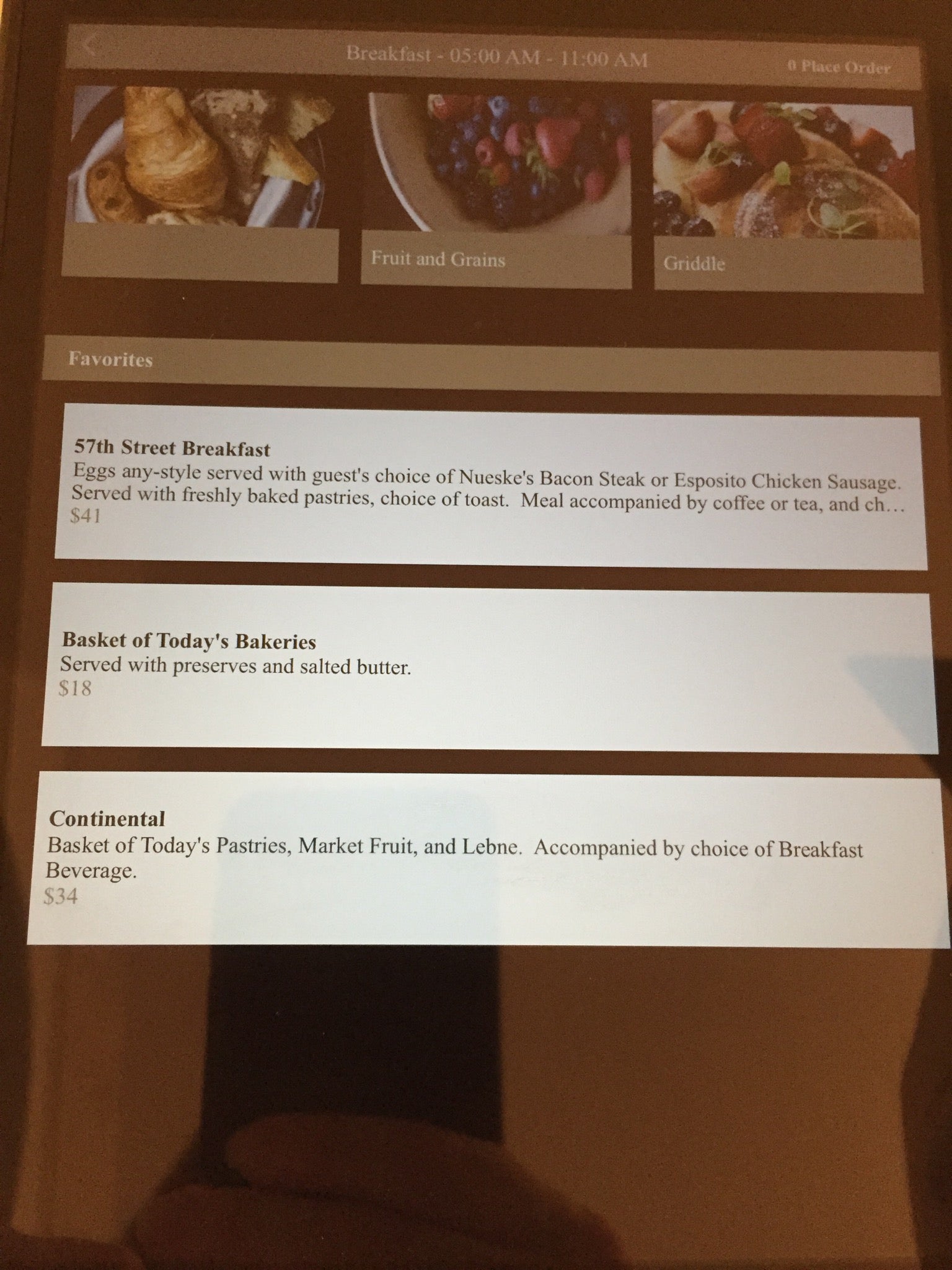 The mini bar in Park Hyatt New York room was very extensive, though I had to admit that I was less than thrilled when the contents of the mini bar were part of our room orientation and my kid immediately started drooling over the gummy bears and such that were pointed out at eye level with her.  No, honey, we aren’t going to eat the $15 gummy bears.  There were two complimentary bottles of water in the mini bar, which was great. 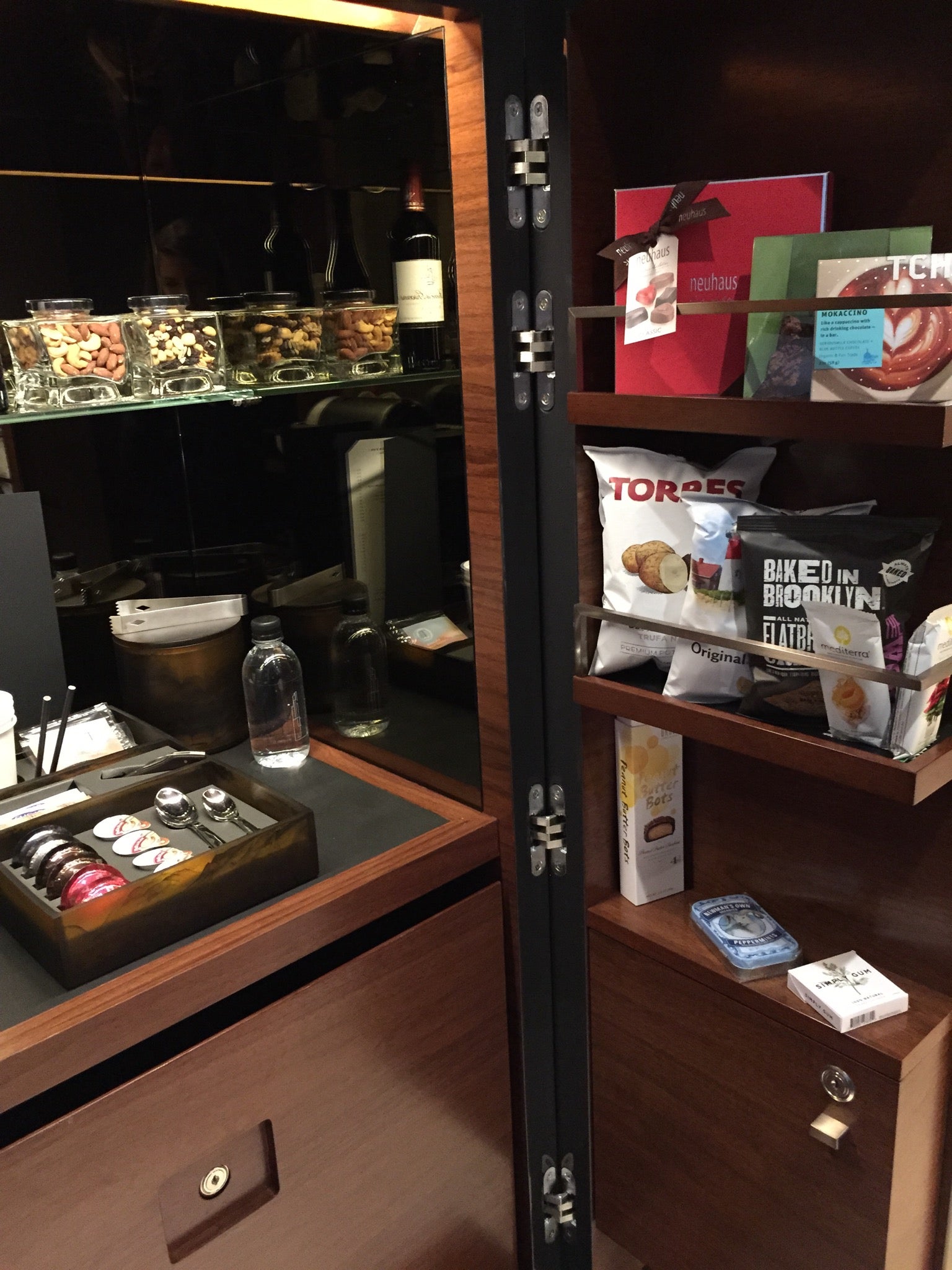 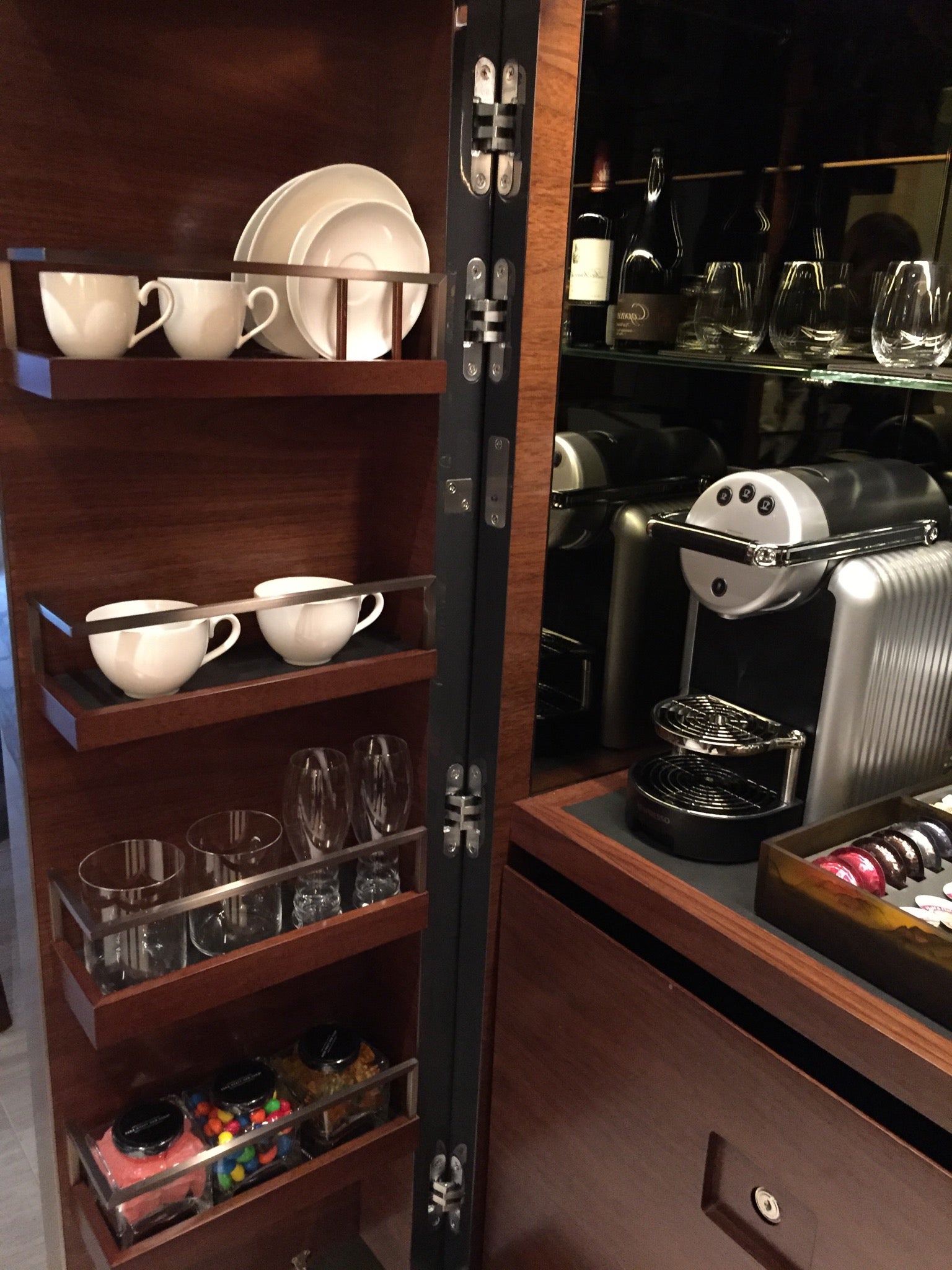 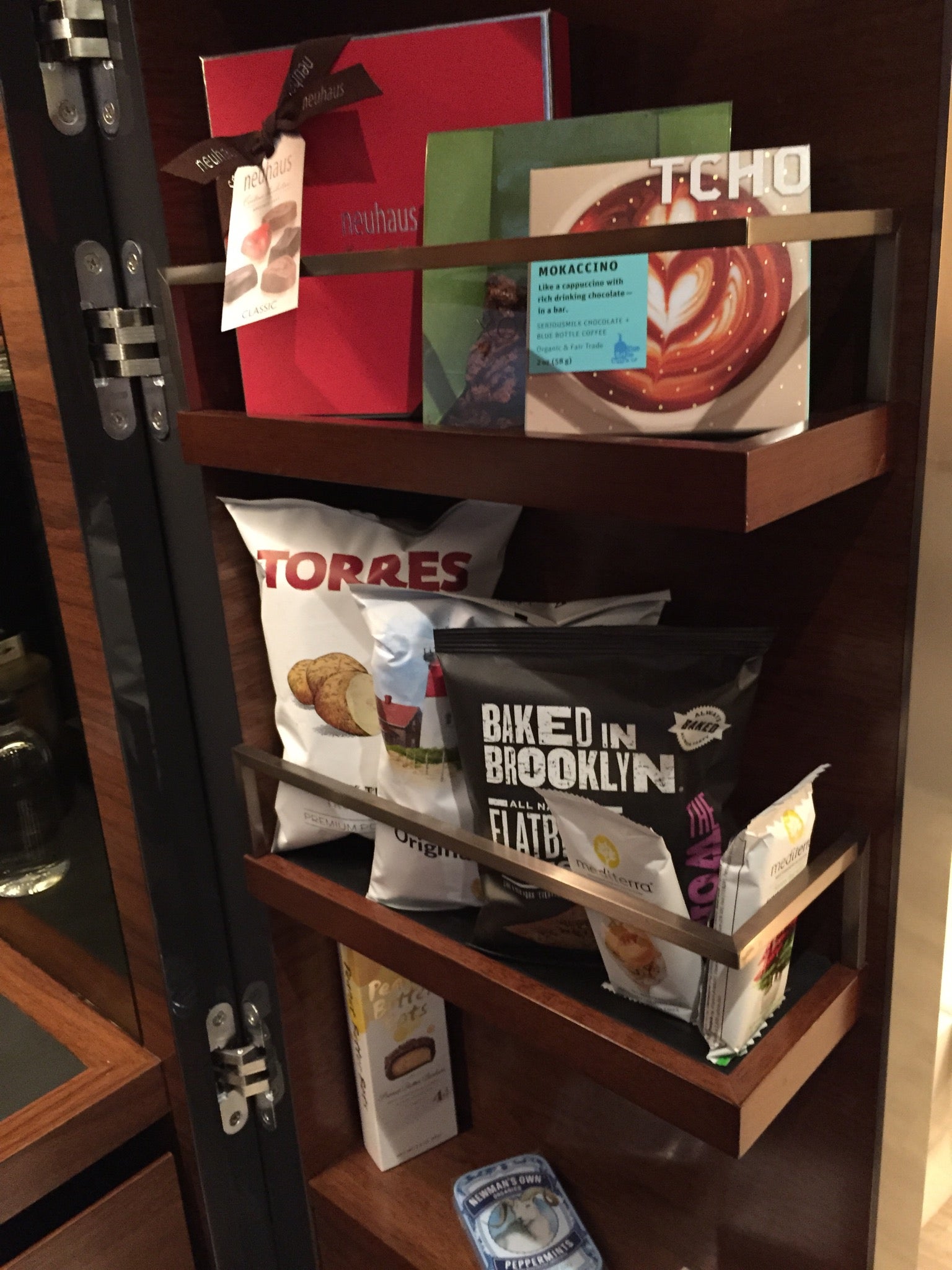 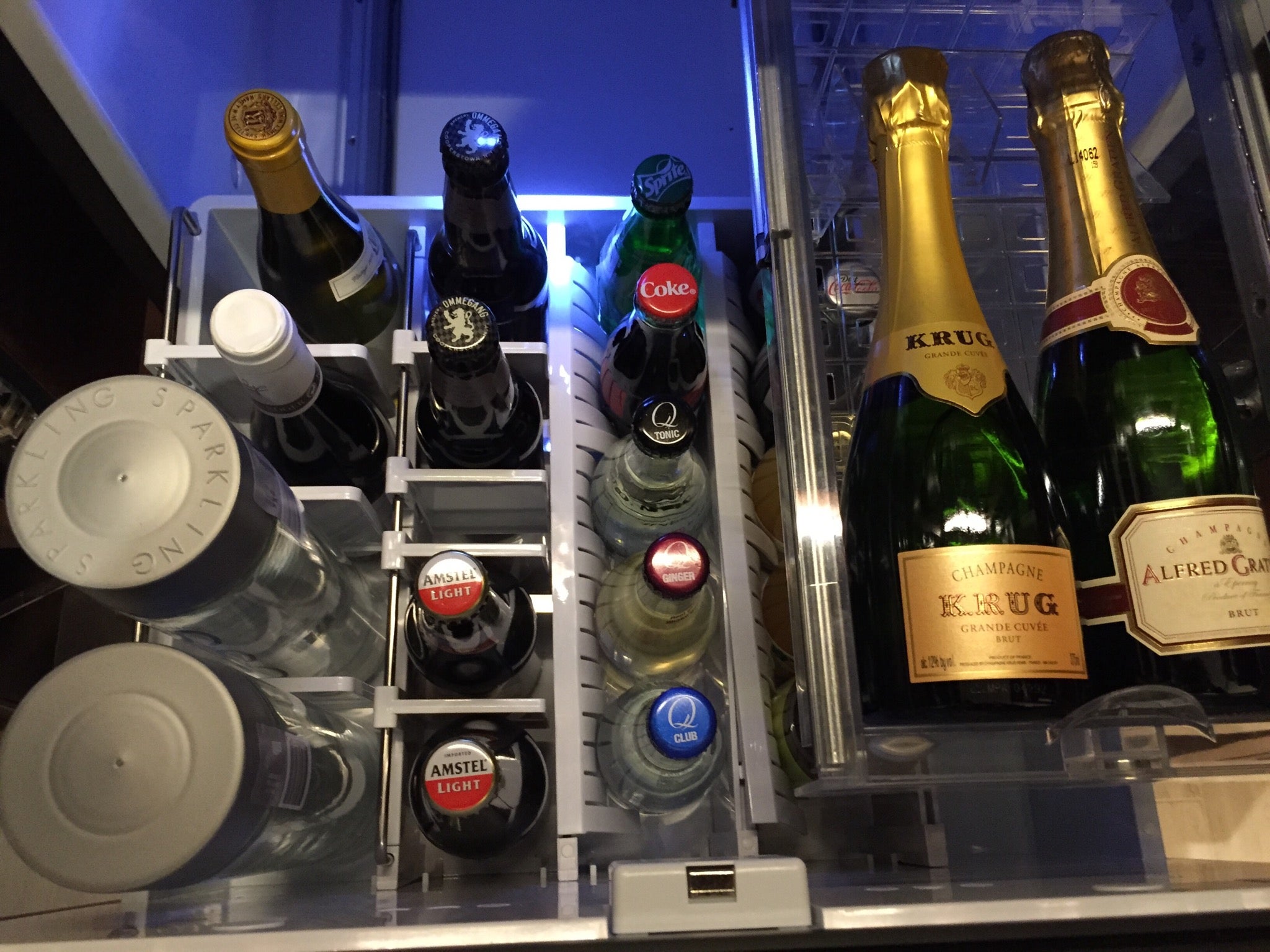 The technology in the room was very intuitive, which I appreciate as I have stayed in too many rooms where I can’t even figure out how to properly turn the lights on or off without calling for help. 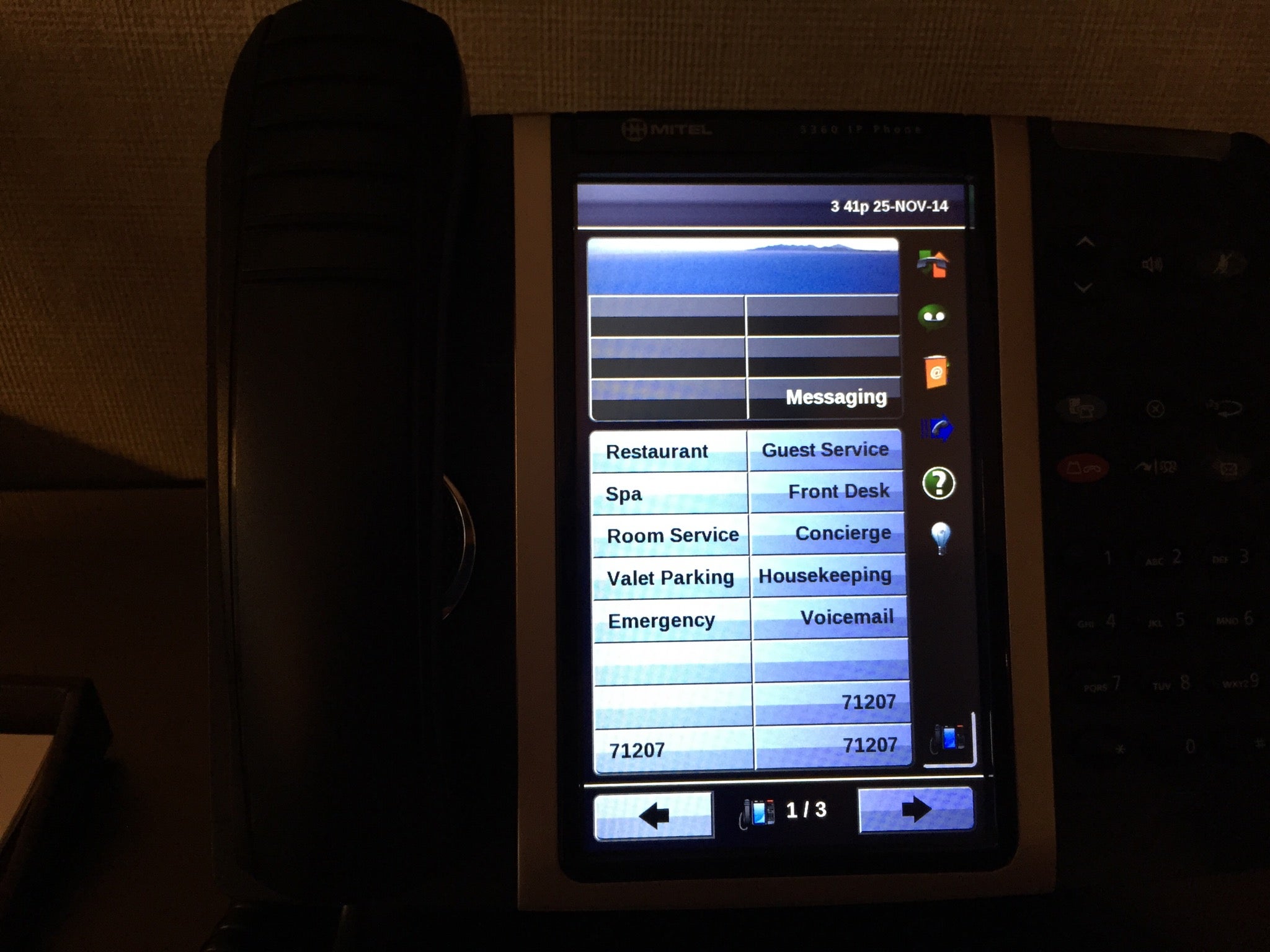 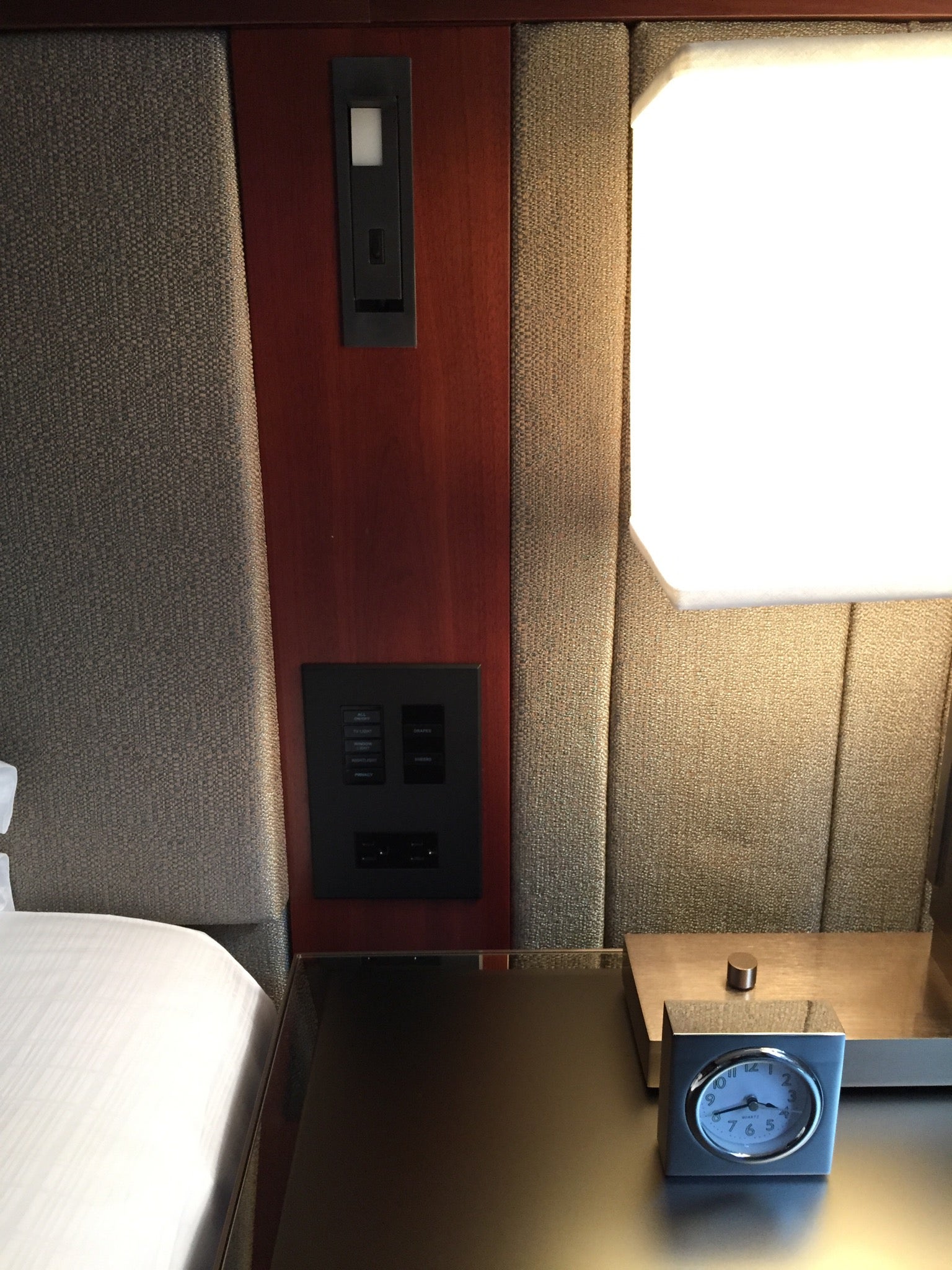 WiFi is complimentary to all guests in the Park Hyatt New York and the speed and reliability was good on my visit.

We ordered room service twice, once for dinner when we were too tired to go back out (the downside of traveling solo with a little one) and once via the Diamond room service breakfast.  The service was prompt and courteous both times, though it did take three visits to the room to get the dinner delivery complete.

There was no child’s meal menu on the iPad, but when I called to place the order they did list some child friendly options that weren’t on the menu.  They also threw in some fresh baked cookies for no additional charge. 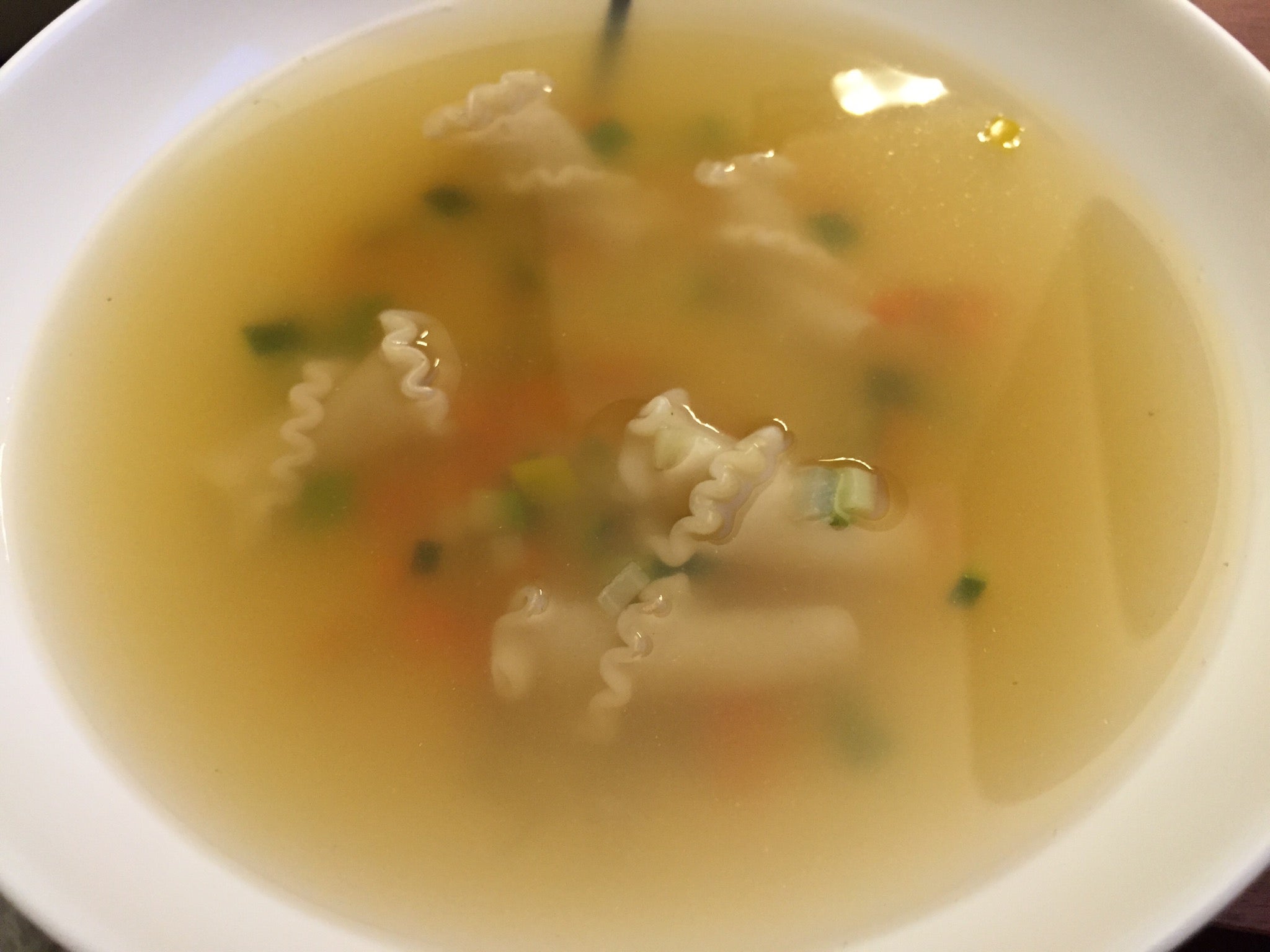 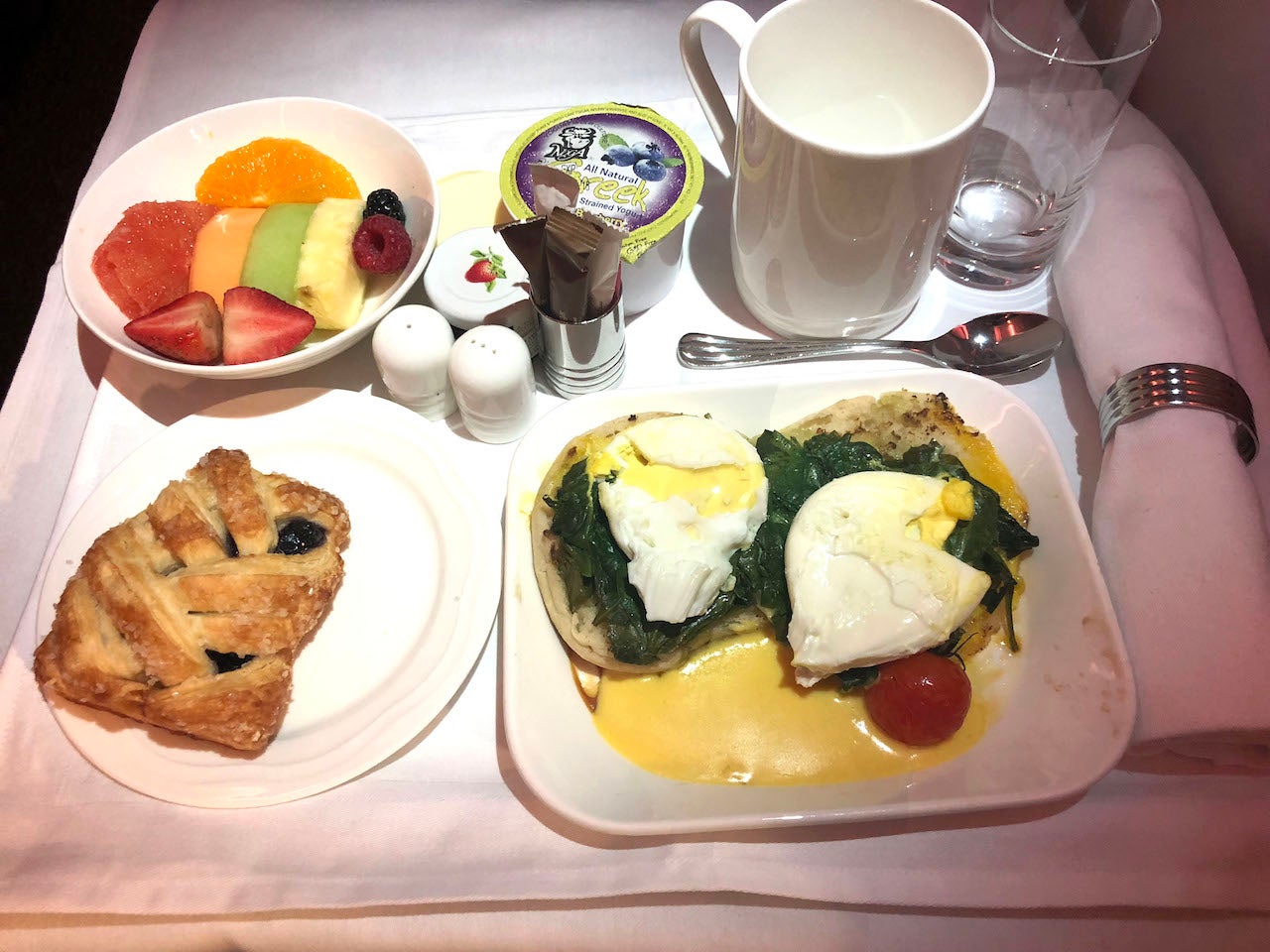 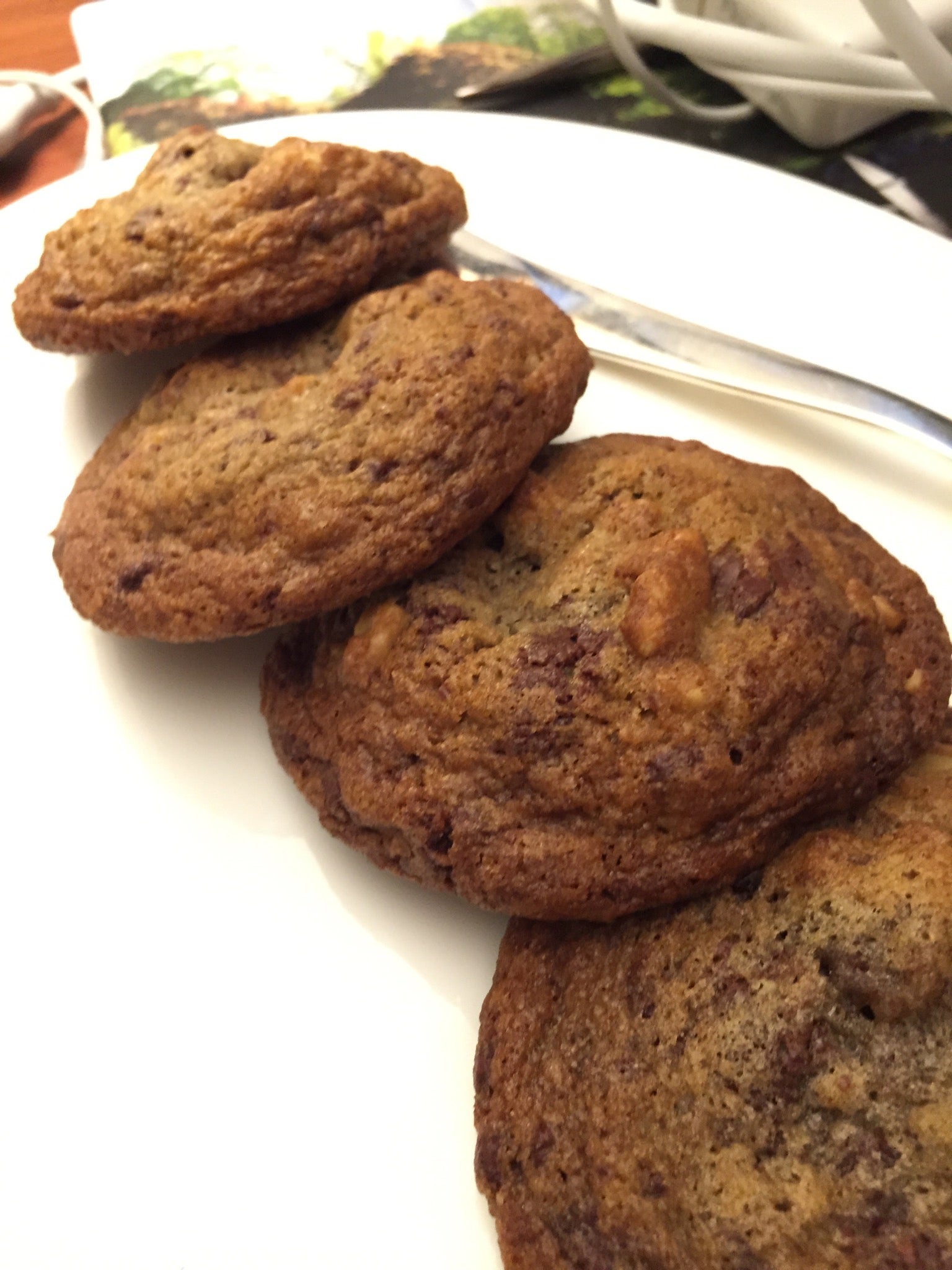 The Diamond room service breakfast charge was 100% removed from the bill, though we did stay on under the prescribed amount of two 57th Street breakfasts.  I tried to be healthy and order the egg whites on the 57th Street breakfast, but while they were good in their own right, the delicious scone in the bread basket was too tempting to pass up!  My daughter enjoyed her pancakes, and I very much enjoyed getting to eat leisurely in the room while we got ready rather than stay hungry until we can get ourselves out of the room and into our day. 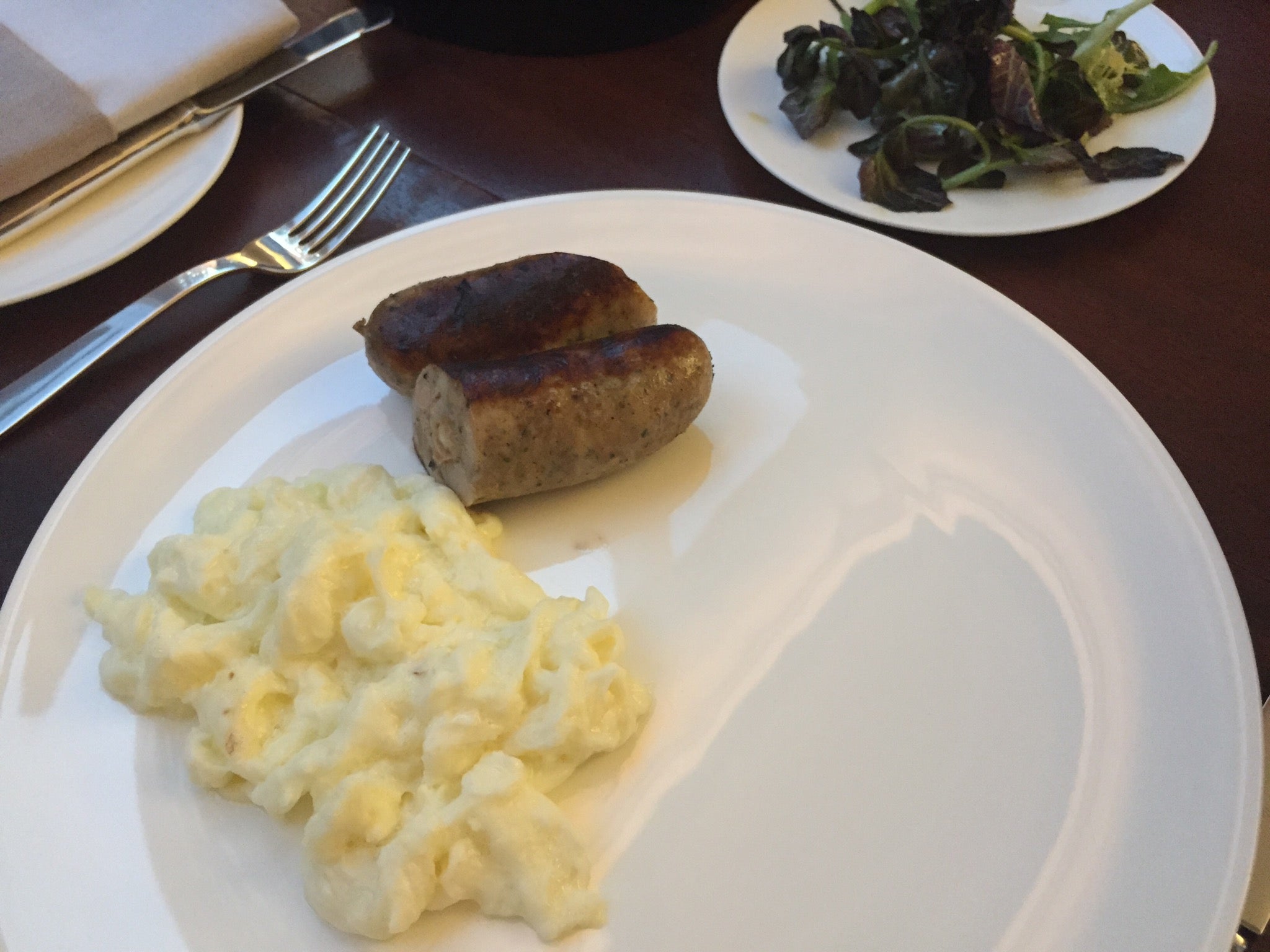 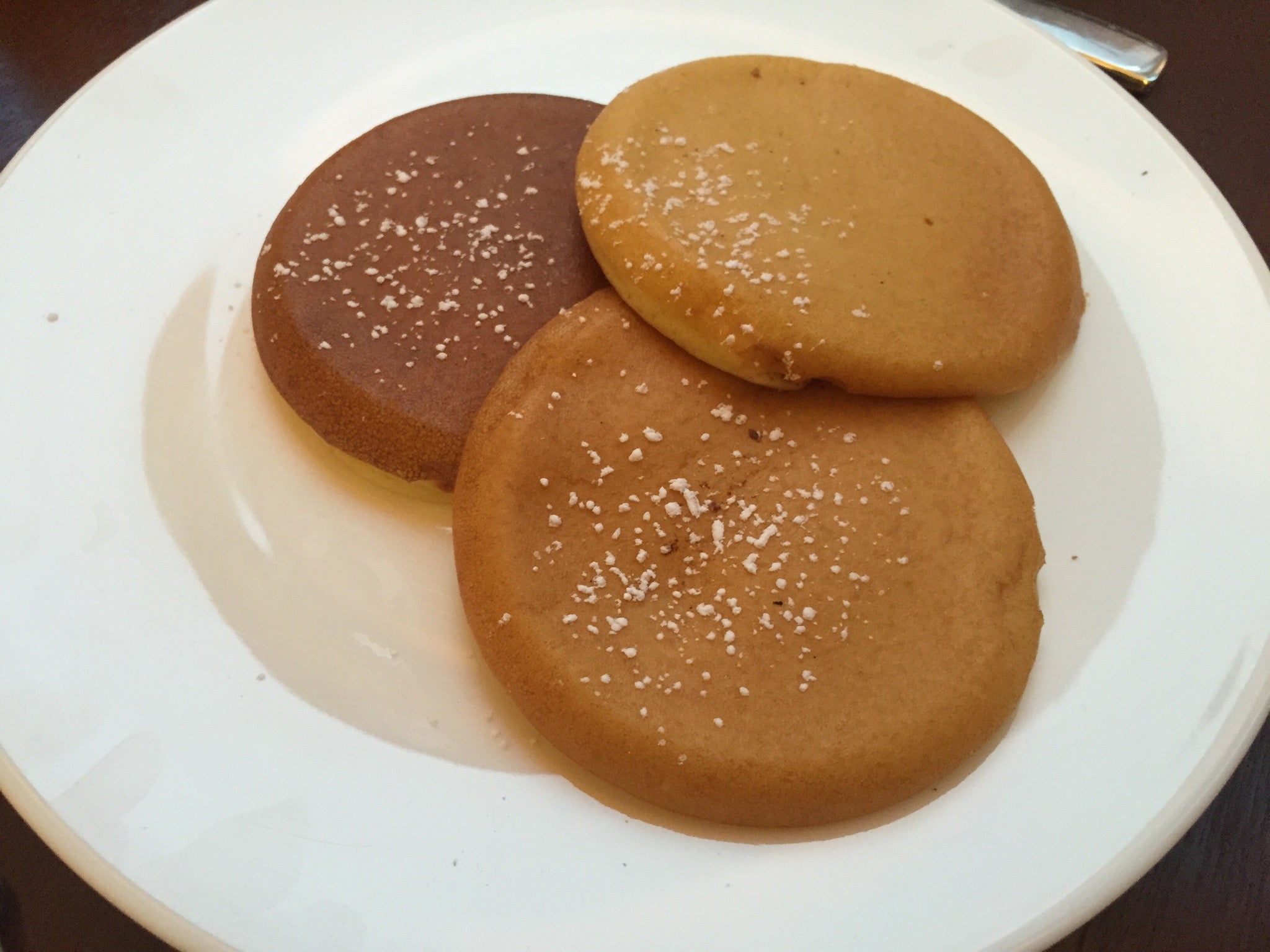 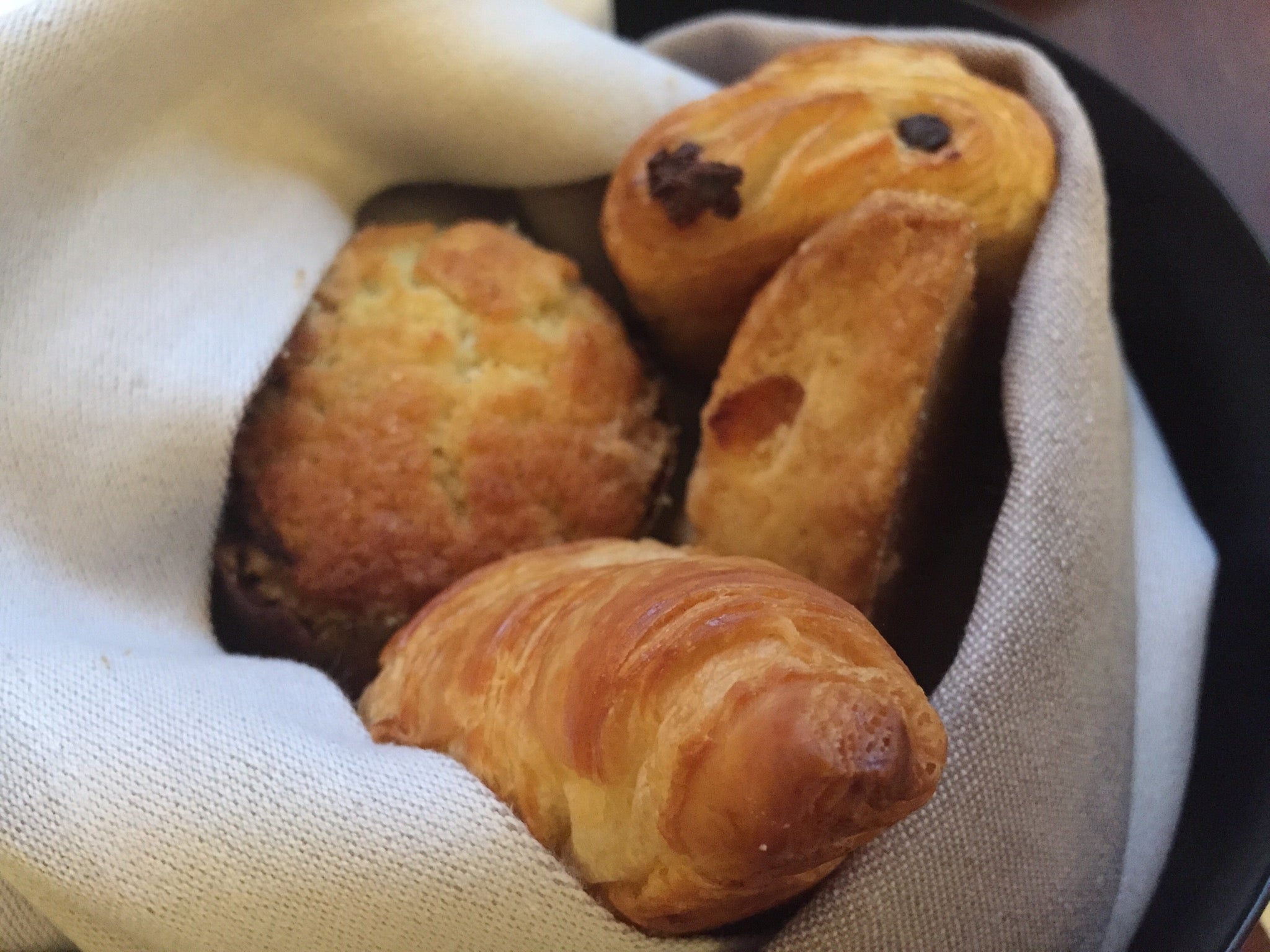 The bathroom at the Park Hyatt New York is very, very nice and spacious.  There is a large free standing tub, a separate toilet, double-sink vanity and a large shower.  That was all very nice, but it was the bathroom heated floors on the cold November days were what made me want to pretty much live in the bathroom. 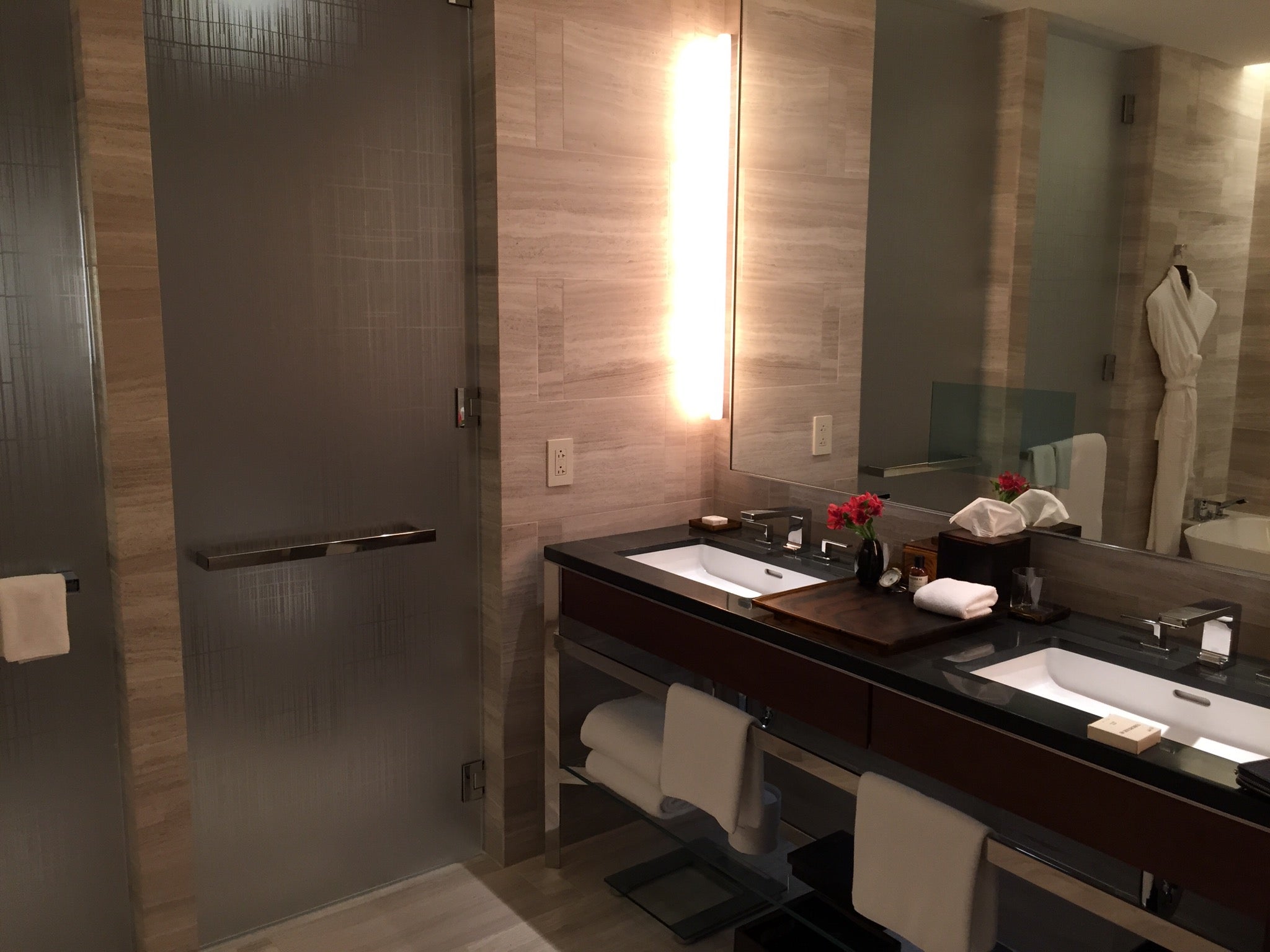 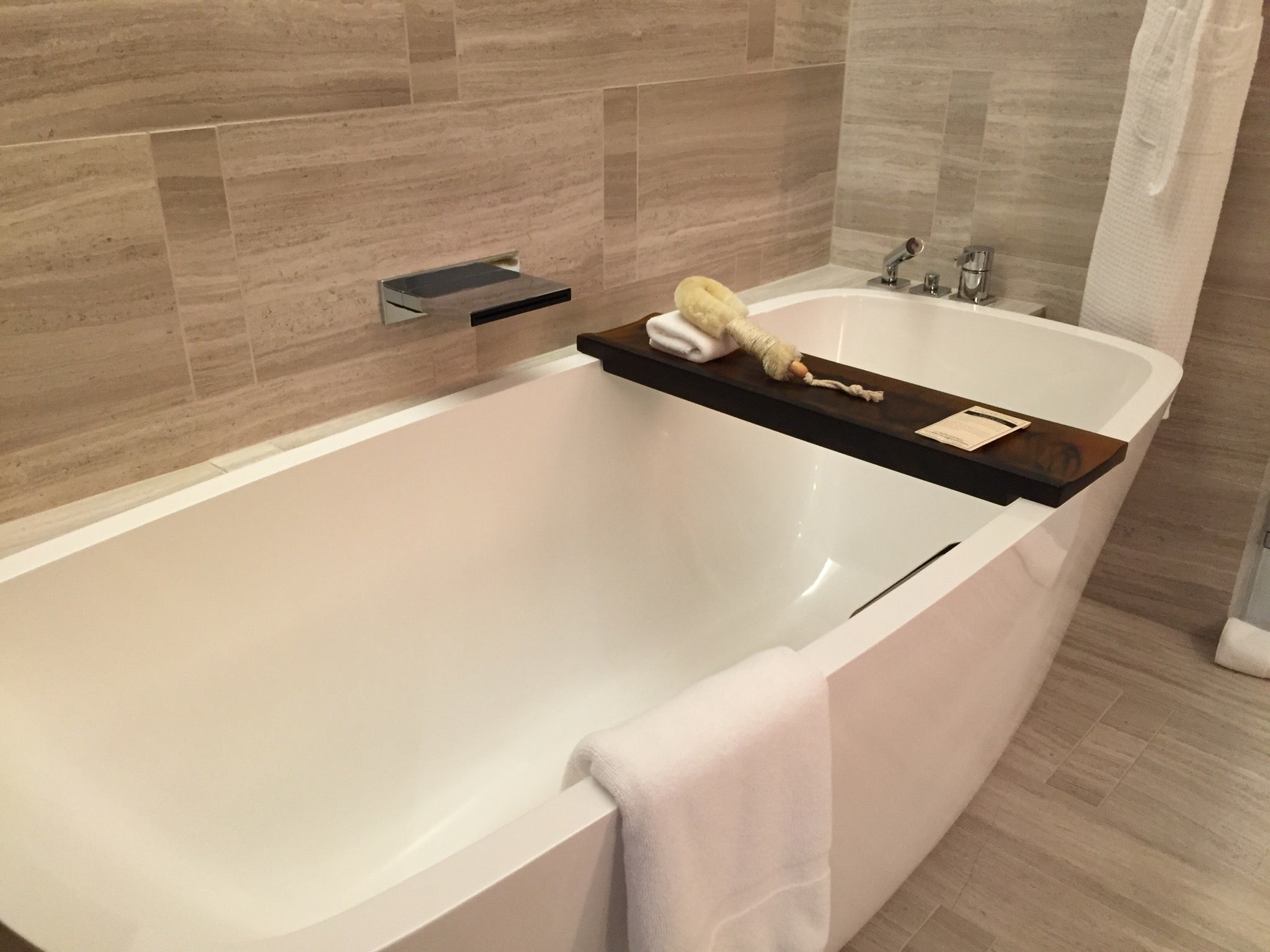 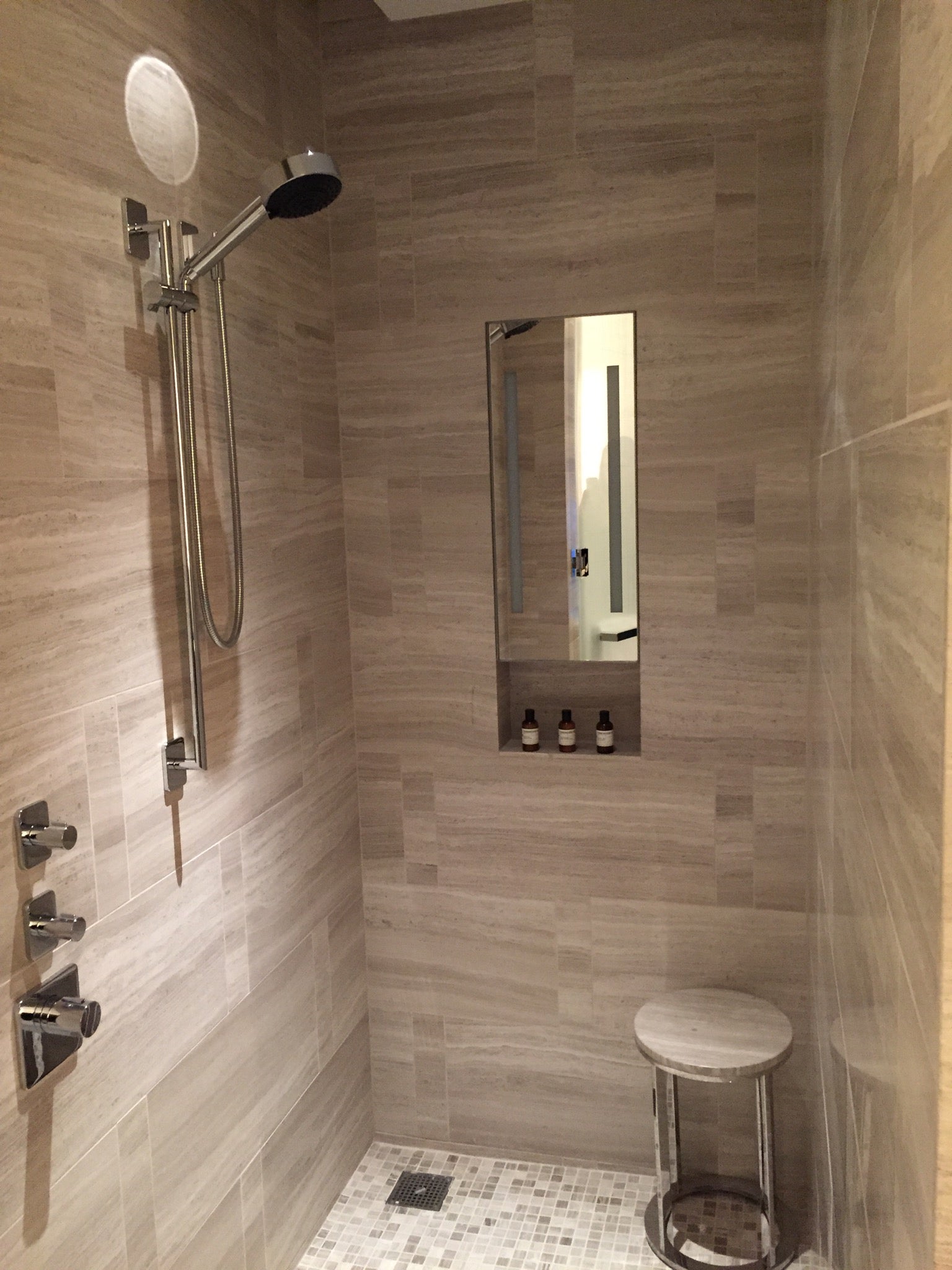 While I did not like the bed at the Park Hyatt New York, I loved the bathroom very much.  Compare this bathroom and its space to others in New York, even at hotels like the Grand Hyatt, and it is immediately obvious how fantastic this bathroom was for my little family. 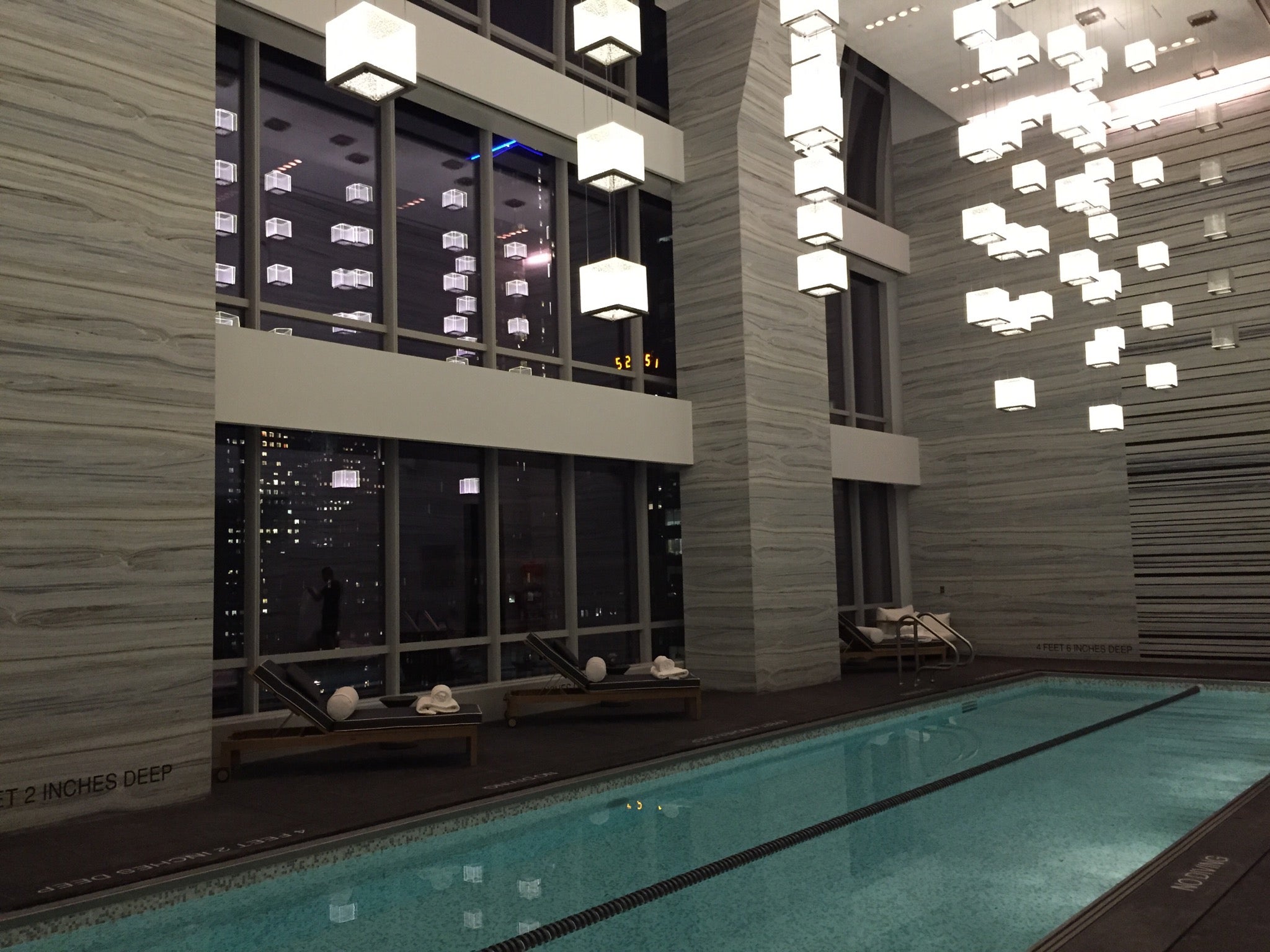 There was not only the large pool, but also a large hot tub, and an amazing smelling steam room.  My kid was overcome with excitement to go for a swim, but ultimately the lap pool itself was a little chilly for our Texas skin, but a few minutes in the hot tub was tons of fun.  There is a lifeguard at the pool, which must be insanely boring, but still appreciated.

The best way to cover your stay at the Park Hyatt New York is likely via the two nights after getting the Hyatt Credit Card and spending $1,000 on it in the first 3 months.  The best offer for that card with a statement credit is typically presented while you are in the process of booking a hotel at Hyatt.com.  If that isn’t an option, it will run you 30,000 Hyatt Gold Passport points per night, which of course you can transfer in from the Ink Plus® Business Card or Chase Sapphire Preferred® Card.  If you wanted to stay on a cash and points rate, you could do that (if available) for 15,000 points + $300 per night.

There is no denying that the Park Hyatt New York was modern and beautiful.  The standouts for me were the pool, the bathroom, the size of the standard rooms, the doormen, the complimentary transportation within 10 blocks or so in the Mercedes SUV (it drove us to Rockefeller Plaza), and that room service breakfast being included as an option for Diamond guests.

That said, the hotel has a few kinks to still work out.  Our key stopped working before our late checkout time (which sounds minor, but is a royal PITA to drag a tired kid back down to the lobby to fix it right before packing up to check out), our dinner took three attempts to be fully delivered, the bed will be quite hard for those used to beds in the US, and the in-room iPad menu does not list the kid menu options, and didn’t work at all for us unless we just wanted to order one item.  That all said, I think the biggest area for improvement is just in the warmth of the hotel….and I don’t mean the temperature.

We didn’t have any problems with the service from any of the staff members there, but I left feeling the hotel was beautiful, but I wasn’t sad to leave.  This is in contrast to the hotel we stayed at the second two nights in New York where the service couldn’t have been more warm and accommodating from the beginning to the end (more on that soon).

This all may be intentional, and it may just be the style of the Park Hyatt New York, but I left wanting them to just be a tad warmer….more like the awesome doormen.  If you are spending 30,000 points or $600 – $800 a night for a standard room, I think it is reasonable to want the stay to be pretty exceptional.  If it isn’t, then what is the point?

It was a good stay, it was a beautiful hotel, and I would consider staying there again at some point since it is only 5,000 additional points over most of the other Hyatt options in NYC.  However, don’t get frustrated if the award availability isn’t there for your dates as other Hyatt NYC options are also quite good (Andaz 5th Avenue especially), and I don’t think this hotel has quite put all the pieces together to totally knock it out of the park the way I think they have the potential to do in the future.

Summer Hull aka Mommy Points, ran the Mommy Points site for families who want to travel more for less using miles and points for seven years and now heads up TPG Family when she isn't exploring the world with her own two girls.
You might like
Deal alert: Alaska Airlines offering 2-for-1 fares for 48 hours
Deals
47m ago
United brings back award flights starting at just 5,000 miles each way
News
1h ago
Confirmed: American suspends mileage expiration through 2020
News
2h ago
Chase Sapphire Preferred® Card