Best Destinations to Ring in 2015 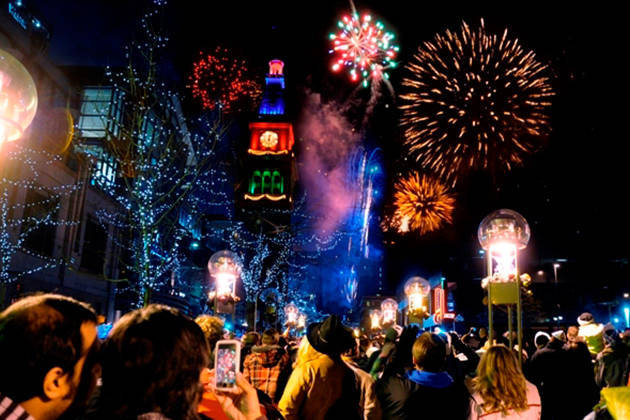 Best Destinations to Ring in 2015
This post contains references to products from one or more of our advertisers. We may receive compensation when you click on links to those products. Terms apply to the offers listed on this page. For an explanation of our Advertising Policy, visit this page.

When the New Year's ball drops between Wednesday, December 31 and Thursday, January 1, where will you be? No worries if you're still undecided, because travel booking site Kayak.com has sifted through a confetti spray of data to determine New Year's destinations that attract the most searches and have the lowest airfares - and the TPG Team has added a few of its own picks as well.

After reading this post (and our recent one on When to Book Christmas and New Year's Travel), you can start packing for a fun, affordable celebration - and a great start to 2015!

Most Popular Destinations for New Year's

Based on the highest number of Kayak.com searches for travel dates between December 26-31, 2014 and ending between January 1-4, 2015, here are the travel booking site's picks for popular new year's destinations:

Orlando. While Disney’s Magic Kingdom and Epcot Park stay open late to hold holiday festivities for families, the over-21 crowd will be heading to Orlando's Wall Street Plaza, a hot spot to find great nightlife, renowned DJs and light shows.

Miami. Break out the congas and prepare for a night of scantily clad party people, as Miami has you covered for everything from a velvet-roped, black-tie events at hotels to nightclub and poolside bashes that require little more than a swimsuit. If you're looking for a more laid-back evening, though, head to Aventura Beach, where you can have a romantic picnic while watching free fireworks.

New York City. If you can endure several hours sans bathroom and food, New Year's Eve in New York City’s Times Square will reward you with the ceremonial dropping of a 12,000-pound crystal ball and a 60-second fireworks display. If staying put isn’t your thing, though, join the crowd of freezing athletes in the NYRR Midnight Run and burn off a few of those champagne calories.

Las Vegas. Sin City is the ideal place for some New Year’s debauchery. If you're not looking for vice, though, grab a spot on the Strip (which will be closed to traffic on New Year's Eve) and enjoy a fireworks show that claims to make Times Square's Waterford crystal ball look like a cubic zirconia.

Cancun. If you’re down to party 'til the sun comes up, head to Cancun, Mexico, where it’s customary to stay up to watch the first sunrise of the new year. For a tradition you can enjoy from the peace of your hotel balcony, devour one grape and make one wish at each of the twelve strokes of midnight. For more on getting to Cancun, see 5 Sunny Award Travel Destinations for the Holiday Season.

Fort Lauderdale. For a New Year’s celebration that’s friendly to both your family and your wallet, check out Fort Lauderdale’s Downtown Countdown, a free street festival with bounce houses, face-painting games and live music. If you’d rather celebrate in style with just your nearest and dearest, get your tickets to a river boat tour and mingle with a small group at sea.

Los Angeles. If you're over 21, drink, dance and celebrity-stalk your heart out at restaurant and bar parties all over L.A. If you’re feeling ambitious, pick up a ticket to the annual Hollywood Club Crawl, where you’ll get access to four of the city's hottest nightclubs. If you have your sea legs, head down to Long Beach and hop aboard the Queen Mary for an evening of dinner and live musical performances.

San Juan, Puerto Rico. Even the locals hit up hotels for New Year’s Eve in San Juan, so follow their lead and head to the Condado district for music, dancing and spirits. If you can’t fathom ringing in 2015 without pyrotechnics, both Condado Beach and the Puerto Rico Convention Center have fireworks displays at midnight. For more on getting to San Juan, see 5 Sunny Award Travel Destinations for the Holiday Season.

Denver. Grab the kids and ring in the New Year in the Mile High City. Start with a daytime trip to the Butterfly Pavilion for a kid-approved celebration complete with bubble wrap, confetti and a bevy of winged insects, then graduate to some adult activities at the 16th Street Mall, where you'll find fireworks and microbrews.

Honolulu. Spend a relaxing evening watching the public fireworks on Waikiki Beach or head to the Aloha Tower for live music and cocktails that will last from 2014 'til 2015. For more on what's doing in Honolulu and beyond, see What to Do in Oahu, Hawaii.

Based on the lowest average display prices for travel dates between December 26-31, 2014 and ending between January 1-4, 2015, Kayak.com has compiled a list of the cheapest airfares for U.S. destinations during the New Year's holiday. Unsurprisingly, several of them are freezing-cold destinations like Washington D.C. ($327) and Boston ($356). However, the city with the least expensive airfare, Chicago ($290), made our list of Christmas destinations, so don't dismiss it out of (gloved) hand.

Whether you're looking for a far-flung winter adventure, a celebration that lasts all night, or one that's relatively close to home, these three destinations are our team's picks for a great New Year's Eve:

New Orleans. Yet another city with low airfares this season ($391), the Big Easy celebrates New Year’s Eve in Jackson Square, with live music performances continuing until the traditional fleur-de-lis drops and a spectacular fireworks show explodes above the Mississippi River. For a close-up view of the action, climb aboard either the Creole Queen paddlewheeler or the Steamboat Natchez for a dinner cruise that includes live music and an open bar. If you'd rather stay ashore in New Orleans, tuck into a multi-course reveillon dinner at one of the city's best restaurants, or hit the clubs on Frenchmen Street to take a music crawl into the wee hours of the morning.

Reykjavik, Iceland. Kick off the last day of 2014 by cheering on hilariously dressed runners in the annual New Year's Eve 10K. Then at night, shortly after the country's enormously popular end-of-year comedy TV show, Áramótaskaup (aka "New Year’s Eve Ridicule"), Reykjavik locals come out of their homes to gather around a few huge bonfires and shoot off a sky's worth of dazzling fireworks displays. Speaking of the sky, you could also opt to greet the New Year beneath the spectacular Northern Lights (weather permitting) and/or celebrate the start of 2015 in the city's many hopping bars and nightclubs, most of which will stay open until 5 am.

Rio de Janeiro. While it's unlikely that you'll snag a reservation for a special Véspera de Ano Novo (New Year's Eve) dinner at the last minute, the city's epic 20-minute fireworks along Rio's Copacabana Beach are free to the public. Dress in an old/cheap white outfit for good luck (but not black, as this will doom you for the coming year), pull on some sturdy closed-toe shoes, and bring along a bottle of Champagne to either spray on your fellow spectators or toast the new year, as well as some flowers to toss into the sea. The beach experience includes live music on several stages, a Ferris wheel, and a digital light show; if it's too jammed down on the sand, head up to the beach's bike lanes, which will be closed to traffic during the celebration.