Long Term Family Travel and the Perks of Extended Vacations 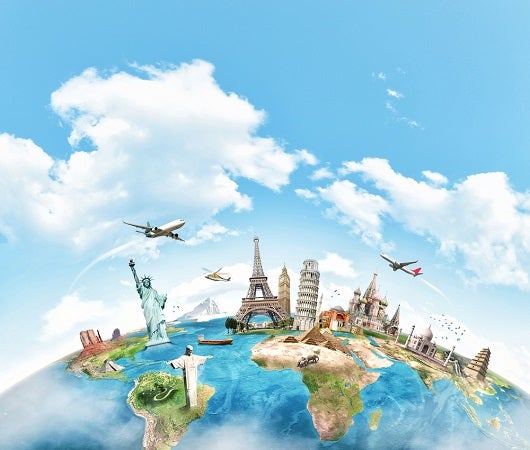 Long Term Family Travel and the Perks of Extended Vacations
This post contains references to products from one or more of our advertisers. We may receive compensation when you click on links to those products. Terms apply to the offers listed on this page. For an explanation of our Advertising Policy, visit this page.

While I love slipping off for a weekend or overnight getaway, there's much to be said for longer trips, which give you the opportunity to fully unwind and explore your surroundings. Today TPG Contributor Jason Steele chats with family travel blogger Shawn Coomer about the benefits, challenges, and logistics of traveling for an extended period, and offers some tips for planning your own journeys.

Have you ever felt like quitting your job, selling your house, and living on the road? Perhaps we've all thought about it, but Shawn Coomer (who writes the blog Miles to Memories) has done it. In 2007, Shawn and his wife spent 18 months traveling around the Pacific Rim with their son, who was just shy of his seventh birthday when the trip began. Since then, he and his family have been on many other extended adventures, including a three month trip to Europe earlier this year.

I recently had the chance to speak with Shawn about his experiences with long term travel, and about how to weigh the logistical challenges against the many benefits. Here's what he had to say:

How did you get started with the idea of taking long term, family trips?

Shawn: I had always wanted to travel, but I never had the chance since our son was born when I was just 18. One day, I was talking to a co-worker who had taken a month long trip. Realizing that other families are actually doing this, we figured we could too. In 2007, when I was 25 and my son was about to turn 7, we decided to sell our house and take him on a trip around the world. We started out by spending three months just traveling around the United States, before continuing on to Central America, Fiji, New Zealand, Australia, Southeast Asia, China, Mongolia, and Japan.

How do you plan a longer trip like this?

Shawn: In many ways, you really can't plan longer trips like these the way you would a shorter vacation. We started in the United States so we could get used to the three of us traveling together, but we never made reservations for flights more than a few weeks in advance, and sometimes we booked them just a few days out. In many cases, we showed up in a city with no hotel reservations. In the end we never did make it around the world, and the trip concluded after spending two months in China, experiencing the Beijing Olympics, and spending a few days in Japan, before flying back to the United States.

How were you able to take such a long trip economically?

Shawn: At that time, I wasn't really into points and miles the way I am now, so I learned a lot of tricks for budget travel. For example, showing up in a city without a hotel reservation, we were often able to negotiate with hotels for a lower rate. We also tried to set a budget and to record all our expenses. This let us know when we had to cut back on our spending, but also when we could splurge a little bit. During this time, we spent less than $50,000 total.

How do you handle your son's education when you travel for these long periods?

Shawn: At first, we approached the administration of my son's school (where he would have attended second grade). They basically informed us that if we weren't going to be living in their district, then we didn't need to do anything as far as they were concerned. We made an effort to teach him while we were traveling, but we didn't do anything formal. When we returned, we were told that since we didn't keep any records of his education, he had to take tests to get out of second grade, which he passed. In retrospect, we should have spoken to someone higher up in the school district, so we could have known about this requirement in advance.

On our most recent trip to Europe last winter, we took our son out of eighth grade for the second half of the year. During this three month trip, we had him use an online program to keep him moving forward in math, reading, and science. This program tracked the time he spent on each subject and his progress. And of course, he also learned a lot of history during our travels, since we were moving through parts of Europe that offered so much to see and experience. We took advantage of our surroundings by having him read books and study things that were tied to the places we visited.When we returned in April, we spent two months home schooling him on aspects of the core curriculum that we were unable to complete on the road.

What were some of the challenges you faced on these trips?

Shawn: I would say that the number one challenge is fatigue. When you're on the road for a long time, fatigue builds up and you sometimes don't see things clearly. For example, in Vietnam we booked a tour, but in the end we were dropped of by a taxi in a town where no one speaks English. The taxi driver instructed a couple motorcycles to take us from there, but they offered us no helmets and we were carrying big backpacks. Ultimately, we found helmets, and had one motorcycle go slow with my wife and my son, while I carried the packs on the other.

In China, we decided to cruise up the Yangtze, and we opted to take a boat used mostly by locals that was one tenth the price of the typical tourist ship. No one on our boat spoke English during the two-night cruise, and on the first night we heard what sounded like a rat crawling around in our room. We eventually realized that the rat was inside of a wall, and that we had to just deal with it. There will always be things that can go wrong, but on the other hand, we saw amazingly gorgeous scenery.

Apart from that, every child learns differently, and it can be difficult to be both a parent and an educator while you're traveling. Frankly, I don't know how parents home-school their children year round.

What are some of the benefits your family realized from these kind of trips?

Shawn: Having the experience of traveling all over the world has given our son confidence. He's not afraid to just do things, whereas a lot of kids are kind of in their shells. Children are more resilient than we give them credit for. I think as parents we tend to put children in bubbles, and too often we don't take them places. For example, we visited Colombia this summer for a few weeks, and we found the country to be very safe and our experiences were rewarding. So I would say don't be scared off, as the benefits of long-term family travel outweigh the costs.

While I've never hit the road with my family for 18 months like Shawn has, I have taken a few trips in the three weeks to two months range. Here are some of my suggestions:

1. Look for shoulder seasons. On shorter trips, most families are forced to work around their children's school schedules, yet ironically you have more freedom on longer trips. For example, Shawn has taken his son out of school for just the first two weeks in September, when most classes are just rehashing what they learned last year. We have both found that September is a great time to travel, as it's a low tourist season, but there's still great weather. Considering that September is the shoulder season in much of the world, it's an inexpensive time to travel, and an especially good season to redeem point and miles.

2. Consider buying an air pass. All three major airline alliances offer air passes that can be used in conjunction with both paid and award tickets. The advantage is that trips are booked at a flat rate depending on the number and distance of flights taken, and that there is no advanced purchase requirement.With Star Alliance and SkyTeam passes, you only have to book the first flight, and you can leave the rest of your itinerary open-ended. With Oneworld's air passes, you must state all your destinations at the time of purchase (before departing your country of origin), but you can still travel at your own pace and book flights as needed. To learn more about air passes, check out this post that I put together in July.

3. Watch out for fatigue. As Shawn pointed out, fatigue can really damage a travel experience. When people get hungry, tired, or exhausted, they get irritable and can have a bad time. While this can happen on shorter trips too, families are much more vulnerable on longer trips where they haven't been home to recharge in weeks or months. Shawn and I agree that that you have to schedule in some down time to recover. For me, this means a quiet, comfortable destination where I can unpack, do laundry, and make a few phone calls to loved ones back home. Even something as simple as getting a haircut can go a long way toward changing your attitude. Whatever down time means to you, make sure your itinerary can accommodate it.

Have you taken extended family vacations? Please share your thoughts and experiences in the comments below.

Featured image by Air travel passes can help you explore a region of the world for less than the cost of purchasing individual tickets.