Domestic Airport Updates to Get Excited About! 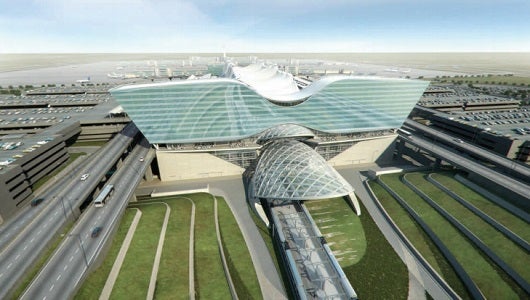 Domestic Airport Updates to Get Excited About!
This post contains references to products from one or more of our advertisers. We may receive compensation when you click on links to those products. Terms apply to the offers listed on this page. For an explanation of our Advertising Policy, visit this page.

Just like the planes that serve them, some airports are in better shape than others. Today, TPG Contributor Jason Steele shows us some U.S. airports that are undergoing improvements, and a few more that should be.

America gets a lot of criticism for having outdated airports. Certainly not every city offers the equivalent of Singapore's Changi Airport (which has won dozens of awards for being the best airport in the world), but some of our airports are now undergoing dramatic renovations and expansions that will allow them to handle additional passengers with greater convenience and better amenities than ever before.

Here are four American airports that are leading the way:

1. Denver International Airport
Denver International, or DIA as the locals call it, already boasts many superlatives. Having opened in 1995, it's the newest major American airport, the largest American airport in terms of land mass, and it has the longest public use runway in the United States. Yet arriving passengers often remark that the airport appears to be in the middle of nowhere, and the nearest hotels are at least seven miles away.

Over the past three years, the City of Denver has been hard at work correcting these oversights in an otherwise state-of-the-art facility. A fast commuter rail line is mostly complete that will speed visitors between the terminal and downtown Denver's newly renovated Union Station in under 35 minutes. Above the airport's train station, a new 519-room Westin hotel will offer soaring views of the Rocky Mountains, the eastern plains of Colorado, and the airfield itself.

I recently had the opportunity to tour the construction site with the city's Program Manager Stu Williams. The overall impression I got was that this project encompasses far more than just a new airport hotel and train station. The hotel contains a convention center large enough to accommodate up to 2,000 people, and there will be a public outdoor plaza between the terminal and hotel that's larger than a football field.

The plaza has been designed to accommodate events such as concerts, classic car shows, and even food trucks. The idea is that Denver residents will actually want to visit the airport, even when they're not traveling. By Denver law, 1% of the project's budget must go to fund public art, and three very large installations are planned by prominent artists.

In fact, even the rooms in the Westin hotel will feature works by Colorado artists, rather than the stock posters that are typically used. However, I'm not sure guests will notice the art first, as the entire hotel is enclosed by what architects call a "curtain wall" of glass, meaning that every exterior surface is a window, and the views are stunning.

In addition, the train station will be configured to offer passengers the fastest and most convenient possible access to the terminal in order to speed them to their gates. Train passengers will be able to check their bags on the arrival platform before hopping onto a single escalator that will take them directly to the nearest TSA security checkpoint. By my estimation, this process will be significantly faster for train passengers than for those being dropped off by car. The hotel, convention center, and public plaza are scheduled to be completed by November of 2015, while the train service is will launch in the spring or summer of 2016.

2. Fort Lauderdale-Hollywood International Airport
For decades, the Miami airport served as the primary international gateway to South Florida, while the Ft. Lauderdale airport was seen as a less convenient alternative at best. Those days are no longer, as Ft. Lauderdale has seen its service increase dramatically, especially among low-cost carriers.

To accommodate all of these new passengers, the airport has begun a 2.3 billion dollar expansion. First, it constructed a new $791 million, 8,000-foot south runway, which opened on September 18 of this year. (That's nearly $100,000 a foot, but who's counting?) Part of this new runway is actually a six story high bridge over train tracks and Federal Highway U.S. 1. Next up, Terminals 1, 2, and 3 will be modernized, while Terminal 4 (which handles international service) is being completely rebuilt.

All of these projects are set to be completed by 2017, yet Broward County still hopes to keep costs low. It expects to maintain its low-cost carriers by charging airlines just $6.51 per person in 2017, while nearby Miami currently charges $20.33.

3. Chicago O'Hare
Chicago once enjoyed the status of the busiest airport in the world, but it lost that title back in 1998, and has since fallen to number five on the list. With its ad-hoc terminal expansions and its seemingly random array of runways, the once great airport just couldn't keep up with its more modern competitors, but you'd be mistaken if you thought that The City of Broad Shoulders would recede into the backwaters of aviation.

The 8.7 Billion Dollar O'Hare Modernization Program is now in its second decade, and is starting to pay off. O'hare can now operate four parallel runways simultaneously, up from just two previously. The next stage is for six parallel runways and two diagonal to the rest.

This next stage of runway configuration, appropriately called Completion Phase 2B, depends on additional funding if it is to be, or not 2B (insert comedy drum fill here). Another terminal on the west side of the field has also been planned for the next decade.

4. Honolulu International Airport
Perhaps the most unique thing about this island airport is that its terminals are open air facilities, so you can feel the ocean breezes and smell the jet fuel. What Honolulu International has in common with so many other airports is its need to expand to accommodate demand. To do so, two new concourses are now under construction.

Some airports changes that need to happen!
Unfortunately, not every airport is keeping pace with the times. Here are some facilities that need to take a hint and start moving towards the future:

1. Las Vegas
McCarran Airport isn't that bad, but it squanders its great location by making it incredibly hard to get in or out of. The consolidated rental car facility is a long shuttle ride across the runways from the terminal. The city also has an expensive monorail system on The Vegas Strip, but it stops short of the airport! Plans to connect it have been stalled for years, and waits for a taxi often exceed the length of the ride.

2. New York - La Guardia
This is the airport that everyone loves to hate. You can cite its lack of subway service, its narrow concourse, or its leaking roofs, but there's nearly unanimous agreement that it needs to be replaced. Thankfully, there is now at least a plan to rebuild it that looks good. That said, I'll probably make even greater efforts to avoid it during the seven years it will take to rebuild.

3. Washington Dulles
Where to start? The cramped "temporary" concourse built decades ago? The people mover system that dumps you off where the future "permanent" concourse may be built some day? Perpetually long waits at security and immigration? How about the Metro train to the airport that always seems to be opening about five years from now? There seems to be very little focus on passengers at this much derided facility.

What airport changes are you looking forward to? Share your thoughts in the comments below!
[card card-name='The Amex EveryDay® Preferred Credit Card from American Express' card-id='220310489' type='javascript' bullet-id='1']

Related stories
Save money with these travel-related offers on your credit cards this month
Use these shopping portal bonuses to earn extra miles this holiday season
Using miles and points to book airline tickets and hotels for others
Maui magnificence: A review of Kaanapali Alii, a Destination by Hyatt Residence
Featured image by What the new Westin hotel and transit center will look like when it is completed in November of 2015.