A few months ago I wrote about how the next award chart sweet spot I wanted to use was via Star Alliance partner ANA as you can get to the Caribbean and back from many cities in the United States for only 22,000 miles round trip.  Even better than that, you can even have multiple free stopovers in some situations!  Recently the situation presented itself to put this sweet spot into action as we have a wedding to attend in Jamaica next year, so I’ll talk you through what we did and how to take it even further than that all for a fraction of the mileage price that the US airlines charge.

ANA has a distance based chart:

ANA utilizes a distance based award chart similar to British Airways which means that shorter flights are going to cost a relatively small number of miles.  Even if you have never flown on ANA you can still take advantage of this award chart sweet spot since ANA is a 1:1 transfer partner of the American Express Membership Rewards program.

Their stopover rules are a little confusing at first, but somewhat outlined here.  Here are a few award ticket rules and tips.

How to use the ANA award booking tool:

The ANA online booking tool is very good in some respects, but a little clunky and awkward in others.  If you have 0 miles, read this post for how to use their search tool.  None the less, it is at least functional for searching and booking Star Alliance partners like United.  Availability should be the same for United award flights as United offers its own members at the Saver level (though not the extra availability that United sometimes gives elite members or those with the co-branded credit card).

To search for a more complex routing use the “Flight Search” option as you can have up to 12 sectors/segments here instead of just searching a simple round trip.

For the Caribbean and Central America specifically I looked at United’s route network as well as that of Star Alliance partner Copa to put together a way to visit a few different destinations.  Copa flights will go through Panama City, so that is a good way to go through Panama and then go on to another destination in the area before returning to the United States.  If you don’t actually want to stay in Panama, you can just connect there and then shoot back to another Caribbean, Central American or Latin American destination before heading back to the US. 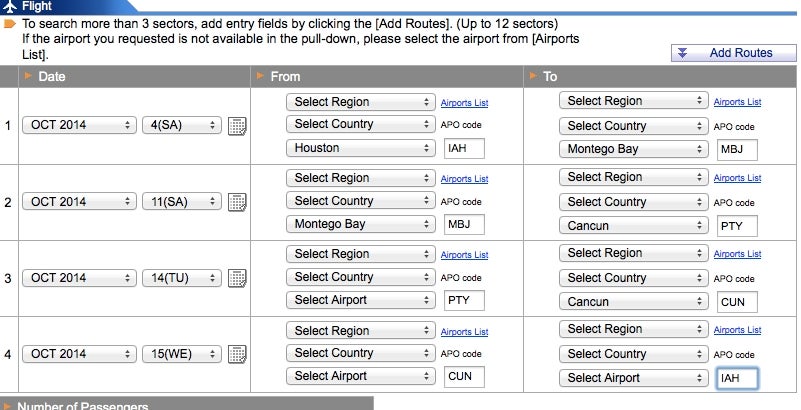 For example, if we wanted to maximize the wedding we are attending in Jamaica we could fly from Houston – Jamaica – Panama City – Cancun – Houston and stop in each point for however long we wanted along the way.  That is just an example as you could put together something entirely different.  You can also make use of an open-jaw and go from say Houston – Montego Bay (open jaw – book your own flight elsewhere) Grand Cayman – Panama City – Cancun – Houston.

You select each segment individually and select the flight that best meets your needs. 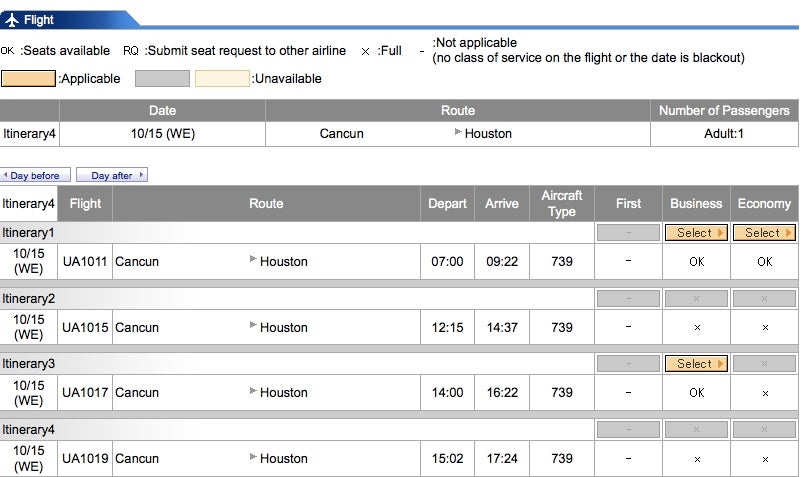 Useful even if your home airport isn’t close to the Caribbean:

Obviously if you aren’t starting from somewhere like Houston that has many nonstop flights to the Caribbean and is already geographically close, then you won’t be able to squeeze as much out of the 2,001 – 4,000 mile range, but there is still value to be had.  For example, Newark – Aruba – Newark is pretty far in terms of Caribbean flights and it is still just under 4,000 miles flown round trip.

If I was flying on Star Alliance partners using United miles to the Caribbean it would cost 35,000 miles round trip and you wouldn’t have the same level of flexibility with multiple stopovers that you have with ANA miles.  Assuming you value United miles and Membership Reward points at around the same amount (and I do), that is a savings of 37% miles/points just by being aware of different award charts.

Have you utilized ANA miles to save big while heading to the Caribbean?

Summer Hull , aka Mommy Points, ran the Mommy Points site for families who want to travel more for less using miles and points for seven years. She now heads up a variety of special projects at TPG when she isn't exploring the world with her own two girls.
You might like
Onboard Etihad’s 1st Airbus A350 flight to the US, featuring a new business-class product
News
46m ago
Accor wins big as IHG loses Six Senses New York project
News
Yesterday
British Airways cancels 650 flights from UK to other European destinations this July
News
Yesterday
Delta SkyMiles® Platinum American Express Card