I get questions regularly about what type of seating arrangement is most comfortable and practical for a traveling family with a child under two who does not yet require their own seat.  I received this question again this week and thought I would share the situation and my suggestions in case they are helpful for anyone else thinking through a similar situation.  Of course, I’m most interested in hearing what your family would do – and why!

The family who emailed me recently had their first baby and plan to fly St. Louis – Los Angeles – Kauai on American Airlines when the child is six months old.  They have a seven figure balance of American Airlines miles and are looking for the best seating arrangement for the three of them.  Miles are not a problem, but instead they are simply looking for the “best” solution for their new family of three.  They were picking between getting each person their own first class seat, getting two first class seats and holding the infant, getting three economy plus seats, or getting two economy plus seats and holding the baby.

There are pros and cons to all four situations, many of which may be obvious, but that I’ll go through them just for fun.  Depending on their travel dates and award availability issues they are looking at from 35,000 – 45,000 AA miles round trip for each confirmed seat to travel in economy or 75,000 AA miles for each confirmed seat for first class in a two cabin plane (assuming MileSAAver availability).  For the purposes of this exercise I will assume the economy tickets were 45,000 miles each and the first class seats were 75,000 miles each.

Coming to a recommendation:

Since they have a healthy mileage balance and don’t mind spending the miles I would immediately rule out getting just two economy seats as it is clearly the least comfortable of all four scenarios.  I would next rule out getting three first class seats as it just seems unnecessarily expensive on miles without having a good return for what you get.  If the seats were lie-flat seats, or the infant was a toddler who was less happy to sit still, or their family had an even number of people in it, then my recommendation here might have been different, but this just didn’t seem like the best option to me personally.

Ultimately I think the decision in this case comes down to two first class seats or three economy seats.  I think that is actually a decision that lots of new traveling miles and points parents have to make.  I know, I know, #firstclassproblems.  Those two scenarios are similarly priced in terms of miles with the slight edge going to three economy seats at being at least 15,000 miles cheaper.  I think which option is best can obviously only be made by the parents who know their own child, their own preferences, and their own risk tolerances of having or not having a car seat in use on the flight.  I think some snuggley six-month-olds who are being cared for by parents (who like to take turns holding the little one for hours at a time) may be most comfortable with two first class seats.

However, I know that my family would have done best with three economy seats, and ultimately that was my recommendation.  Having the whole family together in one row is very helpful for the first big trip with a little one.  Having the kiddo securely strapped into their own car seat is helpful in terms of having your hands free, but also gives peace of mind if you hit a patch of nasty turbulence.  The under seat storage for three seats is also helpful for the baby toys, diaper bag, emergency changes of clothes, etc.  Though of course some bulkhead seats do not have any under seat storage, so think about that trade-off before selecting the bulkhead. 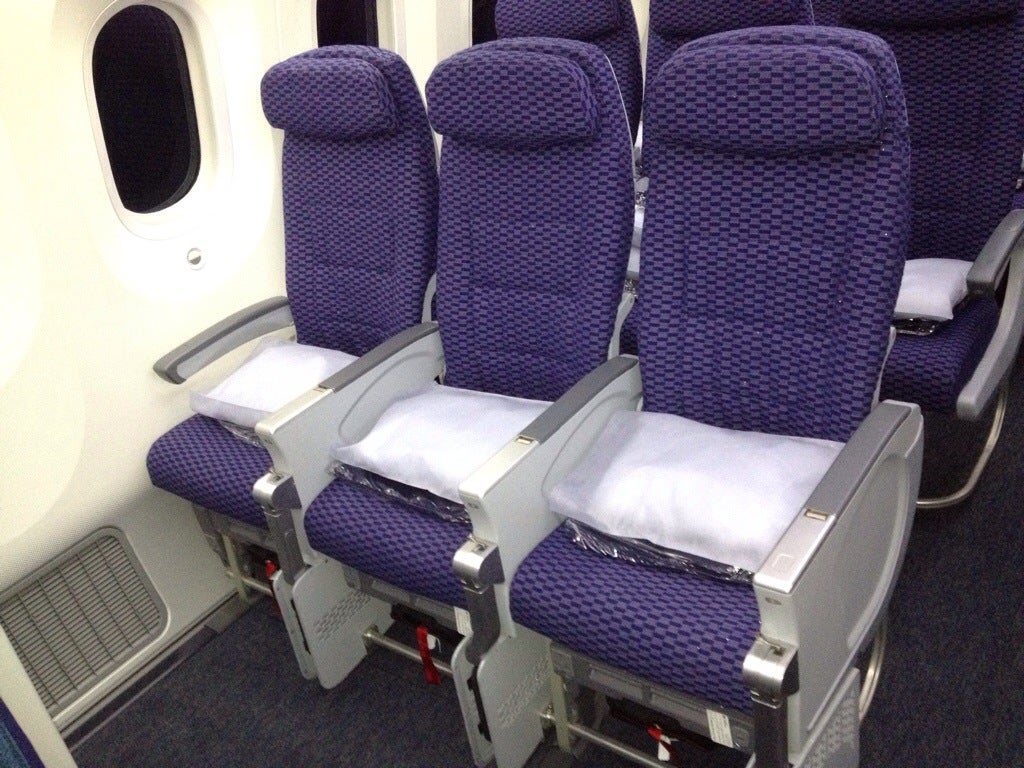 My recommendation was to get three economy seats together with extra legroom, and ultimately that is what the family did.  I just didn’t see being in that particular first class cabin with a six-month-old to be worth the additional miles since the layout puts you all further apart from each other.  First class wouldn’t have been a bad choice, but it wasn’t my first choice in this scenario.

I’m curious as to what you would have done in this situation and why?

Summer Hull aka Mommy Points, ran the Mommy Points site for families who want to travel more for less using miles and points for seven years and now heads up TPG Family when she isn't exploring the world with her own two girls.
You might like
I just boarded the first Royal Caribbean cruise in North America in more than a year; here’s what it was like
News
11h ago
5 things I’ve noticed since I started flying again
News
Yesterday
Flying with world leaders: How pilots land big aircraft into small airfields
News
Yesterday
Chase Sapphire Preferred® Card

Top offers from our partners
How we chose
✕
How we chose these cards
Our points-obsessed staff uses a plethora of credit cards on a daily basis. If anyone on our team wouldn't recommend an offer to a friend or family member, we wouldn't recommend it on The Points Guy either. Our opinions are our own, and have not been reviewed, approved, or endorsed by our advertising partners.
Learn More Terms Apply
Capital One Venture Rewards Credit Card
Current Offer
Up to 100,000 bonus miles
Learn More
Terms Apply
Learn More Terms Apply
The Platinum Card® from American Express
Current Offer
Earn 75,000 points
Learn More
Terms Apply
TPG Exclusive Offer
Learn More Terms Apply
TPG Exclusive Offer
The Business Platinum Card® from American Express
125,000 bonus points
100,000 points