Articles
Nick Ewen is a director of content at TPG and was one of the site's first contributors in 2012. He’s visited 52 countries (and counting) and has taken his 7-year-old daughter to 24 of them.
Follow
July 31, 2014
•
9 min read 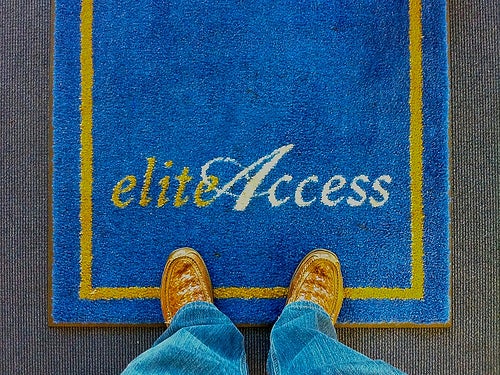 Count Change Fees as MQDs/PQDs - the Weekly Wish
This post contains references to products from one or more of our advertisers. We may receive compensation when you click on links to those products. Terms apply to the offers listed on this page. For an explanation of our Advertising Policy, visit this page.

Today TPG Contributor Nick Ewen continues his series The Weekly Wish, looking at flaws, shortcomings, and room for improvement in the world of travel and loyalty programs. Today’s wish: count change fees towards elite qualification on United and Delta.

It sure seems like 2014 has been the year of the “$” in the frequent flyer world. Delta started the ball rolling last January by announcing Medallion Qualification Dollars (or MQDs) as a new requirement for elite status. Not to be outdone, in June, United added a similar requirement: Premier Qualifying Dollars (or PQDs). Both of these new thresholds went into effect this year, meaning that miles and/or segments are no longer the only way to earn (and/or retain) elite status on two of the largest carriers out there.

Determining what counts towards the MQD/PQD requirement isn’t always clear. What about bag fees? Economy Comfort/Plus purchases? Do fuel surcharges count? What about travel on partner airlines? Answers to these questions can be found here for Delta and here for United, but even with that information, I believe that there's a glaring omission in the policies of both carriers. That brings us to today’s Weekly Wish: change fees should count towards revenue-based qualification thresholds on both United and Delta.

Before we get into that, here’s a quick rundown of these new thresholds:

In other words, both airlines are essentially saying that your tickets need to cost at least 10 cents/mile (or $83.33/segment) in order to earn status that in prior years would have been awarded just by flying.

One one hand, I can see why these two carriers are implementing such policies. Airlines are a business, and their goal is to make money. The number crunchers in Atlanta and Chicago realized that their most profitable passengers might not be getting the most benefits when flying, so they attempted to change that. Remember too that both Delta and United are changing to revenue-based models of awarding miles next year; even though these announcements came long after the MQD/PQD announcements, they're another big step in the direction of rewarding for dollars spent rather than miles (or segments) flown.

Here’s where I take issue with the MQD/PQD policies. If the goal really is to reward profitable behavior, then change/cancellation fees should absolutely count towards these new qualifications. I think we can all agree that change fees are not based on any kind of reality; if I book a non-refundable ticket and need to change my departure date more than 24 hours after ticketing, I can say with absolute certainty that it will not cost Delta $200 to make that change for me, even for last-minute changes. Instead, these fees represent a giant profit engine for airlines, totaling over $2.8 billion in 2013 alone!

Not surprisingly, Delta and United topped that list, each collecting over three-quarters of a billion dollars in change fees. Travelers who regularly change their plans are driving Delta and United to profitability, and I strongly believe that they should be rewarded accordingly. Let’s look at a couple of sample scenarios to put some numbers into play:

1) Flyer A consistently books Delta flights at least a month in advance to secure the best prices. His/her flying pattern looks like this:

Now let’s assume that you have the exact same stats, with one key difference: five of your trips are postponed and then rescheduled for another date. In other words, you need to change five of the 20 flights at a cost of $200 per change. You and Flyer A end the year with the exact same number of MQDs, even though you've given Delta $1000 of additional revenue through change/cancellation fees. In this case, those lost MQDs prevent you from attaining Platinum Medallion.

2) Flyer B is a little bit different, usually waiting to book United flights until 2-3 weeks before departure. His/her flying stats look like this:

Now let’s say that you try to plan in advance, booking your same 20 trips over a month ahead of time. However, you again wind up needing to change five of those trips, costing you $200 each time. Your average fare class and PQDs per trip winds up being identical to Flyer B. Just like the first scenario, your extra $1000 doesn’t count, and in this case, you miss out on qualifying for 1k.

I’ll be the first to admit that these scenarios are far-fetched; what two travelers truly have the exact same flying behavior in a given year? However, I use these examples to illustrate that many travelers have to change their plans during any given year. Since these change fees are going directly to an airline’s bottom line (and since the MQD/PQD policies were implemented with the express purpose of rewarding profitable customer behavior), they should be factored into the status qualification equation.

If you’d like a real-world example, consider a trip I took from Florida to North Carolina last month. Two weeks before departure, I found out that three days of meetings were reduced to a single day. I immediately changed my flights, and I was rebooked into the exact same fare class at almost the exact same fare (my new one was $0.16 cheaper). I only earned $294 MQD’s despite charges totaling $568.27. Delta had two weeks to resell my vacated seat and took a $200 change fee. My MQDs, meanwhile, didn’t budge. In fact, I have paid $600 in change fees so far this year (and just today learned that I will likely have another $200 coming up). As of now, it looks like I won’t have any trouble requalifying for my desired level of status, but if counting these change fees will make a difference, you can bet that Delta will be hearing from me.

Keep in mind that there are ways to get out of the new MQD/PQD requirements: credit card spending. Delta Medallion members would need to spend $25,000 this year on a co-branded American Express card like the Gold Delta SkyMiles Credit Card from American Express. This applies to all levels of status. United, on the other hand, is a little stricter. Members can get out of the PQD requirement by spending $25,000 on MileagePlus cards (like the United MileagePlus Explorer Card or United MileagePlus Club cards), but this only applies up to Platinum Premier. There is no waiver available for 1k.

It’s important to realize that we are still in the very early phases of the revenue-based elite status qualification model. I wouldn't be surprised to see some tweaking and/or fine-tuning of the thresholds and other aspects of Delta and United’s programs as this first year comes to a close. Counting change and cancellation fees would be a simple (and obvious!) first step.

What do you think? Should change/cancellation fees count towards MQD/PQD thresholds? If so, do you think we'll see a change anytime soon? Please share your thoughts in the comments below!