Alaska isn’t stuffed with tons of hotels that are good points redemptions, but there are a few exceptions, and one is the Sheraton Anchorage Hotel & Spa.  We just completed an overnight there after a nighttime arrival into Anchorage, and found it to be an overall good experience and a solid value on points since cash rates in Alaska at full service hotels can be very high during the peak summer season.

We are doing things a little differently on this trip and I’m trying to share some of the information shortly after it is happening rather than sit on it for a month or two and potentially forgetting a few of the details.

The Sheraton Anchorage Spa and Hotel was about a 15 minute drive from the airport.  It is located downtown on a street that also houses a diner, Pizza Hut, the Anchorage Museum, and an FBI building.  It isn’t the most scenic location in the world, but it was very nice to be able to walk to the Anchorage Museum! 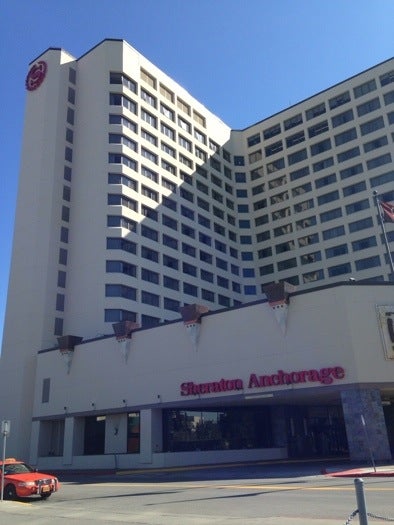 The hotel has 370 rooms on 16 floors with 16 Junior Suites and 2 luxury suites.  It is non-smoking and pet friendly.

There was no bellman or valet parking when we pulled up, but there was an attached garage that we parked in for the night.  The posted overnight rate was $10, but we ended up not being charged for parking which was a happy surprise.  The lobby itself was nice with a fountain, fireplace, snack area, fruit infused water, etc. 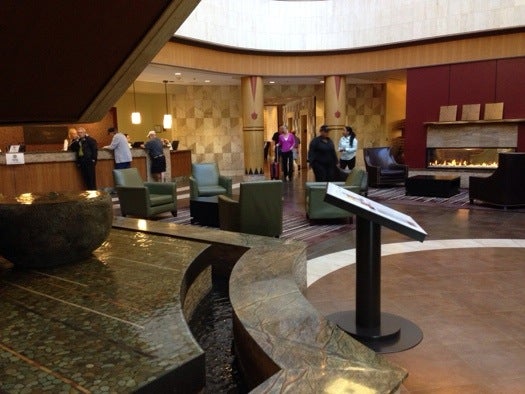 I had called earlier in the day to try and get a king room instead of the double we had booked on points.  At check-in they confirmed the king room but they didn’t mention the junior suite upgrade!  Note that I just have SPG Gold status, so I certainly wasn’t expecting the upgrade.

We had a room on the 4th floor right next to the elevator.  As I mentioned it seems we ended up with a Junior Suite, so there was ample room for my four year old and me.  There was a sitting area with a chair, coach, TV, work desk, and mini fridge. 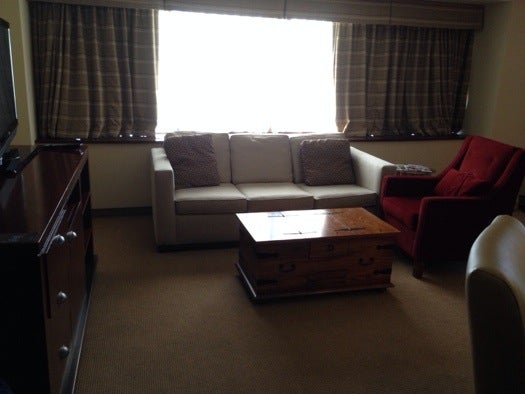 The bedroom area was connected as it was a junior suite.  There was a king bed as requested and lots of windows.  This became a problem later.  The bed itself seemed fine, but the sheets and duvet were a bit stiff and not my favorite. 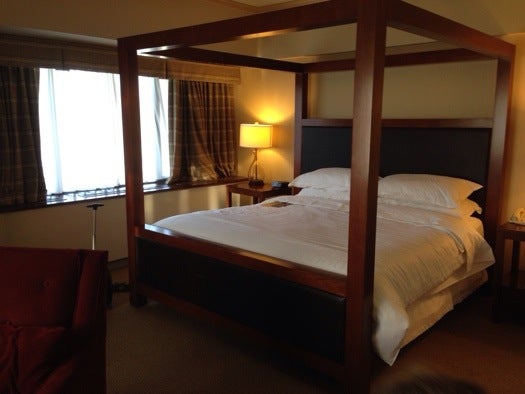 The elevator noise didn’t end up being a problem, but there was a good amount of street noise from below and I could hear very well into the adjacent room when their toilet would flush, alarm went off, etc. 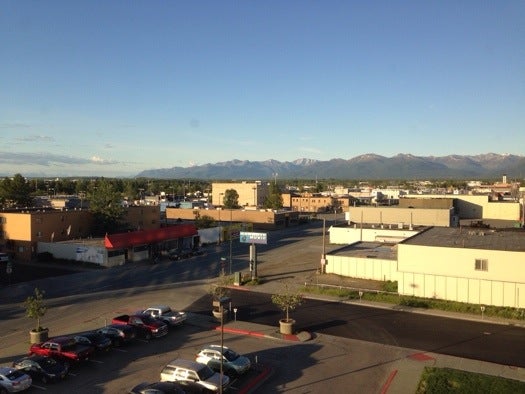 The windows worked against us since sunset isn’t until close to midnight in Anchorage in the summer, and then it’s back up by around 4:30AM with hours of twilight in-between.  The blackout drapes helped, but it there was plenty of light sneaking in that my kid was very much aware of.  She typically rises with the sun, literally, so this is throwing her for a loop! 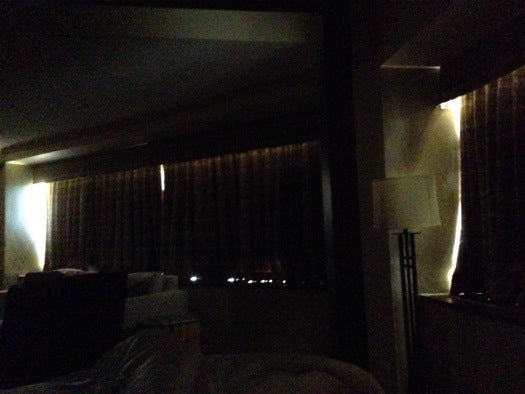 The internet was about $10 a day, but free with my Gold status.  It worked, but was on the slower side of working.  There were two free bottles of water in the room for being a SPG member.

The bathroom was a tub/shower combo that did the job.  The bathroom, and hotel in general, are basic but a tad upgraded over some Sheraton Hotels I have visited. 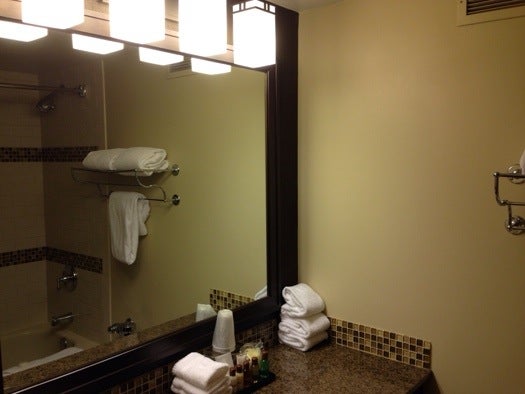 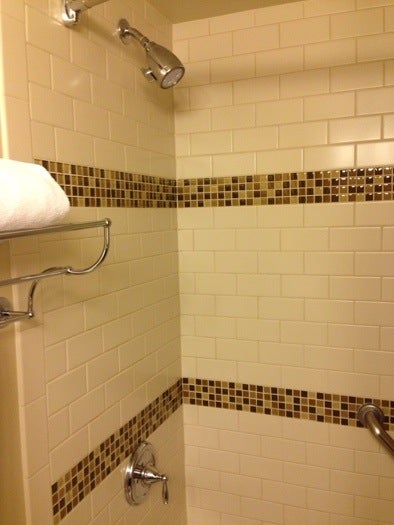 My kiddo was a little hungry after not loving the airplane food on the way into Anchorage, so we ordered a kid’s PB&J meal that came with the sandwich, drink, side of fruit, and ice cream all for about $10 delivered.  Yes that’s a bunch for a PB&J, but not a lot for room service delivered.  The only interesting part was the DIY nature of the sandwich with the peanut butter and jelly packets.  I guess in Alaska, you gotta do things yourself! 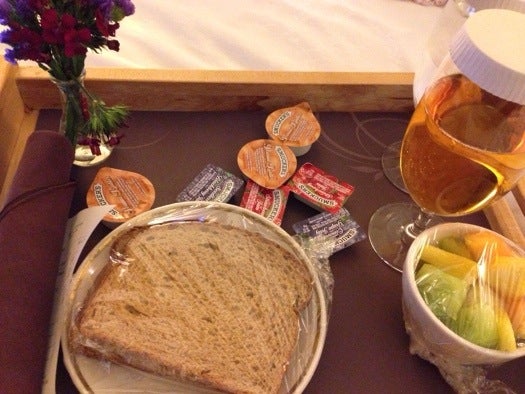 For breakfast we ate at the Jade Steak and Seafood Restaurant downstairs.  We passed on the $18 buffet, but instead ordered pancakes and a  fruit parfait off the menu for about half the price.  The service was very friendly with lots of juice and coffee refills, but the food was a bit slow to come out. 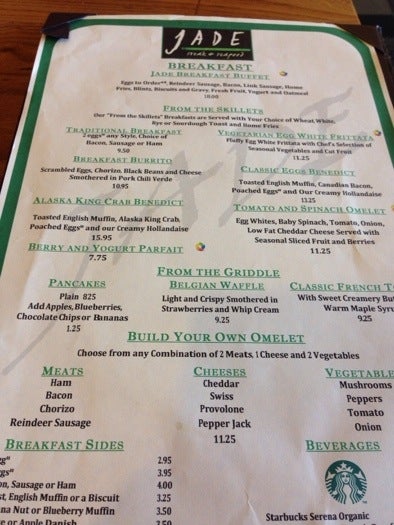 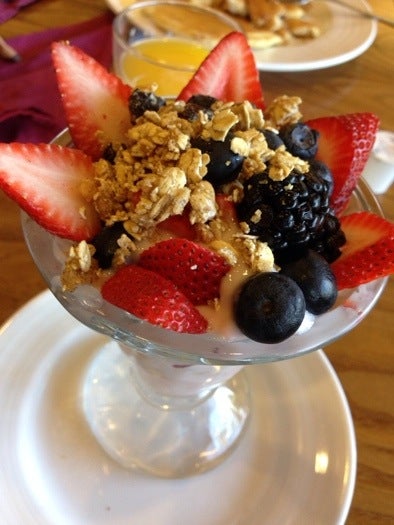 It wasn’t award winning food, but was totally decent for an easy breakfast.  What impressed me the most was when we ended up forgetting our iPad at breakfast in the restaurant, and when we returned to the room we had messages waiting letting us know it was found and waiting for us!  We loved our server before breakfast was over, but loved her even more after that. 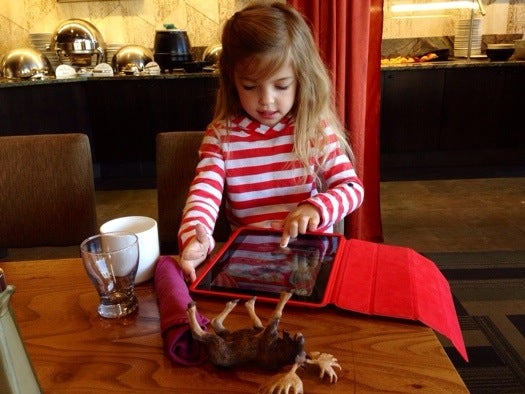 The hotel also has an Ice Spa and Salon that I would have loved to try out, but traveling solo with a four year old pretty much puts a damper on that possibility, so I can’t comment on those facilities.  Here is a link for more info.  There is also an Executive Club Lounge for those who get Club rooms and/or have SPG Platinum status.  We had neither so didn’t get to check the club out on this visit.

When I booked the Sheraton it was a Category 3 at 7,000 SPG points per night, but earlier this year it went up to a Category 4 Starwood Preferred Guest Hotel at 10,000 SPG points per night or 5,000 points + $75 for a cash and points reservation.  However, right now I don’t see a single cash + points night available at this hotel through the end of the schedule!  Summer going rates for this hotel are usually north of $200 and often approaching $300 per night, so even at 10,000 SPG points you are likely getting close to 3 cents in value per point during peak season.

Update: The Sheraton Anchorage is again going down to a Category 3 SPG property in March 2018.

At the old rate of 7,000 points per night I got a great deal, but even at the current price of 10,000 points per night I would stay at this hotel using points again if I needed an overnight in Anchorage: the room was fine, the upgrade was both nice and unexpected, and the service was excellent.  Just be sure to bring an eye mask to keep out the sun!

Summer Hull aka Mommy Points, ran the Mommy Points site for families who want to travel more for less using miles and points for seven years and now heads up TPG Family when she isn't exploring the world with her own two girls.
You might like
The US reopens to international travelers on November 8 — what you need to know
News
9h ago
I just got a tattoo on a cruise ship — here’s why you should, too
News
10h ago
How this perk works: The Chase Sapphire Preferred 10% anniversary points bonus
News
11h ago
Delta SkyMiles® Platinum American Express Card