Our recent Alaskan family adventure was absolutely amazing, and if your family is adventurous, enjoys nature, or wildlife, or awesome views, then you seriously need to plan a trip to Alaska.  You probably won’t want to do your entire Alaskan adventure using miles and points since there are some pretty neat non-chain places to stay, but you can certainly do a portion of your journey using miles and points to keep costs down.  One of the places we used points was at the Holiday Inn Express Seward, so here is our review of that hotel.  If you want to catch-up on this adventure here are some previous posts.

Flying Seven Hours with a Kid to Alaska

Don’t Wait Until You are Retired to Visit Alaska

We drove the two hours or so from Anchorage south to Seward along what is easily one of the most beautiful drives in the country.  You could also opt to take the train along basically the same route, but for our purposes a rental car worked the best.

When you arrive in Seward the Holiday Inn Express is pretty easy to find as it is blue and in the small downtown right on the water.  There is free parking for hotel guests, but they will ask for your make/model/license plate number as well as give you a parking permit for your car while you are there.  Be ready with that info so you don’t have to run back and forth to the parking lot more than necessary. 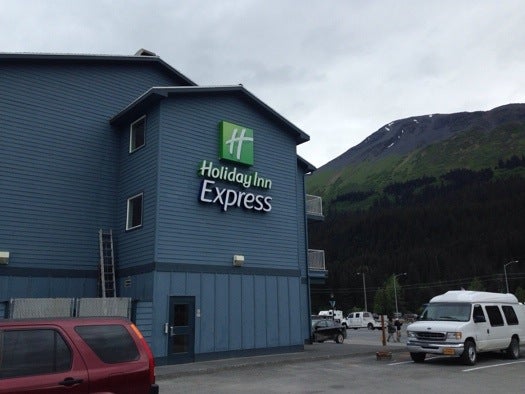 Otherwise check-in was pretty uneventful and we were told about the internet password and the hours for the free breakfast in the morning.  The room with a balcony that we had secured was confirmed at check-in, though I quickly learned that room type might have been an error on my part.  You really can’t argue with the beautiful view though!

We had a king room with a harbor view and a balcony.  As I pointed out in this post, this was one of those times that a room type that costs more to secure with cash didn’t cost any more with points.  The room itself appeared fine and pretty standard for a Holiday Inn Express room, which was all we were after.  The mattress was a little hard, but we found the sheets and pillows soft and cozy. 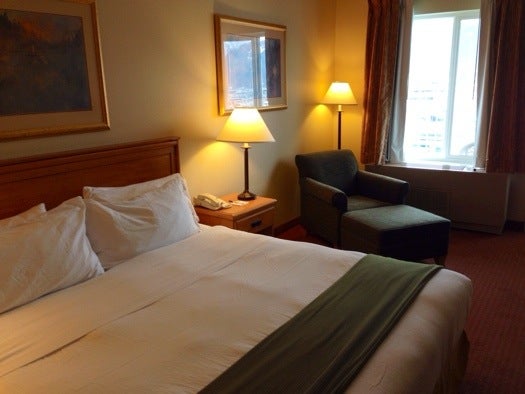 As a family traveler I appreciated that there was a mini fridge and a microwave in the room as that can keep the costs for snacks and even small meals to a minimum by having some in the room.  The internet signal at the hotel was not fantastic, but it was decent enough for occasional light use.  Just don’t try writing blog posts and uploading lots of photos or you may go bananas! 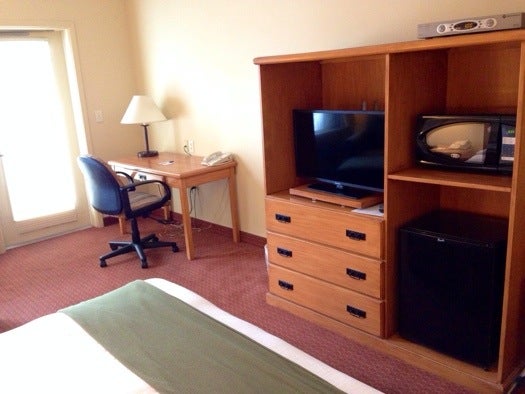 I will point out that there was a room that was literally inches from the elevator, so if noise is an issue I would really be sure to not get that room.  Noise wasn’t a huge issue in our room that was further down the hall, or perhaps we were just too tired at this point in the trip to notice.

The bathroom had a tub/shower combo and lots of counter space compared to some similar rooms I have stayed in.  It was clean and totally functional.  There were the standard toiletries plus a packaged make-up remover cloth which I always appreciate.  I wish more hotels would add that to the list of regular bathroom amenities. 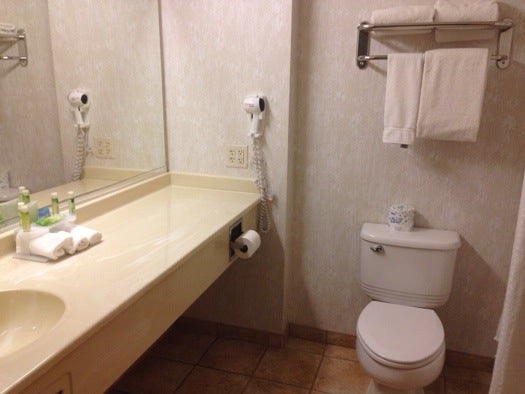 Our only issue with this hotel was the light at night.  As you probably know, in the summertime it is light in Alaska for almost the entire night.  Even when it is “dark” it isn’t really that dark.  I foolishly assumed that hotels would account for this by having good blackout drapes the way that Las Vegas does for those who party a bit late in the evening.  Nope.  None of the places we stayed had great blackout drapes, and this particular hotel had none on the glass balcony door.  All it had were some white flimsy mini blinds that let in tons of light. 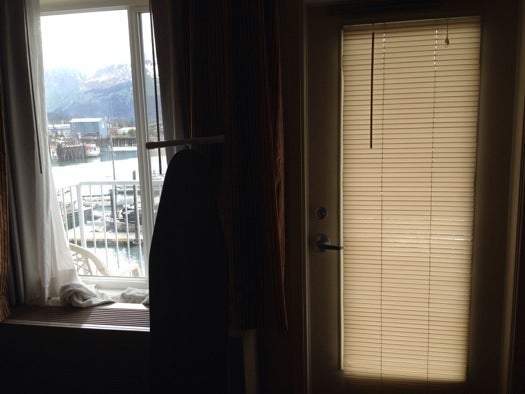 I have an eye mask, but my four year old isn’t exactly used to sleeping with a mask over her eyes, so I had to get creative and build my own shade using what was in the room.  I took the desk chair, luggage rack, ironing board, and blanket to build this contraption. 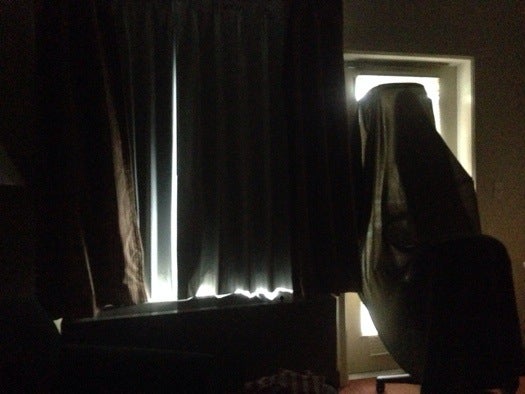 I eventually added some pillows at the bottom to plug some of the holes and we had a much darker room that we did before I built the “light blocker monster” as C called it.  We were both worried it would come down at night in a loud crash, but it held up just fine.  It wasn’t perfect, but it was an improvement.  The picture above was taken at 10PM at night, and I can tell you that midnight didn’t really look any different.  I truly have no clue why hotels don’t spend the few bucks it would cost extra to keep the light to a minimum at night.

A perk at the Holiday Inn Express chain is free breakfast for everyone, and we were happy to take part given how expensive food can be in Alaska.  As is standard at this chain, breakfast is a self-serve buffet and consisted both of some cold items like yogurt, hard boiled egg, fruit, and cereal as well as hot items like biscuits, gravy, pancake machine, eggs, sausage, and even cinnamon rolls.  I can’t say our breakfast was the most healthy breakfast ever, but it tasted pretty decent. 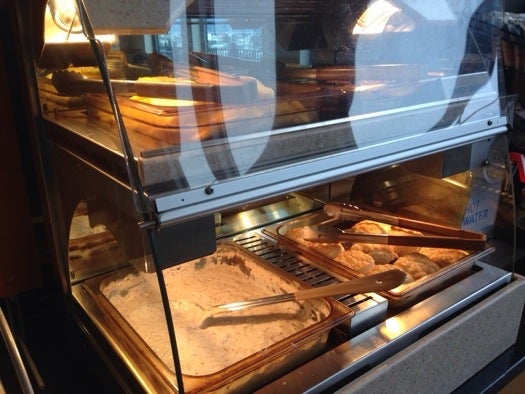 My kid was full, happy, and ready for a day of adventures so that is all that mattered on this particular day! 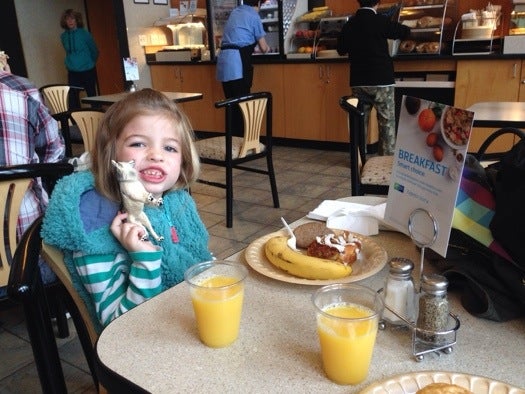 As an added perk, the breakfast is in a very bright and open atrium that overlooks the water.  Can’t beat free breakfast with a view! 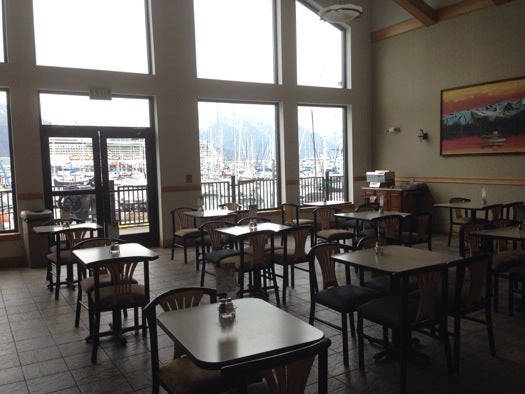 The hotel had a small indoor pool and hot tub that we did not use on this visit.  As indoor pools sometimes do, it smelled very strongly of chlorine and chemicals when we briefly stuck our heads in to check it out, so we probably would have passed even if we had packed our swimsuits.

This hotel can easily be $300/night during the peak months, so using points is a smart option.  Even on points it isn’t super cheap since it requires 35,000 points per night, but there are lots of ways to get IHG Rewards Club points.  One easy way to get them is via the IHG Chase Credit card that can have sign-up bonuses up to 80,000 points.  You can also buy IHG points right now via the Daily Getaways for a little over 1/2 a cent each.  That means that 35,000 points will cost the equivalent of about $200/night at that price.  That isn’t an amazing deal, but better than the cash price during peak nights.  Of course if you can just get the points almost free via the credit card, or already have them thanks to IHG promos and stays that is an even better deal.

Other than the blackout drapes issue which seems to be shockingly common in Alaska, this hotel was great for what it was.  The staff were all super friendly, parking was simple and included, breakfast was free, the view was great, and it put us where we wanted to be for our one night stay without breaking the bank.  The hotel is within walking distance to everything in downtown Seward and I found that many tour companies that are a bit out of downtown will send a shuttle for pick-up if you ask.  If I were to visit again I would actually want a room without a balcony as there would be fewer light issues to deal with, but regardless I would not hesitate to return.

Summer Hull aka Mommy Points, ran the Mommy Points site for families who want to travel more for less using miles and points for seven years and now heads up TPG Family when she isn't exploring the world with her own two girls.
You might like
From palm reading to po’ boys, Carnival brings French Quarter vibes to its latest cruise ship
News
8h ago
No gear? No Problem: How one company is making camping more accessible with its rental service
News
Yesterday
I’m waiting until 2022 to plan my next big trip — and not just because of COVID-19
News
Yesterday
Delta SkyMiles® Platinum American Express Card