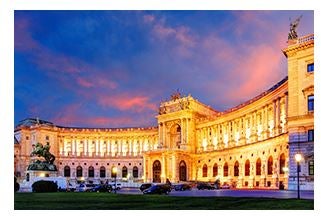 2X United Miles EWR-VIE, 25% Transfer Bonus to Avios & More
This post contains references to products from one or more of our advertisers. We may receive compensation when you click on links to those products. Terms apply to the offers listed on this page. For an explanation of our Advertising Policy, visit this page.

Here’s a recap of the top points and miles news from this week:

Reminder: US Airways Share Bonus Back with New Terms: US Airways has again launched a 100% Share Miles Bonus through June 30, 2014; however, the terms are slightly different this time around. Normally, the Dividend Miles member who received the miles would get the 100% bonus, but now the bonus is split: the sender will get 50% and the recipient will get 50%. The maximum number of bonus miles that can be received by one member for this offer is 50,000. Keep in mind that the price to share miles has increased from 1 cent to 1.5 cents per mile. Shared miles also incur a $30 processing fee and a tax recovery charge of 7.5%.

Earn Double United MileagePlus Miles Flying Nonstop Between Newark and Vienna: You can earn 2x United MileagePlus miles for nonstop direct segments between EWR-VIE on paid fares. You must first register for the promotion. The offer is valid on flights purchased between June 13 and September 30, 2014, for travel completed between July 2 and September 30, 2014. The offer is only valid for travel on Austrian Airlines and is not valid on United-marketed codeshare flights operated by other carriers. Make sure to use the promo code TB9M73 when registering.

Convert Hotel Points to Avios and Get a 25% Bonus: British Airways Executive Club is offering a 25% bonus for converting points from six hotel programs to Avios between June 13 and July 13, 2014. Participating hotel partners are Carlson Hotels, Hilton Hotels, Hyatt Hotels & Resorts, Intercontinental Hotel Group, Marriott and Shangri-La (keep in mind the standard earning rate for points through the hotel loyalty programs varies according to the hotel partner). You must be 18 or over and a British Airways Executive Club Member to convert and get the bonus. These transfers are generally a losing proposition even with the bonus, but could be useful if you need to top up your Avios account for an upcoming award redemption.

Japan Airlines Offers Discounted Awards on LAN: Members of the JAL Mileage Bank (JMB) are eligible for award ticket discounts on LAN flights between June 17 and October 3, 2014. Basically, you could save 5,000 to 10,000 award miles depending on the total travel distance. For example, an award ticket from Los Angeles to Lima normally costs 55,000 miles, but with this promotion would cost only 45,000. Visit the JAL website for more information on standard vs. promotional mileage requirements and to book tickets.

American Airlines to Cut Flights to Venezuela: AA plans to cut nearly 80 percent of its flights to Venezuela in a dispute over revenue being held by the South American country (AA says they have been waiting on $750 million since March). As of July 2,2014, the total number of flights per week will be drastically reduced from 48 to just 10, and those 10 will only depart from Miami, as flights from Dallas, San Juan and New York will no longer operate.

Thai Airways to Devalue Their Award Chart: As of September 1, 2014, new mileage awards will be in effect, making round trips double the price of one way trips in some cases (round trip awards previously cost much less than two one ways). They market it as "simplifying" their award chart, and are also changing Star Alliance awards. Below are links to the current and future award charts so you can compare. If you plan on purchasing an award ticket with Thai Airways, I suggest you do it before September to get the best value.

Additionally, if you are a Platinum or Gold member you get:

This promotion is valid at the following resorts:

The offer is valid for reservations made by October 31, 2014 on stays until December 19, 2014. Keep in mind that blackout dates do apply, and are listed in the terms and conditions section. There is no limit to how many bonus miles you can earn with this promotion.

United Adds New Route Houston-Santiago, Chile: United is expanding their service with a new nonstop route between Houston, Texas and Santiago, Chile. The route will fly once per day beginning December 7, 2014. Flight 847 will depart Houston daily at 9:05 p.m. and arrive in Santiago at 9:40 a.m. the next day. Return flight 846 will depart Santiago daily at 10:45 p.m. and arrive in Houston at 5:40 a.m. the following day. (All times are local.) Tickets are available now for booking, and the route is rumored to have a lot of award space available.
[card card-name='Chase Sapphire Preferred® Card' card-id='22125056' type='javascript' bullet-id='1']