One of the ‘must visits’ on our trip to Paris wasn’t a trip to a high-end clothing store or a top-rated restaurant, it was a date with a mouse.  Of course this was not just any mouse, this was Mickey Mouse at Disneyland Paris.  After making these plans, I quickly realized that people either found taking the time in Paris to visit Disneyland awesome, or the worst idea since week-old leftover egg sandwiches.  If I’m being honest, I very likely would not have planned to visit Disneyland Paris were it not for my four-year-old, but it actually turned out to be a very good experience.

Getting to Disneyland Paris

Since I was a Paris first-timer who was traveling solo with a young child, I strongly considered booking a service that would pick us up in Paris and drive us to the park.  It seemed to be the path of least resistance, but I ultimately decided against that for two main reasons.  First, I didn’t really want to spend more money than I had to.  And most importantly, since we were going on our first full day in Paris (before my mom and aunt arrived) I didn’t want to commit to certain arrival and departure times to Disney.  One of the key pieces of advice in dealing with jet lag and kids is to not schedule anything with a definite schedule in the mornings, especially the first few days.

Once I ruled out some sort of bus, van, or car to go to Disneyland, we arrived at the solution of taking the RER train.  Here is a good blog post on the mechanics of taking the RER to Disneyland Paris.  From the Park Hyatt Paris Vendome my daughter and I walked to the Auber station which was roughly a 12 minute walk away. To purchase the train tickets we just went to the manned kiosk at Auber as the machine was a bit confusing for this Paris novice.  I had written out the station I was trying to get to (Marne La Vallée–Chessy) in case there was a language barrier when trying to buy the ticket.  I simply showed that station name to the attendant and pointed to my daughter and myself and voila, two tickets were in my hand.  My chip and signature Chase Sapphire Preferred® Card worked just fine to buy the train tickets from the manned kiosk.  It also coded 2x as a travel expense.

Following the signs to the platform was pretty simple, and the train itself was clean and efficient.  I highly recommend using this way to Disneyland Paris as it took about 45 minutes, was inexpensive, and was pretty easy.

Given how expensive virtually everything is in Paris, I found tickets to Disnelyand Paris to be quite reasonable.  Of course they were not inexpensive, but they were less than a day at Disneyland in the United States.  You can buy tickets online ahead of time here for a 10% discount, or there are ways to buy them at a discount in Paris.  For example, when we went on our boat cruise on the Seine we saw discount tickets available at a booth there for less than we paid at Disneyland.  Ultimately we did not buy tickets in advance as I was not 100% sure we would make it to the park, and didn’t want money already spent to play into our decisions.  I wasn’t sure how tired my kid would be, what the weather would be like, etc. so opted to pay a bit more by buying at the gate in order to avoid feeling pressured to go if it didn’t work out. 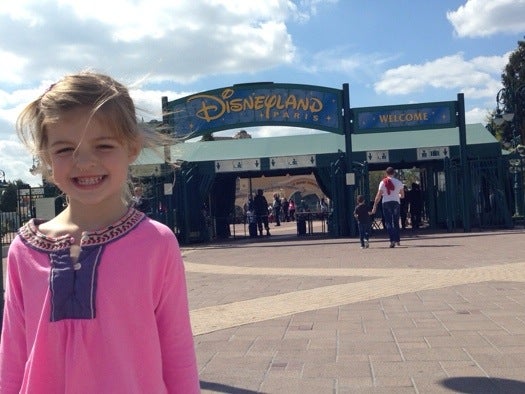 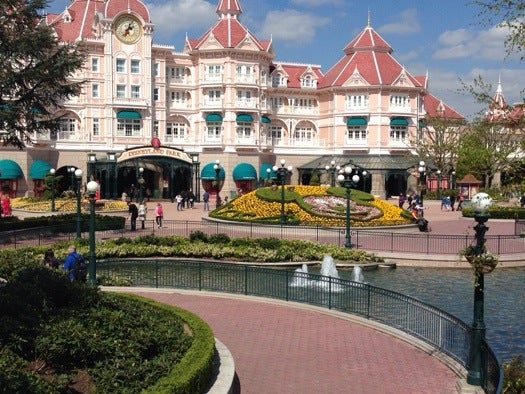 We did opt to buy tickets to just one park as opposed to getting their version of a park hopper that gets you into both Disneyland and the adjacent Walt Disney Studios.  If you went from open to close, used FastPasses, and had a very energetic crew you could conceivably visit both parks one day.  However, if you aren’t doing an open to close sort of day and/or have young kids in your party, then one park is probably plenty for a one day trip.  One thing to keep in mind is that the parks don’t open very early unless you have “extra magic hours”.  Both parks seem to commonly open around 10AM, but check the times for your dates to be sure.  They also offer a VIP FastPass option that seems to allow you to have access to unlimited FastPasses for either an additional fee or as a guest of select hotels.

Disneyland Paris is both similar to the Magic Kingdom parks in the United States, while at the same time a bit different.  It is divided into five lands: Main Street USA, Frontierland, Adventureland, Discoveryland, Fantasyland and has many of the same attractions you have seen in the US parks such as: Big Thunder Mountain Rail Road, It’s a Small World, Pirates of the Caribbean, Buzz Lightyear Laser Blast, and Space Mountain (Mission 2).  However, some of the attractions are a bit difference than their American counterparts, and the overall feel of the park was certainly different. 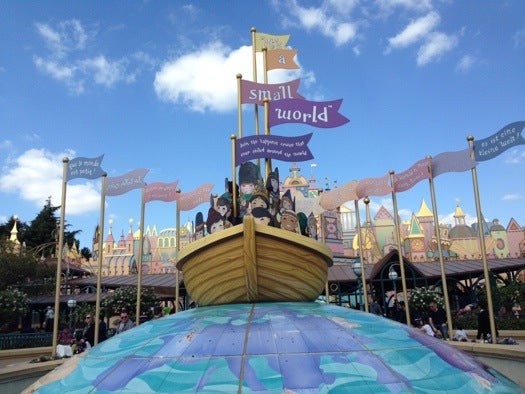 For the most part, Disneyland Paris didn’t have any brand new attractions, but instead had many of the ‘classics’.  For example, we rode the original Star Tours ride that has been gone in the US parks for several years now. 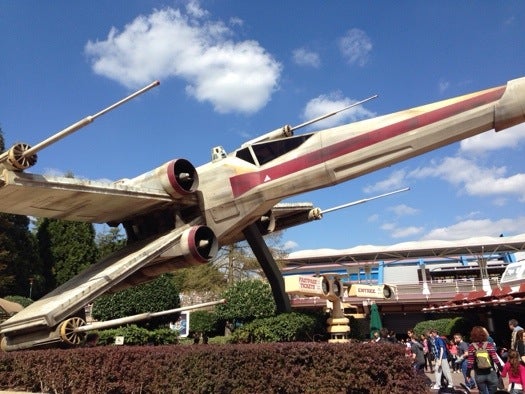 We also offer really cute rides and timeless attractions such as Alice’s Curious Labyrinth, Casey Jr. Circus Train (le Petit Train du Cirque), and the Storybook Canal Ride (Le Pays des Contes de Fées).  These aren’t thrill rides, but they are rides that made us smile and felt like what Disnelyand in California must have felt like decades ago. 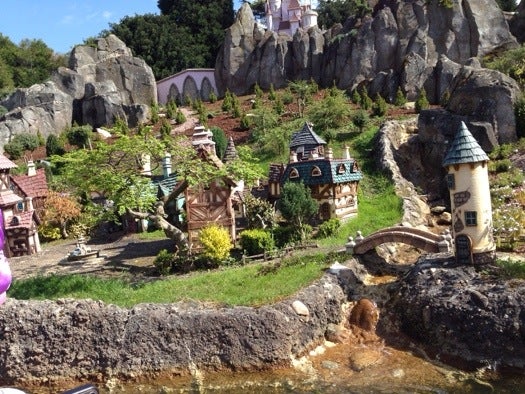 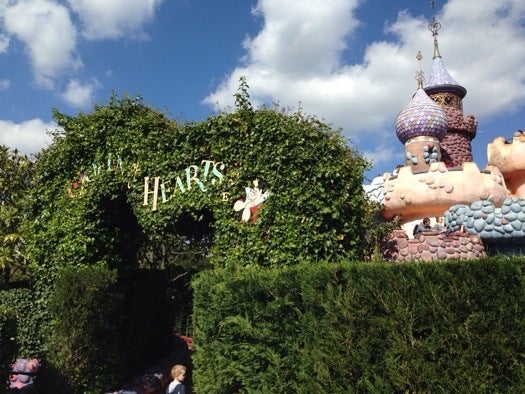 In fact, the park in general feels like what Disneyland might have felt like “once upon a time”.  The lines weren’t too bad, there weren’t folks with fanny packs running from one ride to the next, and it didn’t feel overwhelming.  It felt calm, folks were dressed up (compared to the US parks), the lines were manageable, and it felt like something you might do for an afternoon rather than something you do non-stop for days on end.  The park was also just beautiful, with my favorite Disney castle yet….

We rented a stroller for the day, which was money well spent.  We didn’t need a stroller in Paris in general, but it was very much needed for our one day at Disnelyand!  It was also much better quality than the hard plastic strollers we have rented in the past at Disney World in Florida. 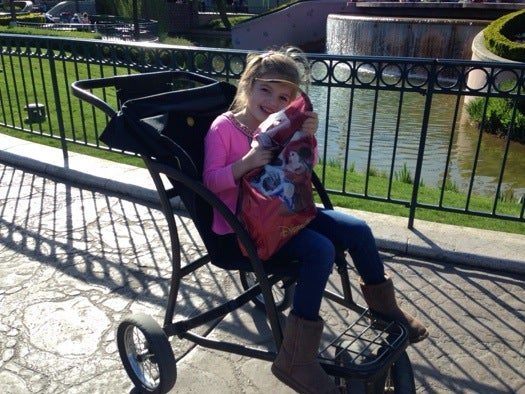 As an added bonus, she was able to stand on the stroller to see when we rolled up on a parade – that had Elsa and Anna in it! 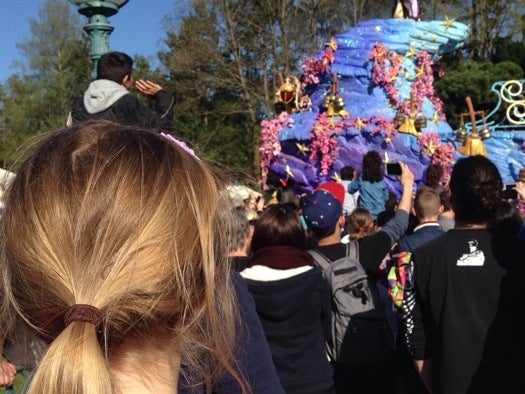 If you want new and technologically advanced rides then Disneyland Paris may be a bit of a let-down.  You will be somewhat better served at the Walt Disney Studios next door, as they have things like the Tower of Terror and are opening the brand new Ratatouille: The Adventure this summer, but Disneyland Paris was perfect for my four year old and myself.  We were able to manage the park with only the two of us just fine, and had a great afternoon together at Disney. 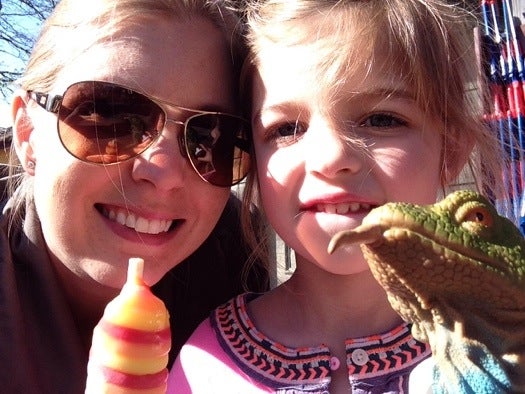 The weather was beautiful, the rides were classic, the lines were short, and the smiles were big.  All in all, I call that a great success!

Summer Hull aka Mommy Points, ran the Mommy Points site for families who want to travel more for less using miles and points for seven years and now heads up TPG Family when she isn't exploring the world with her own two girls.
You might like
Prince Harry flies British Airways to London ahead of Prince Philip’s funeral
News
17m ago
French Polynesia will reopen to international travelers on May 1
News
1h ago
How to save up to 7,500 miles on American Airlines award flights this summer
News
2h ago
Chase Sapphire Preferred® Card