Flying in Lufthansa First Class on the A380 (Frankfurt – Houston)

My four nights in Norway went by in a white flash of snow, and before we knew it, the time had come to wake-up at 4AM to start the journey home.  My friend and I were taking different routes back to the US, so we said our goodbyes at the Oslo airport and I headed toward my intra-European Lufthansa flight from Oslo to Frankfurt and she headed home via Amsterdam  While I was certainly excited to be heading home to my family, I have to admit I was also excited about the Lufthansa First class flight home that awaited me in Frankfurt.  While trips are about the destination for me, having the journey be pretty spectacular doesn’t hurt one bit.  I would never be able to afford Lufthansa first class with money, but I was able to afford it with “just” 135,000 United miles round trip before the recent devaluation.

After my flight from Oslo to Frankfurt, I was driven from the plane to the terminal where I spent a couple of hours at the Lufthansa First Class Lounge.  My flight to Houston had a delay due to mechanical problems with the A380 that ultimately necessitated swapping aircraft for another A380 that then had to be cleaned and catered.  Killing some extra time (and getting some work done) in the First Class Lounge was a great way to spend the delay, and the agents in the lounge kept me very much in the loop on the happenings.
Once the substitute aircraft was ready, myself and another first class passenger were taken down the elevator and into an awaiting vehicle that drove us right up to our plane.  On the way, we got to drive by lots of gorgeous Lufthansa planes that were all lined up ready to take flight. 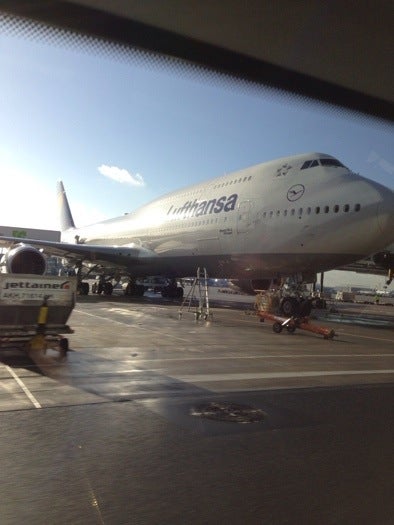 Once we finished the brief drive to the plane, we went up an elevator and then walked across the jet-bridge to the awaiting plane. 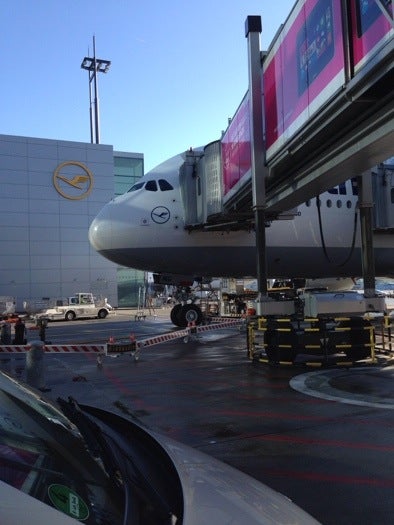 Upon entering the aircraft, you get to turn left to enter the first class cabin.  I didn’t see a single coach or business class passenger on the flight, which is a bit strange, but does make for a very easy boarding process.  On the A380s you have your own locker where you can store your bag and clothing once you change into the provided pajamas.  I love this as I found the storage on the A340 I flew on the outbound to be very limited. 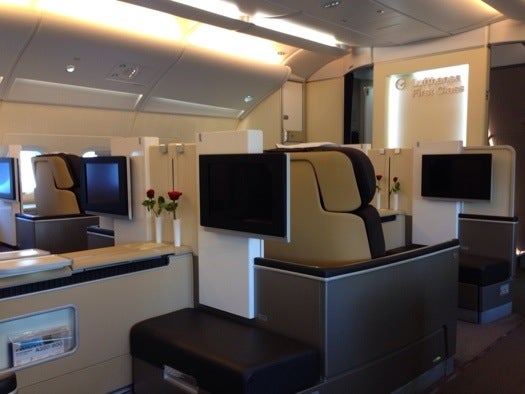 Shortly after boarding the purser introduced himself and personally apologized to each first class passenger for the delay.  He also offered pre-departure drinks as he greeted each person.  He was extraordinary friendly and professional and had the biggest smile on his face every time I saw him.  The cabin only had 5 of the 8 seats full, so the service was very prompt for the duration of the flight.  Before take-off I was given my pajamas and hard case Rimowa amenity kit.  It was a different color than the one provided on the outbound flight but otherwise had the same contents (yay one for me and one for my husband!).

I had flown in Lufthansa First on the A380 once before, and loved it then as much as I did this time.  The cabin is quite large and airy.  The seats are the new first class seats, and in addition to the locker storage space, there is also space to store things such as a purse in the foot rest. 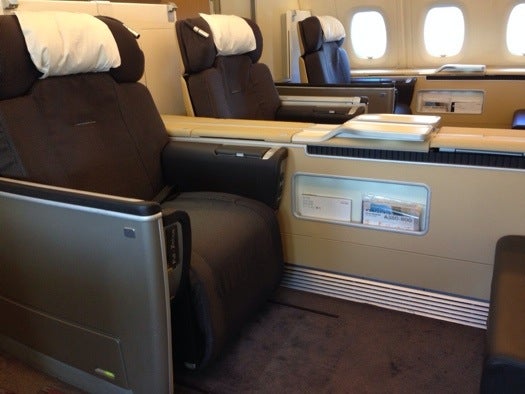 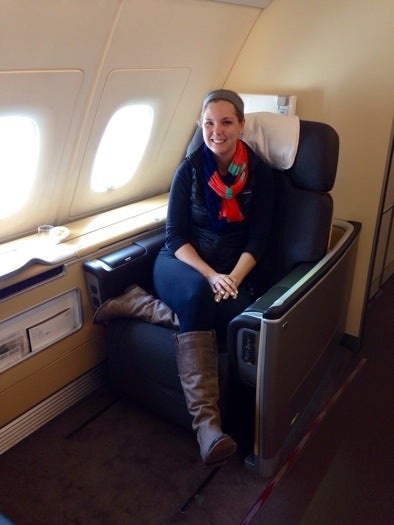 In addition to the lockers, another feature I love in first on the A380 is the huge (by airplane standards) bathroom.  You are able to change clothes, clean up, etc. in there without hitting the walls or feeling too cramped.  If I was traveling with my daughter, having the space in this lavatory would be a dream come true for “potty breaks”! 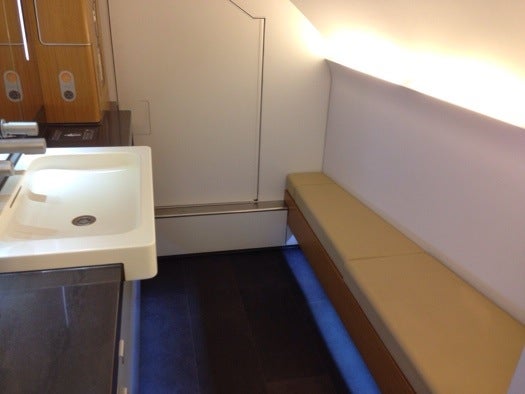 I also love all the toiletries they have like make-up removing cloths, toothpaste, toothbrushes, and more.  You get much of that in the amenity kits, but it’s good to know you can get more if you want/need it.

Lunch service began on this daytime flight back to the US about 30 minutes after departure.  First we were given a “special” appetizer from the kitchen. 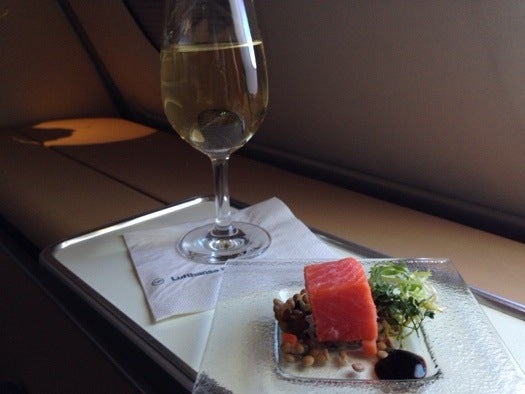 Next came the breads, caviar, and your choice of the appetizer selections from the menu.  You seriously do not go hungry on these flights. 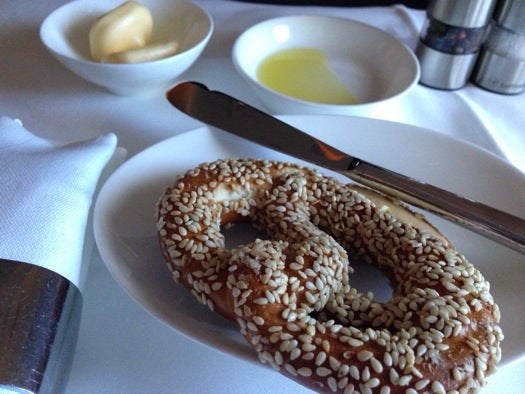 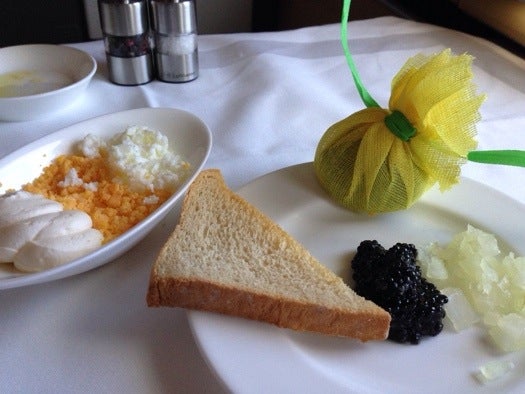 I opted for the scallops, prawns, and leaf salad selections from the appetizers (listed below).  I probably could have done without the pretzel just because there was already so much food, but otherwise the caviar and appetizers were all pretty enjoyable.  The salad was quite simple, but greens sounded really good after a trip to Norway where we didn’t see or eat many green veggies. 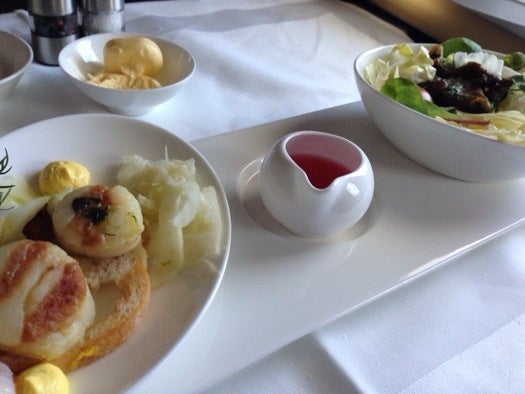 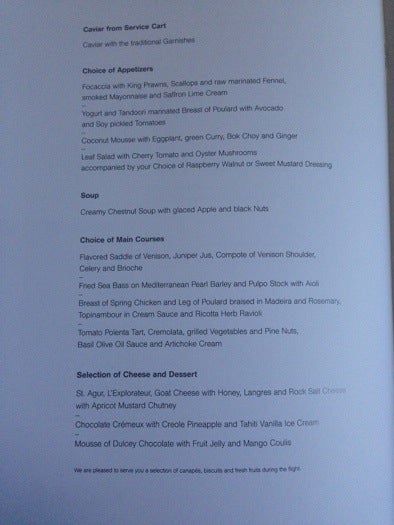 For the main course I opted for the tomato polenta tart with grilled vegetables.  For airplane food it was amazing, but that is grading on a curve for being in the sky.  It’s not something I would necessarily order every day in a restaurant, but I was pleasantly stuffed after the main course. 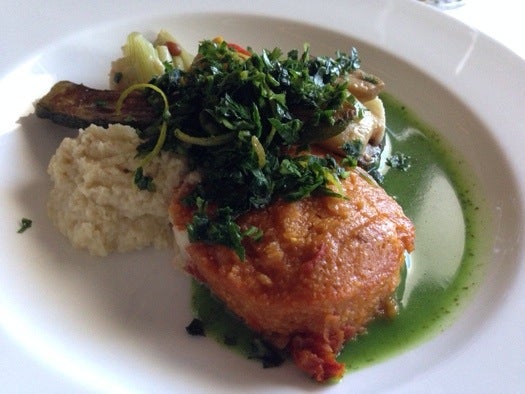 ….though that doesn’t exempt you from at least trying a dessert.  I had a little bit of the chocolate mango mousse and couldn’t complain one bit. 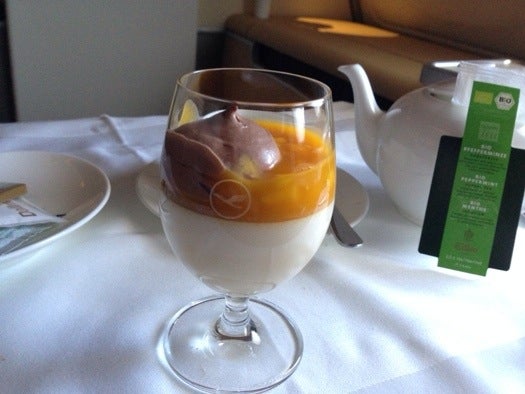 As I wanted my pants to not totally burst from stomach expansion, I passed on any cheese or port from the tempting cart they rolled by.

I really like flying Lufthansa, but their inflight movie selection does start to run thin before too long.  I watched my top picks on the outbound flight, so on the return had to move on to my second tier selections like “Runner, Runner”, “Snow Babies”, and “New Girl” episodes.  If you were flying with a little one they do have kids movies, such as Planes, but I can imagine the kid friendly library would run out even faster than the adult options, so plan accordingly unless your kiddo doesn’t mind watching the same thing a couple times. 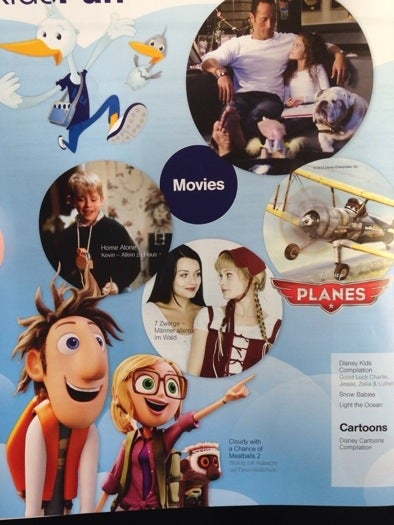 One thing that doesn’t get old (for me) is watching the cameras they have mounted on the plane or looking outside.  We took an extremely polar route to get home, and consequently there were some pretty cool views out of the windows! 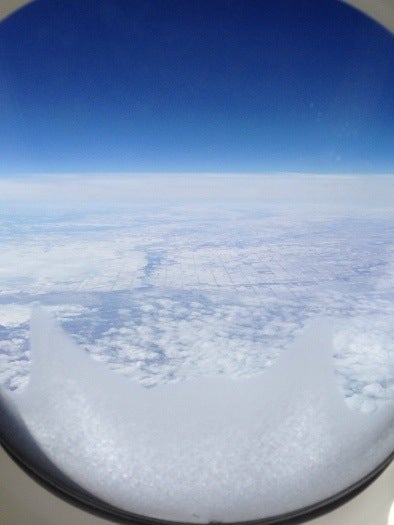 The most important thing to me on a flight is sleep, and the Lufthansa crew magically turned my seat into a bed when I went to change into pajamas shortly after the meal service ended.  I didn’t want to sleep the whole way home, but getting a few hours of sleep was much appreciated, and a great way to pass the time.  I find the beds to be quite comfortable, and with the cabin dimmed it makes for very easy sleeping. 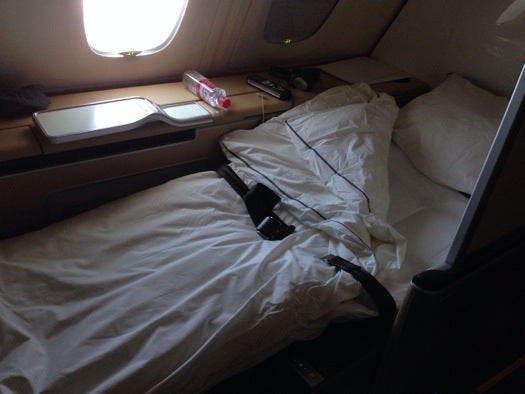 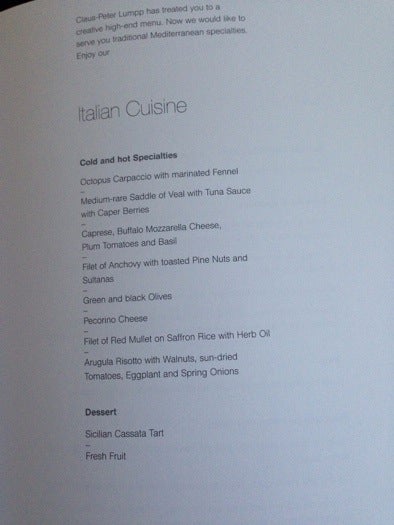 This time the courses had a more Italian flare, and I tried to learn from my previous over-stuffing by not ordering one of everything on this go round.  The fresh fruits and tomato were my personal favorites from this round just because they were a bit lighter than some of the stuff I had been filling up on.  Pace yourself when eating on international first class flights – sometimes the food just keeps coming and it is hard to say no.  The same can be quite true with the drinks – consider yourself warned! 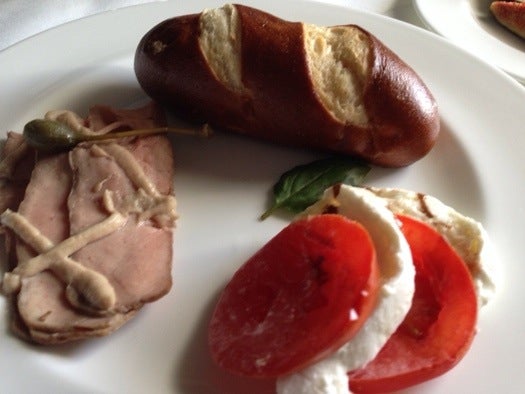 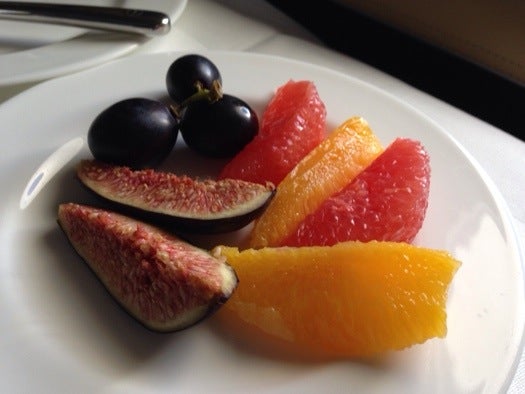 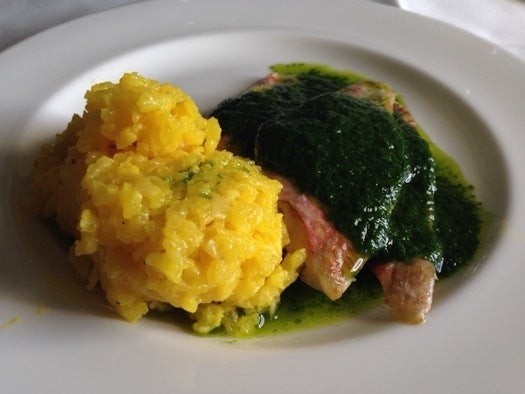 After Meal #2 there was just enough time to finish watching a competitive figure skating documentary (I was now on my third tier film choices) and then we were landing in Houston.  I thought the flight was the perfect length of time to rest, eat (twice), watch some shows, and have time to soak the experience in before transforming back into my normal life. 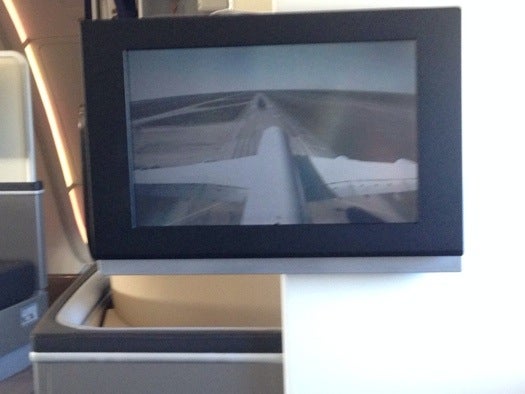 I will add that once we landed at the airport, the magic of Lufthansa First Class wasn’t totally over….I got through passport control in a flash thanks to Global Entry and yet my checked bag (and the other first class bags) were already out and waiting with a Lufthansa rep when I got to baggage claim mere minutes after the plane landed.  It was a nice touch to end a great flight.

Lufthansa First Class redemptions now cost a ton via United miles, but I hope fly one of these flights again at some point via United, Lufthansa, LifeMiles, or some other Star Alliance miles.

Sign up for our daily newsletter
Summer Hull aka Mommy Points, ran the Mommy Points site for families who want to travel more for less using miles and points for seven years and now heads up TPG Family when she isn't exploring the world with her own two girls.
You might like
Get up to a 60% bonus when buying JetBlue points
News
2h ago
Delta Air Lines will shrink its European footprint after coronavirus
News
3h ago
United will restore lie-flat seats to its premium transcon flights
News
4h ago
Chase Sapphire Preferred® Card