Cheap American, Delta and Aerolineas Business Class Fares Miami and New York to Buenos Aires For $1,645 in April - May 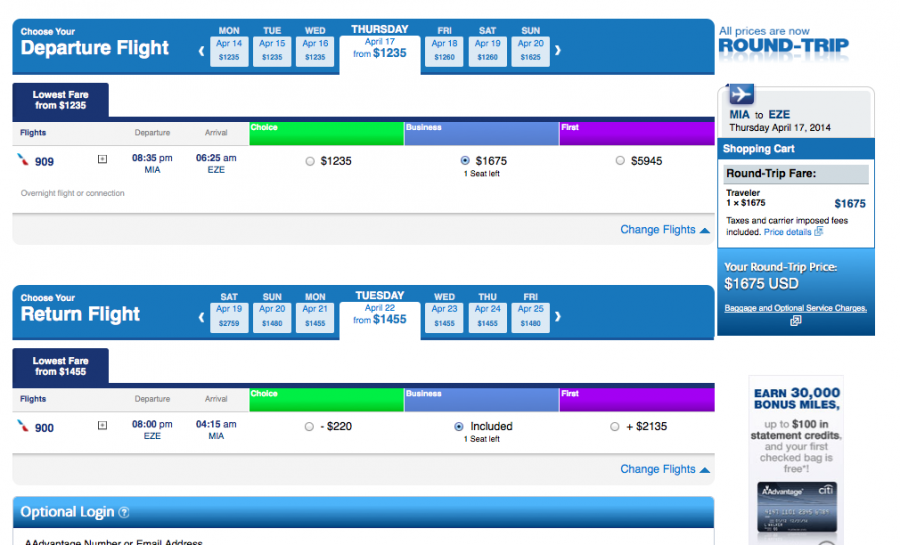 Cheap American, Delta and Aerolineas Business Class Fares Miami and New York to Buenos Aires For $1,645 in April - May
This post contains references to products from one or more of our advertisers. We may receive compensation when you click on links to those products. Terms apply to the offers listed on this page. For an explanation of our Advertising Policy, visit this page.

In the past couple months there have been some limited-time low fare deals to South America, and today, some great business class fares on American Airlines and Aerolineas Argentinas popped up for flights from New York JFK for as low as $1,510, and from Miami as low as $1,675 roundtrip. That's still pricy for some, but considering fares on these routes usually go for around $4,000-$5,000, this is practically a steal.

The only thing I can find that they seem to have in common is that you must stay over a weekend and return on either a Wednesday or Friday. A quick search on the ITA Matrix shows that these fares are available from New York JFK starting now and available throughout the summer and through November, with prices going up to $1,645 in December and January.

The lowest fares involve a two-stop itinerary in Bogota and Lima on Avianca:

So personally, I'd be willing to spend another $150 or so to fly non-stop on either Aerolineas Argentinas or American.

Low fares are available from Miami from April 14 through the end of May and the only condition I can seem to find is that you have a Sunday night stay over.

And are pricing out on American and Aerolineas.

Remember, though, you can't actually book tickets through the ITA Matrix, so you have to go to the airline site or an OTA like Orbitz in order to book. However, when I went to AA.com, the fares were pricing out correctly as in this MIA-EZE example:

These flights are booking into the I business fare class. On American, that means you earn 100% elite-qualifying miles plus a 25% mileage bonus, and 1.5 elite-qualifying points per mile flown (which is a nice bonus if you tend to qualify for status on points with American). The mileage roundtrip from JFK-EZE is 10,262, so you'd be earning 15,393 EQP's on a roundtrip - that's 15% of the way to Executive Platinum status, and over 2/3's of the way to AAdvantage Gold.

With Aerolineas - if you wanted to bank to Delta, there are a few things to consider. First, I class on Aerolineas will only earn you 75% Medallion Qualifying Miles. Second, remember to earn Medallion Qualifying Dollars you need to purchase the airfare through Delta, so you can't do that online but would have to call instead. The good news is, Delta is actually offering fares at just about the same price, though you have to route through ATL if departing Miami:

So you might just want to do that instead if you don't mind an extra stop through Atlanta. If I were flying Delta, I might want to do that anyway since the airline uses a 767-300 on the route with fully lie-flat Business Elite seats in a 1 x 2 x 1 configuration, which a lot of people (myself included) would prefer to the old 777 business class American flies on this route with angled lie-flat seats in a 2 x 3 x 2 configuration.

Unfortunately, Delta doesn't seem to be price matching the JFK fares just yet, but if Aerolineas and American keep their fares on that route low, then maybe Delta will match them soon.

I only found these low fares from MIA and JFK so far, but if you find them from any other US origins, please share in the comments below! Hat tip: The Flight Deal.
[card card-name='Chase Sapphire Preferred® Card' card-id='22125056' type='javascript' bullet-id='1']